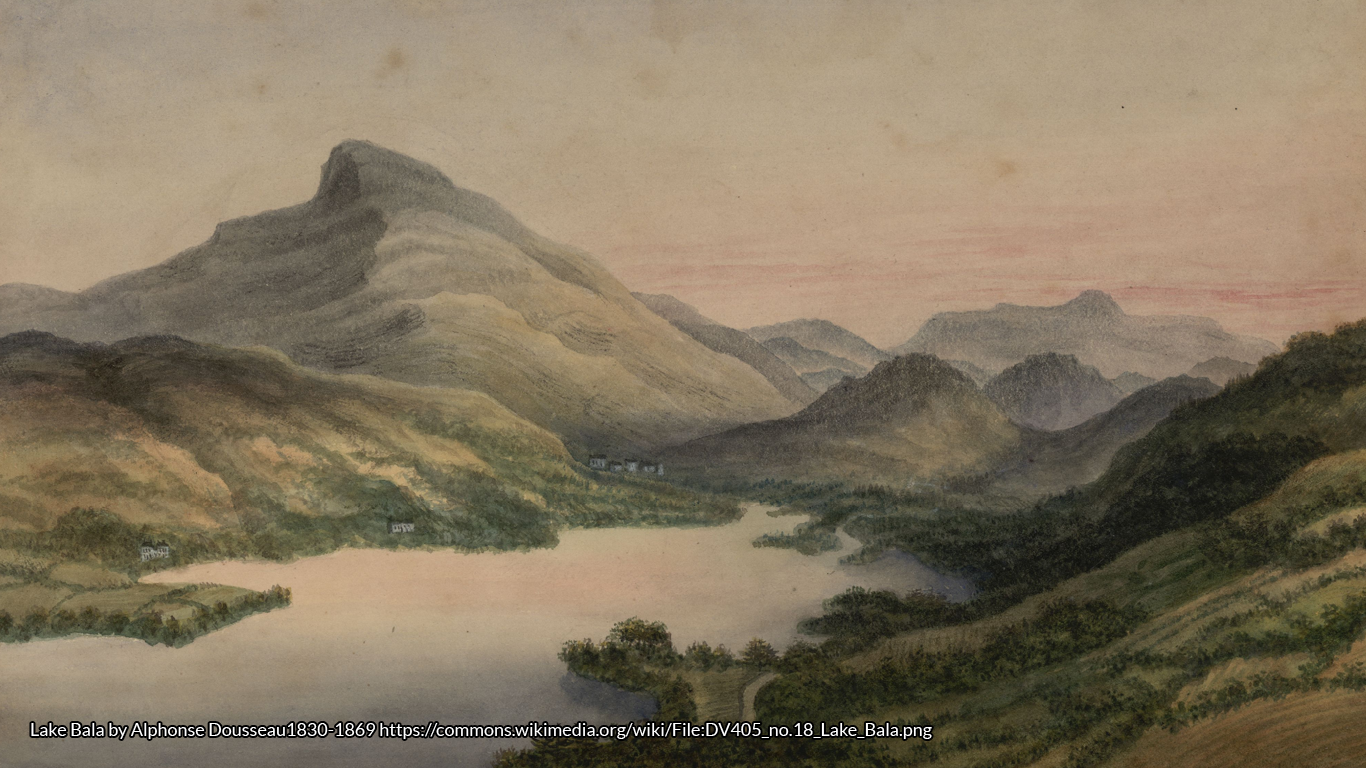 Lake Bala is also known as Llyn Tegid, and in Welsh folklore is known for its legend of having a sunken town beneath its surface.  It is situated in Gwynedd, Wales, and the modern day town of Bala lies on its eastern shore.  There are two different legends that give different accounts of how the flooding took place.  One concerns the spring of Ffynnon Gower or Gower’s Well, and the other involves the wickedness of a prince named Tegid Foel.  This article looks at the legend of Tegid Foel.

The Legend of Tegid Foel

According to legend, Tegid Foel had a fine palace in the town now underneath Lake Bala and lived a life of opulence and excess.  He had a reputation for cruelty and greed, and oppressed his people.  The gods had sent several warnings and provided opportunities for him to change his ways, but still he unheedingly persisted in his greed and excesses.

When his first grandson was born, he decided he would celebrate the birth with a lavish feast.  He sent invitations to all the important princes in Wales and beyond, and invited all of his family to join him in the banquet at his palace in Bala.  Now, they say a man is known by the company he keeps, and there were many who would not attend the celebration because they refused to associate with this cruel and barbaric prince.  Sadly, like attracts like and the banquet was still attended by many powerful men of ill repute and behaviour.

The Harpist and the Little Bird

Tegid Foel had employed the best harpist in Wales to entertain his guests. While he sang his songs and played his harp, the wine flowed and the guests indulged in all sorts of excesses barely taking any notice of him.  Nevertheless, he was a professional and had been paid very well so he continued.  Strangely, as he played, he thought he heard a quiet voice behind him whispering in his ear.  It seemed to be trying to tell him something, but he could not quite make out what and he carried on playing and singing.  It happened several times, and he suddenly realized that the voice was saying “vengeance will come!”

This startled him, and he looked behind him and there perched on an open window was a small bird looking at him intently. “Vengeance will come!” chirped the bird, still looking at the harpist directly. It seemed that the bird was motioning for him to follow. The harpist thought it was about time he took a break, so carefully setting down his harp he went outside and found the bird waiting for him by the door. Again, the bird motioned to him, so he followed it up a path to the hillside overlooking the town of Bala in the valley below. The bird flitted to the ground and again motioned to the harpist, so he sat down beside it. The bird then sang the most beautiful song the harpist had ever heard, and he soon fell asleep listening to it.

When the harpist awoke, he looked out from the hillside but was astounded to see the landscape had changed.  The valley was now full of water, and the town of Bala was nowhere to be seen. Floating on the water close to the shore of the new lake the harpist saw his harp. Wading into the cold water, he managed to retrieve it and looked around for the little bird that had saved his life but no sign of it could be seen. Although the harpist could not see the bird, he called out his thanks and made his way home very grateful to be alive and much relieved for the safe return of his harp. He realized that higher powers had been involved in the flooding of the town and the saving of his life, and gave thanks to them by dedicating his singing and playing to them. Tegid Foel and the wicked ones who had perished under the water had brought it upon themselves, and paid the price of their wickedness. The few who survived built new a town on the shores of the lake, which grew through the ages into the modern town we see today.

According to tradition and folklore, there are nights when the lights of the palace and the town that surrounded it can be seen underneath the lake’s surface, and a small voice can be heard floating across the water saying “vengeance will come, vengeance will come!” Legend says that those bold enough to ask when it will come will be told “in the third generation, in the third generation!”

Similar legends of drowned towns or sunken cities are attached to other Welsh lakes and sites around the coastline. For example, there is Kenfig Pool in Glamorgan and the submerged land of Tyno Helig in Conwy Bay, both having the motif of vengeance arriving in later generations and a similar chain of circumstances that led up to the drowning event. A point worth bearing in mind is that whilst Lake Bala is called Llyn Tegid in the Welsh language, the word “bala” is believed to be older than the Welsh language. It is thought to originate with the Celts from Europe and Asia Minor, and to have been spread during the migration of the Celtic people. The term can still be found in use in parts of Romania and southern Russia, and means “a place where a river flows out of a lake.” The River Dee flows in and out of the Lake Bala, so it may refer to this outlet. According to tradition, the river’s waters do not mix with the waters of the lake.

Is it a Warning, or Just a Story?

Was there once a town where Lake Bala now stands?  Is the legend a part of a wider tradition of deluges around the world that punished the wicked and ungodly, or are these simply popular stories that evolved to bring colour and romance to local areas? Or, perhaps they are a warning to make people through the ages consider their behaviour.