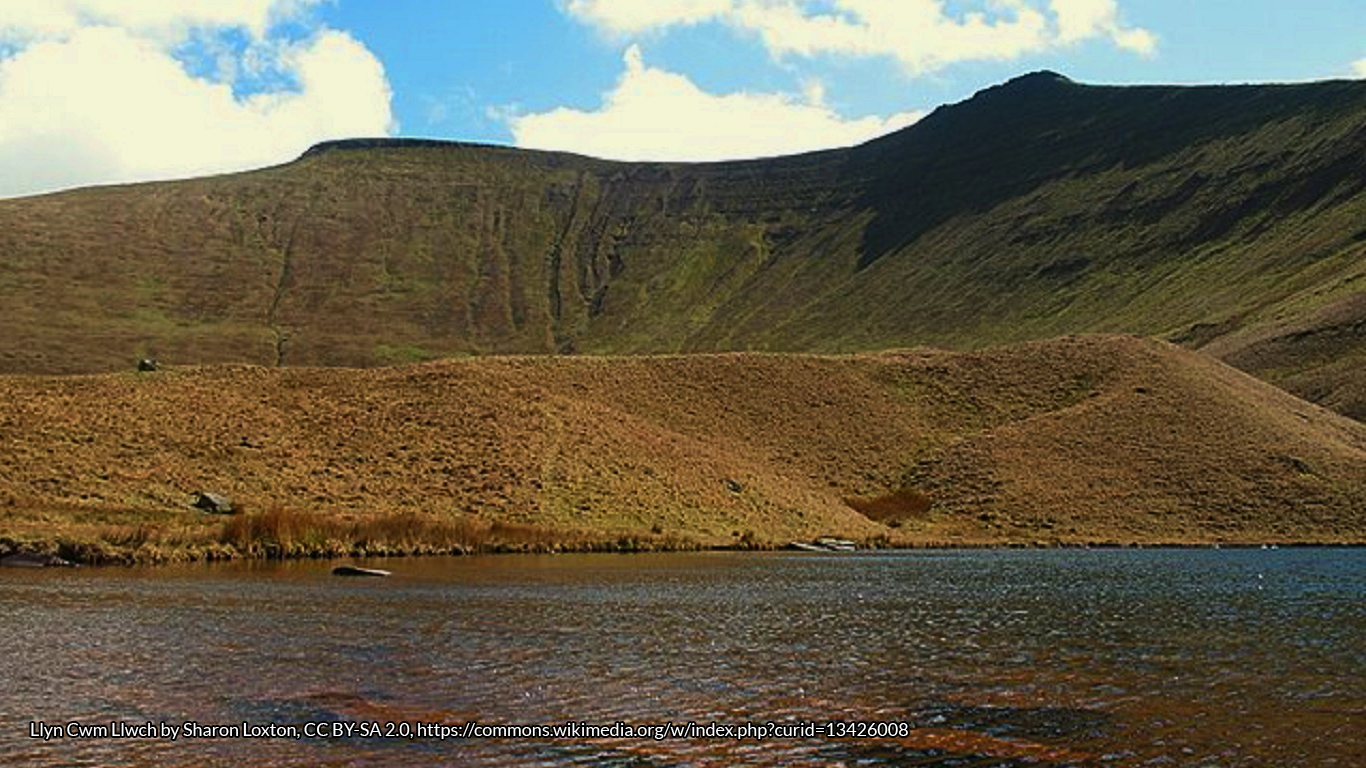 Llyn Cwm Llwch is a small Welsh lake that is situated in the Brecon Beacons of Powys. It is associated with some rather strange legends and folklore, three of which I will discuss. The first of these legends involves a dangerous old woman. The second involves the Tylwyth Teg and an invisible island, and the third tells how an attempt to drain the lake was prevented by some kind of otherworldly guardian who appeared from the lake. He issued a warning, mysteriously invoking the token of the cat as evidence of his powers which told a rather peculiar story about the drowning of an unfortunate feline.

The old woman of the lake was said to prey upon those who were weak-minded, or who had a trusting nature and were easily led such as children. The legend tells that she used music to gain the attention of her victims and to lure them into the water where they were drowned. It may be that she was the Welsh equivalent of Jenny Greenteeth, who appears in English folklore as some kind of dangerous water hag. She may also have been and invention to deter children from playing around the edge of the lake. Whatever she was, her evil ways were motivated by her ambition to regain the beauty of her youth and to gain immortality. Apparently this could only be achieved by luring nine hundred victims into the lake to their deaths.

The Door of the Tylwyth Teg

According to local legend, the lake was the abode of the Tylwyth Teg, or the Fair Folk, who had a garden on an invisible island in the lake. On May Day every year, it was said that a doorway would appear in a rock by the lakeside. Those humans who were bold enough could pass through it into a passage, which would take them into an enchanted garden situated on the island in the lake. Although visitors to the island could clearly see the shores of the lake, the island and the garden were not visible from the lake’s shore.

Those intrepid souls who ventured through the door and down the passage entered into a paradise, with gorgeous flowers of the most wonderful colours and intoxicating scents. These were visited by brightly-coloured butterflies and dragonflies, and songbirds sang happy songs of peace as they flitted from tree to tree. In this marvellous setting, the Tylwyth Teg treated their guests by providing food and drink the likes of which could not be found on Earth. They then entertained them with songs, music, and wonderful stories to give them an unforgettable experience that would stay with them for the rest of their lives. All the Tylwyth Teg asked of their guests was one thing and one thing only, and it was so simple and reasonable that it had always been readily complied with for years untold. Because of the magical nature of the place, they requested that all who visited should not take with them a single item from the island or garden when they returned through the door.

Now it is a fact that humans have short memories, and the Tylwyth Teg never forget. Ever since they had opened the door to accept visitors to their garden, there had never been a single transgression of this rule. But unfortunately, there came a time when one irresponsible and ungrateful guest decide he wanted something more than just a memory of his wonderful time upon the island. He had noticed that no one was being searched or checked to enforce this rule and so, looking around to make sure no-one saw him, he picked a beautiful flower which did not grow on Earth and hid it in the inside of his jacket pocket. Then, he walked back down the passage and passed through the door. The second he stepped out of the door and placed his foot on earth, all of his senses left him. He fell to walking round backwards in circles and talking nonsense, and lost all ability to reason. He remained in this terrible state until the day he died, which mercifully for him came quickly.

The Tylwyth Teg appeared to ignore the betrayal and took no notice of the man, taking leave of their guests with their usual good manners and courtesy. However, the following May Day the door never appeared. Nor did it appear in the years that followed. To this day, the door to the enchanted garden on the island of the Tylwyth Teg has never been seen again.

With the door not appearing for one century, the local people began to wonder what had become of the Tylwyth Teg. They had not forgotten them, and thought perhaps they had left the lake and moved somewhere else. Many stories and legends remained, telling of the wonderful times when people had visited their enchanted garden on the invisible island in the lake. The more they reminisced, the more exaggerated the stories became. They talked about the treasure of the Tylwyth Teg, and wondered if they had taken it with them. A band of local men got together and formulated a plan to drain the lake in the hope that the treasure of the Tylwyth Teg could be found at the bottom.

Carrying pickaxes, shovels, and spades they gathered at the lake and began work digging a channel to drain the water. As they were about to break through to the lake, thunder rolled and forks of lightning filled the sky causing the men to stop in their tracks. They instantly realised that this was not a normal storm, and was caused by supernatural powers against their action of digging a channel. Terrified, they dropped their tools and froze in fear as the lake came alive. From the centre of the lake, wild waves formed in concentric rings and a huge figure of an old man rose from the lake crying:

“If you disturb my peace,

Be warned that I will drown

The valley of the Usk,

This was followed by a deafening roll of thunder and lightning bolts that leaped out of the sky to strike the ground all around them. The old man towered above them and said in a voice like the thunder itself:

“Remember the token of the cat!”

A terrific thunderclap split the air and lightning crashed upon the mountain, and then the old man disappeared. The men threw themselves on the ground in fear. As the storm slowly subsided, they regained their nerve. Picking themselves up, they gathered in a circle to discuss the terrible events. The old man’s warning seemed perfectly clear, but they were totally perplexed to what he had meant by saying “remember the token of the cat!”

Thomas Sion Rhydderch, an old man who knew the locality well, came forward and told them:

“Many years ago, when I was just a lad, I would bring sheep up to the mountain to graze and a local woman asked a favour of me as I led the sheep up the track.  She gave me a bag and told me that inside was a cat that had grown to be a nuisance to her. She asked me to give it to the lake, as I was on my way there anyway. I told her I would, and when I arrived I tied a large stone to the bag with my garter and gave the cat to the lake as I had been asked. The bag with the cat in it sank straight to the bottom of the lake as you would expect, and I thought no more of it. The next day, I decided I would go fishing on Llyn Syffaddon. When I took the boat out I was astounded to see the bag with the cat still in it, though of course dead, floating in the middle of the lake. The stone was gone, but my garter was still attached to the bag so I knew it to be the same as I had given to Llyn Cwm Llwch. Now, there are no streams that connect the two lakes and they are, as you know, miles distant from each other. I was much astounded and very frightened, and have never told a living soul about this until today.”

The group of men listened in astonishment. After much discussion, they decided there must be some unknown underground connection to Llyn Cwm Llwch and Llyn Syfaddon. They decided that they had been warned that if they attempted to drain Llyn Cwm Llwch, then the much larger Llyn Syfaddon would act in defence of the smaller and flood the town of Brecon and the Usk Valley. They realized that if they were right, then there must be some means of communication between the two bodies of water which they did not understand. To be on the safe side, it was decided that they should abandon their work before something unnatural and completely beyond their control happened. Taking up their tools, they made their way home leaving Llyn Cwm Llwch in peace and so it remains to this day.

Legends of the Lakes of Wales: Thematic Classification and Analysis – By Carles-Enric Fernandez

Welsh folk-lore: a collection of the folk-tales and legends of North Wales; being the prize essay of the national Eisteddfod, 1887”

Under the influence! – Welsh Folklore: Legends of Llyn Cwm Llwch