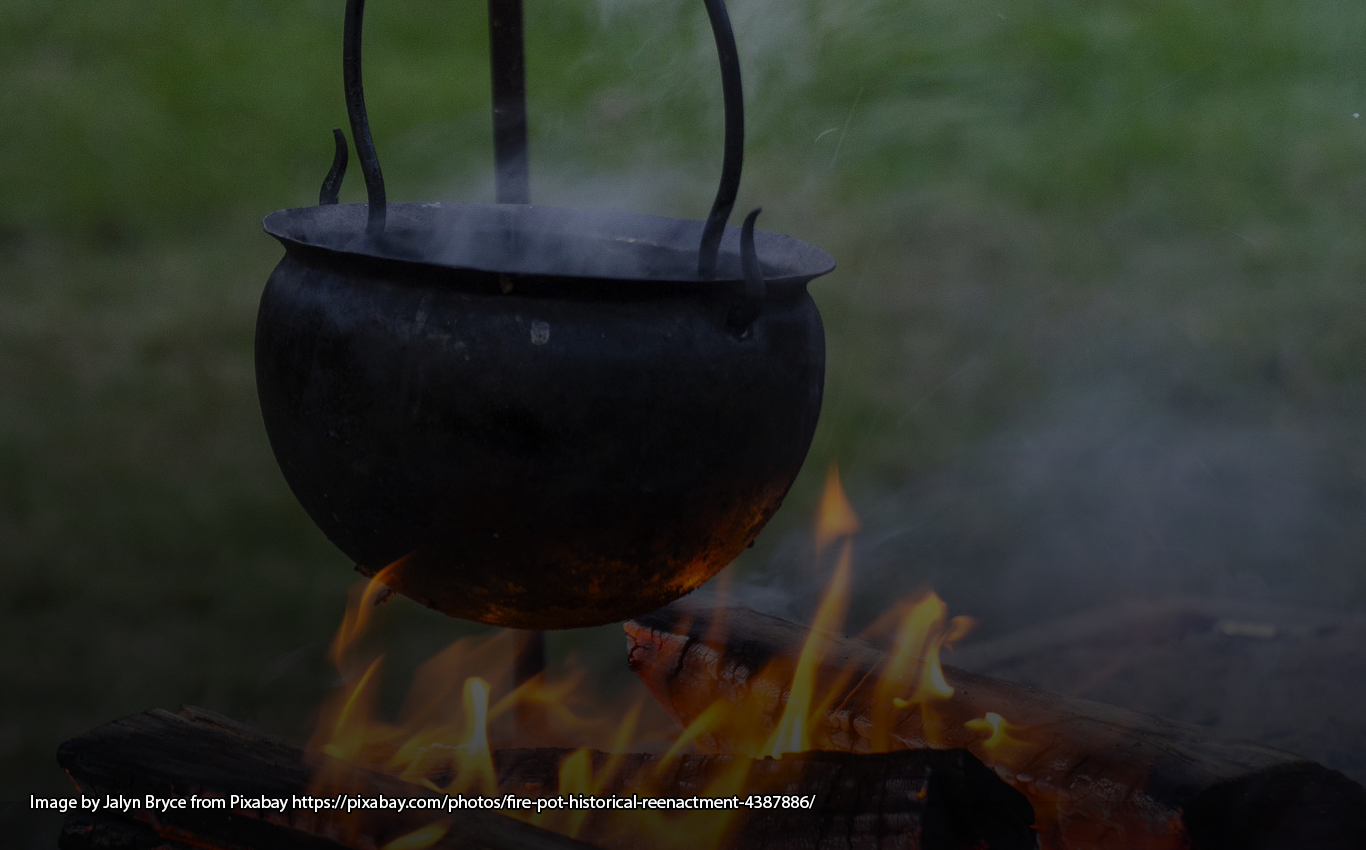 In the ancient mythologies of the Welsh and Irish Celts, the cauldron played an important role in some of their most enduring stories and myths. In these, they were often attributed with magical properties but in the everyday life of the Celts, they were also very useful and versatile utensils. Here we take a brief look at the everyday usage of cauldrons followed by a look at five mythical cauldrons. To conclude we will discuss one real, very ancient and very special cauldron found in a bog in Denmark.

For the Celts, cauldrons had many everyday uses. As well as cooking, boiling, cleaning, bathing, carrying water and other domestic tasks they also had a special place in their religious rites and mythology. As a cauldron was a container for water, the ocean – and possibly some lakes – were thought of as great cauldrons. Sometimes cauldrons were left as votive offerings to the gods in bogs, rivers, and pools.

When a cauldron of water was placed over a fire and filled with water and boiled, its magic could be seen in bubbling action. Whatever was placed into it came out changed. In the Celtic Otherworld, the amount of poetic and artistic inspiration a person received was governed by how they had lived their life. How the water in the cauldron bubbled determined the measure they received.

The Cauldron of Ceridwen

One of their most famous cauldrons was the cauldron of knowledge, inspiration, and rebirt. It belonged to a sorceress named Ceridwen. She used her cauldron to brew a potion that would imbue knowledge and wisdom to whoever drank of it, yet she intended it solely for her son. The concoction had to be boiled and stirred for a year and a day. She tasked a blind man named Morda with the job of feeding the fire, and a boy named Gwion Bach with stirring the brew. Many people see the continuous stirring of the cauldron as blending the attributes of divine wisdom and inspiration with the eternal cycle of life, death, and rebirth to create the perfect brew of existence.

By accident, Gwion imbibed three drops of the brew when they splashed on his hand. Putting his hand to his mouth to ease the pain, he was instantly imbued with wisdom. Knowing Ceridwen would be angry he fled. She chased him, and the two underwent a series of shapeshifting transformations into different animals and birds eventually resulting in him being reborn as Taliesin.

The Dagda’s Cauldron of Plenty

Another famous cauldron was owned by the Irish deity known as the Dagda who was often portrayed as a giant with a long black beard. This was called the Cauldron of Plenty, and was one of the Four Treasures of the Tuatha Dé Danann. The Dagda was an important god of gigantic stature associated with fertility, agriculture, strength, and manliness. He was often portrayed humorously and was believed to control the weather, crops, time, seasons and life and death. Everyone of good character could eat their fill from this cauldron which never ran out. The ladle was said to be so large two men could easily fit into it.

In Welsh mythology, the Pair Dadeni, known as the Cauldron of Rebirth, appears in the second branch of the Mabinogi. It could return the dead to life but without the power of speech. Originally it belonged to Llaes Gyfnewid and his wife Cymydei Cymeinfoll, two giants who had lived under an Irish lake known as the Lake of the Cauldron. She was the larger of the two and said to give birth to a full grown fully armed warrior every six weeks.

King Matholwch, the Irish king, gave them a place at his court, but the two soon fell out with their host who attempted to burn them to death. They managed to escape, and fled across the sea to Wales where they were well received by King Bendigeidfran. In return for his hospitality they gave their cauldron to him.

King Matholwch sailed to Wales asking for the hand of King Bendigeidfran’s sister, Branwen, in marriage. The wedding was agreed by Bendigeidfran and his Branwen but when their half brother, Efnisien, found out he objected and out of spite mutilated the Irish king’s horses. To compensate and appease Matholwch, Bendigeidfran gave him the cauldron. Matholwch returned to Ireland with Branwen, taking the cauldron with him.

However, he still bore a grudge and mistreated Branwen who gave birth to a son named Gwern. The unhappy Branwen tamed a starling and taught it to carry a message across the Irish Sea to her brother in Wales telling him of her plight. On receiving his sister’s message he and his army set sail to rescue her. Bendigeidfran, being of gigantic stature was too big to be carried in a boat. Therefore, striding before them, he led the fleet across the Irish Sea.

On arrival, the Irish made peace with the Welsh and built a massive house big enough to hold Bendigeidfran and all of his army, and a feast in honour was given. Again, Efnysien caused trouble by killing Gwern. This resulted in a violent battle among the Welsh and the Irish. Realising the Irish were using the cauldron to revive their slain warriors, Efnysien placed himself in a pile of their dead and was thrown into the cauldron. Once inside he destroyed it, resulting in his death. Although the Welsh were victorious, King Bendigeidfran was mortally wounded, and ordered his head to be severed. The Irish army was destroyed and only seven of his warriors survived the conflict. Sadly, his sister died of a broken heart.

The Cauldron of Dynwych appears in the list of the Thirteen Treasures of Britain. It has the unusual attribute of being able to distinguish between a brave man and a coward. The meat for a brave man would cook quickly whereas the meat for a coward would never cook. Some scholars think this cauldron may have a connection with a cauldron that appears in the tale of Culhwch and Olwen which was known as the Cauldron of Diwrnach. This tale first appeared complete in the Red Book of Hergest, while earlier fragments appeared in the White Book of Rhydderch. It was included in The Mabinogion compiled by Lady Charlotte Guest.

Diwrnach Wyddel the steward of Odgar son of Aedd, King of Ireland had a magical cauldron. His cauldron was requested by the giant Ysbaddaden to cook the meat for his daughter’s wedding feast as a condition for giving Culhwch permission to marry his daughter Olwen. Culhwch’s kinsman, King Arthur, undertook the task on his behalf, and sailed to Ireland with a company of warriors to request the cauldron. Diwrnach refused to give it up, but one of Arthur’s warriors seized the cauldron. Diwrnach is killed in the fight that ensues, and Arthur and his warriors fight their way back to their ship with the cauldron and return to Britain.

The Gundestrup cauldron is most spectacular of real ancient Celtic cauldrons so far recovered, dated to the Iron Age. It is made of silver and beautifully and intricately decorated with many fine images.  The silversmiths are unknown, but in those days few craftsmen could produce such craftsmanship in silver. They may not even have been Celts, but the best available craftsmen at the time. However, because of the Celtic iconography, it displays it was thought to have been commissioned by an unknown, high-ranking Celt, probably for purely ceremonial purposes. The imagery was believed to express one or more Celtic myths, and possibly display several deities mixed with other images of a different style.

The Importance of Cauldrons

Many scholars think in Celtic times people came together around a cauldron to engage in the enjoyable, sociable activity of eating. The Gundestrup cauldron, being made of silver, was probably not used for cooking on a fire, but may have held pre-cooked food or drink or was purely ceremonial.  After the meal, the bards might provide entertainment by telling stories of their ancestors and their gods. The stories were generally passed on orally through the generations to ordinary folk. However, the images in and around the Gundestrup cauldron may have been a prompt for the storyteller and if they were acted as a simple form of literature for the educated few. Of course, they could simply have been for decoration – and they are very decorative. We will probably never know its original purpose, but the reality of its existence bears witness to the importance the Celtic people saw in cauldrons and expressed in their various mythologies.