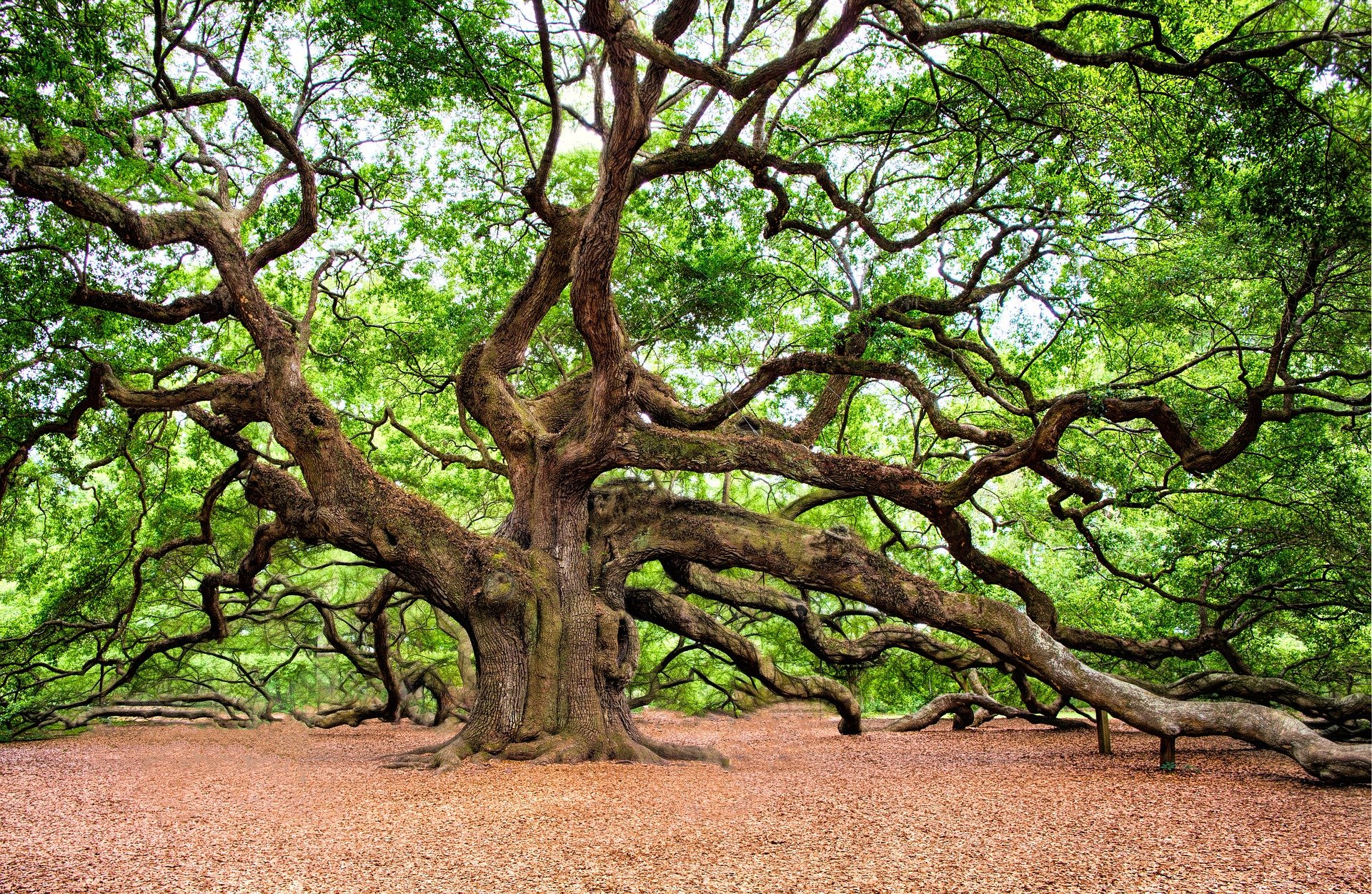 It is believed that the ancient Celtic people were animists who considered all objects to have consciousness of some kind. This included trees, and each species of tree had different properties which might be medicinal, spiritual or symbolic. Of course, wood was also used for everyday needs such as fire wood and making shelters, spears, arrows, staffs and many other items. Trees also supplied nuts and berries for themselves and their animals as food. Some species of tree featured in stories from their myths, legends and folklore and presented here are five trees that played an important role in these tales and lore.

The oak was the king of the forest having many associations throughout the Celtic world with religion, ritual and myth and many practical uses.  For the Druids – the Celtic priesthood – it was an integral part of their rituals and was also used as a meeting place. According to the 1st-century geographer Strabo, Druids in Galatia, Asia Minor, met in a sacred grove of oak trees they named Drunemeton, to perform rituals and conduct other Druidic business.  In 1 CE, Pliny the Elder, writing in Historia Naturalis, documented how a Druidic fertility rite held on the sixth day of the moon involved a Druid cutting mistletoe from the branches of an oak and the ritual sacrifice of two white bulls.

Oaks also played important parts in Welsh mythology. In the Math fab Mathonwy, the last of The Four Branches of the Mabinogi, the sorcerers Gwydion and Math create a maiden they named Blodeuwedd or flower-faced from the blossoms of the oak, the broom and meadowsweet. She was created to be the bride of their nephew, Lleu Llaw Gyffes, who could not marry a human woman due to a curse placed on him by Arianrhod, his mother.  He married Blodeuwedd who never learnt the social conventions never having experienced the learning process of growing up. She had an affair with Gronw Pebyrv and together they plotted to kill Lleu. He was badly wounded by Gronw but turning into an eagle flew into an oak tree to escape being murdered. The oak appeared to be a refuge between the living world and the world of death and he remained there until Gwydion found and cured him.

The ash tree was the queen of the forest. Ash trees have significance in both Irish and Scottish mythology and folklore. It was believed to have been used in the rites of Beltane and formed part of the sacred trinity of trees with the oak and the thorn. Ash wood was thought to protect against fairies and their seed pods were used for divination. The Gaels of Scotland used it for medicine and to protect against witchcraft. Its wood was considered to be especially good for making spears, staffs and wands and was believed to protect against evil. A Druid’s wand made from ash was found on the Welsh island of Anglesey and thought to date from the early 1st century CE.

In Celtic Ireland, five magical trees protected the land and three of these were ash. The remaining two were an oak and a yew. The Bile Tortan, or the Tree of Tortu grew in County Meath at Ard Breccan near Navan.  This tree reputedly sheltered all the men of Tortu and was thought to have come down in AD 600. The Caeb Daithi or the Branching Tree of Daithe grew in County Westmeath at Farbill. The third sacred ash tree was the Craeb Uisnig which grew on the hill of Uisneach which was considered to be the centre point of the island of Ireland.

The apple tree and its fruit had numerous functions in Celtic myth, legend and folklore. Unsurprisingly apples were seen as symbolising fruitfulness and as a means to obtain immortality. In Welsh and Arthurian tradition the Island of Avalon was King Arthur’s final resting place and the home of Morgan le Fay and her sisters. It was also known as the Insula Pomorum, or Isle of Apples. In Irish tradition the magical island of Emain Ablach was also known as the Isle of Apples. In a story from the Ulster Cycle, Aided Chon Roí, or the Violent Death of Cú Roí, tells how the soul of Cú Roí was held in an apple that lay in the stomach of a salmon that only ever appeared once every seven years.

Another Irish tale, the Echtra Condla, or The Adventure of Conle, tells how the eponymous hero, Conle, is given an apple by a strange supernatural woman.  This sustains him from hunger and thirst for one month without diminishing as he eats it but makes him crave to see the woman again. Eventually she returns and takes him in a crystal ship to a happy land full of maidens and women.

Hazel trees provided the Celts with wood and edible nuts and played an important role in Welsh and Irish traditions. The ancient Irish religious centre and seat of kings at Tara was once named Fordruim and was described as a hazel wood. The elite band of warriors and poets known “the Fianna” were expected to be able to defend themselves with no more than a hazel stick and a shield.  In many stories the hazel minus its leaves was believed to drip poison and considered evil.

In Wales and Ireland the hazel was considered a fairy tree. Its wood was sacred to poets and considered inappropriate to use as fuel for fires. Hazel wands were carried by messengers and couriers as badges of office. Witches also made their wands from hazel and hazel rods were and still are used as divining rods to find underground water sources.

In a story from Irish mythology the Salmon of Knowledge was caught by the poet Finn Eces, or Finegas, and eaten by Fionn mac Cumhaill, the mythical Irish hero. The salmon had gained all the knowledge of the world after it had eaten hazelnuts that had dropped into the pool from nine hazel trees that surrounded it.  This knowledge was passed on to Fionn after he ate the salmon.

Yew trees are renowned for their longevity. Scientists use a method called dendrochronology, which examines growth rings to date trees. However, yews are notoriously hard to date because the inside of the tree rots so there is often little remaining of the rings. New techniques have been worked out which may give greater accuracy though these are sometimes contested. Nevertheless, some people believe some yews alive today were growing in Celtic times and maybe earlier.

According to the Woodland Trust, the Fortingall Yew in Perthshire is believed to be between 2,000 and 3,000 years old. Possibly an older tree is the ancient yew in the churchyard of St Cynog’s church in Defynnog which may be up to 5,000 years old. Another yew of similar age grows in the churchyard of St. Digain’s Church in Llangernyw village, known as the Llangernyw Yew. A legend attached to it tells how every Halloween a voice from the tree names each and every one of the local people who will die in the following year. One man named Siôn Ap Rhobert refused to believe this and one Halloween waited under the yew to hear whose names would be called out.  His own name was called and he died within the year.

The Druids were believed to have regarded yews as sacred and would have been aware of their longevity. It also has regenerative qualities which would have interested them. The drooping branches of old yews when in prolonged contact with the ground can take root and form trunks which support the main tree whose core may be rotting. The needles of the yew were poisonous and can cause death. This along with its qualities of longevity and renewal caused it to become associated with both death and resurrection.

Of course those trees mentioned here are just a handful of species that the Celts knew and admired in their time. Like many other human cultures they developed the idea of a Tree of Life, Tree of Knowledge or the World or Cosmic Tree. This special tree connected the other, or under-world to the heavens passing through the earthly world. It was a powerful symbol of the existence of the three worlds and the connections between them. This threefold reminder emphasised the respect and reverence the Celts had for their trees and many people in the modern world are inclined to the belief that we could learn a thing or two from the ancients.