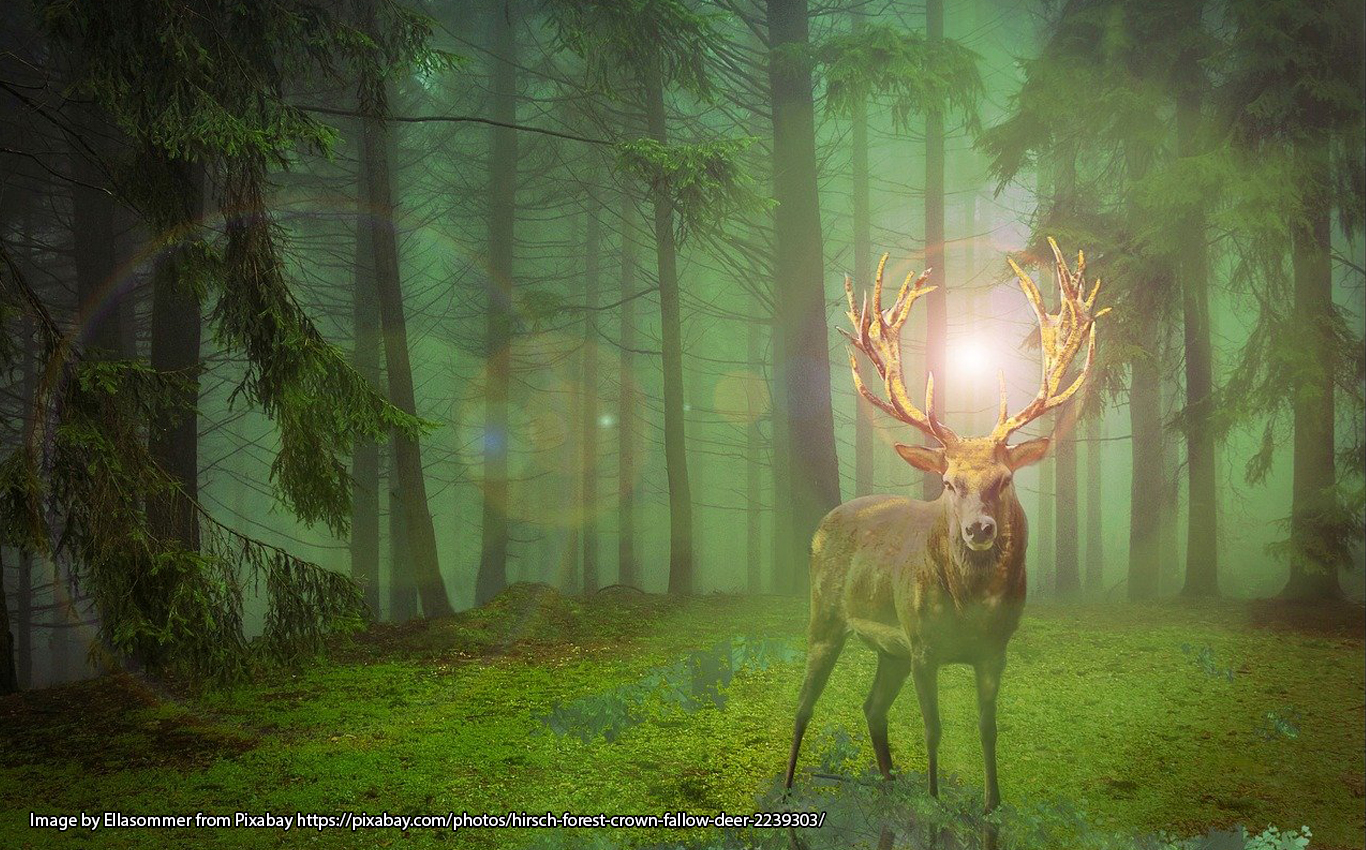 The concept of a magical, mysterious, “Otherworld” has been a common component in many myths and legends of diverse human cultures all around the world throughout history. The ancient Celtic people also had their own ideas of this enigmatic and ethereal region. Their territories included Ireland, the United Kingdom and a swathe of continental Europe, including areas of the Iberian Peninsula and Anatolia. As such there were variations in philosophies concerning this world and the next from region to region.  Presented here is a brief exploration of their idea of the Otherworld and how it appears in different Celtic regions.

The Celtic Otherworld is sometimes presented as the realm where their deities lived, or the place of their dead and sometimes both. Other stories tell of a magical paradise where people enjoyed eternal youth, good health and beauty, living in joy and abundance with all their needs satisfied. It could also be the abode of the fairies, Twylyth Teg, Aos Sí and many other similar magical entities.

Entry to the Otherworld

The Otherworld is usually hidden and difficult to find but certain worthy people manage to reach it through their own efforts. Others may be invited, or escorted by one of its dwellers, or given signs to follow. Sometimes entry is gained through ancient burial mounds or by crossing over, or under, water, such as a river, pool or the sea. There are also special places such as certain lakes, bogs, caves, burial mounds or hills where access to and from the Otherworld can be gained.

Another idea is that the Otherworld exists in a different dimension alongside the earthly one as a kind of mirror-world. At certain times of the year, such as Samhain and Beltane, the veil that separates the two grows thin, or withdraws, making entry and exit easier.

In Welsh mythology the Otherworld is usually called Annwn or Annwfn, but Welsh tradition indicates there were different realms or regions within its bounds.

It is not unusual in Celtic stories for a stag or deer to lead huntsmen into an Otherworldly encounter to become embroiled in its affairs. For example, in the First Branch of the Mabinogi, in the story of “Pwyll, Prince of Dyfed.”, Pwyl encountered a pack of white hunting hounds with red ears that had brought down a stag. He drove off the strange hounds and set his own dogs upon it.

This infuriated the master of the strange pack, who himself had otherworldly attributes. He was dressed in grey and was riding a dappled grey horse and possessed magical powers. Grey and light dappled colouring is also associated with otherworldly beings.

He angrily introduced himself as Arawn, a king of Annwn, expressing his disgust at Pwyll for claiming the stag. To alleviate Arawn’s anger Pwyll agreed to spend one year and one day as him, in an exchange of bodies, with the mission of killing his rival Hafgan, another king of Annwn. This shows there are at least two kingdoms in Annwn, in this story at least.

To reach Annwn, Arawn has first invited him to achieve the task and then escorted him safely through Annwn to his palace.  Pwyll, succeeds in ridding Arawn of his enemy uniting the two otherworldly realms under his kingship.

This exchange of bodies provided Pwyll the perfect opportunity to sleep with Arawn’s beautiful wife, a queen and a representative of a goddess of sovereignty.  She was completely unaware of the exchange and her husband’s arrangement though out the entire year.

However, Pwyll showed his true character behaving impeccably with the other man’s wife choosing not to take advantage and sleep with her. As a representative of the goddess she embodies the land, and in respecting her he respects the land – and what she represents – while maintaining his own integrity as ruler of the land of Dyfed.

Later, a mysterious lady named Rhiannon arrives from the Otherworld, possibly from a different realm from those mentioned earlier. She appears in a most enigmatic style dressed in white and gold and riding sedately upon a shining white horse. Despite being pursued by Pwyll’s servants on his fastest horses, some magic prevents them catching her although she appears to be travelling much slower.  Only when Pwyll gives chase and asks her to stop does she finally reign in allowing him to catch up. She informs him she has come to ask him to marry her and he accepts.

In Irish mythology the Otherworld has many names. It is perhaps best known as Tír na nÓg or “the Land of Youth”. A good account of life in Tír na nÓg comes from the tale of Oisín, and Niamh of the Golden Hair, and there are several versions of this tale.

In this story we see an interesting parallel with the arrival of Rhiannon from the Welsh tale. Like her, Niamh is another otherworldly woman who also appears on a magical white horse proposing marriage to an earthly man. Oisin, who is out hunting deer, accepts and is taken to Tír na nÓg by Naimh, sitting behind her on the magical horse that gallops across the surface of the sea. On arrival he finds it is a paradise and only has to think about his desires for them to become manifest.

However, it is an easy, overindulgent life and Oisin is a man of action. He wishes for the excitement of the hunt, and for several days enjoys the most exciting hunting – but it always ends the same perfect way. The stag provides a thrilling chase before being caught and put to a noble death just before supper as the sun goes down. Instead of cooking venison over a campfire, a luxurious hunting lodge magically appears with a sumptuous banquet ready for the hungry hunters, and feather beds for them to sleep on. The experience lacks the rawness and uncertainty of a real chase.

He becomes bored yearning for danger and combat with a foe. This is granted but the fighting is also magically staged managed. His opponent is an ogre holding a princess prisoner and he must free her. Despite sustaining wounds he is magically healed by Niamh and never in any real danger, as he triumphs over his foe setting the princess free.

He longs to return to Ireland to see his family and friends. Naimh reluctantly grants his wish, loaning him her magical white horse, but warns him he must not touch the soil of Ireland. On his return he finds time has moved on fast since he left. What had only seemed a short stay in Tír na nÓg had been hundreds of years. All his family and friends are dead, and the old gods replaced by Christianity.

Unfortunately, while helping a gang of workmen, he falls from his horse onto the ground. He immediately transforms into an old man and dies – but only after he has related his adventures in Tír na nÓg to Saint Patrick.

On the European continent the Gauls divided the Otherworld into three parts; Albios, Bitu and Dubnos. Albios was the upper world, heaven, or the white world. Bitu was the world of living beings, or the earthly world, while Dubnos was the underworld, lower world, dark world or hell.

The Celts recorded little in writing about their beliefs, and most of what is known comes from non-Celtic sources who may have applied their own interpretations. The Roman poet, Lucan, claimed the druids of Gaul believed that in death, before being reincarnated, or reborn, the soul went to an Otherworld he called Orbis aloha.

The Byzantine scholar Procopius of Caesarea believed the Otherworld of the ancient Gauls, or their land of the dead, lay somewhere west of Britain. The souls of the dead, having left their bodies, travelled to the north western coast of Gaul and took a boat across the sea to Britain. On reaching the British shore their souls visited the homes of local fishermen, who ferried the souls of the dead over the sea to their final destination.

Breton and Galician folklore still contains fragments of these beliefs. In Breton folklore, the ship that carried the dead to the Otherworld was called the Bag Noz. In his book La légende de la mort chez les Bretons Armoricains, Anatole Le Braz describes processions of souls making their way across land to the coast to begin their voyage to the Otherworld.

From these few examples we see that the Celtic Otherworld varied from region to region, and even in individual regions there could be variations in ideas.  Sometimes the Otherworld was portrayed as being magical and enchanted and other times dark and disturbing, just as the earthly world of humans can be at times today.