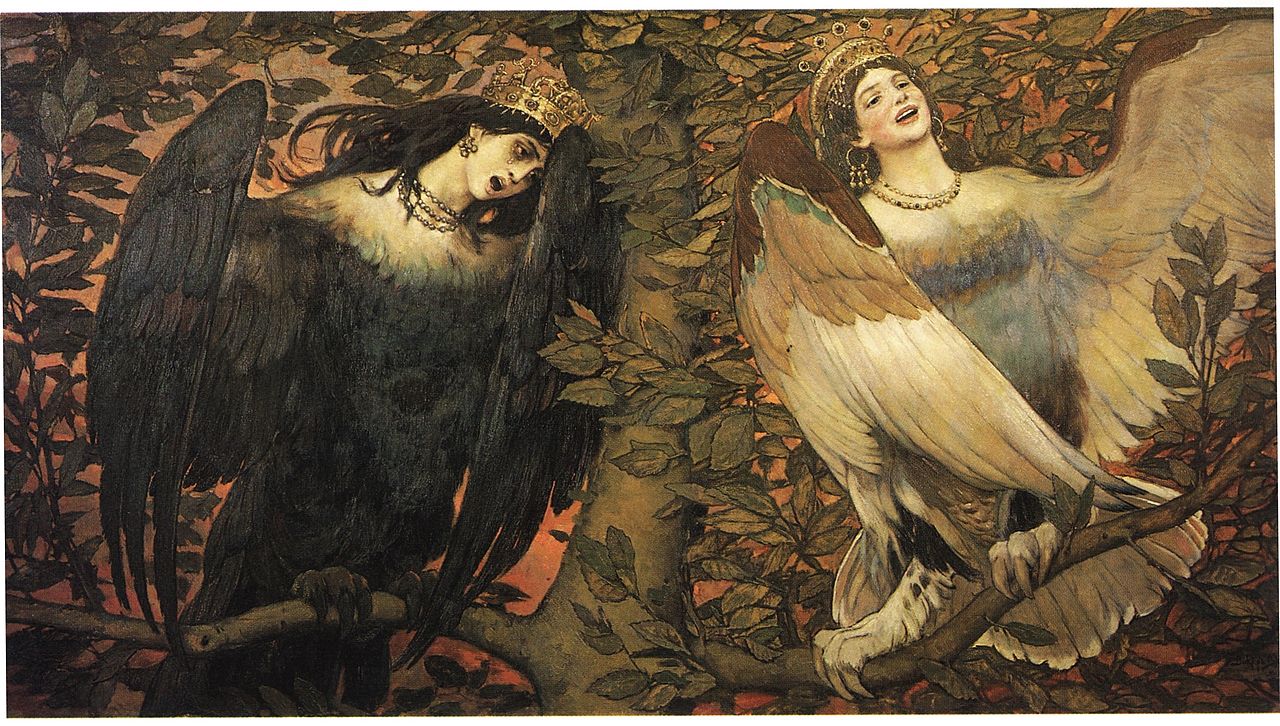 The alkonost, the sirin, the caladrius, the roc and the phoenix are all five mythical birds from legend and folklore. Each were attributed their own magical qualities and roles by various human societies in history and presented here is a brief description of these five fabled creatures.

In Russian legends, the alkonost was a creature with the head of a woman and the body of a bird. It could sing the most enchanting melodies. Those who heard its song let go of everything they had ever known, desiring nothing more as long as they lived.

Before Christian influence, the alkonost was believed to live on the magical island of Buyan. Similar to a bird of paradise in appearance, it was considered to be a wind spirit, able to summon up storms. The alkonost lays her eggs on the gently sloping seashore and moves them into the sea to hatch. Their hatching causes the sea to become rough while a thunderstorm manifests and they are considered to be wind spirits. In Christian times, the home of the alkonost became the Garden of Eden, while she became God’s messenger to the saints, singing them wonderful songs to inspire and encourage them.

The alkonost had a companion bird called the sirin. They were once both considered to be birds of good fortune and regarded as protective spirits. The alkonost guarded good fortune in the day while the sirin protected it through the night.  Russians carved their likeness on doorways and entrances in their home for good luck. Over time this changed and they appeared together as alter egos of each other. The alkonost became seen as being good, while the sirin was given a darker persona similar to sirens in Greek mythology. While the alkonost was believed to promise the saints eternal life in paradise, the sirin was seen as a bringer of death.

In Russian legends, sirins had the top half of a woman, an owl-like body and were often depicted wearing a crown or halo.  They were often associated with the alkonost, but believed to have their origins in Greek myths concerning sirens.

Sirin were believed to live either in Vyraj, or somewhere along the banks of the Euphrates River. Vyraj in Slavic folklore was the place birds migrated to in winter and souls went to after death, before returning to earth as birds. It was also the place where spring on earth had its origins.

They were also believed to sing to the saints, but it was dangerous for ordinary mortals to hear their song. Those who heard it were said to forget their earthly life and follow the sirins wherever they went, often dying in the process. To scare them off, people would resort to making loud noises such as ringing bells and firing cannons.

From the 17th to18th century, a change of thinking occurred. Sirins began to be seen as symbols of peace and harmony in the world. It was believed that only happy people could hear a sirin. Even fewer were said to be able to see them, being as difficult to behold as happiness can be for humans. Hence, from then on, they came to symbolize eternal bliss and joy.

It is thought the image of the sirin was carried on artefacts that merchants from Persia traded in Russia in the eighth and ninth centuries. Its image has also been found around the cities of Kiev and Chersonesos on pottery, jewellery and in illustrations in Gospel books between the tenth and twelfth century. Some of these depict them as birds perching in trees in Paradise.

In Roman mythology, the caladrius was a bird with snow-white plumage that lived in the house of the king.  According to tradition, it had the power to absorb disease from a sick person. It would then fly away, dispelling the illness and curing the sick person — and itself — in the process. Another tradition that predicted the fate of the patient was known in the following way:  If the bird looked into the patient’s face they would live; if it looked away they would die. When it drew out the illness it would fly up to the sun, where the disease would be incinerated. The manner in which it gave its prognosis represented how Christ turned his face away from unrepentant sinners. For those who repent he turned his face towards them, forgiving them. Some scholars think the caladrius was based upon a real bird, possibly a dove, or alternatively a water bird like a heron or a plover. In Christian symbolism the caladrius represents Christ, who is pure white and stainless, being completely unblemished by sin.

In the mythology of the East, Middle East and Arabic countries, the Roc was a legendary gargantuan bird of prey. It featured in many myths and traditions. One account of an alleged sighting by the Moroccan explorer and scholar, Ibn Battuta, compares it to a mountain floating over the China Seas. The Roc also appears in some of the stories in One Thousand and One Nights, such as those of Sinbad the Sailor.

The extraordinary scene of the Roc carrying off an elephant in flight appears in two Sanskrit epics; the Mahabharata and the Ramayana. A similar scene was depicted in a painting by Franz Rösel von Rosenhof of a roc carrying off both a deer and an elephant.

The famous 13th-century Venetian traveller, Marco Polo, reported that the Roc resembled a gigantic eagle. Its feathers were twelve paces in length, and it was so powerful it could seize an elephant in its claws. It could carry this high into the air and release it to fall back to earth, killing it, and then feast upon its flesh.

According to Polo, the Great Khan sent his servants to Madagascar, and they returned with a huge feather. In Sinbad’s second voyage from the The Arabian Nights, the Roc is encountered on a tropical island. Because of Polo’s account the Roc became associated with Madagascar and the island with other gigantic birds.

The phoenix was a mythical bird similar — but not the same as — the Firebird in Slavic folklore, and whose counterpart is found in many other parts of the world. According to some myths it lived in 500 year cycles. As the cycle draws to its conclusion, the phoenix builds a nest. As the bird sits on the nest, it spontaneously combusts and catches fire. A young phoenix rises from the ashes, replacing the older one. Hence the phoenix is seen as a symbol of hope, regeneration, renewal and the continuity of life.

The phoenix was believed to have originated in Arabia, and later became the mythical bird of Egypt. It was later adopted by the Greeks and Romans, spreading through most of the Christian and Western world. Some scholars think that the phoenix and the feng-huang of China may be related. Nevertheless, it is the phoenix that is the most famous, and became renowned as the mythical bird of the Egyptian city of sun, Heliopolis, where it was sacred.

There are various interpretations of how it was represented. Sometimes it was seen as being similar to an eagle, yet sometimes like a heron. Its plumage was red and gold, and the phoenix was believed to have been born in the sun. When it died, it did so in Heliopolis — which was the temple of the sun — and reincarnated from its own ashes. To some scholars the phoenix represents the cycle of the sun where it sets and then rises. Others see it as representing the immortality of the human soul that undergoes renewal through the continuous cycle of death and rebirth. However, different cultures have different interpretations.

An account by the Roman senator, Monilius, passed on by Herodotus in the 5th century BC, says the home of the phoenix was in Arabia, where it died every 540 years on a nest of sweet fragrance. After death, a worm was born from the marrow and bones of the carcass. The worm would then transformed into a new phoenix. According to this account, the Christian church used myrrh and incense during burials because the rising smoke was symbolic of the resurrection of the spirit.

As can be seen of these five mythical creatures, the alkonost and sirin are hybrids of humans and birds whereas the Roc, phoenix and caladrius are extraordinary birds from myth and legend. Nevertheless all played important roles in the ancient cultures that gave rise to them, and even appear in literature and films today.