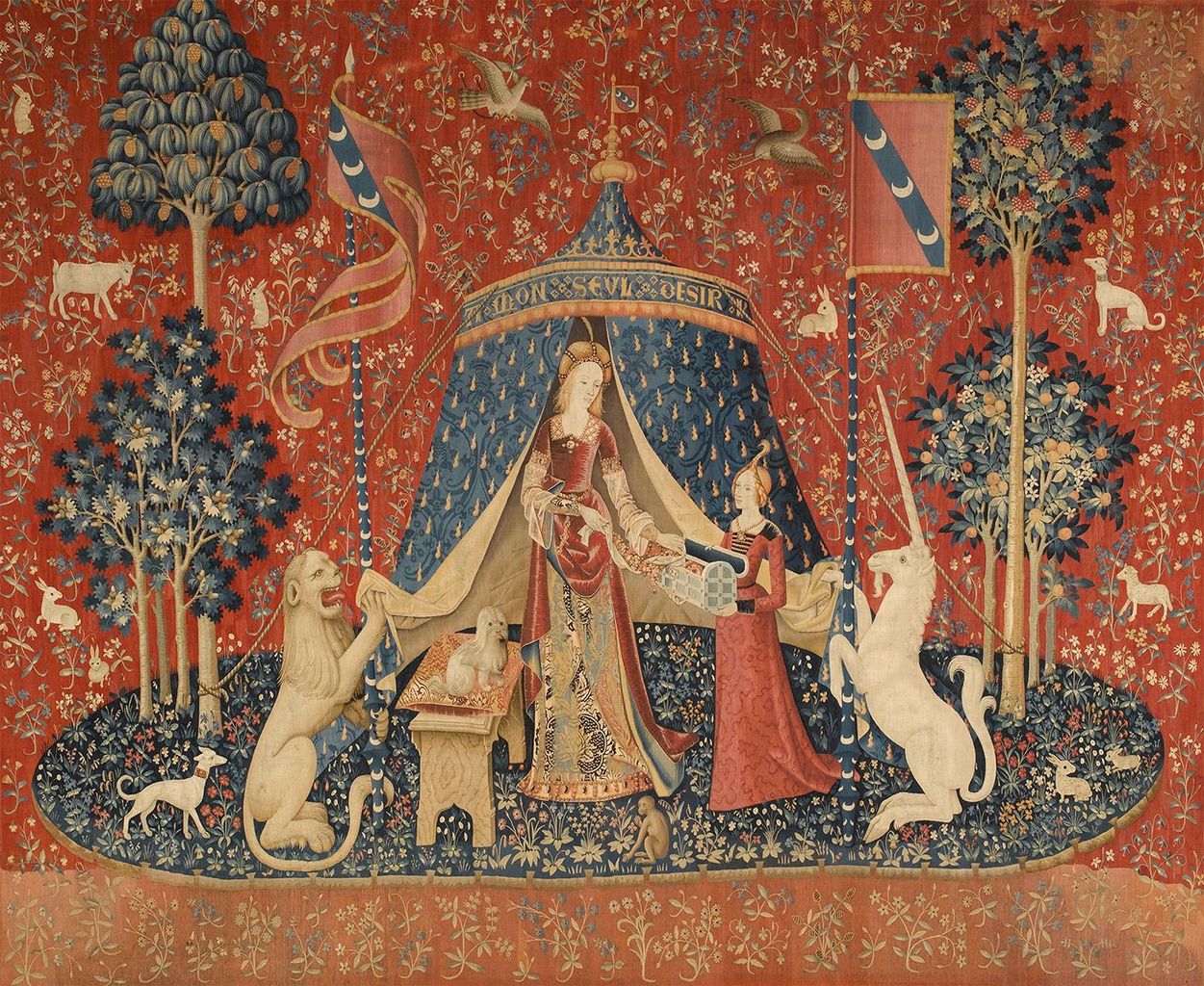 The rare and elusive, mythical, magical unicorn has been part of folklore and legend for centuries, evolving spectacularly into the modern age.  Despite its reputed elusiveness and rarity you do not need to go far to find one these days.  Unicorns appear in a range of products such as toys or works of art sold in high streets and feature in literature, films, television and much more.  In the distant past it was a very different creature but it has grown into the very embodiment of purity, elegance, innocence and beauty that we are familiar with today.

Many of today’s perceptions of the unicorn evolved from the medieval and Renaissance eras where they appeared in works of art, tapestries, and coats-of-arms of the rich and powerful. Presented here is a brief look at a set of six late medieval tapestries known as La Dame à la licorne, or The Lady and the Unicorn.  Today reproductions of these designs appear in various places but notably adorning the walls of the Gryffindor Common Room in the Harry Potter films.

The Lady and the Unicorn

These tapestries were believed to have been created around 1500 but became lost and then rediscovered in the 19th century in the Château de Boussac, Creuse, France.  In 1882, they were moved to Paris to the Musée de Cluny which became the Musée National du Moyen Âge. The tapestries are a total length of 20 metres and required great skill, patience and time to create.  The best available materials were used and they would have been massively expensive to produce.  Only a few of the richest and most powerful members of society could have commissioned such an incredibly expensive work.

Interpreting the Lady and the Unicorn

The tapestries are believed to have an original meaning and purpose that has been lost over time and their interpretation is uncertain today.   Medieval people would have understood what each of the figures, motifs and symbols in each scene meant and how they were all part of an extended allegory that came together to create an overall meaning or message.  Today there are several conflicting explanations. The most accepted theory among art historians is that the six tapestries are allegorical works representing the five human senses of sight, hearing, taste, touch and smell.  The sixth and centre piece represents a sixth sense in this theory.

The scenes appear to depict a medieval realm where myth and folklore interact with both the natural and the human world, mixed with Christian spirituality and morality.  In each scene the Lady and the Unicorn take an important role supported by a lion and a monkey with a number of other different depictions of fauna and flora in the background.  The unicorn and the lion appear holding a standard that frames the lady, except in the tapestry representing sight.

This tapestry depicts the unicorn laying it forelegs in the lap of the lady.  In medieval myth and legend unicorns were the fiercest and the swiftest of creatures.  They could only be captured and tamed by a virgin who would sit in the woods patiently waiting for one to approach and tamely lay its head in her lap in surrender.  This scene shows the unicorn being tamed by the virgin, or that it has already been tamed.  The lady is holding up a golden mirror and the unicorn appears to gaze at its reflection.  In fact the mirror is held so that it shows the aspect of the unicorn that the lady is seeing of the animal.  In this scene we see it has given up its standard bearer role leaving the lion to bear a single standard.

The lady appears with a companion in this tapestry.  The sense of hearing is represented by a musical instrument known as a positive, or pipe organ, which she is playing.  The unicorn and the lion are framing the scene and appear captivated by the sound.  A small unicorn and lion appear on the upright posts of the instrument. The lady plays the instrument while her smaller companion squeezes the bellows behind that pumps the air through the pipes creating the musical sounds.    Musical ability was a highly regarded skill and to be an accomplished musician was considered to be noble, courtly and an attribute of high personal refinement.

In this tapestry the lady is feeding a delicacy to her parrot.  There is a monkey present which also appears to be eating.  During these times it was not unusual to see monkeys in images as they were seen to represent the lower or shameful instincts that humans needed to keep under control.  Other animals present are a lion cub, and an immature unicorn that has yet to grow a horn.  The scenes are set in an enclosed garden which was often a place where courtly love took place. In Christian symbolism it was a place of purity and was believed to symbolize impenetrability and the virginity of the Virgin Mary.  On the lady’s belt there is a pomegranate which is a symbol of fertility and associated with the hunting of the unicorn.

In the tapestry representing touch the lady is alone in the garden with her animals or pets.  The sense of touch is invoked by her holding a banner in one hand, while with the other she holds the upright horn of the unicorn, perhaps suggesting the unicorn may be a substitute for her lover.  One interpretation of this scene might say that she captured the heart of the unicorn and tamed it.  In the background the monkey, cheetah, leopard and other animals are wearing collars, perhaps reinforcing the idea of their capture, and her mastery, and perhaps indicating she has tamed her own lower animal instincts. The lady wears a tiara over her loose hair. In medieval allegory loose flowing hair was indicative of virginity.  She is wearing a dark blue velvet dress that is lined with ermine, another symbol of purity.  Wide ornamental bands adorned with gold and precious gems edge the dress.

This tapestry presenting the allegory of the sense of smell shows the lady making a garland of fragrant carnations.  The allegory is reinforced by a monkey smelling a rose.  The garland of flowers was often used as a motif in the symbolism of love. For example, it was a popular romantic gesture and lonely lovers were frequently shown in garden settings weaving flower garlands.  The carnation was symbolic of both profane and sacred love and fashionable at the time.  Another fashion was the way the lady wore her bracelets at the wrist instead of higher up the arm.  In all of the tapestries the heraldic symbols on display are those of the Le Viste family, but in this tapestry the coat of arms worn by the lion is running the wrong way.

The sixth tapestry is known as the Sixth Sense, or “À mon seul désir” in French and “My Sole Desire” in English, because these words are written in a mysterious message written around the top of the blue pavilion.  It is this enigmatic phrase that is seen as the key to its interpretation.

The scene depicted on the tapestry can be interpreted in several ways.   If it is interpreted as being an extended allegory of the senses like the other tapestries it could represent a sixth sense.  The sixth sense in medieval times referred to the heart, mind and soul as one sense which was not only the source of morality but also that of carnal desire.  Although it could refer to a more romantic way of interpretation it can also be interpreted as moral reasoning or free will.

Another theory is that if the mystery phrase is translated as “my unique desire,” the idea arises that it is only humans who covet material objects such as jewellery.  This makes us unique among life on Earth because no other creature does this.  Yet because of our unique desires we are not fully in the natural world around us or the mythical world we create.

The six scenes depict the lady accompanied by various animals amid numerous plants in a world where myth and nature are literally interwoven to create an overall statement.  We cannot be absolutely sure what the original message was, but that does not stop us from admiring these stunning works and deciding what it means to us today.