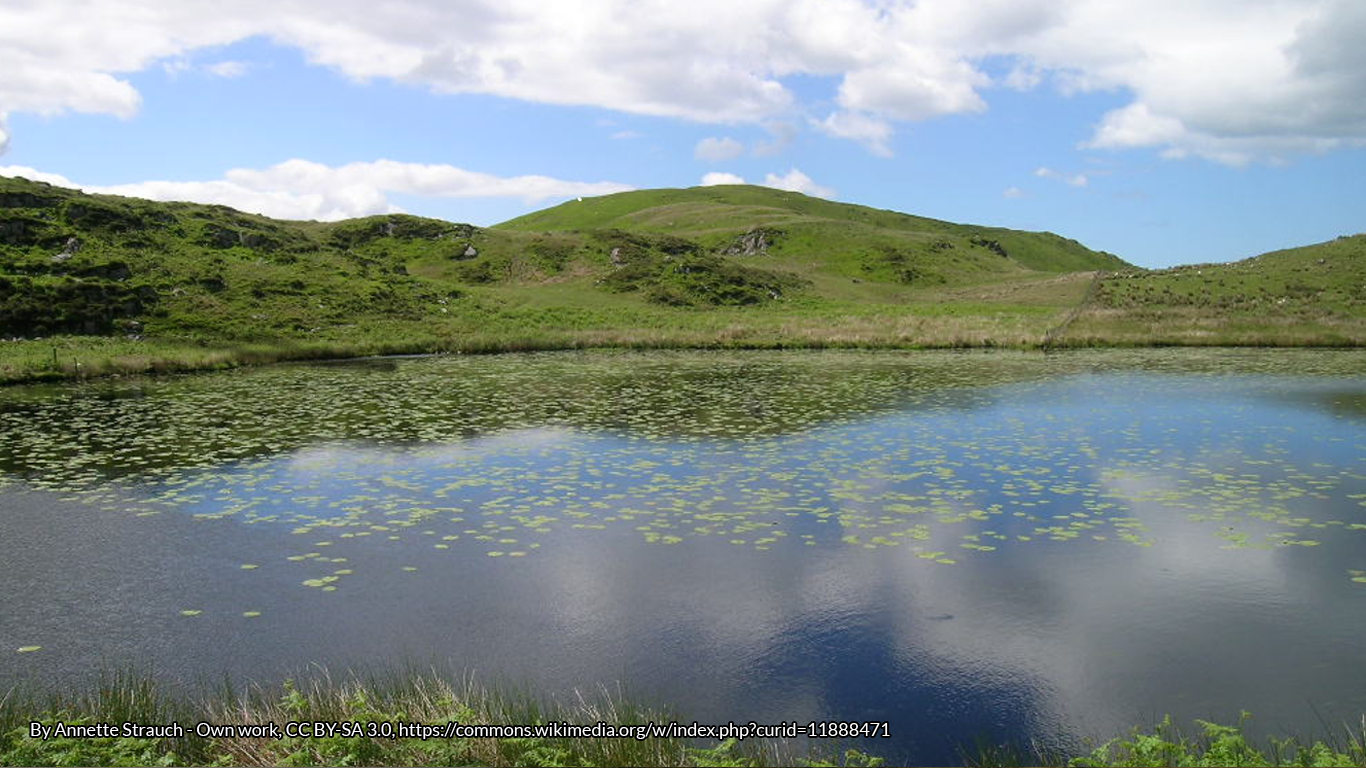 In Wales, legends and folklore of King Arthur and the Otherworld are never far away, and lakes are often the settings for such stories. One such lake is Llyn Barfog, which is also known as the ‘Bearded Lake’ or the ‘Bearded One’s Lake,’ and is situated in a remote and lonely spot in Snowdonia. Some say it got its epitaph from the yellow water lilies that float upon its surface, or the reeds that fringe its banks. Another explanation says that it is named after a legendary being called the Bearded One. Who the Bearded One was remains a mystery, but there are two other legends associated with the lake that more are known about and are presented here. The first tells how a poor farmer came across one of the milk white cows owned by the dwellers from the Otherworld, and the second tells of how King Arthur rid the lake of a monster called the Afanc.

In Welsh mythology and tradition, many of the Welsh lakes are regarded as doorways to and from Annwn, or the Otherworld. Many people believed the lakes to be connected to one another by underground rivers or subterranean ways that made them one vast underworld. There are examples of inhabitants of the Otherworld appearing from some of these lakes, such as the faerie brides of Llyn y Fan Fach and Llyn Coch, to spend time on Earth and then return to their own world. Llyn Barfog appears to be one of many such lakes in Welsh folklore, where the dwellers of Annwn have entry and exit to the earthly world.

This legend tells how Llyn Barfog is associated with mythical beings called the Gwragedd Annwn, also known as the Elphin Dames, who were female dwellers of Annwn. At times, these could be seen in the distance on the hills and mountain tops. They were often accompanied by pure white dogs, known as the Cwn Annwn, and were either driving or tending a herd of milk-white cattle known as the Gwartheg Y Llyn. Both the dogs and the cattle were said to have had reddish-coloured ears and white coats.

The local people all knew about them. They had often seen them from afar for fleeting moments before they would vanish, and few had ever seen them up close. They realised they were the Gwragedd Annwn, who lived under the hills and lakes of Wales, and steered clear of them. The males were the Plant Annwn, and were often associated with Gwynn ap Nudd who was their lord.

Not far from Llyn Barfog, there lived a poor farmer who had a few rather skinny and impoverished cows who were too weak to give milk. There came a really hard winter and the farmer struggled to survive and so he despaired. However, somehow he got through the winter and, one day as he was out walking, he came across a very handsome milk-white cow peacefully grazing alongside Llyn Barfog. It may be that the Gwragedd Annwn had seen his suffering and took pity on him and left the cow for him, but the farmer did not know that. As no one appeared to own it he took it home to his farm.

This proved to be the best move he had ever made in his life, because the milk the cow produced was wonderfully rich and creamy and it produced the finest cheese and butter. As the cow mixed with his own, he soon found himself the owner of the finest herd of milk-white cattle. These faery cattle, for that is what they were, produced the finest milk in such great quantities that he quickly grew very rich indeed and became the richest farmer in Wales.

Time passes, and all things on Earth grow old. The milk-white cow he found at Llyn Barfog began to show her age and produced less and less milk. Seeing this, the farmer thought he would fatten her up for slaughter. This was the worst move he could ever have made. The cow responded by swelling to an unusually large size, to the delight of the farmer who was thinking of the money he would make from her huge carcass.

Eventually, the day came and the slaughter man arrived to carry out his grim task. The farmer took him to the lake where the cow was grazing. Neighbours and friends of the farmer gathered to watch the sorry spectacle. The slaughter man planned to strike the cow a blow upon the head with a sledgehammer. As the cow gazed quietly into his eyes, he prepared himself to launch the fatal strike. Suddenly, he found that his arms had become paralysed and the hammer flew from his hand as if it had been struck a mighty blow. A wild, unearthly cry came from the lake, splitting the air and terrifying those present.

As the men looked towards the lake a green-clad figure rose from the water and cried out:

Angered by the greed of the farmer, one of the Gwragedd Annwn had appeared to claim what was rightfully theirs. The cow immediately heeded the call and walked obediently towards the lake. To the farmer’s consternation and shock of the onlookers, the entire herd of her offspring up to the fourth generation followed her and also disappeared into the waters of Llyn Barfog. Only one milk-white cow remained, and this miraculously changed its colour to black and became the founder of the modern breed of Welsh black cattle.

The farmer, without his herd of milk-white faery cattle to produce the famously rich and creamy milk and dairy products, quickly fell into poverty. Sometimes he would go to the lake and plead to the Gwragedd Annwn, even though he could not see them, to return the cattle to him. They heard him, but because he had offended them the only answer they gave was an eerie, mocking laughter. As his poverty increased, he fell into ruin and bleak depression. Some say in his despair he drowned himself in Llyn Barfog, the Bearded Lake.

The Legend of Carn March Arthur

Another legend connected with Llyn Barfog features King Arthur, who was called upon to vanquish a water monster called an Afanc. There are no reliable descriptions of what an Afanc looks like. Sometimes it is described as a crocodile-like a creature, while others say it is like a giant beaver. Others describe it as a creature similar to a dwarf. Whatever they may look like, they are generally seen as water monsters or spirits that live in lakes, pools, and rivers. They cause them to flood, and will kill humans reckless enough to go near their lair or to swim in their pools. Sometimes they will leave their lairs to seek out and kill people out of malice.

This legend tells how an Afanc caused trouble for the local people. It would kill anyone who ventured close to Llyn Barfog where it had its lair, and every now and then it went on the rampage seeking out and murdering people and animals. Sometimes it would cause the lake to flood as it moved around in the water.

At last the local people tired of it and begged King Arthur to rid them of the troublesome beast. King Arthur rode his mare named Llamrei up to the lake. He had brought with him a strong, magical chain which he managed to drape over the head of the monster while it was lying asleep in the water. The Afanc woke suddenly and, feeling the chain around its neck, realised it was under attack and began to fight and struggle. King Arthur urged his horse forward, trying to pull the beast from the lake. As the monster struggled, his horse placed its foot on a rock and pushed so hard it left its imprint there.

This rock is known as Carn March Arthur and is a petrosomatoglyph, supposedly imprinted with the hoof print of Arthur’s horse Llamrei. Petrosomatoglyphs are rocks that have an image of some part of a human or animal imprinted upon them. They often have religious or cultural symbolism, and are found in many places around the world. They can be artificially made or occur naturally. Sometimes they are linked to saints or, as in this case, to a cultural hero such as King Arthur. As for the Afanc, there are two versions of its fate. The first says that Arthur killed it, but the second says that Arthur and his horse dragged it to a more remote lake called Llyn Cau on the mountain of Cader Idris. There it could do less harm, and remains to this day.

Undoubtedly, Llyn Barfog is a mysterious lake of legend, myth, and folklore. It is where the Gwragedd Annwn lurk with their milk-white cattle which, according to legend, were the progenitors of the famous breed of black Welsh cattle. It was the place where King Arthur and his horse took on the savage Afanc, and where Llamrei left her hoof print embedded in the rock as she hauled the monster from the depths. As the events of today become the history and folklore of tomorrow, who knows what Llyn Barfog, the Bearded Lake, will see and what legends will be inspired along its enigmatic and bearded shores.

(1) The Stray Cow, Page 134 Welsh folk-lore: a collection of the folk-tales and legends of North Wales