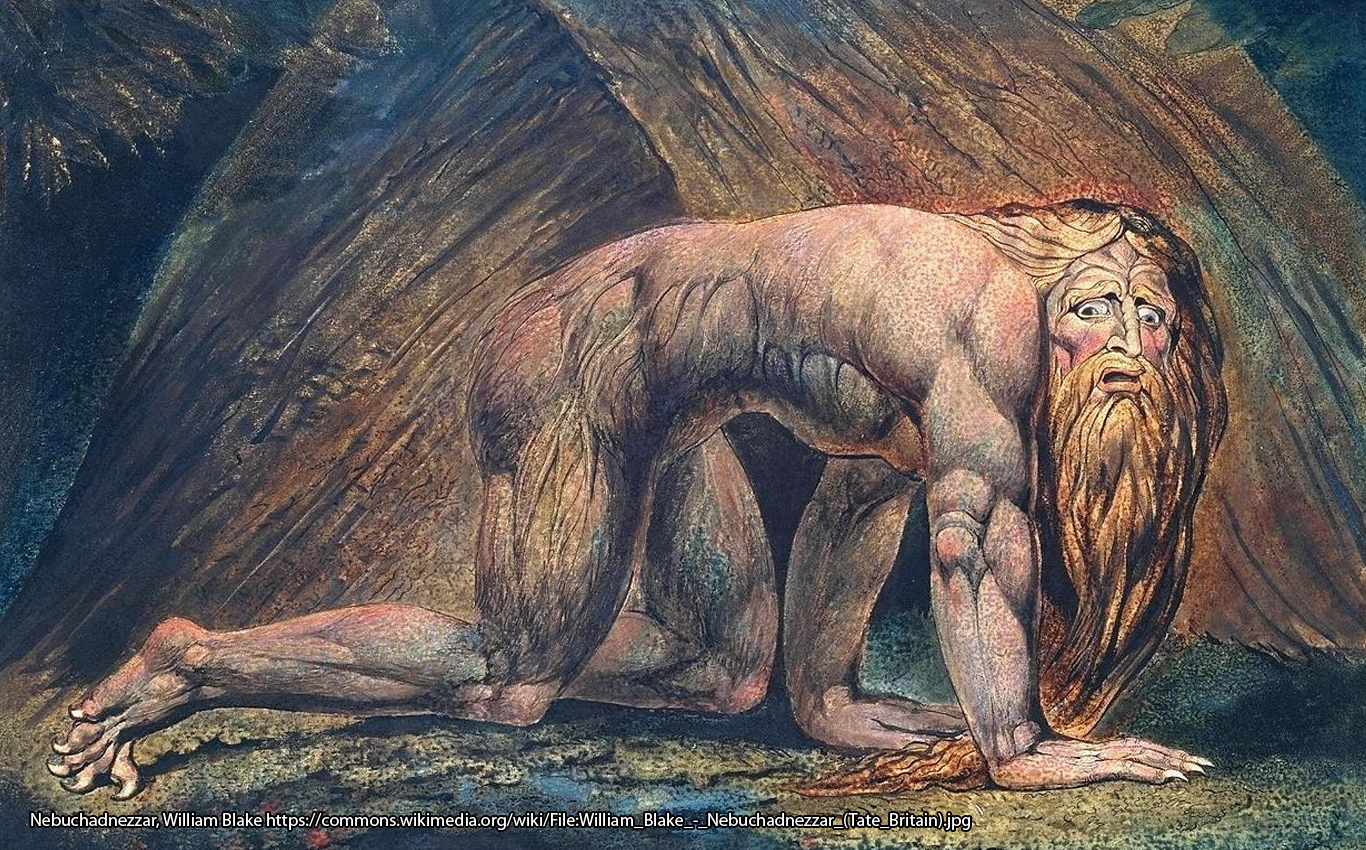 The Vita Merlini, written by Geoffrey of Monmouth in the twelfth century, tells the story of Merlin after the Battle of Camlann, where he ruled over South Wales, had a wife named Guendoloena and a sister named Ganieda.  Unlike many Arthurian stories, instead of glorifying war, it tells of the horrifying effect of war trauma on both the individual and their families — even one as famous and powerful as Merlin. The work was originally written in Latin and presented here as a retelling of the story from a translation by John Jay Parry.

After Camlann, Arthur had been taken to Avalon, and Britain split into many small kingdoms that fought among themselves. Merlin ruled over the southern Welsh, giving laws to the people and foretelling the future.  When Peredur of North Wales quarrelled with Gwenddoleu, the King of Scotland, Merlin and King Rhydderch of Cumbria joined him against the Scots, resulting in a savage battle.  Alongside Merlin were three brave brothers who had fought beside him in many ferocious conflicts.  They stormed through the enemy lines, driving the foe back, but, eventually overwhelmed by sheer numbers, they were slain.  Seeing his brave brothers-in-arms fall Merlin cried,

“Where can I now find such brother-in-arms who have stood with me and fought the vicious foe?”

Seeing blood and death all around, he wept and lamented for all the dead and dying, but the fighting continued, unabated.

The Britons rallied their troops and drove hard against the Scots, forcing them to flee for their lives.  Seeing victory, Merlin called Peredur and Rhydderch to him, telling them to bury the dead with honour. Grief then took him, and he began to wail and cry, mourning the death of his comrades and so many brave warriors.

Madness in the Woods

Peredur and Rhydderch could not console him so great was his distress, so they followed his instructions, leaving him alone in his anguish.  As Merlin’s cries rent the air his mind was taken by a fury, and he fled into the woods where he found joy and peace in the quiet of the trees and hidden glades. Naked, he hunted animals and harvested nuts, fruit, and roots, surviving only from the gifts of the woods. He watched the animals and birds and learned of their ways, studying the trees and the plants and the natural world about him.

Winter came and food and shelter became hard to find, and Merlin struggled to survive.  He often talked out loud to himself about the problems he faced.  One day, while he was hidden among the trees and thickets, a traveller heard him and stopped to listen to what was being said.  To the surprise of the traveller, when he approached, the wild man fled through the undergrowth faster than any animal.

After Merlin had fled to the woods, Queen Ganeida, Merlin’s sister and the wife of King Rhydderch, was greatly worried for his well-being.  She sent searchers to the woods to look for her brother in the hope of bringing him back. The traveller had resumed his journey, and meeting one of the searchers, he told of his strange encounter with a wild man and gave directions to the scene of the incident. The searcher thanked him and continued to the scene, but Merlin had gone.  He searched all the wooded valleys and hidden glades and scoured the mountains, searching places where few had ever trod.

At last, the searcher came across a fountain hidden by hazel thickets, and, by the gushing water, naked, unkempt and talking to himself, sat the wild man of the woods. Not wanting to alarm him, the searcher hid behind a bush.  He was a good singer and played the lyre. Gently and softly he played the strings and sang softly of the mourning of Guendoloena for Merlin, her beloved husband, and of  the worry of Ganieda for her brother.

The music and singing soothed Merlin’s soul and he stood to see where it came from. Seeing this the singer slowly stood up, still playing his lyre, and repeated the song. The music stirred pleasant memories of his wife and sister, and he was deeply moved by their love. He remembered who he was, and what he had been, and set aside his madness. He asked the searcher to take him to the court of his old friend King Rhydderch where they both lived.

At the Court of King Rhydderch

As Merlin walked through the city gates, Ganieda and Guenedolena ran to meet him. They covered him in kisses and hugged him, making him feel greatly loved, and he showed his own love to them.  Happily, they led him to the royal court where King Rhydderch received him with great honour.  Merlin, seeing the vast crowd of people present and unaccustomed to human company, panicked and his madness returned. Desperately, he tried to escape to the sanctuary of the woods, far away from the roaring of voices.

Rhydderch refused to let his old friend go.  He ordered him to be restrained and music played upon the lyre to ease his distress. Begging him to stay, the King offered expensive presents, but Merlin told him he preferred the treasures of the woods.  Rhydderch worried about his safety in the wild and ordered him to be chained, whereupon Merlin fell silent and morose, refusing to speak or smile at anyone.

One day, Ganieda came looking for her husband, the King,  who moved to embrace and kiss her affectionately.  Noticing a leaf caught in her hair he gently untangled it while lovingly chatting with her.  Seeing this,  Merlin smiled knowingly and laughed.  This surprised the King and he urged him to tell all what he found so amusing.  Merlin fell silent, refusing to answer, but Rhydderch persisted with his question, promising him gifts.  Merlin then told him the freedom to return to the woods was the only gift he wanted, and, if he granted that, he would tell him why he laughed. Knowing he had nothing to give that Merlin would value, Rhydderch finally agreed.

Therefore, Merlin said, “I laughed when I saw the affection you showed the Queen when you removed the leaf from her hair, when earlier, she lay under a bush with her lover, which is how the leaf got there.”

Shocked,  Rhydderch looked angrily at his wife.  Ganieda tried to conceal her shame by smiling and saying, “Take no notice of a raving madman who cannot tell lies from truth.  I will prove his madness!”

She called a young boy over saying, “Now dear brother, show us your powers of prophecy.  Tell us how this boy will die!”

Merlin said, “My dear sister, he shall die in manhood by falling from a cliff.”

Ganieda then told the boy to go and get his long hair cut short and put on different clothing.  When he returned thus disguised she made him stand before Merlin and said, “And now dear brother, tell the King what death you foresee for this boy!”

Merlin replied, “This boy will grow up to meet death in a tree while his mind has shut out all reason.”

Ganieda turned to her husband and said, “This proves my innocence and my brother’s madness for the same boy cannot surely have two deaths. I will prove the point further! “

Taking the boy aside she told him to go and put on girl’s clothing and come back to her dressed in that way.  When he returned she presented him to Merlin saying, “Now, dear brother, tell us how this girl shall die!”

Merlin replied, “Girl, or not, death will be in a river!”

Rhydderch laughed at the three different deaths predicted for the same boy and was sorry he had doubted his wife.  Ganieda was greatly relieved, but deep inside she wept for her brother.  Rhydderch kissed and embraced his wife but inside he grieved for his old friend and brother-in-arms, remembering his greatness.

Return to the Woods

Merlin went down to the city gates but Ganieda appeared, and, spreading her arms before him, entreated him to stay.  He thrust her aside and strode on. Her servants tried to stop him but he simply glared down on them as if they were naught but impertinent little imps, leaving them shuddering.

Guendoloena came running through the streets, and pushing all aside, threw herself before Merlin.  She wailed and wept, begging on her knees for him to stay, that they might live again as man and wife.  Merlin could not look upon her, but Ganeida said,

“Have pity on your wife who loves you and will die for you.  Would you have her live out the rest of her life in sorrowful longing for her husband?  Say the word and she will follow you to the forest and live as you live.  Say the word brother!”

Merlin bowed his head for a moment as if softening, but then the madness in him spoke, “I will be free of her, free of you, free of love and its binding chains, therefore it is right that she be allowed her chance of happiness and marry a man of her own choosing, but beware should that man ever come near!  On her wedding day, I will come to her and give her my gifts.”

His sister and wife watched his departure sorrowfully, but marvelled how he could have known about the secret affair of the queen. Both were, too, convinced of his derangement, considering his three different predictions for the death of the boy…

Find out if Merlin’s prophecy came true in the second part of this tale, ‘British Legends: The Madness of Merlin‘ — on #FolkloreThursday next week!