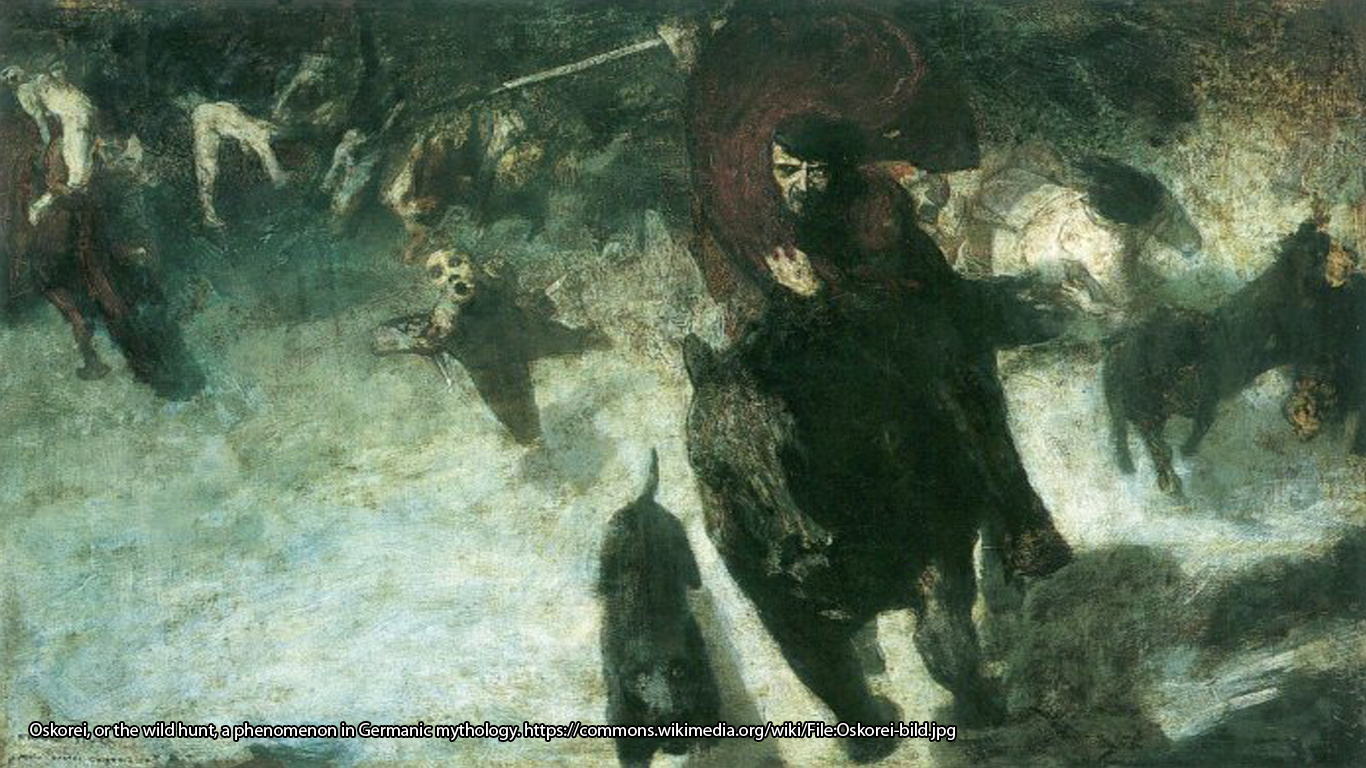 Wild Edric was an Anglo-Saxon earl from Shropshire who was also known as Eadric Salvage, Eadric Silvaticus and Eadric the Wild. He was one of the wealthiest men in Shropshire and the lord of fifty-six manors. Tradition says he was a great huntsman, hunting areas of the Forest of Clun, Stiperstones and the Long Mynd. Although he was a real person many myths and legends became attached to him.

Wild Edric was not believed to have fought at the Battle of Hastings, but most of his manors were taken by King William to be given to his own barons.  Therefore, between 1068-70 he allied himself with Bleddyn ap Cynfyn, Prince of Gwynedd, and his brother, Riwallon, the Prince of Powys, who were Welsh resistance leaders opposed to William.  They attacked the Normans in Herefordshire, devastating Hereford, but, unable to capture the castle, they retreated.  In retaliation, the Normans attacked Edric many times, but could not defeat him.

In 1069, William led his northern army to put down a rebellion led by the Earl Mokar of Northumberland and his brother Edwin. While William was preoccupied, Edric and his Welsh allies joined with rebels from Cheshire, attacking Norman lands in northern parts of Shropshire. They burnt Shrewsbury, but were unable to take the castle.

When news of the assault reached William he turned his army around and headed south. Instead of confronting William, Edric retreated back to Shropshire. The Welsh and Cheshire rebels fought William but were defeated near Stafford.  William was not satisfied with this victory and proceeded to attack and lay waste the land. Eventually, Edric was forced to make peace and swear allegiance to King William who took all but three of his remaining manors. In 1072, Edric supported and accompanied William in and attack on Scotland.

According to some legends, Edric’s surrender and support for the Normans greatly displeased his own people. They imprisoned him along with his wife, Lady Godda, and his fighters in lead mines in a rocky hill in Shropshire called Stiperstones and placed a curse upon them.

Under this malediction — at times of threat to England — Wild Edric, Lady Godda and the host must ride out and fight the enemy.  Then they must return to their underground prison to await further threats. They cannot die until England is returned to how it was before the Norman conquest and all wrongs have been made right.

There are several legends that tell of alleged sightings of Wild Edric and his host riding out in times of danger to the country. Such occasions include during the Crimean War in 1814, before the First World War in 1914 and before the Second World War in 1939.

During the Crimean War, a girl from Rorrington claimed she and her father had seen Wild Edric and his host. On hearing a note from the horn of a huntsman her father told her to close her eyes and stand still until the host had passed by. However, the girl opened her eyes and alleged she saw Wild Edric and Lady Godda riding at the head of a great host of warriors. According to her, Edric wore a green feather in his dark hair and a cloak of green. At his side he carried a sword and a horn.  Lady Godda had long blond hair that reached down to her waist, and wore a white head band around her forehead with a dagger at her side.

Possibly from these alleged sightings and his reputation as a huntsman, Edric became associated with the wild hunt, a legend found in many parts of Europe. The wild hunt was a group of phantom horsemen and dogs that either rode wildly cross the sky, or just above the ground. They were believed to be hunting lost souls and the souls of the newly dead who they would capture and take away. There was also a belief that as they passed they could also draw out the souls of those asleep and carry them away to become one of them.

The Monster Fish of Bomere Pool

Another Shropshire legend connected with Wild Edric is the monster fish of Bomere Pool that carries the sword of Wild Edric strapped to its side. No angler has managed to catch it, though it was once netted, only to draw the sword and cut itself free. The determined angler made a net of iron links and managed to net it again bringing it to land. Again, it drew the sword, cut itself free and jumped back into the pool. This shocked and frightened the people so much no one else attempted to catch it. It was sometimes seen basking in the shallows still wearing the sword.

Wild Edric was said to have been born nearby in the Saxon manor of Condover which should have been part of his inheritance, but his family were cheated out of it. According to this legend the sword was given to the monster fish for safekeeping until the true heir arrives to claim the inheritance, when it will present him with the sword.

Another legend gives Edric an alternative fate to that of the wild hunt, telling how he married a lady from the Otherworld.  One day he was hunting in the forest of Clun. As night fell he saw the lights of a mansion in the distance and decided to seek shelter there. He knocked on the door but no one answered. As it was open, he entered and was surprised to see six beautiful ladies all dancing around in a circle; in the center of the circle was a seventh lady. Although they were all exceedingly beautiful, the woman in the centre was taller and more beautiful than the others, and dressed in more elegant clothing. The others danced gracefully around her, softly singing a strange and haunting song.

Edric fell in love with the lady in the centre of the circle as soon as he saw her. He realised they were all from the Otherworld, but — ignoring the fear of being caught in a spell — rushed in, and quickly carried her out of the circle. Immediately, the rest of the ladies turned into screaming, ferocious fiends who fought to protect their sister. They attacked him, biting and scratching viciously at his flesh, but Edric managed to carry the lady across the threshold.

The fiends would not follow beyond, and he escaped. Placing her before him on his horse he rode wildly through the forest and back home. During her abduction, the lady had not struggled or uttered a single word, but was indignant at his treatment of her. For three entire days she ignored his soft words and promises of love, and sat demurely refusing to talk. It was not until the fourth day was nearly done when she suddenly spoke, saying,

“My name is Godda. I believe you are a good man. I will be your bride but conditions must be fulfilled. I will bring you good luck and you will enjoy good health, peace and abundance as long as I live with you. Be warned! Should you ever reproach me because of my sisters, or the place I am from, or for what I am, you shall lose your bride from the Otherworld. From that day on you will lose your wealth, your health and waste away to your death, pining for what you have lost.”

Edric readily agreed and promised his love would be forever true. They were married and he gave a splendid wedding feast.

King William heard of the wonder of Edric’s bride from the Otherworld. Greatly wanting to see her, he summoned them to attend him. Edric and his wife duly presented themselves to William, who could see from the beauty of the woman that she was indeed not of this world. With King William’s curiosity satisfied, Edric and his wife left for home and lived happily together for many years.

One evening, after a long hunting trip, Edric returned home but could not find his wife anywhere. He sought high and low for her, becoming angrier and angrier until finally she appeared. In his anger he said,

“No doubt you have been busy dancing with your sisters when you should have been here at home awaiting my return!”

As soon as he said this her face turned to sorrow and she vanished before his eyes. In a flash, Edric remembered their wedding contract and was overcome with grief for his thoughtlessness. In desperation, he begged, he cried, he pleaded day and night for her to come back, but all to no avail.  Just as she had warned, his body wasted away and he died in grief for the happiness he had known but could never have again.

The Monster Fish of Bomere Pool, Shropshire – Under the influence!