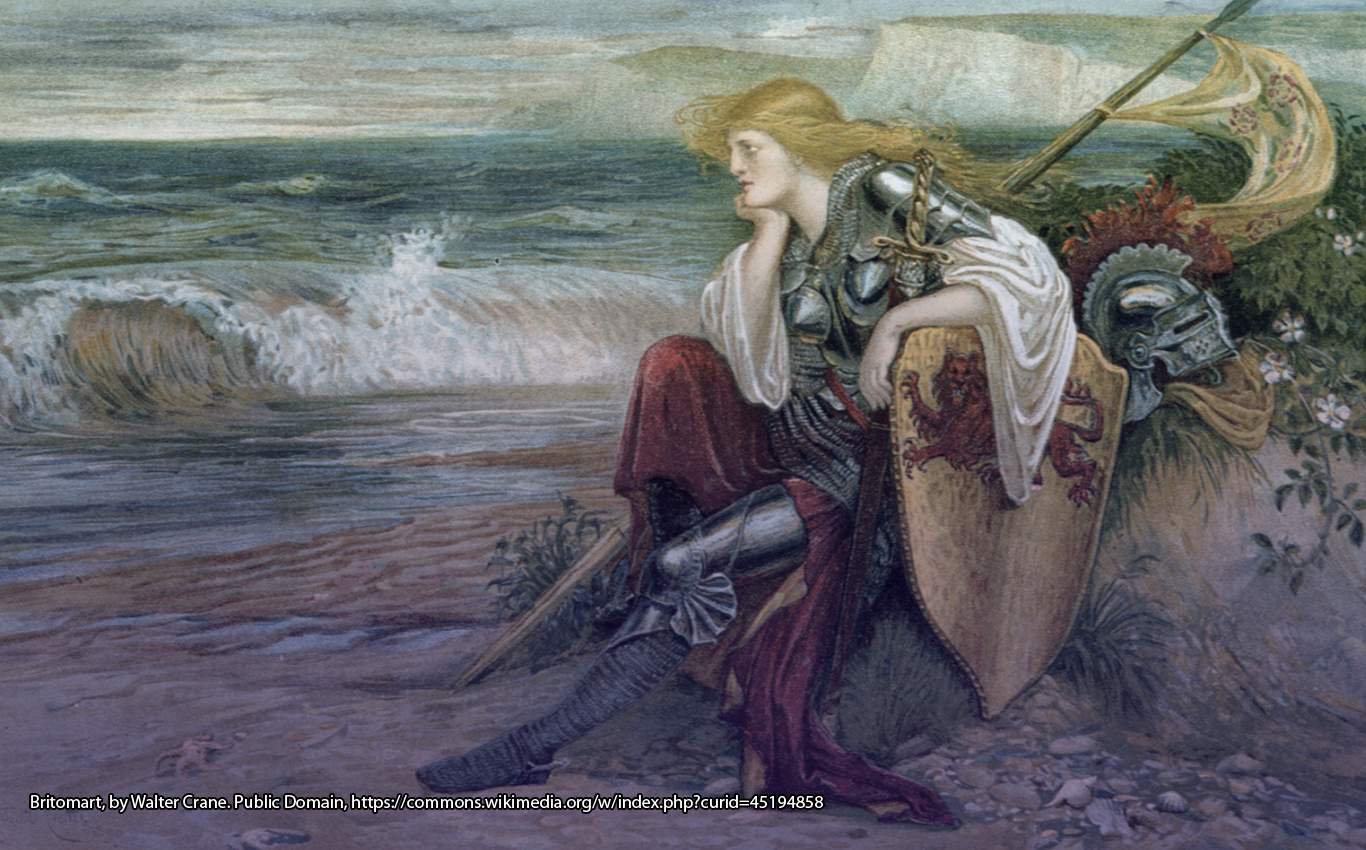 The epic unfinished poem, The Faerie Queene by Edmund Spenser, published 1590-96, created a parallel of the medieval universe that alluded to events and people in Elizabethan society. The narrative draws on Arthurian influences, legend, myth, history, and politics, alluding to reforms and controversial issues that arose in the times of Elizabeth I and Mary I. It is an allegorical work that both praised and criticised Queen Elizabeth I, who is represented in the poem by Gloriana, the Faerie Queene. The six human virtues of holiness, chastity, friendship, temperance, justice, and courtesy are all represented by a knight. Spenser raises many questions about Elizabethan society, especially about the role of women in maintaining the patriarchal order. This is represented by a spectacular battle between Britomart, the Knight of Chastity, and Radigund, the Amazon Queen.

Britomart the Knight of Chastity

Britomart is a virginal female knight, who not only represents chastity but is also associated with English virtue, especially military power. The “Brit” part of her name comes from “Briton” while “martis” comes from the Roman god of war, “Mars,” meaning war-like person. From an early age she refrained from the traditional activities of girls at the time, and was trained in the use of weapons and combat, preferring such typically masculine activities. She dressed in the armour of a knight, acted like a knight, fought like a knight, and wielded a magical black spear.

After a long quest and many adventures seeking him, Britomart married Artegall, the Knight of Justice whom she had seen in the magic looking glass belonging to Merlin. Yet, as was often the way with knights, Artegall was bound to a quest he could not abandon without losing his honour. Gloriana, the Faerie Queene, had given him the task of rescuing the Lady Eirena from the tyrant Grantorto. It was his chivalric duty to complete the quest or die trying. Despite her sorrow at his leaving, Britomart knew she had to allow her husband to complete his quest, and looked forward to his return.

On his quest, Artegall, accompanied by Talos, an iron-man who helped him in the dispensation of justice, came to the country of the Amazons, ruled by the warrior Queen Radigund. She fought against any knight who arrived in her realm and would not submit to her will. After conquering them, she forced them to obey her every command or die. Radigund made all defeated knights remove their armour and against their will wear female clothing, forcing them to work by spinning thread, sewing, washing clothes, and other tasks that women usually did. If any refused or complained, she executed them.

Upon hearing Artegall had arrived, Radigund challenged him to fight on the condition that the loser, if they lived, would obey the will of the winner. Artegall accepted and a ferocious fight began. Radigund attacked him, furiously driving him back, but Artegall struck her shield, splitting it in two. This enraged Radigund and she fought back viciously, badly wounding his thigh. Thinking she had the knight at her mercy, the queen began to taunt and mock him. Now it was Artegall’s turn to be enraged and he struck a powerful blow to her head, knocking her senseless to the ground. As he stooped to take off her helmet to decapitate her, he was stunned by her beautiful face and could not harm her. Instead he threw away his sword, cursing himself that he had hurt such a lovely woman.

Recovering her wits, Radigund sprang to the attack, driving him back. Having thrown his sword away, Artegall could not return the blows, and would not have done so anyway. Instead, he deflected the queen’s blows with his shield, while asking her to stop fighting. Radigund refused, and continued striking at him until he yielded completely, not wishing to harm her again. Despite his initial victory, by throwing his sword away and yielding he was now bound by the terms he had agreed to, and was taken into the servitude of the Amazon Queen. She took Artegall’s armour and dressed him in female clothing, keeping him prisoner and making him work at female tasks, considered greatly demeaning and humiliating for a knight in those times. Talos escaped and took the news of his captivity back to Britomart.

Learning of her husband’s plight, Britomart set out to rescue him accompanied by Talos. They barely rested until reaching the land of the Amazons, and then set up their pavilion outside the city. Seeing this, Radigund armed herself and, ordering trumpets to sound, marched out of the city gates to challenge her. Britomart stepped boldly out of the pavilion, ready for whatever the day would bring. When the two finally met face to face, Radigund recited the strict conditions that she wanted the fight to be governed by. These were the same that Artegall and all the other knights had agreed to, and now bound them to her in their defeat. Britomart refused the conditions, declaring she would only be bound by the rules of chivalry.

This angered Radigund, who gave the signal for the trumpet to sound the beginning of the fight. They both attacked each other savagely, asking for no quarter and giving none. Fighting furiously, they hacked and stabbed at one another until the ground under their feet was red with blood, but still they fought on. Eventually, Radigund, sensing Britomart was weakening, thrust forward with all her strength, taunting her by saying, “This is for the man you love so much. I will tell him you died just for him!” and struck powerfully at her shoulder, cutting her to the bone. Despite being sorely wounded, the blow roused Britomart to great anger. Throwing herself forward, she brought her sword down upon her foe’s helmet, splitting it apart. Radigund fell senseless to the ground and Britomart finished her off with one blow.

When the Amazons saw the death of their queen they fled. Britomart desperately wanted to find her beloved Artegall, and made her way through the city until she found the place where the knights were imprisoned. On entering she was shocked to the core at what she found. Inside, the knights had all been made to wear female clothing and forced to do female tasks. At last she found Artegall, who also suffered the same fate as the others and, seeing her, turned his face away in shame. Quickly finding other garments, she made him and the others put these on.

They stayed in the city until Britomart had recovered from her wounds. In this time she took control, changing the government and the ways of the Amazons, and dispensing justice which had been usurped by Radigund. The people soon grew to love her, listened to her wisdom, and followed her teachings. She set free all of the captured knights and made them magistrates of the city, making them swear loyalty to Artegall, the Knight of Justice.

Artegall, remembering his quest to save the Lady Eirena from the villainous clutches of the tyrant Grantorto, told Britomart that it was his knightly duty to resume his adventure. Britomart knew he was obliged to complete the quest for the sake of his honour and reputation, and sorrowfully she resigned herself to him leaving again.

The Role of Elizabeth I

With Elizabeth I ruling England, Spenser needed to be careful how he presented Radigund. He made a great effort to show the Amazon Queen as a wicked oppressor who does not rule men by respect, but weakens and subjugates them. In contrast, Britomart emancipates men, bolstering their masculinity and self-assurance of their role in society. The captive knights were uncomfortable and distressed in being forced to wear female apparel, perceiving themselves to have lost masculinity, strength, and identity.

The cross-dressing of Britomart, wearing the armour of a male knight, is in contrast to the enforced cross-dressing of the captive knights by Radigund. Britomart appeared happy and comfortable in this form of dress and her personality shone out: she became one of the bravest, most formidable, and arguably one of the most swashbuckling knights in The Faerie Queene. However, having rescued the captive knights from the renegade Radigund, she looks very much like the handmaiden of Elizabethan patriarchy. But there is a twist. In doing so, she accomplished what the male knights could not and it was she who restored the patriarchal order after the strong arms of the male knights had failed. In contrast, Radigund represents renegade female power at war with Elizabethan patriarchy, which was something that could not be tolerated.