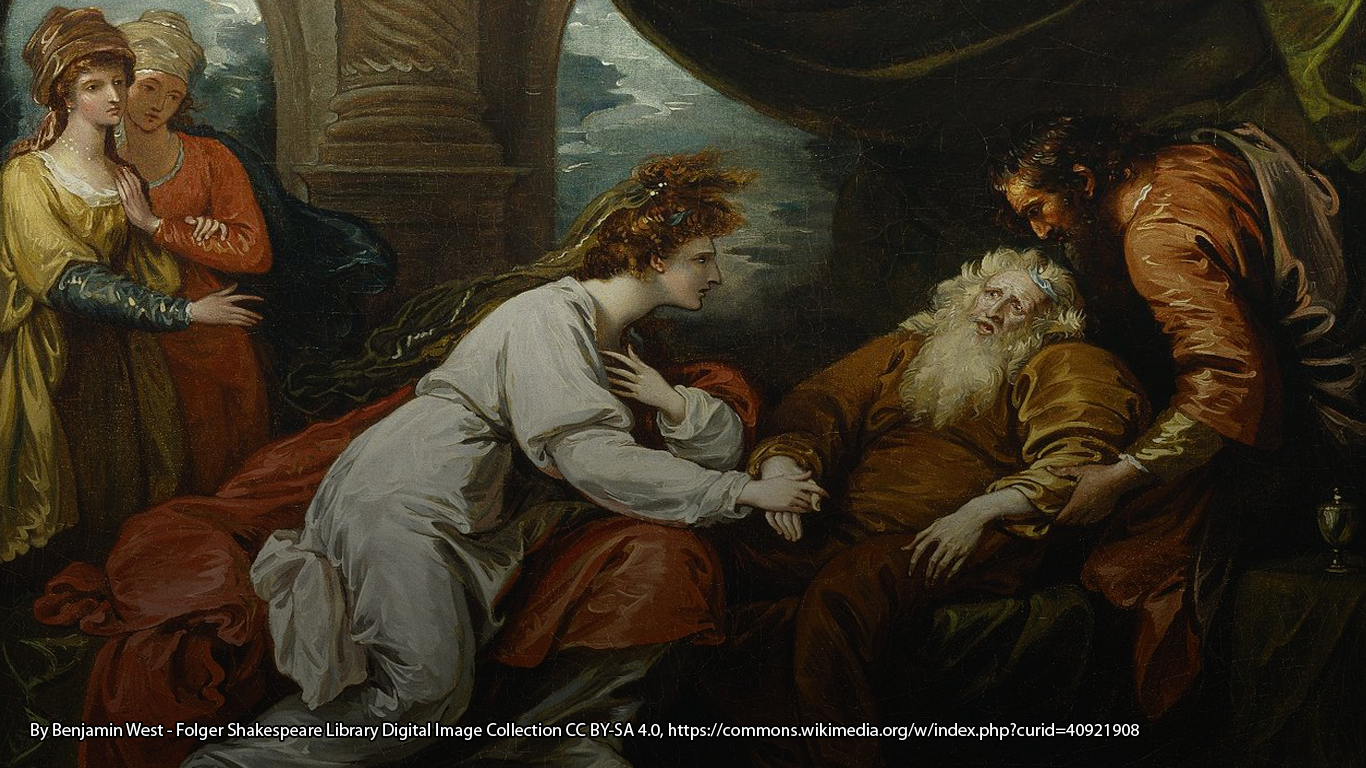 King Leir and his youngest daughter, Queen Cordelia, were legendary rulers of the the Britons.  Their story appeared in History of the Kings of Britain (Historia regum Britanniae) by Geoffrey of Monmouth in the 12th century and presented here is a retelling of that story.

Leir took the throne after the untimely death of his father, King Bladud, and founded the city of Kaerleir upon the river Soar, which later became Leicester. Both were named after him.

As he grew older, Leir began to consider what should be done with his kingdom when he died as he had no son. He did have three daughters, and decided he would marry them to suitable husbands and divide the kingdom between them.  First, Leir decided to test each daughter’s love for him to decide who would receive the best parts of his inheritance.  To do this he decided to ask each one how much they loved him.

A Test of Love

First he asked his eldest daughter, Goneril.  Seeking solely to impress and flatter she told him she loved him more than her own soul. Pleased with her answer he told her,

“Since you have preferred my declining age before your own life, I will marry you, my dearest daughter, to whomsoever you shall make choice of, and give with you the third part of my kingdom.” (1)

Next, he called Regan, his second eldest daughter, to him and asked her the same question.  Having seen how well her elder sister had been rewarded for her flattery she told him she loved him above all creatures.  Again, Leir was impressed and pleased by the answer and told her that she would have a husband of her choice and receive one third of his kingdom.

Last he called to him his youngest and favourite daughter, Cordelia and asked her the same question. Cordelia had seen how easily the flattery of her sisters had impressed him but deciding that she would make a trial of his love for her told him,

“My, father, is there any daughter that can love her father more than duty requires? In my opinion, whoever pretends to it, must disguise her real sentiments under the veil of flattery. I have always loved you as a father, nor do I yet depart from my purposed duty; and if you insist to have something more extorted from me hear now the greatness of my affection, which I always bear you, and take this for a short answer to all your questions; look how much you have, so, much is your value, and so much do I love you.” (2)

This disappointed her father, who was seeking flattery, and did not appear to understand what she said.  He told her angrily,

“Since you have so far despised my old age as not to think me worthy the love that your sister’s express for me, you shall have from me the like regard, and shall be excluded from any share with your sisters in my kingdom. Notwithstanding, I do not say but that since you are my daughter, I will marry you to some foreigner, if fortune offers you any such husband; but will never, I do assure you, make it my business to procure so honourable a match for you as for your sisters; because, though I have hitherto loved you more than them, you have in requital thought me less worthy of your affection than they.” (3)

His test complete he married Goneril to Maglaunus, the Duke of Albania, and Regan to Henuinus, the Duke of Cornwall. When he died they would get the rest of his kingdom between them and Cordelia would get nothing.

Across the sea in Gaul, Aganippus, the king of the Franks, was seeking a wife. Hearing of the beauty of Leir’s youngest daughter he sent emissaries to her father asking for her hand in marriage. Still angry with Cordelia he told them that he was willing to give his daughter, but without money or land. The emissaries returned to Aganippus with Leir’s answer, who told them to return to King Leir with the following message,

“That he had money and territories enough, as he possessed the third part of Gaul, and desired no more than his daughter only, that he might have heirs by her.” (4)

With age Leir grew weaker, and — seeing their chance — his son-in-laws, encouraged by his daughters, usurped the crown.  An agreement was made that Maglaunus the husband of Goneril, was to give and maintain a house for him and provide a retinue of sixty knights.  Goneril grew to begrudge her father his retinue and reduced their number to thirty.

Leir resented this and went to Regan, who had married Henuinus.  They gave him a warm welcome and honourable reception but soon fell to quarrelling with him.  Out of spite, Regan had her father’s retinue reduced to five.

Finding this an affront to his dignity and honour he returned to Goneril, seeking support, but she told him that if he wanted to stay with her he must dismiss all of his remaining retinue except for one.  Leir was forced to comply, but now remembered Cordelia, whom he had scorned and sent over the sea penniless to marry King  Aganippus.  Reflecting on his own poverty he remembered his treatment of her and wondered how she would receive him.  Nevertheless, believing he had no other choice, he travelled across the sea in the hope she would treat him more favourably than her sisters.

On board ship he was dismayed to find two princes were both given more respect and honour than he and bitterly complained,

“O irreversible decrees of the Fates, that never swerve from your stated course! Wwhy did you ever advance me to an unstable felicity, since the punishment of lost happiness is greater than the sense of present misery?

The remembrance of the time when vast numbers of men obsequiously attended me in the taking of cities and wasting the enemy’s countries, more deeply pierces my heart than the view of my present calamity, which has exposed me to the derision of those who were formerly prostrate at my feet. Oh! The enmity of fortune! (5)

At last he understood the words Cordelia had told him of her love for him.  He bitterly regretted his treatment of his youngest daughter who had answered truthfully and not given false flattery.

With such thoughts of bitter reflection he arrived in Karitia where Cordelia was residing. Wasting no time he sent a messenger to her bearing tidings of his presence in the city and informing her of his poverty and the desperation and indignity of his present situation.

Cordelia, now a queen after her marriage to King Aganippus, was surprised by his arrival and deeply upset and shocked at the news of his impoverishment. She ensured he was well fed and lodged and provided him with forty men all suitably trained an attired to serve a royal master.  She instructed that as soon as he was bathed rested and suitably attired befitting his kingly status she was to be informed.

Her instructions were carried out and in due course she and her father were reunited and reconciled. He told her how he had been mistreated by his two eldest daughters and their husbands and had come to seek her and her husband’s assistance in recovering his realm. Giving him a fitting reception for a king she and her husband promised all their power would be mobilised to return his kingdom to him.

Aganippus ordered his army be made ready for the invasion of Britain with King Leir at their head supported by King Aganippus and Queen Cordelia. Battle commenced and Leir was the victor, retaking his kingdom from his sons-in-law.

The Death of Leir and Cordelia

Leir was now a very old man and after ruling over the Britons for the second time soon passed away. Sadly, King Aganippus also passed away and Queen Cordelia became the ruler of the Britons. She buried her father in the city of Leicester in a chamber under the River Soar, which some say was originally a temple to the worship of the god Janus.

After five years of rule, the sons of her two elder sisters, Margan, the son of Maglaunus and Cunedagius, the son of Henuinus, resented being ruled by a woman and launched a rebellion laying waste great swathes of the realm. After several bloody battles they captured Cordelia and held her in prison. In grief and sorrow at the loss of her realm, she committed suicide.

The story of King Leir and Cordelia has inspired many works of art and literature through the ages the most famous being William Shakespeare’s tragedy, King Lear, which remains as popular as ever.

Queen Cordelia of the Britons

The True Chronicle History of King Leir, 1605 – The British Library