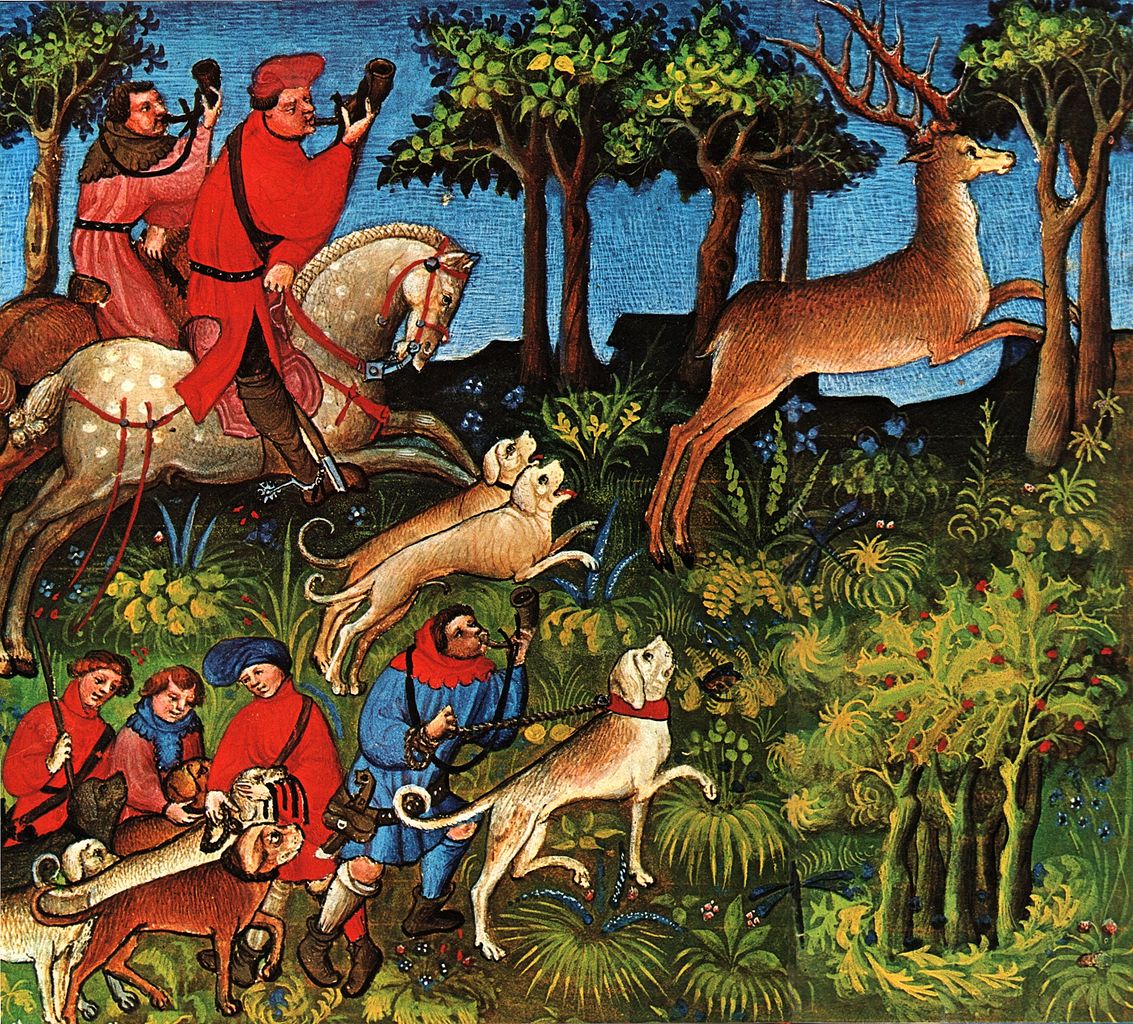 After falling foul of the authorities for poaching deer, William of Cloudesly, Adam Bell and Clym of Clough ranged Inglewood Forest as outlaws. William had a wife and three children and began to miss them badly. They lived in Carlisle and he knew it would be dangerous to visit them, but told his friends that he had to take the chance. They were aghast, and tried to dissuade him, but he would not listen, and, promising to be careful, set off for Carlisle.

As night fell, William made his way to the family home and tapped quietly on the door. His wife, Alice, let him in, and William joyfully embraced her and his children. It was a very happy family that evening — but there was one in the home who was not family, yet  terribly interested to see William’s return. Before William was outlawed, purely from the goodness of his heart, he had taken an old woman into his home, giving her food and a bed for free. Seeing he was back, she crept out and reported his presence to both the Magistrate and Sheriff of Carlisle, who rewarded her with a scarlet dress.

The Sheriff enlisted a gang of men and besieged William’s home. William, with stout support from Alice, defended the house, keeping the attackers at bay.  The Sheriff ordered the place to be set on fire, forcing the man to lower his children through the upstairs windows to safety using knotted sheets. Alice at first refused to go, wanting to die at his side, until William pointed out the children would have no one to take care of them, so she reluctantly agreed.

Once alone, William put up a fierce resistance, shooting many of the attackers with arrows. Eventually, the smoke and flames forced him to jump through the window into the crowd below, where he was overpowered. Taking no chances, the Sheriff ordered that all the city gates be locked to deter any possible escape, and instructed carpenters to build a gallows.

Many people were appalled by William’s capture. One man sent his son through a small gap in the city walls to seek out Adam and Clym, telling them of their friend’s predicament. The pair found the boy, who told them the news, and set off immediately. Arriving at the city gates they found them locked, but Adam quickly worked out a plan. Knocking loudly upon them, he shouted imperiously for the gatekeeper. When he arrived, Adam declared that he and Clym were the King’s messengers. Pulling out an official looking document from his cloak, he waved it before the startled gatekeeper who — unable to read, let them in. Once inside the two men bound and gagged him, locking him in the gatehouse. Taking the key to the gates, they stole through city in search of their friend.

The Fight for William

In the marketplace at sunrise they saw a newly erected gallows. Nearby, standing in a horse drawn cart, was William; his hands tied behind his back and surrounded by guards and a large crowd.  As the Sheriff began to give the order for execution however, an arrow struck him though the heart while another killed the Magistrate, causing the crowd to panic and flee in all directions. Taking advantage of the confusion Adam and Clym quickly cut their friend free. The Mayor of Carlisle arrived and quickly enrolled men to seize them, dead or alive.  Adam and Clym fired off all their remaining arrows, killing the Mayor, and the three fought their way to the gates.  Adam unlocked the gates and they made for the sanctuary of Inglewood Forest.

After Alice had been lowered to safety, she quietly led the children out of the town, managing to escape before the gates were locked. She took them to the Trysting Tree, the oldest tree in Inglewood Forest, where William and his friends would meet. There, huddled together weeping in grief and fear, William with his friends found his beloved family.

Adam and Clym went hunting o give the family space, bringing back sufficient game to provide a feast for all. The three friends discussed what they should do next as they ate. They knew that King John would want revenge for the killing of the Sheriff, Magistrate and Mayor, and then come after them.

William decided he would travel to London and ask King John for clemency before the news of the battle of Carlisle reached him. With his mind made up, he left Alice and two of the children at a nearby convent. Taking his eldest son, and accompanied by Adam and Clym, he travelled to London.

Finally, arriving at the palace of King John, the men brushed the royal guards aside and marched up to the throne, kneeling before him begging for clemency for the killing of his deer in his Royal Forest of Inglewood and for the battle of Carlisle. King John angrily told them they would hang. Adam tried to reason with him, respectfully pointing out they had come of their own free will. John remained unsympathetic, insisting they would hang. The Queen reminded her husband that he had promised her a wedding present of her choice at the time of their marriage. She had yet to claim it, and requested her gift be clemency for the three men.

Her husband rolled his eyes but granted the request. No sooner had this been done when messengers from Carlisle rushed into the palace with news of the violent events back in the city. King John looked intently at the three men, marvelling at how they had fearlessly presented themselves before him and wondered what manner of fighters they were to have caused such havoc. He ordered that a series of archery tests be set up. The three friends easily passed these, and William suggested something harder, asking the King what would he think of an archer who could split an apple from the head of his son at six score paces? The king incredulously told him he should like to see it done but warned should he fail, or harm his son then all three would hang. William tied his son to a stake telling him to stand perfectly still with his eyes closed, and stepped out six score paces.  Begging for complete silence he took aim and let fly an arrow which cleaved the apple in two, leaving his son unharmed.

King John was so impressed he employed William as his archer and made him his rider in chief over the north of his kingdom. The Queen employed Adam and Clym in her personal guard and sent for William’s family, and Alice was made the governess of the Royal children. William, Adam and Clym gave thanks to the king and queen and went to church to show gratitude for their good fortune and spent the rest of their lives in the service of the royal couple.

William’s desire to see Alice and his family puts him in danger, but it is the betrayal by the old woman that sparks the action. The Queen becomes the saviour of the outlaws: without her intervention they would have been hanged. She also becomes their benefactor, bestowing gifts and status on William and his wife while reuniting the family and rewarding his friends, while staying the hand of an all powerful king. When we look closely, the triad of females are all acting in unison with one another.

Although it is tempting to see the old woman as the villainess of the piece, it is her betrayal that inspires the events in Carlisle which cause William and his friends to seek clemency, and in doing so wins the favour of the King, and the Queen in particular.

Some people today see the triad of females — Alice, the Old Woman and the Queen — as aspects of a kind of triple goddess looking after William and his family and friends, and perhaps reminding us that events in the present we perceive as being negative, disruptive or dangerous may in fact be designed for our benefit.

The Outlaws of Inglewood Forest

Adam Bell, Clim of the Clough, and William of Cloudesley: Introduction