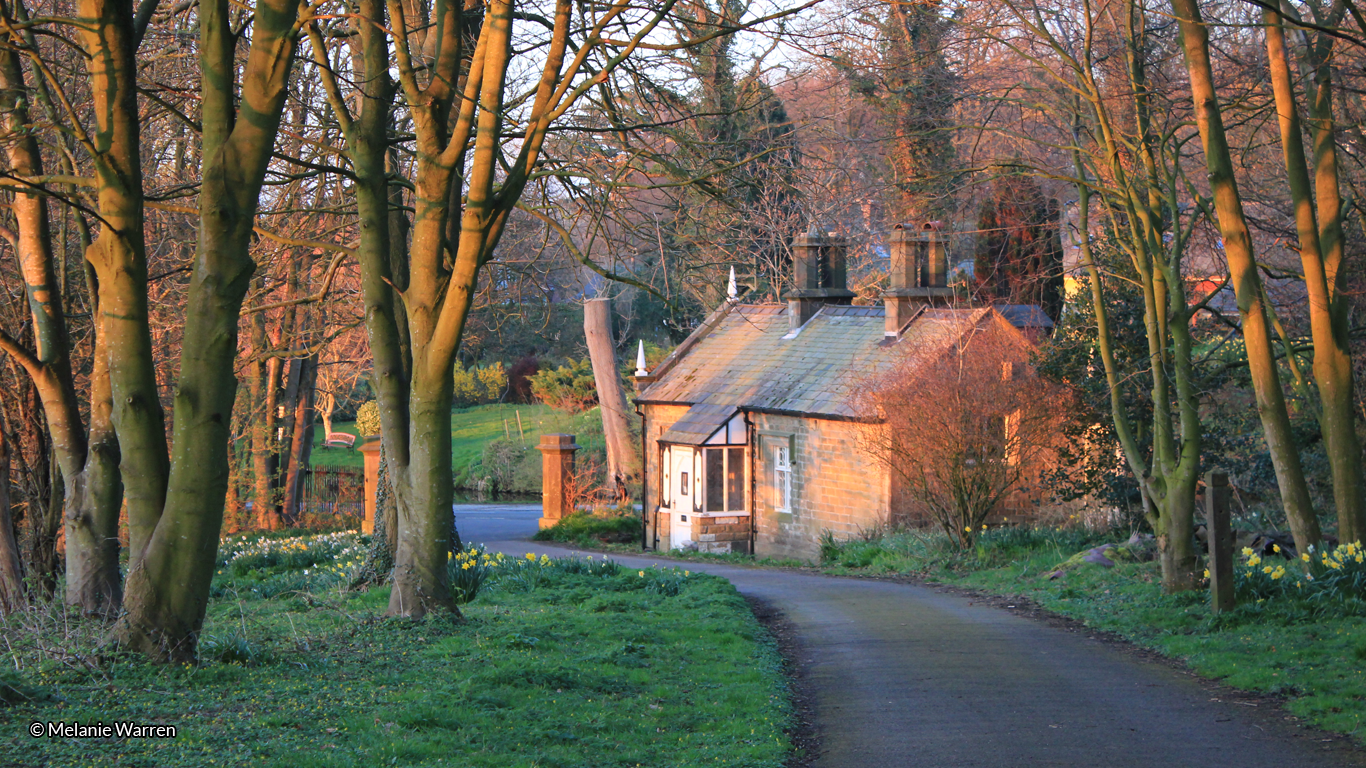 There’s a story from Clitheroe, in Lancashire, which tells how a midwife was once called upon to attend a woman in her labour. She was told by the woman’s husband that secrecy was paramount, and she must wear a blindfold for the journey to his home. He promised to pay her handsomely, so she agreed. She was taken to a tidy little cottage at Hodder Gorge where she assisted at the birth of a fine baby.

When the baby was born, an old woman in the cottage gave the midwife a box of ointment and asked her to anoint the baby all over – but to be careful not to get any of the ointment in her own eyes. The midwife wondered at this, but did as she was told, until her eye started to itch and she could not avoid rubbing it and a little of the ointment thus made its way into her eye. Then she saw the place differently; the tidy cottage was actually a cave and the mother of the baby was clearly a fairy, as were the husband and the old woman. The midwife managed to stay calm and did not give away her secret. She was paid in fairy gold, blindfolded once again and taken home.

‘Which eye do you see me with?’ he asked.

‘The left one,’ the midwife answered. The fairy immediately touched her left eye and from that time on, the midwife never saw fairies again.

It is always a joy to discover the same story in different places, and since finding this Lancastrian story I have found the same tale in a surprising number of places from Northumberland to Devon. Doubtless there are more versions still to find and I have long since given up asking which version came first; that is a question for the academics and I am merely a collector.

In Devon, the story says a midwife from Tavistock is about to go to bed when she is summoned by a fairy. She is taken on a black horse to a neat cottage, where she finds a woman in labour. In this version of the tale the fairy is ‘a strange, squint- eyed, little, ugly old fellow’ and the baby’s mother asks the midwife to put ointment on her new baby’s eyes. The midwife thinks this an odd request, and so tries the ointment on one of her own eyes to be sure that it is safe. The effect is the same as in the Clitheroe story; the midwife immediately sees that this is a house full of fairies.

Later, at market selling eggs, the midwife sees the fairy husband stealing openly because he thinks himself invisible. When the midwife speaks to him, he asks which eyes she sees him with, hits that eye and blinds her! An ending which is a little harsher than the first…

In Yorkshire, the same tale is told with a few variations. A woman from Keighley, selling butter at market, is accosted by a little man who asks her to follow him to a cave, where she is asked to help the little man’s wife as she gives birth. Then another woman anoints the baby’s eyes and the Keighley woman, guessing that this ointment is ‘seeing magic,’ secretly dips her finger in it and touches her own eye.

Some time later, she sees the same little man stealing corn at market. She asks after his wife and baby and, as in other versions, he blows in that eye to remove the ‘seeing magic.’ This same gentle remedy occurs in another version of the story based in Stowe, in Suffolk.

In Netherwitton, Northumberland, the story is quite different; it does not feature a midwife at all. This time, a fairy couple give their fairy baby into the care of a man (whose wife is never mentioned). He is given a pot of ointment and told to rub the baby’s eyes regularly, but under no circumstances to get any in his own eyes or he will regret it. Naturally, he tries the ointment himself and is confused when nothing happens…  Then, he visits Long Horsley Fair and spots the fairy couple in the crowd (not stealing…). They are shocked when he sees and speaks to them, so they blow in the affected eye and blind him. This harsh ending is made even worse when the man returns home and finds that the fairy baby is gone.

I was particularly intrigued when I found the same story set in Llangefni, Anglesey, as Welsh mythology tends to be specific to that country. Did the story start there, or was it adopted from nearby English storytellers? It has all the same elements but with the notable difference that the labouring woman is mortal and the midwife a fairy, whereas in English versions they are the other way around.

A farmer goes to Llangefni in search of a midwife, and the one he finds is one of the Tylwyth Teg; the Welsh tribe of fairies. He takes her to his house on horseback and, after the baby is born, she gives him a pot of ointment with which to anoint the baby. She then disappears. The farmer gets ointment in his eye quite by accident, but it has no effect so he thinks nothing of it until he visits Llangefni again and sees the fairy midwife. He speaks, and she asks which eye he sees her with, then pokes her stick into it and blinds him.

So far we have seen the ‘sight’ removed three times and actual blindness inflicted three times. I confess I do wonder which of these came first; was the story softened for young listeners, or was the physical blinding added for its shock value?

Returning to Lancashire, the last story I have collected is based in the Fylde but this time there is no midwife at all.  There is, however, a baby, a fairy, and the ever-present magic ointment. The baby is losing its sight and its mother has carried it to a spring somewhere between Hardhorn and Staining; a spring whose water is reputed to cure ailing eyes. At the spring, she meets a little man who gives her ointment which he says will definitely cure her poor child’s eyes. But only after testing the ointment on her own eye does the woman apply it to the child.

At Preston Market, the woman sees the little man again (and yes, he is stealing) so she approaches him to thank him for restoring her baby’s sight. He questions her, and she points at the eye which sees him… and I’m sorry to tell you that this is the fourth version of the story which ends with someone being blinded.

Quite why fairies should need the aid of human midwives is a bit of a mystery, given their magical natures, but the story says they do so we must believe it. On balance, given the number of times the fairies blind the hapless humans, the moral of the story of the Fairy Midwife and the Magic Ointment seems to be that if you ever meet a fairy yourself, and if he/she ever gives you some ointment, follow the instructions to the letter and be very careful what you do with it. Fairies may often be kind and helpful but, as these stories make clear that they can also be ruthless!