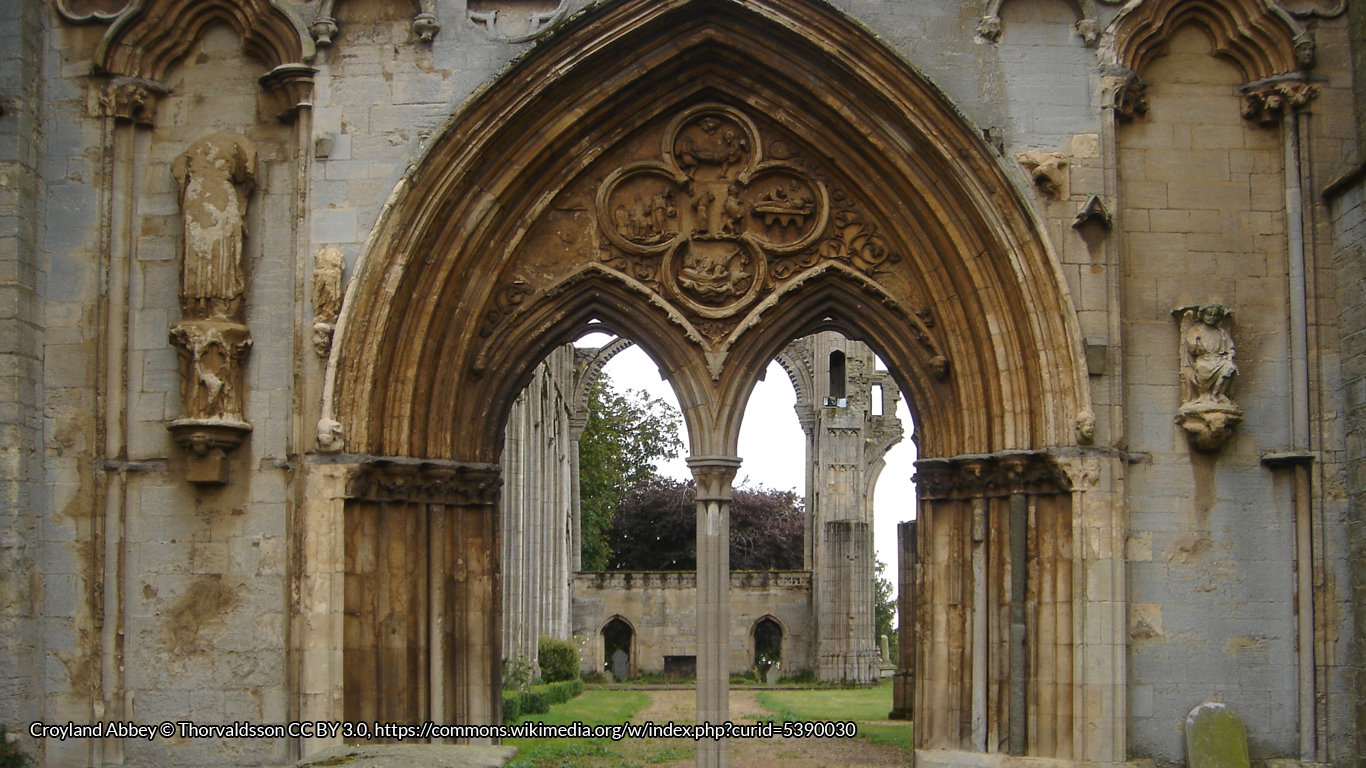 The Folklore of Bells

The Book of Genesis says Tubal-Cain’s brother Jubal was inspired to build musical instruments after hearing Tubal-Cain’s hammer ringing on his anvil. It may be that Jubal constructed bells to replicate this musical sound. Certainly, small bells were anciently used for many purposes, including religious, but the large bells we associate with Christian churches were not invented until the 5th century. It is said that their inventor was the missionary St. Paulinus in Campania (hence the term campanology), but these large bells only came into general use around two centuries later. They were tolled to call the faithful to prayer on any number of religious days and to mark births, marriages and deaths, but did they have a meaning beyond the purely practical? The many legends attached to them would seem to suggest it.

Crowland (or Croyland) Abbey in Lincolnshire is known to have had a ring of bells as early as the 9th century, and they had replaced an earlier set. The interesting thing is that these bells were all named after a variety of saints and abbots. This custom was common. The bells’ names were often inscribed upon them and, indeed, their installation was ceremonial, in the manner of a baptism. Possibly the oldest benediction ceremony can be found in the Gregorian Sacramentary, which dates from around 590 AD. A description of a ceremony from the year 1700 AD says that the bells were anointed with both holy water and holy oil in the sign of the cross, in order to make the Devil flee when the bells were sounded.

Perhaps we should not be surprised then that bells blessed and baptised in this way should inspire the belief that they had magical powers. The mere sound of bells was believed to somehow purify the air, and so could drive away pestilence and plague, and when women were in labour, church bells were sometimes tolled (for a fee) in order to speed their delivery. The Church’s belief that the Devil feared the sound of bells became extended by the people to include all evil spirits, so that the tolling of the ‘passing bell’ served two purposes; to announce the death of a person and invite prayers, and secondly to frighten away spirits who might be lying in wait for the newly-departed soul. The greater the fee paid, the louder the bells, so that the spirits might be driven farther away. In Lancashire, once the burial was over, a merry peal would be rung in order to encourage angels and discourage evil spirits – this custom was in practice well into the 19th century. 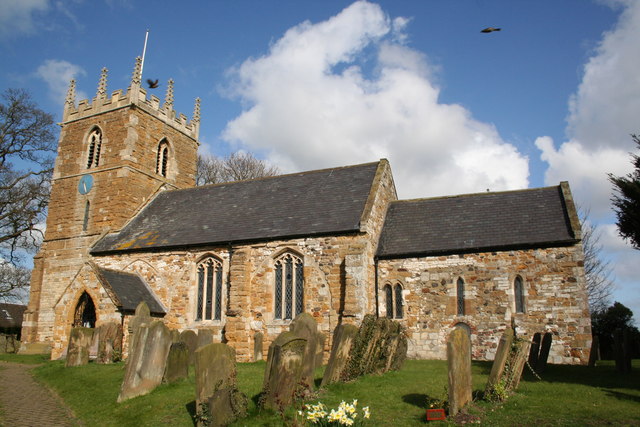 Similarly, when thunderstorms approached, the bells were rung to invite prayer, but the people extrapolated this into a belief that the very sound of the bells could prevent damage from lightning. Evidence to the contrary – that tall steeples holding bells were natural attractors of lightning – did little to destroy this belief. In A Book About Bells the Rev. George Tyack notes that in Brittany, on Good Friday of 1718, a violent storm broke out and lightning struck no less than twenty-four churches, despite their defensive bell-ringing, whilst churches who did not sound their bells emerged from the storm unscathed.

Many childhood rhymes speak of bells whose chimes actually talk; we all remember the rhyme which begins: ‘Orange and lemons, Say the bells of St. Clement’s.’ The bells of North Thoresby church say repeatedly, ‘Who rings best?’ and the bells at the neighbouring village of Grainsby reply ‘We do! We do!’. All over Britain, local rhymes describe what the local bells say to each other. And so the bells come to be anthropomorphised still further, able to operate without human intervention, even after they have ceased to exist. In Romford, Kent, it is said that the bells of the old church can be heard ringing out on St Andrew’s Day – even though the church was demolished in the 15th century. Near Kirkby Lonsdale in Cumbria, there is a place where a whole village is said to have disappeared into the ground, but this calamity did not prevent the holy bells from ringing on Sundays. The bells of an ancient chapel now covered by Crosmere Lake in Shropshire still ring when storms approach.

In Forrabury, Cornwall, the long-awaited bells for the church were brought by sea, but the ship which carried them had to wait for a change in the tide to enable it to enter the harbour. The captain spent his time in praise to God for their ship’s safe passage, but was ridiculed by his companion who said that praise was due only to his own skill. Suddenly a storm blew up, the ship was rocked and overturned, and sank to the bottom of the sea, taking with it the precious bells. The captain who had prayed survived, but the precious bells were gone, their magical sounds to be heard forever after only by fishermen on stormy days. And in Lancashire, a tiny hamlet called Kilgrimol was engulfed by the same storm that destroyed the Spanish Armada – but on stormy days, the chapel bell can still be heard…

As evidence that the Devil hated the sound of church bells, it is said that Towednack in Cornwall never did complete its bell-tower, for each night the Devil destroyed the work that had been done that day. In Norfolk, the bell-tower at West Walton stands at a little distance from the church because the Devil moved it there. A story from Tunstall in Yorkshire tells how the church bells were taken down after a fire damaged the church. A fierce argument broke out over who actually owned the bells, an argument which continued until the Devil himself appeared and carried the bells off to a bottomless boggy pool called Hell-hole, where he and the bells disappeared into the murky depths. Visit Hell-hole today and you will see bubbles rising to the surface, sure evidence that the bells are still slowly sinking…

Fairies, also, had a dislike of church bells, because they were so disturbingly loud compared to their own tiny tinkling bells. At Inkberrow, Worcestershire,  the church was dismantled at some point in antiquity and rebuilt on a different site, which was unfortunately inhabited by fairies. The fairies were so disturbed by the idea of church bells ringing out so close to where they lived that they tried in all manner of ways to prevent the work from going ahead, but they were unsuccessful. The fairies were forced to move away, and were never seen in that place again. 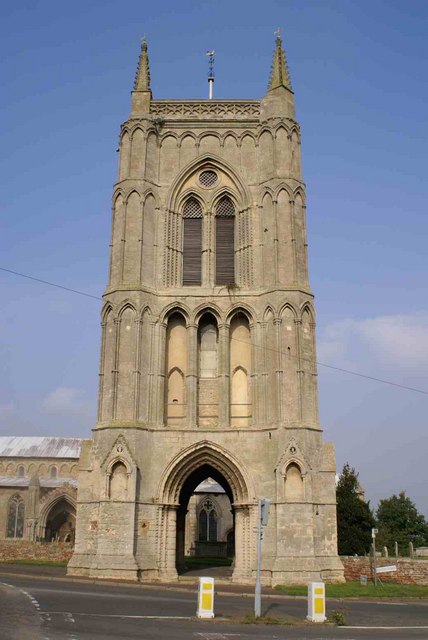 Many legends of saints include bells in one way or another. St. Catherine was searching for a place to settle and received an angelic message that she would find the place when she heard bells ringing – Ledbury was the place, and the church of St. Martin and All Saints was where she settled and lived as an anchorite. In Llandaff, the 6th century St. Odoceus asked some butter-maids for water to slake his thirst; they had no cup so he took some butter, fashioned a bell and drank from it. The bell turned into gold and was renowned for its healing powers. Another bell known for its healing properties was that owned by St. Mura, a 7th century Irish saint. This small silver hand-bell was actually silent, for the legend tells us that it came down from heaven, and its clapper was immediately taken back there. The bell is now in the Wallace Collection in London.

Another bell known for its healing ability is mentioned in Sir John Sinclair’s Statistical Account of Scotland, written in 1778. He noted that in St Fillan’s Chapel, Perth, there was a bell which could cure depressions and madness. The afflicted would first wash in the Saint’s Pool, which one assumes was a holy well nearby, and then the bell would be placed on his head. One assumes that this bell was of no great size. Sinclair noted that the bell was safely locked away when not in use, but in older times it had lain quite openly in the graveyard, for it was believed that if it were ever stolen it would come back on its own. In Lancashire, the idea that bells had healing properties became part of local custom. In the old days it was usual to give a new-born baby a bell made of coral, blessed by a priest. Coral itself was thought to protect against witchcraft, and the blessed bells would keep bad spirits at bay.

If, after all this, you are ever faced with the task of caring for or disposing of church bells, remember what reverence is shown to them and what superstition they attract. When the Danes invaded Worcestershire, one of them was caught in the act of stealing a church bell. He was killed for his sacrilege, then skinned and his hide nailed to the door at Worcester Cathedral!

Melanie Warren has collected British folk tales and ghost stories for almost four decades. For many years, she was a paranormal investigator and took part in innumerable ghost-hunts but never saw a ghost, although she did have several experiences she finds hard to explain… She was also BBC Radio Lancashire’s resident “paranormal expert” and co-authored two collections of ghost stories, which were broadcast on BBC local radio stations. Melanie is now concentrating on turning her extensive collection of stories and tales into a series of books, one county at a time. Melanie lives in Lancashire and has done so all her life. Her book, Lancashire Folk, is available from booksellers including online, but also directly from the distributor, Gazelle Books. Read more on Melanie’s website.

Bloodletting and Bleeding: The History and Legends of This Health Cure

Passing Through & Under: A Ritual Healing in England