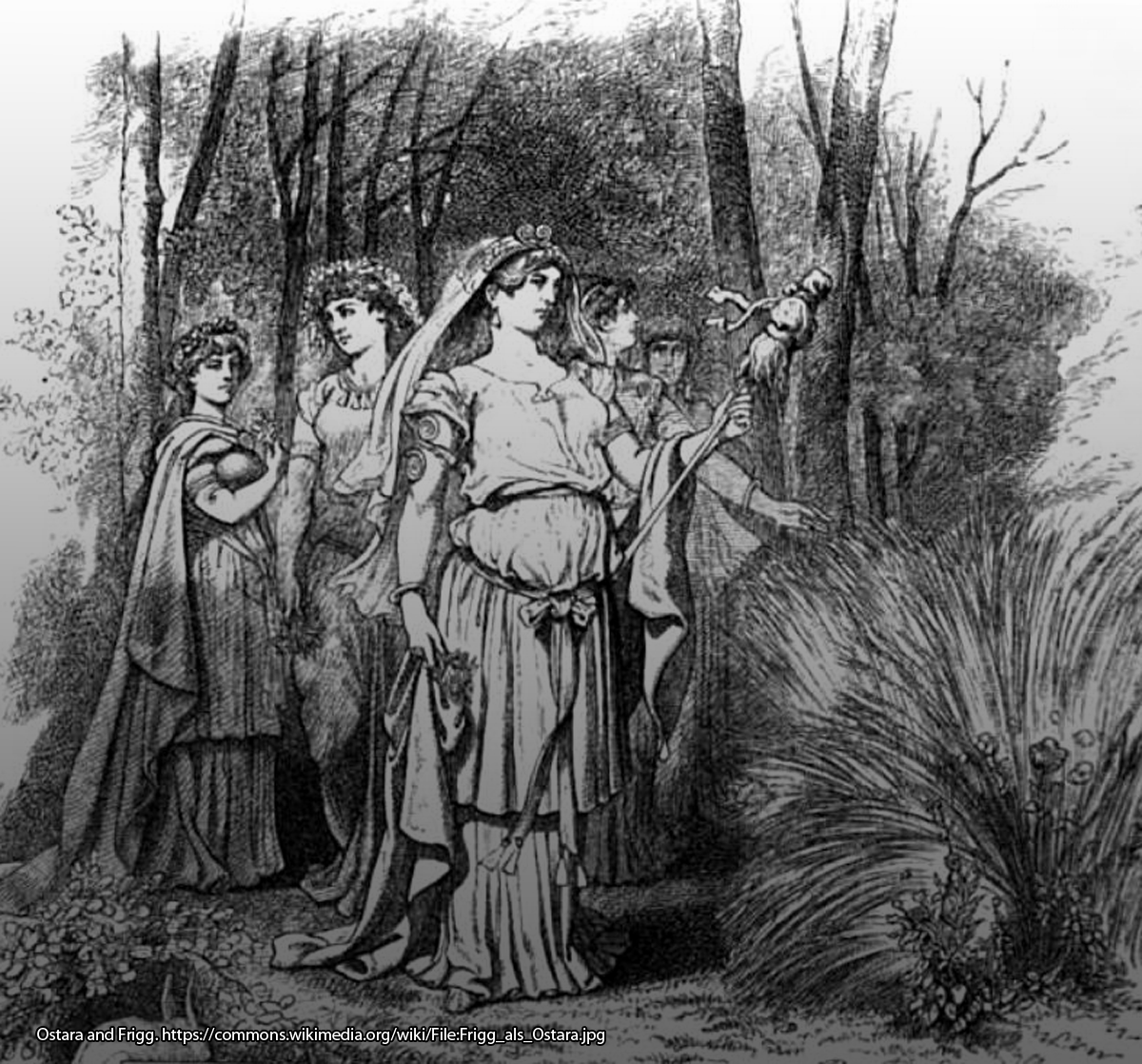 Easter customs of old were many and varied but who would have expected so many of them to be nothing short of violent? Some believe Easter is named after the pagan spring festival celebrating Ēostre or Ostara; historically known as the spring equinox, this might explain why the date of Easter is calculated by the cycles of the moon. It falls on the Sunday following the full moon after the first day of spring — nothing Christian about that calculation! One would have thought the dates of Christ’s death and resurrection would have been more definitely commemorated but, no, we stick to celebrating the coming of spring. Compared to this oddity, some of the bizarre customs associated with Easter stop seeming so bizarre. The violence involved in some of them, though, is a little harder to explain…

In East Lancashire, a long time ago, the streets were plagued by a kind of hobby-horse made from the skull of a dead horse, with bottle-bottoms for eyes and nails for teeth. The contraption was worn over the head and had a lever to snap its jaws. This ‘horse’ (which resembles the Welsh Mari Lywd) was nicknamed Old Ball, after the common name for a carthorse. Sackcloth or cow-skin hid the operator, who would snap the monster’s jaws to make women scream and terrify their children. Several people suffered defensive injuries to their hands.

In Shropshire, Cheshire and Lancashire, young men would tour the towns on Easter Monday. carrying a ribbon-covered chair, intent on ‘heaving’ or ‘lifting’ young women. On the Tuesday, it was the girls’ turn. The chosen person would sit in the chair and be lifted skywards three times, accompanied by noisy cheers. Those too shy to take part had to allow a kiss or pay a fine of a shilling – but did receive a note excusing them from further lifting attempts. This was a very ancient custom; indeed, a document describes how Edward I’s bedchamber was invaded by the Ladies of the Queen’s Chamber. He paid a hefty fine to avoid the indignity.

By the 19th century the chair had been cast aside, the original meaning (a symbolic raising-up towards Heaven) forgotten and the custom had degenerated into rowdiness. The lifters simply grabbed all four limbs and hoisted the unfortunate person aloft. A mild bespectacled schools inspector was mortified when he was forcibly carried through the town of Warrington, afterwards being kissed all over. A factory inspector took great offence at being ‘lifted’ against his will and one factory girl had her arm broken when she was thrown in the air and nobody broke her fall. Her case went to court and the custom was banned. Probably a good thing!

Another custom was to attack members of the opposite sex and steal the girls’ shoes, or the boys’ caps, demanding money for their return. The money was used to provide a special cake flavoured with tansy, distributed at an evening dance, but the thefts themselves did sometimes cause distress. In Yorkshire, it was deemed quite acceptable for children to trip up their young friends! The cries of accusation were countered by the reminder that it was Easter Monday, so it was allowed.

One custom, ‘Nippy Hug Day’, was common in the Midlands until as late as the 1940s. Also known as ‘Kissing Friday’, it occurred on the Friday after Ash Wednesday when young men were free to demand a kiss from any girl they met. No fines were involved, but the choice was between a kiss and a pinch on the bottom.

Even domestic violence was overlooked at Easter, at least in the North East of the 19th century. On Easter Tuesday, wives were allowed to beat their husbands. On Easter Wednesday, men could take their revenge. We should be thankful that this custom has died out!

Slightly less violent, but no less inexplicable, was the custom amongst the clergy of playing hand-ball in church. It seems a terribly boisterous pastime to allow inside a sacred building. The clergy’s only explanation was that it in some way reflected the ‘triumphal joy of the season’.

Football games were also seen, all over the country, huge affairs between teams comprising whole villages, their respective church steeples being the goals. Rules were irrelevant as hordes of men barrelled through the fields and, of course, injuries were common. In Workington, the goals were a mile apart and team members numbered in their hundreds. In some parts of the country the great football game took place on Shrove Tuesday, but in Devon it was always Good Friday and was more like rugby than football.

The town of Ashbourne in Derbyshire still follows this custom by staging a Shrovetide football game between two massive teams; those born on one side of Henmore Brook versus those born on the other. The game begins at 2 pm on Shrove Tuesday and finishes late on the evening of Ash Wednesday. Ashbourne shops board up their windows, just in case!

In Tudor times, at the beginning of Lent, boys would make large effigies out of old clothes stuffed with straw, with herring-skin faces and hands. A terrifying mental image. The effigy was called a ‘Jack o’ Lent’ and represented Judas. Throughout Lent, boys would delight in hitting it with sticks, throwing mud and rubbish at it and finally, at Easter, burning it.

This custom was repeated in many Christian countries and certainly in Greece, where the burning of an effigy of Judas at Easter was common. Guns were also fired, repeatedly, in an effort to ‘kill Judas’. Only blanks were supposed to be used but this celebration resulted in so many fatalities that the custom was eventually banned by the Greek Government!

In Ashton-under-Lyne, in Manchester, until quite recently, an effigy of a knight dressed in black is paraded through the town on horseback. In older times the audience would throw dirt at it as it passed and, at the end of its journey, burn it. The knight in question was the 15th century Sir Ralph Ashton, nicknamed the Black Knight after his suit of black armour, and who was particularly heartless when dealing with his tenants. As an example of his tyranny, he noticed one day that marigolds grew abundantly in his tenants’ fields and levied a tax on those who allowed them to grow!  He was eventually killed in the street either by a relative or one of his tenants, depending on which source one reads. The Easter ceremony which celebrated this event was known as ‘Riding the Black Lad’.

I have been saving the best for last. There is absolutely no explanation I can think of to explain the following custom, which used to happen every Easter at Northmore, in Oxfordshire. Violence is at a minimum here, but this is surely the strangest event yet. After the evening service on Easter Sunday, parishioners would gather in the churchyard to gaily throw apples at each other. To add to the oddness, newly-married couples were allowed to throw three times as many apples as anyone else. When all available apples had been smashed, everyone would retire to the Minister’s house where a small repast of bread and cheese awaited them. If anyone can explain how or why this little custom originated, I would love to hear!