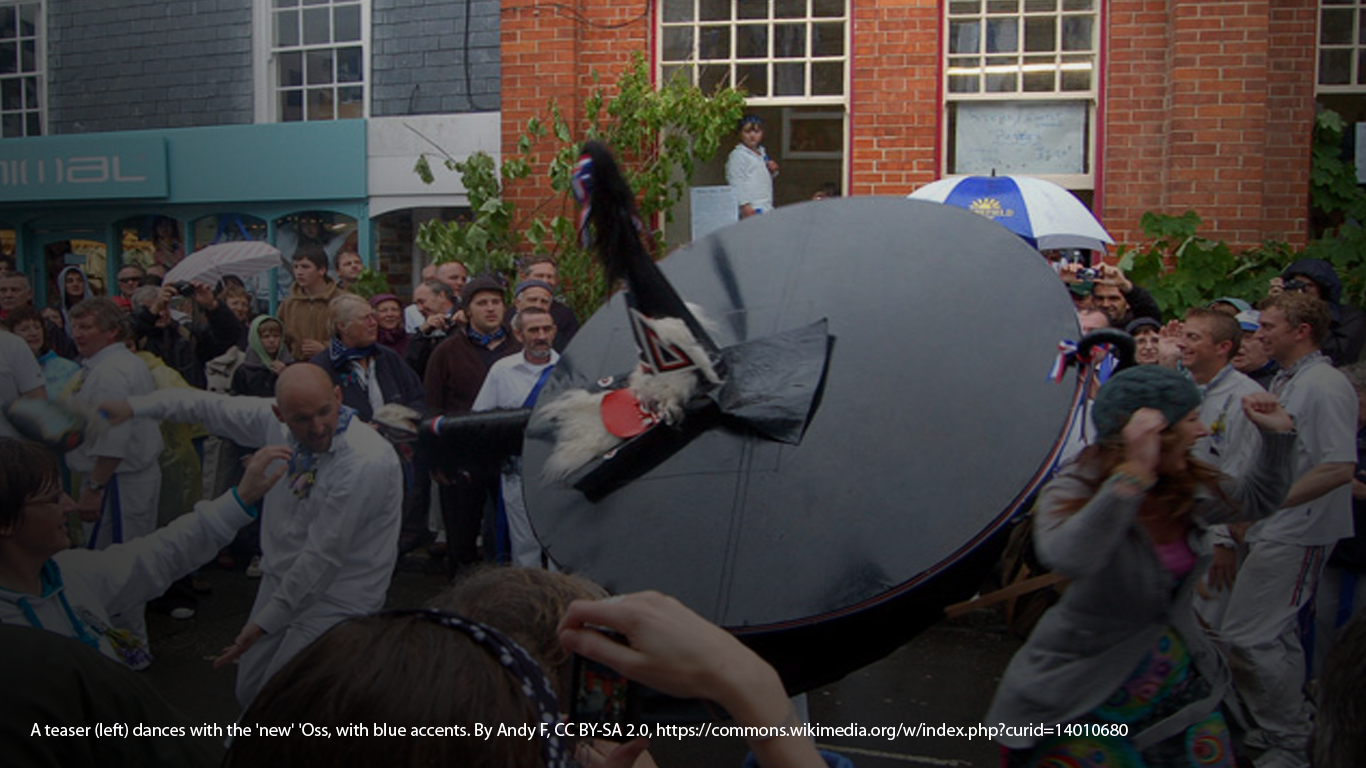 A horse or a dragon? Anyone who has seen May Day’s ‘Obby ‘Oss of Padstow may conclude that it looks like neither.

Whatever the May Day festival in Cornwall’s Padstow represents, all can agree it is remarkable. The celebration has captured the attention of folklorists for over a century. The star of the event is a Hobby Horse – ‘Obby ‘Oss in the dialect of south west Britain – a peculiar-looking structure that conjures a carnival-like image more than that of the noble horse. As folklorists Jacqueline Simpson and Steve Roud observe: ‘There is nothing like it in the English calendar’.

The tradition begins at midnight when people gather outside Padstow’s Golden Lion Inn, where the ‘Obby ‘Oss is ‘stabled’ – meaning, where it is stored throughout the year. Participants sing the ‘Night Song’ as April yields to May with the promise of warmer days:

Unite and unite and let us all unite,
For summer is acome unto day,
And whither we are going we will all unite,
In the merry morning of May.

I warn you young men everyone,
For summer is acome unto day,
To go to the green-wood and fetch your May home,
In the merry morning of May.

There are other verses which describe the need to arise and celebrate. With this prologue to the event, organizers busy themselves with erecting a May Pole and decorating the town with flowers and green tree branches, cut from local groves by the young men of the community.

In the morning, the ‘Obby ‘Oss emerges. It consists of a large round platform supporting a black apron. The man who carries the beast puts his head through a whole at the centre of the structure. He wears a mask with a tall pointed cap, a menacing otherworldly image. At one end of the platform is a tail and at the other, a stylized head with snapping jaws. Simpson and Roud have noted that, ‘by no stretch of the imagination does it look like a horse’.

The costume-wearing man cavorts along the streets, accompanied by a ‘teaser’ who leads the ‘Oss in a traditional dance to the sound of accordions and pounding drums as the participants sing the ‘Day Song’. This begins much like the Night Song, but added verses include the following:

All out of your beds,
For summer is acome unto day,
Your chamber shall be strewed with the white rose and the red
In the merry morning of May.

The Padstow celebration was first described in print in the early 1800s; it seems clear that by then it was an established, old tradition. Over the years it has evolved. The ‘Obby ‘Oss was originally painted with blacking that would rub off on participants, a sign of good luck for the coming year. Now, there is far less mess with no gleaming white clothes ruined by dark smudges. The creature’s snapping jaws are appeased with coins, once used by revellers to fund their drinking, while now money raised goes to charity. There remains a lingering belief that any woman captured beneath the apron of the ‘Oss will be married or pregnant within the year.

Early in the twentieth century, a second ‘Oss was introduced. After the Great War, it became known as the Peace or Armistice ‘Oss, but it seems its celebrants initially drew inspiration from the Temperance movement. Decorated with the colours of the Union Jack, promoters of this second ‘Oss refer to themselves as the ‘Blue team’, distinguished from the ‘Old ‘Oss, where the colour red accents the white clothes of attendants and the predominantly-black beast. The Blue and Red teams parade along different routes, converging on Broad Street where Padstow’s May Pole stands tall with brightly-coloured decorations, ready for a round of singing and celebration.

One of the peculiarities of Padstow’s May Day is that each ‘Oss occasionally dies along the route, sinking to the ground with music gone silent. At that point, the crowd sings a nonsensical dirge:

O! where is St. George,
O! where is he O,
He is out in his long boat on the salt sea O.
Up flies the kite and down tails the lark O.
Aunt Ursula Birdhood she had an old ewe
And she died in her own Park O.

This, together with coaxing from the teaser, inspires the ‘Oss to rise, resurrected like the green of the wood and the flowers of spring, to renew its vigorous journey along the streets of Padstow. Simpson suggests that this element – together with its general appearance – marks the ‘Oss as being decidedly unlike a horse. As the esteemed folklorist further notes, there ‘is a faint whiff of dragon that can be discerned. … At Padstow, St George has somehow got himself mixed up in the traditions’ both with this verse and with a story that the great dragon-slayer came to Padstow once and a ‘spring gushed out where his horse pawed the ground.’ The Padstow tradition included leading the ‘Oss to a pool of water where it would drink and then splash water over the onlookers.

Some have seen in the Padstow tradition shadows from a distant past, perhaps even ties to Neolithic fertility rites. The nineteenth-century Cornish folklorist, Margaret Ann Courtney, asserted that the ‘Obby ‘Oss was ‘no doubt … a remnant of the ancient plays, and it represents the devil, or the power of darkness’. American Folklorist Alan Lomax together with Peter Kennedy and George Picklow asserted that ‘this strange dance is a modern remnant of an ancient Springtime Rite in which primitive man rejoiced in the renewed fertility of the land’. These fanciful suggestions attract a lot of attention and are a pleasure to contemplate, but proof is an elusive commodity.

In a similar way, there is the question about whether the Padstow ‘Obby ‘Oss is a dragon in disguise. As Simpson describes, Britain had known ‘hobby dragons’, which were occasionally ‘associated with Morris Men or, more rarely, with Mummers’. Given this, it is not inconceivable that the terrifying visage of the Padstow ‘Obby ‘Oss is a modern descendent of a dragon, more recently misunderstood to represent a horse. Whether this was the case is unknowable; it is equally possible that horse and dragon traditions converged, one adding momentum to the other. Horse or dragon? In a way it doesn’t matter, for whatever the Padstow tradition is, as Simpson and Roud suggested, the most important thing to consider about Padstow’s May Day is just how unusual it is.

Given all of this, how shall we regard Padstow’s ‘Obby ‘Oss and this remarkable tradition? The easy answer is, simply, to enjoy it: for those unable to visit Cornwall on May Day, an excellent documentary based on footage taken in 1951, remains as part of our international heritage.  Thanks to the efforts of Lomax, Kennedy, and Picklow, one of the classics from the early age of documenting folk practices is available on YouTube: