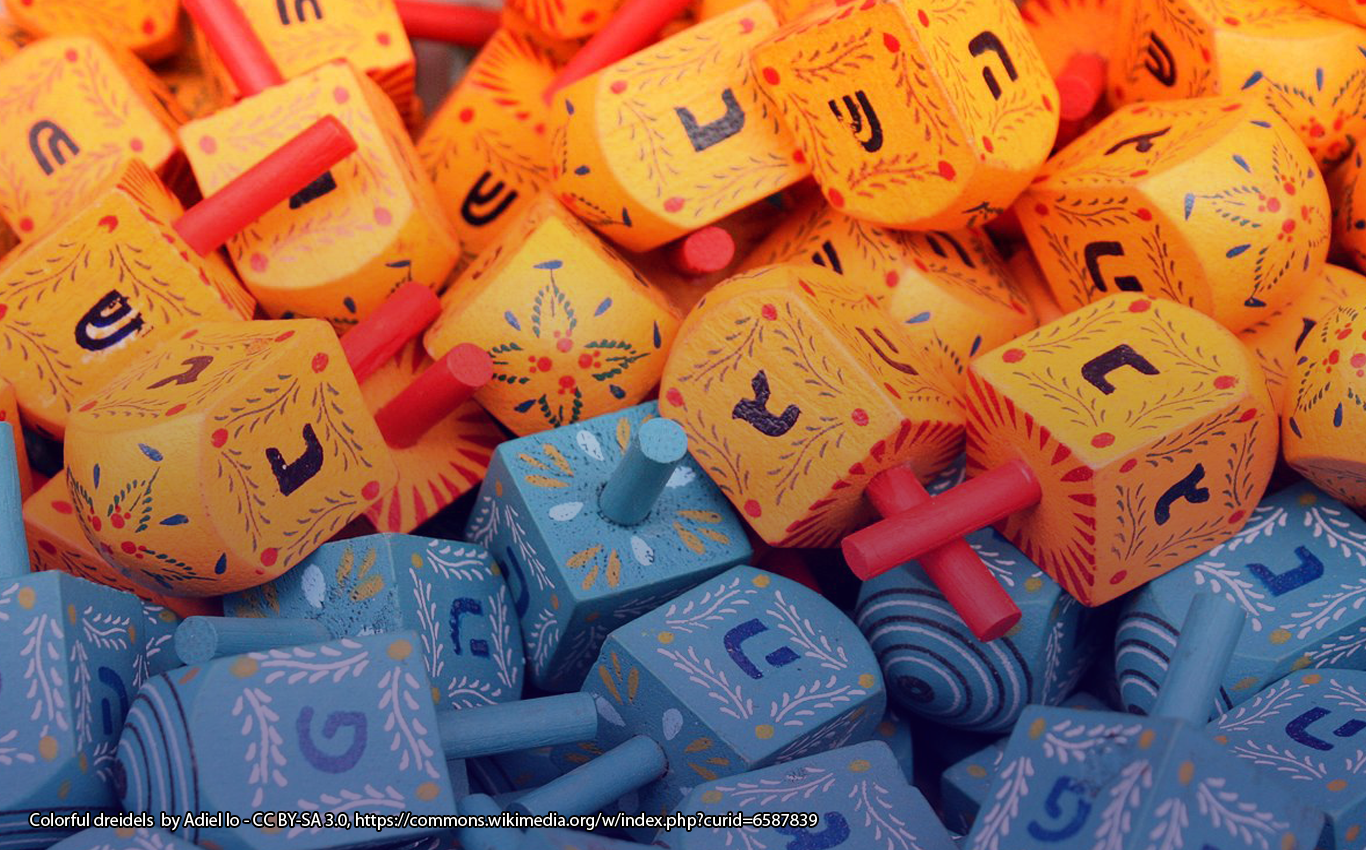 Hanukkah is one of the most celebrated holidays in the Jewish calendar. It’s known by some as the Festival of Light, and usually falls in December each year. Many people outside of the faith know about the traditions of lighting the menorah and giving gifts, but fewer understand the meaning behind these customs.

The temple in Jerusalem

The holiday itself celebrates the victory of the Maccabees over the Syrian army around 165 BCE, more than 2000 years ago. Judaism had been outlawed and their temple in Jerusalem had been desecrated. Desperate to rededicate the temple to God, the Maccabees cleansed everything they could, and searched for a source of oil to light the menorah. Pure olive oil, with the seal of the high priest, was needed to light the menorah, which was required to burn continuously. Legend says that they managed to find a single flask of oil – enough for just one day. But a miracle occurred, and the oil burned for eight days, giving them enough time to prepare a fresh supply of oil and continue the light. An eight-day festival was declared by the Jewish sages.

The menorah, or hanukkiah, is a nine-branched candelabrum. On each night of Hanukkah, a new branch is lit. The ninth holder is called the shamesh, or helper, and is for the candle that lights each of the others. It’s forbidden to make practical use of these candles, which is why a shamesh is used to light the others. Although the lighting of the menorah seems to perfectly associate with the history we know of the miracle, some scholars believe that the custom originated before the story of the Maccabean victory ever included mention of the oil.

The menorah should be placed near a window, so they can be seen by people passing by, reminding them of the holiday’s miracle. This custom changed during periods of antisemitic persecution, when it became a temporary tradition to light the candles near a door, rather than a window. This meant the light couldn’t be seen from the outside and the occupants of the house were protected.

There is also a debate on the correct order for lighting the candles, courtesy of two rabbinical schools, Shammai and Hillel. Shammai stated that Hanukkah should start with the lighting of eight candles, and light one fewer each day, representing the lack of oil. Hillel, on the other hand, insisted that the correct way is to start with one and add another every day, thus increasing the amount of light in the world. Hillel’s method is used by almost every Jew today.

One of the most well-known traditions of Hanukkah is the eating of foods that have been cooked in oil. For those from an Ashkenazi origin (generally from eastern Europe), this is likely to be latkes, which are potato pancakes. But for Sephardic Jews (from the Middle East, North Africa and southern Europe), the tradition includes other types of food, including bimuelos, which are fried dough puffs, and jam doughnuts called sufganiyot.

Although this food choices are an obvious link to the ‘oil in the temple’ story, some scholars also suggest that latkes were eaten because the potato crops become more easily available in Europe around the Hanukkah time of year.

Another custom is the eating of dairy products. This relates back to the story of Judith in the bible, who overcame an invading general by feeding him cheese, which made him so thirsty that she was able to get him drunk on wine. When he was drunk, she cut off his head.

A dreidel is a four-sided spinning top that is played with (by children and adults alike!) during Hanukkah. Each side of the dreidel has a letter of the Hebrew alphabet; נ (Nun), ג (Gimel), ה (Hei), ש (Shin).

Most scholars believe that the dreidel developed from an Irish or English spinning top known as a teetotum, which was popular around Christmas time. The tops were inscribed with letters denoting the Latin words for “nothing”, “half”, “everything” and “put in”. When the custom spread to the Jewish communities, they replaced the Latin letters with their own, keeping the same meanings ascribed.

To play the game, each person starts with an equal number of game pieces, usually something like pennies or sweets. Before each turn, every person places a single piece in the central pot. During their turn, a player spins the dreidel, and takes an action depending on which side of the dreidel is facing up when it stops.

Some claim the four letters to the four ancient empires that tried to destroy Israel – Babylon, Persia, Greece and the Roman Empire. Others, using a complicated numerological process, state that the letters equal the number 358, which is identical to the value of the four Hebrew letters used for Moshiach (Messiah). The most popular association, which only occurred when the dreidel became linked to the Hanukkah tradition, is that the letters form the acronym for נס גדול היה שם (Nes Gadol Hayah Sham – a great miracle happened there). In Israel, the fourth side of the dreidel has the letter פ (Pei) instead, to change the phrase to נס גדול היה פה (Nes Gadol Hayah Poh – a great miracle happened here).

There is also a very cute song associated with the dreidel that has no special meaning behind it, but it’s sweet! This version is by the Barenaked Ladies, who produced an album of holiday music including this one.

Gelt, which translates as ‘money’, refers to the coins – both real and chocolate – that are traditionally given to children during Hanukkah. According to Rabbi A. P. Bloch, the custom originated in the 17th century with the Polish Jews who would give money to their small children for distribution to their teachers.

“In time, as children demanded their due, money was also given to children to keep for themselves. Teenage boys soon came in for their share. According to Magen Avraham (18th century), it was the custom for poor [Torah] students to visit homes of Jewish benefactors who dispensed Chanukah money. The rabbis approved of the custom of giving money on Chanukah because it publicized the story of the miracle of the oil.”

In the1920s, American chocolatiers started producing the first ‘chocolate gelt’, and today it’s one of the most popular items to use when playing with the dreidel.

In Hassidic Jewish communities, the leaders distribute coins to those who visit them during Hanukkah – this is considered to be an auspicious blessing, and a good luck charm.

Due to the its proximity to Christmas, many modern Jewish families have evolved the custom of giving Hanukkah gelt to include gift giving, allowing Jewish children to enjoy gifts in a similar way to their friends who celebrate Christmas. Most parents will either give medium-value gifts every night, or will give small gifts on each of the first seven nights, with a larger present on the final night.

Some Jews in North America and Israel have begun using Hanukkah to raise awareness of environmental concerns in relation to the miracle of the oil, emphasising reflection on energy conservation and energy independence.

In North America, it is tradition for the US President and the First Lady to host a Hanukkah party. The tradition began in 2001 during George W. Bush’s administration, and has continued most years.

No matter whether you’re planning to celebrate the miracle of Hanukkah by eating your favourite fried foods, or by eating as much chocolate gelt as you can get your hands on, we wish you all a חַג שָׂמֵחַ (chag sameach) – happy holiday!