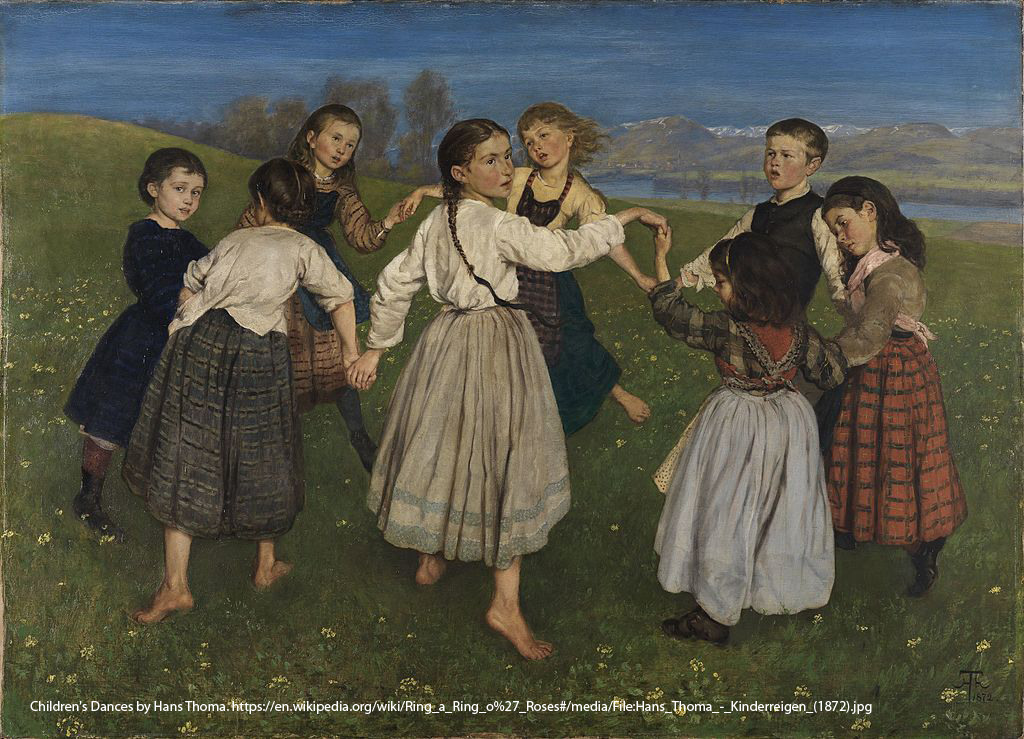 Throughout the UK, young children sing the same nursery rhymes, no matter their age, county, or background. But for me – and, I suspect, other children who also grew up in London – some of those nursery rhymes had a little more geographical importance than others. Like any song or story, these rhymes have a lot more history than many people realise, and, in many cases, it’s a less-than-child-friendly one.

London Bridge is Falling Down

Also known as My Fair Lady or just London Bridge, this is one of the most well-known nursery rhymes. The lyrics as we know them were first written down in the mid-eighteenth century, although the melody we’re most familiar with wasn’t recorded until many years later.

The meaning of the rhyme – at least on the surface – seems quite straight-forward; it relates to the difficulties of building a bridge across the River Thames. Other theories have been offered to its origin, with the most popular one surrounding the supposed destruction of the bridge by Olaf II of Norway in 1014. A translation of the Norse saga Heimskringla included a verse that was similar.

While it’s possible that the translator, Samuel Laing, writing in 1844, might have used his own knowledge of the nursery rhyme to structure the free verse, some historians still believe the Heimskringla could be the earliest known version of it. Others do not believe it’s the origin of the nursery rhyme, but they agree that it’s still a fascinating look at King Olaf’s victory in London.

A different, and somewhat more disturbing theory, was put forward by Lady Gomme in her book The Traditional Games of England, Scotland and Ireland, which was written in the 1890s. Lady Gomme suggested that that the ending of the rhyme, involving the capture of a prisoner and the insistence of setting a watchman, had a more sinister origin. She suggested that this was referring to the practice of ‘foundation sacrifice’ – the belief of sacrificing a human and burying the remains in the foundations. The human sacrifice would then be the ‘watchman’ and would prevent the bridge from collapsing. Although there is no archaeological evidence for this, famous folklorists Iona and Peter Opie, are said to have believed this theory.

Oranges and lemons,
Say the bells of St. Clement’s.

You owe me five farthings,
Say the bells of St. Martin’s.

Another popular London-based nursery rhyme, this one is commonly understood to centre around six churches around the City of London; St Clement’s, St Martin’s, St Sepulchre-without-Newgate (known as Old Bailey in the rhyme), St Leonard’s (in Shoreditch), St Dunstan’s (in Stepney) and St Mary-le-Bow (known as just Bow in the rhyme).

The final lines of the song – involving a ‘chopper’ coming to chop off your head – give some theorists their main clue about the somewhat macabre origins of this particular rhyme.

Prisoners coming into London would be brought in via the docks and taken through the streets towards their public execution. St Clement’s in Eastcheap was located close to the docks, and it’s said the church would ring its bells as each ship arrived to unload its cargo. This would mean that the bells of St Clement’s, ringing to announce the arrival of cargo that may have included fruit from the Mediterranean, would likely be the first bell a newly-arrived prisoner would hear.

The route would then take them past each of the great churches in turn, each one ringing its bells as they passed, until the condemned reached their final moment, somewhere within the sound of the great bell at Bow.

However, this theory runs into problems when an earlier version of the rhyme is examined. Printed around 1744, a version was included in Tommy Thumb’s Pretty Song Book, which had slightly different verses and churches mentioned. Despite these changes, it still appears to be the same rhyme, with one major difference – the final verse doesn’t seem to exist. These lines, which have a different meter from the rest of the rhyme, were first collected in the 1840s. The omission of these lines in the early editions suggest that the listing of the churches as the route of a condemned man may not be accurate.

As I Was Going By Charing Cross

As I was going by Charing Cross,
I saw a black man upon a black horse;
They told me it was King Charles the First –
Oh dear, my heart was ready to burst!

The origins of this nursery rhyme are a little more agreed upon than some others, but they’re no less disturbing.

The ‘black man’ on his black horse is a clear reference to the equestrian statue of King Charles I that stands in Charing Cross. Although the statue is actually tarnished bronze, it appears black in some lights.

Following the end of the English Civil War in 1651, the statue was torn down and sold to a metalsmith to be melted down. However, the smith chose to keep it intact and hid it until the Restoration, which began in 1660, and it was moved to its current location in 1675.

The last line of the rhyme is believed to be the reaction of the crowd when Charles was executed in 1649. He would have walked from St James’ Palace to the Palace of Whitehall where the execution scaffold was set up.

The statue today faces down the length of Whitehall towards Banqueting House, where he was beheaded.

One of the most well-known London-based nursery rhymes may not even have been about London to begin with. Variations exist for different locations, including Scotland’s Burning and Brand in Mokum (Fire in Amsterdam).

The earliest known version of the rhyme was recorded in 1580 and is said to be about the Burning of Edinburgh by King Henry VIII in 1544, in which more than 400 casualties were reported. The lyrics and the melody are slightly different, but are clearly recognisable as the same nursery rhyme.

However, the more familiar London version of the rhyme, has a slightly more recent, albeit less fatal, origin. The Great Fire of London, in 1666, burned its way through the city for five days, destroying the homes of around 80% of the city’s inhabitants. Despite this destruction, there were only six recorded deaths at the time.

Some people argue that the rhyme must be referring to one of the later fires, due to the mention of the engines. However, there were already fire engines in use in London at this time, although they were nothing like the ones we are used to today. Only some of them had wheels, with others being pulled around on sled-like contraptions, and all of them relied on water being piped around the city – which had already failed during the disaster.

There are other nursery rhymes, some with origins just as unusual as these, which centre around the City of London.

Pop Goes the Weasel was – at one time – a popular piece of dance music, until the seemingly nonsense lyrics were added. After this, it became more widely associated as a children’s rhyme. There are a number of theories surrounding the lyrics, especially the first line, including that the weasel in question is referring to either a tailor’s flat iron, a hatter’s tool, a spinner’s weasel used for measuring, a piece of silver plate, or an actual dead weasel. Of course, ‘weasel and stoat’ is Cockney rhyming slang for ‘throat’, so it could mean something entirely different.

Pussy Cat, Pussy Cat has a much lighter origin than some of the other London rhymes. It’s believed that it tells the story of an old tomcat that roamed the corridors of Windsor Castle, although no one seemed to know where the cat came from. One day the cat decided to settle down under Queen Elizabeth I’s throne and stayed there all the way through her royal audience. When it suddenly awoke, it nearly frightened the queen to death. The cat was caught by a courtier and brought to the queen for punishment. However, instead of punishing the cat, she decreed that its life would be spared, and it returned to chasing away the mice and rats in the castle.

Ring-a-Ring o’ Roses is traditionally believed to be about the Great Plague of London, but folklorists and historians largely agree that this isn’t the case. There are a number of aspects of the rhyme that make no sense when compared to the actual symptoms of the plague – no ring of roses appeared on the bodies, there is no evidence of posies or any other flower being used as treatment, and sneezing wasn’t a symptom. There are also questions around the date of the nursery rhyme. The earliest recorded printing of the rhyme was in 1881, and the plague occurred in 1665. It seems unlikely that no one ever thought to write the lyrics down in 200 years. In fact, no one had ever considered the link between the plague and the rhyme until author James Leasor proposed the idea in his non-fiction book The Plague and the Fire, which was published in 1961.

Turn Again, Whittington is a rhyme that tells the familiar story of Dick Whittington – most popularly referenced now as a pantomime. What is less commonly known is that Richard Whittington was a real person, and not just a fictional character. He really was a poor boy who travelled to London to seek his fortune, accompanied by his cat, and eventually became the Lord Mayor of London. The only aspect of this story that can’t be evidenced is the existence of the cat itself!

Growing up, I always found stories of my home city to be the ones that interested me most. However, I didn’t know the truth behind the fiction until I started my research, and I discovered the layers of history that went into these beloved children’s nursery rhymes. While I’m still fascinated by them today, I think I can honestly say that I’m glad I didn’t know their origins when I was a child!