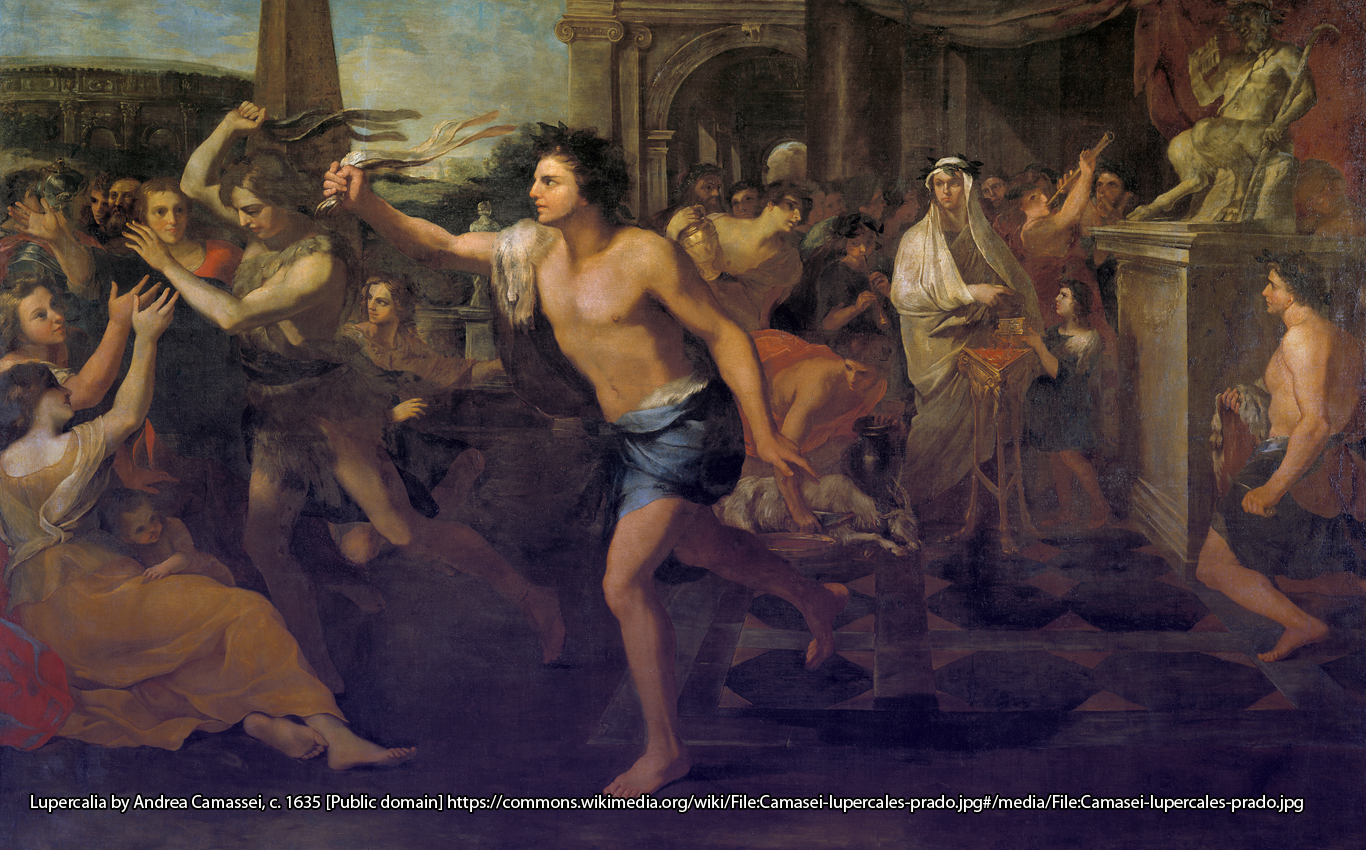 Trying to divine the origins of Valentine’s Day proves challenging. Some believe the day is named for St Valentine, a priest who conducted marriage ceremonies in secret. Officials executed him once his clandestine weddings were discovered. His name became synonymous with love and romance. Or did it?

Others think it derives from the Roman fertility festival of Lupercalia, held between February 13th and 15th. Pope Gelasius changed the festival’s name in 496 CE, claiming St Valentine died refusing to recant his Christianity. If true, the change removed the pagan roots of the festival and turned it into a Christian celebration of love.

But folklore is never that simple, is it? Even the sweetest celebrations have a darker aspect. Come with me and explore the sinister side of Valentine’s folklore…

This isn’t Valentine’s folklore but it relates to Lupercalia. Plutarch wrote about a particular practice that involved young men running naked through the streets. They’d carry bits of animal skin and tried to whip the women they encountered. Women actively went looking for these young men. Apparently, being whipped with skin from sacrificed animals ensured fertility and easy childbirth.

Elsewhere in the festivities, men and women put their names into an urn. They took it in turns to draw out a name, and that person became their partner for the rest of the festival. I suppose it beats Tinder, but it shows the Roman emphasis on sexuality over what became ‘courtly love’ in the Middle Ages.

There was a particularly odd — and potentially sinister — slice of Valentine’s folklore in Britain. People believed women would fall head over heels for the first person they saw on Valentine’s Day. Some women apparently manufactured encounters with men who’d caught their eye early in the day. Samuel Pepys even recorded in his diary in 1662 that his wife kept her hand over her eyes while she moved around their house. She wanted to avoid seeing the workmen doing renovation work.

You can imagine that this belief might be rife with skulduggery and manipulation.

Lots of websites discuss the choice of February 14 for Valentine’s Day. It derives from an apparent medieval folk belief that birds chose their mates for the year on that date. People might give their partners a quail egg to signify romance, because they were supposed to enhance beauty and fertility.

Sadly, it’s not necessarily true. This belief may come from a line in a Chaucer’s poem, Parlement of Foules (c. 1382). Over time, the quote ‘stuck’ as a folk belief. Jim Moon notes there’s no written evidence for the belief in a specific day for birds to mate (2015). As he points out, the society of Chaucer’s era were agrarian and therefore closer to wildlife behaviour and habits. The unpredictability of spring’s arrival makes it unlikely a specific day would herald mating among birds. Instead, this ‘marriage of the birds’ became symbolic rather than literal.

Though birds also play a huge part in another weird Valentine’s belief. The first bird a single woman saw on Valentine’s Day could predict her future husband’s character. This form of divination is known as ornithomancy. Ideally, you’d want to see a canary (you’d marry a doctor) or a goldfinch (a rich man). Doves mean you’ll have a happy marriage. Avoid woodpeckers, which mean you’ll stay unmarried.

Much Valentine folklore relates to finding a partner or seeing a vision of your intended. While it sounds closer to a Halloween superstition than one for Valentine’s Day, one dark tradition involved graveyards. Head to a cemetery the night before Valentine’s Day. At midnight, run around the church twelve times. If you do it properly, your future lover would appear as a ghost. Other people believed you’d see omens that, interpreted correctly, would reveal your intended.

Head to a cemetery the night before Valentine’s Day. At midnight, run around the church twelve times. If you do it properly, your future lover would appear as a ghost.

Lisa Graves and Tricia Cohen note that women turned to food to help with Valentine’s issues. They might throw marigolds into the path of their love. They might pin bay leaves to a pillow, or place a slice of wedding cake beneath, to encourage prophetic dreams.

Or they’d mash up leeks and earthworms and eat the mixture to help strengthen a failing relationship (2016).

According to Hazel Andrews and Teresa Leopold, people held banquets to celebrate love. I can only hope they weren’t eating earthworm mash at the time. Guests wore infinity signs and other love symbols on their clothes. They were supposed to talk about love over “dishes that were known to ‘stimulate affection'” (2013). This all sounds very lovely and you might wonder what it’s doing in a post about sinister Valentine folklore. Bear in mind that these banquets were lit by what Tom Hodgkinson describes as “love lanterns”. These were often “large hollowed-out turnips” similar to jack-o-lanterns (2011). Spooky stuff.

Not all Valentines were sweetness and light. The anti-Valentine appeared in the 1840s, often called a ‘vinegar Valentine’. They were supposed to be used by people to give unwanted suitors the ‘heave ho’.

But some early trolls used them in a more bullying fashion, sending them to people they just didn’t like. Comic Valentines actually accounted for half of all American Valentine card sales during the mid-19th century. They fit into a wider pattern of anonymous cards that allowed people to tell someone what they thought, from salespeople to employers.

While some might debate whether they should be considered ‘folklore’, the sending of them does derive from culturally acceptable traditions like sending cards. The practice fell out of favour by the end of the 19th century but with the rise of anti-Valentine cards, might we see a 21st century revival?

Next time you walk into a stationer’s shop and you’re bombarded with a dazzling array of Valentine’s cards, just remember this post. Could you better express your love with earthworm mash, or by whipping your partner with animal skins? If you’re single, should you take up birdwatching for clues as to your future husband?

Whatever you do, just remember to show you love someone in the way that best suits you. And start thinking of brand new superstitions involving glitter-encrusted cards and chocolates.

Hodgkinson, Tom (2011), Brave Old World: A Month-by-Month Guide to Husbandry, Or the Fine Art of Looking After Yourself, London: Penguin.