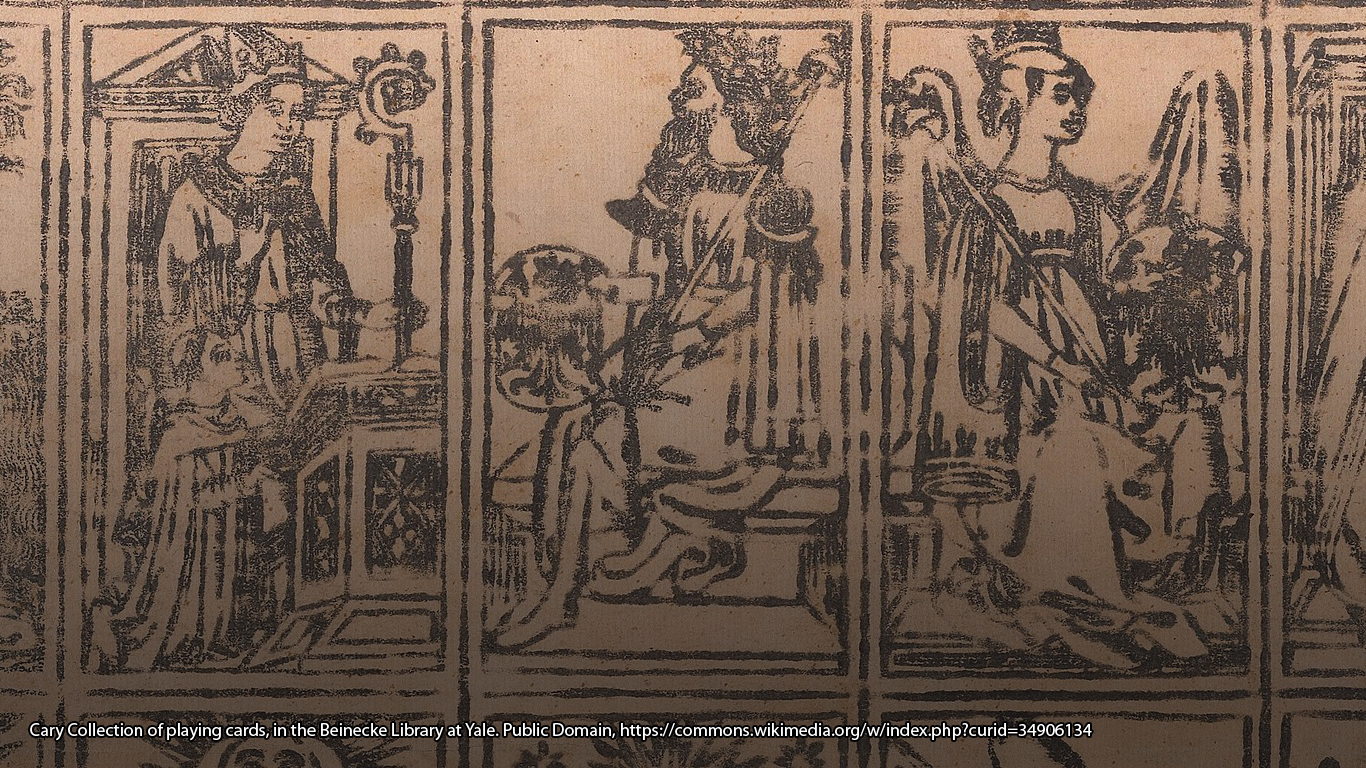 When you think of tarot cards, do you picture a fortune teller predicting your untimely end in a darkened room? Do you think they’re evil? Thankfully, as you’ll soon discover, the former is unlikely and the latter is simply wrong. Let’s investigate the history and folklore of this much-maligned form of divination.

One of the biggest problems with tarot is the number of myths about its origins. There are claims that playing cards originated from tarot cards, but there is little evidence to support this assumption. Playing cards are largely believed to have reached Europe in c. 1370, where artists updated the Arabic designs. Documentary evidence supports this belief and Paul Hudson notes the existence of bans on playing cards in Europe in the 1370s (2004).

Yet there is evidence that tarot cards were themselves a form of playing card, used for the game of trionfi (triumph). Much like regular playing cards, these trionfi decks contained four suits and court cards (a page, knight, queen, and king). These suits are now known as the Minor Arcana, and usually take the form of Pentacles/Coins, Wands/Batons, Cups/Chalices, and Swords.

The crucial difference between ordinary playing cards and tarot cards are the 22 picture cards, now known as the Major Arcana. They begin with The Fool, which at card 0 is sometimes called the unnumbered card. The Major Arcana follows an arc through to the final card, The World (card 22).

Liz Dean explains that tarot cards may have started life in 1392, after Charles VI of France commissioned a painter to create packs of decorated cards (2019).

Others place their creation in northern Italy (usually Milan or Ferrara) in the 15th century. The famous Visconti-Sforza deck dates to c. 1441. People used these trionfi decks to play triumph, a card game with similarities to bridge. During the early 1500s, the word trionfi disappears and the cards get their new name – tarocchi. The game travelled to other parts of Europe, and in 1736, Chosson of Marseille created a new deck, a prototype for the later Tarot de Marseilles decks.

It took occultists until the 1780s to discover tarot cards, and the use of tarot for divination is often attributed to Antoine Court de Gébelin. It’s at this point that the links between tarot and ancient Egypt seem to arise. Jean-Baptiste Alliette published the first how-to manual for tarot, called How to Entertain oneself with a Pack of Cards called Tarot. This book continued the story linking the cards with ancient Egypt despite the total lack of evidence. Six years later, he released the first deck that linked the tarot with Hermetic teachings.

For occultists, the pictures on the trump cards took on greater symbolism than images for use in a game. In many ways, the jump from game to divination tool reflects the move of the Ouija board from Victorian parlour game to favourite device of the horror writer.

Despite the lack of evidence to support the claim, some writers still believe tarot cards date back to ancient Egypt. Others think they’re what’s left of the only book to survive the burning of the library of Alexandria.

While researching this article, I also found that people think 13th-century alchemists created tarot cards to preserve their knowledge. One theory even connects them to the Knights Templar.

Yet the truth is far more prosaic. In the mid-19th century, occult writer Elphias Levi started drawing associations between these former playing cards and other esoteric systems. He drew parallels between tarot and kabbalah, astrology, and planetary correspondences, drawing tarot into a newly formed magical tradition.

Notorious occultist Aleister Crowley created his own deck in 1944, adding to the mystery. Not bad for a game that started out in Renaissance Italy.

In the early 20th century, British occultist Arthur Edward Waite disagreed with these supposed links between the tarot cards and ancient systems. But he couldn’t deny the images held a lot of potential.

Waite teamed up with artist Pamela Colman Smith to create the Rider-Waite-Smith deck. This was the first deck to be used solely for divination, and the Minor Arcana finally carried images to allow readers to perceive messages. As an example, the Eight of Pentacles is often taken to mean working consistently to master your craft (whatever that craft might be).

In the famous Marseilles deck, the Eight of Pentacles would literally feature eight pentacles or coins and nothing else. Here, the Minor Arcana more closely resembles traditional playing cards. Many people find it  difficult to draw intuitive messages from this type of card. But the Rider-Waite-Smith deck allows for the interpretation of an image to receive the message.

This use of images to stimulate intuition is where the tarot cards now sit. While specific images vary across decks, symbolism can be common due to the use of archetypes. These archetypes appear in the work of psychologist Carl Jung, and we know them as ‘The Magician’, ‘The Hero’, or ‘The Sage’. According to Jung, we recognise archetypes from a young age because they allow us to understand the world.

This psychological aspect of tarot is largely where the practice now sits. Brigit Esselmont, founder of the online tarot community Biddy Tarot, describes tarot as “perfect for self-development, making choices, manifesting goals, coaching others, planning a business, writing a book, meditating — you name it” (2018). Think of them as a 21st century agony aunt.

The Cards and Folklore

Naturally, a degree of folklore has gathered around the cards. People who are unfamiliar with their meanings may gasp in horror to see cards like Death or The Hanged Man. Let me assure you that no, the Death card does not mean you will literally die. Instead, it often represents a figurative death or ending. For example, you might decide to give up smoking, change jobs, or give up a hobby you no longer enjoy.

Many of the tarot superstitions can be dispelled. Some people say tarot cards can’t lie— while some say they also can’t predict the future. Others believe you should never buy tarot cards for yourself and should only be gifted a deck. Elsewhere, others think you should never let others do readings with your cards. A linked superstition says a tarot reader shouldn’t let others even touch their cards, but having the querent shuffle the cards is an intrinsic part of a reading, so I’ll leave you to figure that one out.

Whether you use them for guidance around big life issues or you put them in the same New Age bucket as crystals and incense, one thing is clear. Tarot cards are far from the “Devil’s picture book” that people might have you believe they are. At best, the tarot lets readers tap into the collective unconscious for valuable insights and advice from the universe. At worst, they’re psychological prompts to help you see problems from different perspectives.