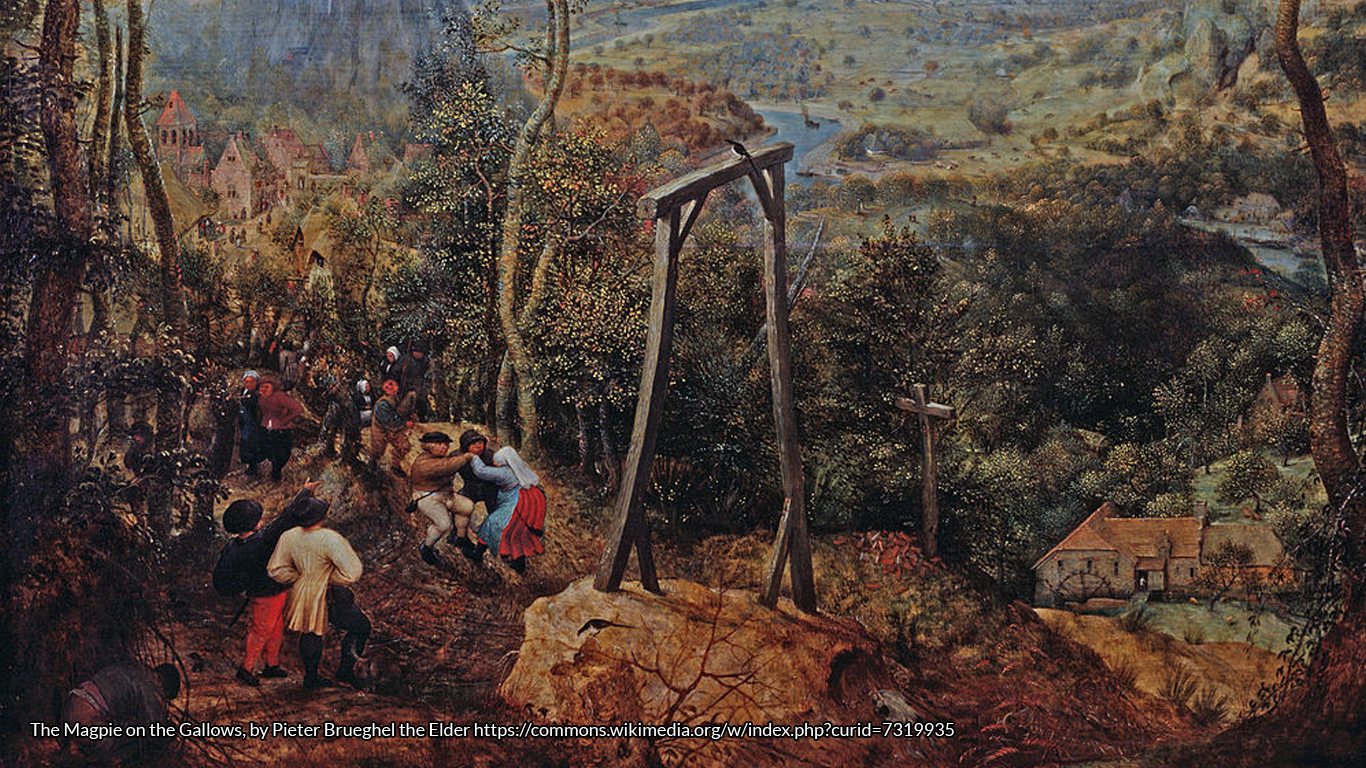 The gallows are perhaps more associated with the creepy opening shots of horror films. A body dangles from the scaffold while a hunched figure scurries around its base, wreathed in shadows and ground mist. But is there more to the gallows? Does their appearance mark them as simple set dressing, or are they the site of their own folklore? Let’s delve into the mysteries of the gallows…

The gallows loom large in the history of crime and punishment, particularly in England. They give us a range of common phrases, such as ‘gallows humour’, while both ‘pulling one’s leg’ and ‘falling off the wagon’ come from the scaffold. The former refers to a particularly tortuous experience before the so-called ‘long drop’ method of hanging was introduced in 1872. This more ‘humane’ method killed its victims by dislocating their neck, causing death more quickly. But the old ‘short drop’ method slowly strangled its victims. Friends and family would crowd around the scaffold, pulling the legs of their loved one to hasten their demise. The latter refers to the long journey from Newgate Prison in London (the site is now occupied by the Old Bailey) to the gallows at Tyburn (also known as Tyburn Tree). The wagon paused outside a pub in the vicinity of Tottenham Court Road to allow the condemned prisoner one final drink. They ‘got back on the wagon’ and went off to die having presumably never drank again.

A source of body parts

So the gallows already gives us phrases we use on a regular basis – neither of which immediately conjure up images of hanging. Perhaps its association with horror stories comes from two other nefarious practices; body-snatching and the Hand of Glory. After all, the hand of a hanged man was the main ingredient to the burglar’s favourite infiltration device. Yet it wasn’t just body-snatchers or magicians seeking the body parts of hanged men. The hand of an executed man was believed to be a medicinal cure for a whole range of ailments. Sufferers attended public executions, paying the hangman for access to the corpse. According to the folk remedy, rubbing the dead man’s hand across a swelling would ease the condition. V. A. C. Gatrell notes that “a dozen people stroked themselves with a hanged man’s hands to cure themselves of wens” at the Newgate gallows in 1786. A woman even bared her breasts at Meister in 1799, so convinced was she in the curative properties of a hanged man’s hands.

That leads us nicely onto the beliefs surrounding the curative properties of the physical materials of the gallows. The wood was particularly prized as a cure for both ague and toothache. A piece of the wood should be worn or carried to defend against ague, while splinters in the mouth apparently cured toothache (presumably by causing more pain themselves). Even the rope made its way into the hands of souvenir hunters. Tied around the head, the hangman’s rope could cure headaches. It also acted as a good luck charm, particularly for those who played cards.

Interpreting dreams was a favourite pastime in the late eighteenth and early nineteenth centuries. Given the popularity of public executions, gallows naturally made their way into the dream-books that apparently decoded the night-time flights of fancy for interested readers. While dreaming of the gallows might ostensibly appear to be an omen of death, contemporary readers saw it as “an omen of riches and honours to come” (Gatrell). Elsewhere, Gatrell tells the story of a man about to be hanged on Kennington Common in 1763. A terrific storm blew in and so frightened the crowds that the sheriff called in military force to control the situation. On the surface, the events appear somewhat out of proportion, but a broadside later told a similar story of a condemned man. This chap had prayed for a fine day’s weather if he was guilty, and for darkness to overtake the town if he was innocent. According to the tale, an horrendous storm rolled in at the time of his hanging, prompting the real murderer to confess. While it’s unlikely that divine intervention really did play a part in the hangings, and it’s likely the later story was entirely fiction, it demonstrates the peculiar reverence people showed towards the gallows.

The gallows and the dead

In A Dictionary of English Folklore (2000), Jacqueline Simpson and Stephen Roud note an association between black dogs and the gallows. These solitary canine spectres may patrol the area around rural scaffolds as part of their territory. In addition, decapitated corpses from the Roman and Saxon eras have been discovered at a range of sites around the country. Some of them are found in cemeteries, although others are believed to be criminals, buried at their execution sites. The practice even continued well into the eleventh century in Suffolk, where the gallows became the burial site for those executed on the spot. The decapitation of the bodies is largely understood to be the means of preventing them from returning as revenants.

You probably won’t be surprised to learn that the notorious mandrake plant was believed to grow at the foot of the gallows. In the seventeenth century, people believed mandrakes grew out of the urine or fat that dripped from the corpse. Perhaps this assumption came from the human-shaped root of the plant. It certainly helps to solidify the otherworldly reputation of the gallows.

We sometimes struggle to understand the barbaric tendencies of our ancestors. While the practice of hanging ended in 1964 in the United Kingdom, the days of public executions are long gone. Yet the gallows remain, haunting the edges of popular culture, a silent yet ominous symbol for death. Modern medicine has replaced the superstitious cures involving hanged men. Witches no longer harvest mandrakes from beneath the scaffold. But the manmade tree and its rope noose loom large at the edge of English folklore, casting a long shadow at twilight…

Sugg, R. (2011) Mummies, Cannibals, and Vampires: The History of Corpse Medicine from the Renaissance to the Victorians, Routledge Press