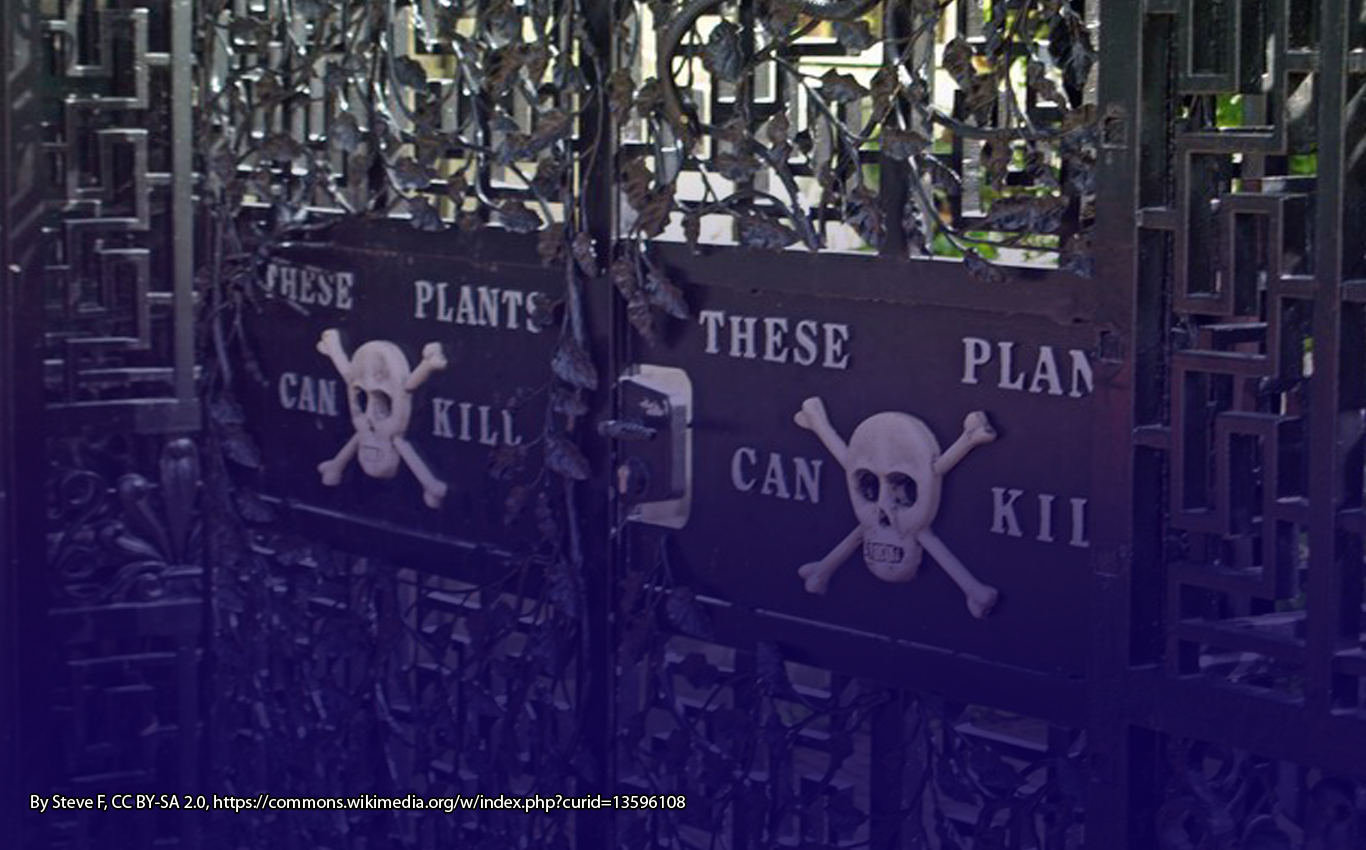 There’s something about the concept of a poison garden that either titillates or terrifies, depending on your preferences.

The UK’s most famous poison garden is at the Alnwick Garden. Its influence is so far-reaching that if you Google “poison garden”, it dominates the first several pages of results. So much so that I assumed the poison garden was an established concept in horticultural history. Not so, it turns out.

Yet it does descend from a historical gardening ideal — the physic garden.

You and I are going on a voyage of discovery in these gardens. Just be careful not to touch anything…

Let Us Enter the Apothecary Garden

Herbalism as a discipline is probably as old as humanity. We still commonly use some of the practices today. Hands up if you’ve had lemon and ginger tea for a cold, or peppermint tea for indigestion?

These herbal approaches to medicine come to us from the medicinal or apothecary gardens, often found within the walls of monasteries across Europe. One such garden, on the site of the largest medieval hospital in Scotland, provided an inspiration for Alnwick’s Poison Garden. The larger infirmaries had their own apothecary gardens, manned by the monks before the Dissolution of the Monasteries.

Some of the plants grown in these gardens carry a clue about their helpful past in their botanical name — officinalis. English Heritage explains the monks stored their medicines and herbs in an officina, or storeroom.

Another of the Alnwick inspirations was the Botanical Garden of Padua. Founded by the Venetian Republic in 1545, its original function was to both grow medicinal plants and allow students to learn to identify plants. Students would find poisonous plants among the medicinal collection since many of these plants can also be used for therapeutic purposes. Nowadays, the garden boasts a specific poison collection.

The Chelsea Physic Garden is another good example of these medicinal gardens. Founded by the Worshipful Society of Apothecaries in 1673, it’s London’s oldest botanic garden. The site previously housed a market garden, but now contains around 5,000 different species that are medicinal, useful, or edible.

Sue Minter explains that the Chelsea Physic Garden also helped to legitimise the apothecaries as “a reputable medical body” during the seventeenth century, a period in which they faced stiff competition from the physicians. This is vital to the development of medicine as a practice.

Beware What You Touch…

Make no mistake that these apothecary gardens are filled only with safe or pleasant healing plants. At the Chelsea Physic Garden, you’ll also find their poisonous cousins lurking within this gorgeous green oasis. Deadly nightshade, larkspur, monkshood, and mandrake rub shoulders with periwinkles, campanula, and peonies.

Therein lies the point of the apothecary garden. It became the best way for trainees to learn the difference between the plants. As Minter points out,

“Apothecaries needed to be able to identify the herbs they would be purchasing to compound their products and thus avoid adulteration, poisonings or ineffective treatment”.

Thanks to this ‘hands-on’ approach to learning, they didn’t create remedies that ended up being poisons.

Unless, of course, they wanted to. The image above is common monkshood (Aconitum napellus), also known as aconite, wolfsbane, Devil’s helmet and blue rocket. According to myth, it sprang up from the drool of Cerberus, guard dog of the underworld. The ancients used it to poison each other’s water supplies in times of war.

Yet Marija Povšnar’s research in Slovenia in 2017 showed a therapeutic use of Aconitum in folk medicine. An extract of the plant was used to treat gout, neuralgia, rheumatism and toothache. I can’t stress enough how much you shouldn’t mess about with these plants. A Google search is not the equivalent of a medical or pharmaceutical degree. If you’re ill, see your doctor.

These early gardens were intended as a training ground for apothecaries and other botanical students. An educational thrust lies behind Alnwick’s Poison Garden, although it does come with a side helping of “marketing”. The Poison Garden is a pet project of the Duchess of Northumberland, tucked into a locked section of the Alnwick Garden. The original garden was designed by Capability Brown in 1750 but fell into disrepair. After bringing the Alnwick Garden back to life, the Duchess decided to add the Poison Garden. Visitors can only get inside on a guided tour, so fearsome are some of the plants on show.

The Poison Garden opened in 2004 and now provides education around particularly toxic substances. You’d certainly recognise some of the specimens, which include tobacco, rhubarb, laurel, and box. These latter two plants are common in garden hedges, though box also played a role in funerals in Northern England. When someone died, the family left a bowl full of sprigs from the shrub by the deceased’s door. Mourners would take a sprig to later throw into the grave.

I daresay some readers would also recognise cannabis. The Duchess also has a license to grow opium poppies and the coca plant, which gives us cocaine, helping reinforce the educational nature of the garden. It’s hard to believe that the Incas considered the leaves of the coca plant were a gift from the gods. Royal messengers took the leaves on long journeys to help them through their arduous travels. It’s strange to think this once sacred plant ended up in the original formulation of Coca-Cola, only being removed in 1904.

These illegal plants, considered the most dangerous or sought-after, grow inside cages. Yet it’s easy to see you can find equally dangerous plants in your own garden at home…

I think this is perhaps the key to the poison garden’s success. While it is rare that you would ever see some of these plants up close, some of them are common sights in English towns and cities. Take lily of the valley, foxgloves, laburnum, and yew. Ancient peoples saw lily of the valley as a bad omen: anyone who planted a bed of the flowers would die within a year. Meanwhile, the fine roots of the yew tree would grow through the eyes of the dead, preventing them seeing their way back to the living.

Still, treat these plants with respect and you shouldn’t go far wrong.

The Influence of the Poison Garden

As well as its sheer dominance of the Google results, the poison garden’s influence even reaches into fiction. The Turn of the Key by Ruth Ware features an overgrown and forgotten poison garden on the estate of a large Scottish house. At its centre stands a statue of Achlys, the obscure Greek goddess of misery and sadness (and sometimes poison).

The ancient Greeks were no stranger to poison. One of their state-sanctioned methods of execution involved their “State Poison”, a fated meted out to Socrates in 399 CE. This poison was later determined to be poison hemlock. Joel Levy notes that poison hemlock is the most common type of the plant, and it is related to parsley and fennel. Poison hemlock causes paralysis throughout the body until it reaches the respiratory system and the victim dies.

Such poisonings aren’t restricted to the ancient Greek state. Our final ‘star’ of the poison garden is the castor plant, the source of ricin.

In 1978, Bulgarian dissident Georgi Markov died of ricin poisoning after being targeted on Waterloo Bridge in London. His assassin delivered the ricin in a tiny wax-covered pellet, injected into Markov’s leg using an umbrella. Ricin comes from the seeds, which also give us castor oil, traditionally used as a purgative. It seems only fitting that we’d end our trip to the apothecary and poison gardens with a plant that would be at home in both of them.

Whether you regard plants as something pretty for your garden, or the untapped source of medicinal riches, one thing becomes clear. Plants have a great capacity to heal and help us — but they can also do great harm. As we saw with ricin, the same plant can even do both.

So take care of the plants in your garden. Learn about their properties and what they need to thrive. Finally, be absolutely 100% positive that you’ve got the right plant before you try to use it as anything other than a precious garden ornament…

Minter, Sue (2013), The Apothecaries’ Garden: A History of the Chelsea Physic Garden, Stroud: The History Press.