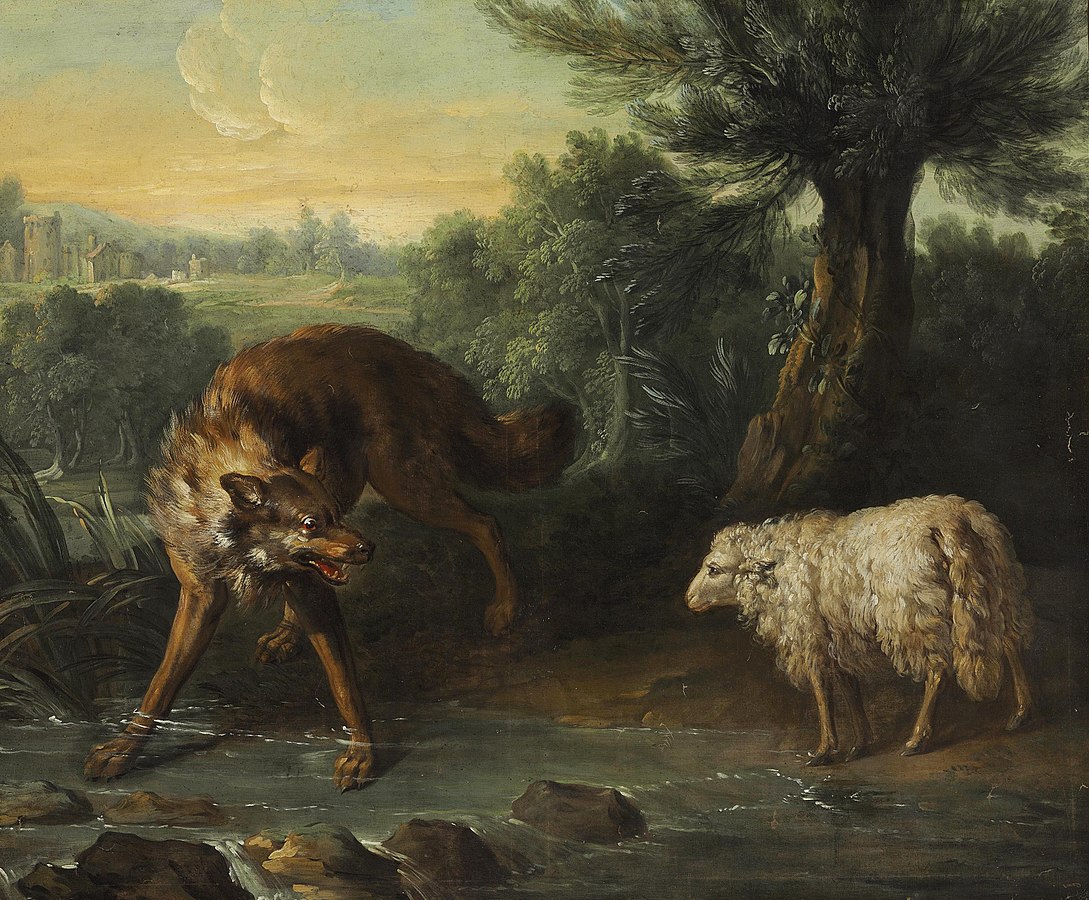 Attributed to Aesop (620 – 564 BCE), the fable of The Wolf and the Lamb was written to remind us to be wary of a tyrant, as they will always find a pretext for their tyranny. They may try to justify their behaviour, even try and convince you that their actions are in the best interest, but ultimately, they are self-serving narcissists that believe their own rhetoric.

The Wolf and the Lamb
One day a wolf came across a lost little lamb who had been separated from its flock. Upon seeing the lamb, the wolf felt his hunger rising, and so he tried to justify his desire to kill the lamb.
‘I believe you were the sheep that gravely insulted me last year’ the wolf said to the lamb.
‘That cannot be’ replied the lamb ‘for I was not even born back then’.
‘Well’ said the wolf ‘You feed in my pasture and eat all my grass’.
‘No, sir’ bleated the lamb ‘I have not yet even tasted grass’.
‘But you drink from my well’ cried the wolf.
‘I do not’ refuted the lamb. ‘My mother’s milk is all I need for both food and drink’.
Upon hearing this the wolf grabbed the little lamb and ate him anyway, exclaiming ‘Well, I won’t remain hungry, even if you refute every one of my accusations’ [1].

The word tyrant originates from the Greek tyrannos, and was initially used to describe the new breed of leaders that were seizing power from the established aristocratic rulers [2]. Originally the word was not pejorative; it was a neutral term used to describe a usurper who had seized complete control through unconventional means. Generally, two things were required for tyrannical rule to take place: first and foremost, the new ruler had to be exceedingly wealthy. They required money to hire mercenaries (those who will fight any battle for their own personal gain) to allow them to overthrow the current rulers, and ongoing funds to retain the mercenaries’ ‘loyalty’ so they did not defect to the next person offering them pay. The second thing required was the support of the local peasants, which was often initially obtained as the tyrant seemingly offered an alternative system. By promising them a better way, those disillusioned with the current system would opt for the unknown tyrant instead. The monarchs, however, were bound by constitutions and laws to protect those they ruled, while the tyrants had free reign and quickly demonstrated their driving force was power for personal gain [3].

As self-serving and oppressive regimes began to transpire as the norm for tyrannical rulers, the word began to have the negative connotations it inspires today. It also widened to incorporate not only the usurpers, but to also include a legitimate sovereign who abuses his power in order to violate the law, to oppress his people, and to make his subjects the victims of his passions and unjust desires, which he substitutes for laws [4].

In fairy tales we learn the difference between a kingdom that is governed by its rightful ruler, and those that have been thrust into darkness by an illegitimate usurper of power. Sometimes these are female figures such as the evil stepmother in Snow White. Here we have a woman who has seduced and beguiled the king with her insincere charm, and then established power that has overshadowed his rule. We see a woman gripped by narcissism and a need to consolidate complete power, and the lengths she will reach to secure it; intrigue, treachery, treason, and finally murder. While the fairy tales always end happily, we glimpse the true evil that lurks in the tyrant’s soul, and a warning of the darkness that will spread across the land in their rule.

Again in folklore, we see ballads and stories that provide us a hero to defeat the tyrant. Robin Hood is probably the best-known example. The hero of the people robs from the rich, and gives to the poor, and at the same time constantly undermines and thwarts the over-reaching grabs for power by the elite. Joseph Ritson’s Robin Hood, written in 1795, is a collection of poems, songs and ballads, which also contains copious notes on Robin’s life. In these it describes his long-standing fight against the tyrannical rule of the English King:

In those forests, and with this company, he for many years reigned like an independent sovereign; at perpetual war, indeed, with the King of England, and all his subjects, with an exception, however, of the poor and needy, and such as were ‘desolate and oppressed’, or stood in need of his protection [5].

So, why is the tyrant a re-occurring theme in various forms of folklore? There are two important functions to identify. First, folklore is used as a form of education; it can tell us what is right and wrong, and the societal expectations of a role. By telling these stories, and identifying tyranny with evil, people can not only express the desirable traits of their rulers, but also learn what is required by a leader, and re-enact that on smaller stages. Folklore also acts as a release valve, or:

a widespread means of expressing discontent, implicitly or explicitly, and so releasing those frustrations and aggressions that are generally deemed to be unsuitable for expression in any other form or context [6].

Under the rule of a tyrant, jokes, stories, and songs can allow us to safely vent our discontent in an informal form which is less likely to have repercussions, while the use of allegorical references, and the idealisation of folk heroes from the past, can also provide hope and comfort in a time of oppression. The good news is, if you suspect there may be a tyrant among you, consider what Thales of Miletus quipped when asked about the strangest thing he had ever seen. He replied with “An aged tyrant” [7]. His meaning was that a tyrant never survives long; their self-serving disregard for those around them, and their inability to lead well, becomes very quickly apparent and results in dissention.

In Book IX of The Republic Plato details the lifecycle of a tyrant, and it is not pretty. Plato declares that, driven by his own insatiable desires, the life of a tyrant as the most miserable:

He who is the real tyrant, whatever men may think, is the real slave, and is obliged to practice the greatest adulation and servility, and to be the flatterer of the vilest of mankind. He has desires which he is utterly unable to satisfy, and has more wants than any one, and is truly poor, if you know how to inspect the whole soul of him: all his life long he is beset with fear and is full of convulsions, and distractions [8] and it never gets better.

The tyrant’s constant intrigue and lies, and lack of true loyalty, means his position is always in jeopardy, and yet his weak character means he does not have the skillset to cope:

He has to be master of others when he is not master of himself: he is like a diseased or paralytic man who is compelled to pass his life, not in retirement, but fighting and combating with other men [9].

Or to put it in a more modern context, as Dumbledore tells Harry Potter:

Voldemort himself created his worst enemy, just as tyrants everywhere do! Have you any idea how much tyrants fear the people they oppress? All of them realise that, one day, amongst their many victims, there is sure to be one who rises against them and strikes back! [10]

Tyrants will always be drawn to powerful positions, and as Aesop warned us, will always find a pretext for their tyranny. Folklore is one of the modes of resistance readily available to us, and there is a reason it always flourishes in times of social unrest and oppression.