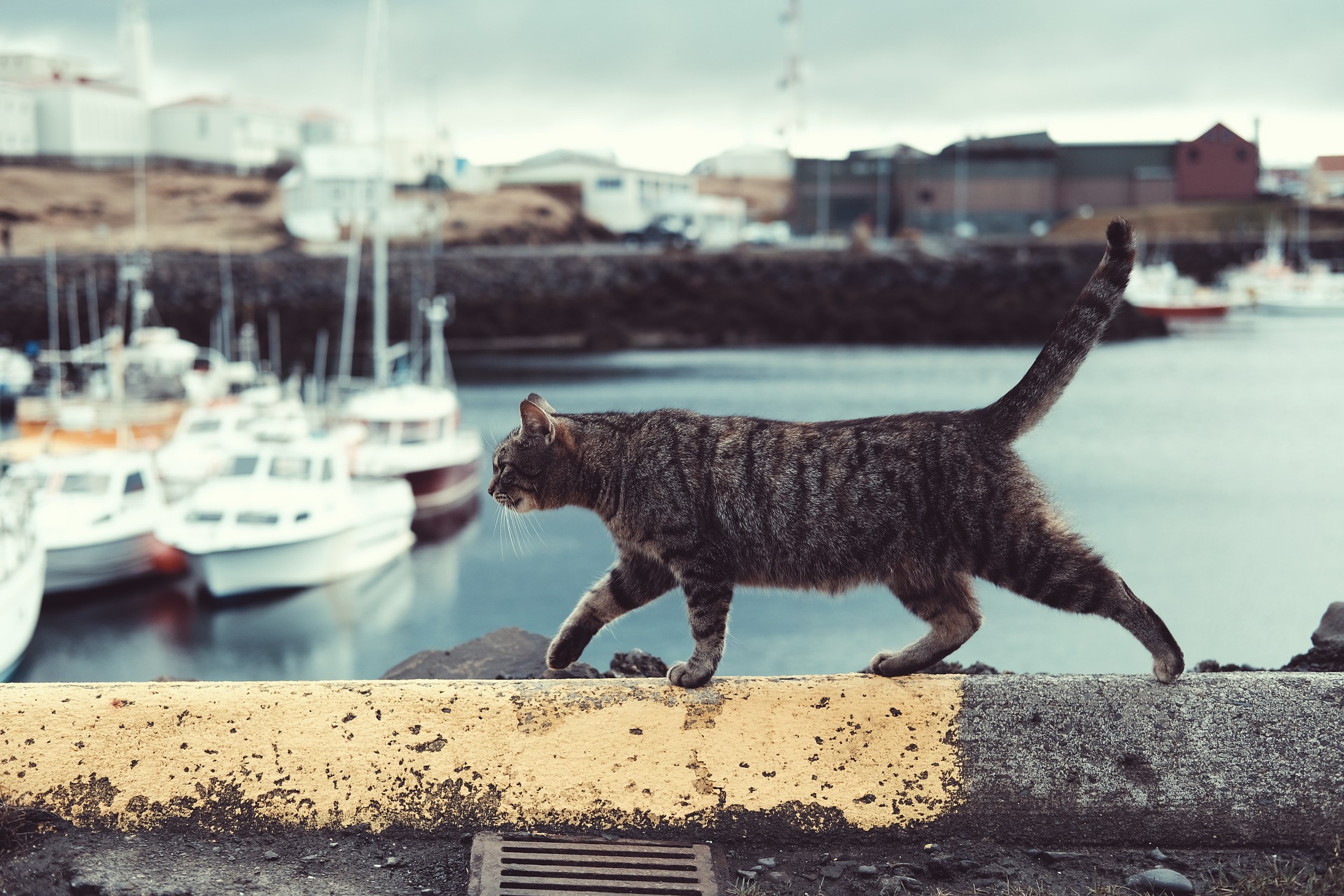 Ship’s cats have been sailing the seven seas alongside humans for centuries. They were not usually taken along as pets or tourists, but performed an essential role controlling vermin. Rodents managed to find their way on to most types of ships and cats being a natural enemy were taken along to reduce their number.

Rats and mice could cause all sorts of problems for sailors. Ships carried many different types of cargo and the profits of the ship owners and crew depended on keeping that cargo as safe as possible. Rodents would eat and contaminate anything edible such as grain or food and ships also carried sufficient provisions and stores for the crew which needed protection. Rodents also gnaw and chew inedible items such as rope or woodwork causing problems with the working of the ship. In modern ships, electric cables or hoses were also vulnerable to rodent attack, often leading to fires or breakdowns. Rodents carried disease, and in the small enclosed community of a ship infections could spread rapidly. Cats, being natural predators, made a good choice for rodent control onboard while offering companionship to the sailors.

Cats are believed to have lived alongside humans for thousands of years before becoming domesticated, about 9,000 years ago. However, cat owners will tell you that it was cats that domesticated humans! One theory says they were attracted to the mice and rats that were drawn to the cereals early farmers were growing and harvesting, and in this way a relationship of mutual benefit between cats and humans developed.

In ancient Egypt cats were taken onboard boats on the River Nile to hunt birds in the thickets that grew along the banks. Evidence from DNA implies that cats spread from ancient Egypt by maritime traders on ships along sea routes. Their ability to catch rodents was believed to be the the major factor in their spread. Many trading vessels carried at least one cat, transporting them from port to port advancing their range. Vikings ships also carried them on their journeys as pest control, and the Norwegian forest cat was thought to have been used for this purpose. The 15th to 18th centuries saw the growth of shipping taking the domestic cat around the world.

In their voyages many myths and legends evolved around cats. One type of feline highly sought after for rodent control on ships were polydactyl cats. Cats usually have five toes on each forepaw and four toes on both hind paws making eighteen. Polydactyl cats have extra toes on either front or rear hind paws, and sometimes all four.

Polydactylism is an inherited abnormality which is more common in felines in the South West of England, Wales and Kingston-upon-Hull in the UK and along the coast of New England and Canada. It is uncertain whether they originated in New England or the UK but the consensus is that they were spread from ships leaving Boston, Massachusetts. Having extra toes was believed to give them extra stability and agility. These supposedly enhanced attributes helped them catch rodents, making them sought after as ship’s cats.

Many sailors believed cats had power to protect ships from bad weather. It was also believed if a cat approached a sailor on deck that was good luck, but if they only approached halfway and then turned back that was unlucky. If a cat was seen to lick its fur against the grain a hail storm was imminent, and if it licked its fur with the grain then rain could be expected. A lively, frisky cat heralded wind.

During the Second World War cats were quite common on board ships. The rise of the mass media and improved telecommunications led to many ship’s cats achieving stardom and celebrity status. On warships they served an important function controlling rodents while boosting crew moral.

The RMS Empress of Ireland had a ship’s cat named Emmy.  She was an orange tabby who was said to have never missed a voyage except one, a very crucial one.  On the 28th of May, 1914, Emmy went missing while the Empress was in the port of Quebec City. This was unusual as she had a litter of kittens onboard.  Although the crew found her, she left again. Despite being considered a bad omen to leave without the ship’s cat, the Empress of Ireland departed without her. The next morning while steaming through the mouth of the St. Lawrence River in thick fog, the Empress collided with the SS Storstad. She sank with the loss of 1,000 people. It was unusual for Emmy to leave the ship, especially as she had a litter of kittens, so it cannot be helped but wonder if she was forewarned by instinct.

The Mayflower ll was a replica of the Mayflower the ship that transported the Pilgrim Fathers to the New World in 1620. It set sail from England in April 20th, 1957 recreating the voyage of the Pilgrim Fathers to symbolize the solidarity between Great Britain and the US. She arrived in Plymouth, Massachusetts, on June 13th, 1957 to a hero’s welcome.

On the voyage, the Mayflower II also carried a cat named Felix along with the crew. According to crew journals, Felix was a very young kitten when he was brought aboard. He did not take to life on the ocean waves too quickly, possibly because he was so young. Nevertheless, once he had become accustomed to life at sea he soon grew strong and healthy. Apparently he was quite taken aback when flying fish landed on deck preferring his fish canned. The crew thought he would be shocked when he arrived in the US to discover that he was not the only cat in the world, possibly deflating his ego, but he had to get there first. During the voyage he suffered an accident resulting in a broken paw, which was reset by the ship’s doctor and healed fully. He was almost washed overboard by a wave, but a crew member managed to grab him in the nick of time. Despite his near misses he made it across the Atlantic.

On July 1st 1957, the Mayflower II was towed up the East River to New York, where Felix became a celebrity appearing in magazines such as National Geographic, Yankee and Life.  Along with the rest of the crew Felix took part in a New York ticker tape parade. He was finally adopted by Ann Berry, the girlfriend of the cabin boy and lived in Waltham, Massachusetts.

In 1949, a cat named Simon served aboard the HMS Amethyst during an historic event known as the Yangtze Incident during the Chinese Civil War. He became the only cat to be awarded the Dicken Medal, the animal’s equivalent to the Victoria Cross.

In the month of March, 1948, 17 year old Ordinary Seaman, George Hickinbottom, from HMS Amethyst, found Simon in the dockyards of Hong Kong, undernourished and in poor health and about 12 months old. Hickenbottom took pity on him and smuggled him aboard the Amethyst. Fortunately, he soon made friends with the crew and officers and was very good at catching the rodents onboard. He was something of character that would leave presents of dead rats in the beds of crew members and curl up and fall asleep in the captain’s hat.

The commander of the Amethyst was Lieutenant Commander Bernard Skinner, who soon made friends with the cat. When the Amethyst was sent up the Yangtze River to Nanjing to relieve HMS Consort, Simon also went along. On route the Amethyst came under bombardment from shore batteries of the People’s Liberation Army and significant numbers of the crew were killed and wounded, including Commander Skinner who died. Simon also sustained bad wounds and was taken to sick bay. Medics removed four pieces of shrapnel but he was not expected to live. However after being patched up he recovered to become the scourge of the rodents on board. His efforts helped to save the valuable supplies and boosted the remaining crew’s morale. Despite attempts at rescue by the Royal Navy, the ship was prevented from moving until 30 July 1949, when she made a daring dash for freedom at night.

In gratitude for his bravery and success in keeping rodents under control in dangerous circumstances he was given the rank of Able Seacat Simon. He also received the Blue Cross medal and the Amethyst campaign medal. On return to the UK, he succumbed to an infection and sadly passed away. He was posthumously awarded the Dicken Medal and buried with full naval honours his obituary appearing in The Times.

In 1975, The Royal Navy stopped allowing animals on board their ships for hygienic reasons, although many other private ships and boats still carry them, now possibly more as pets than for vermin control.