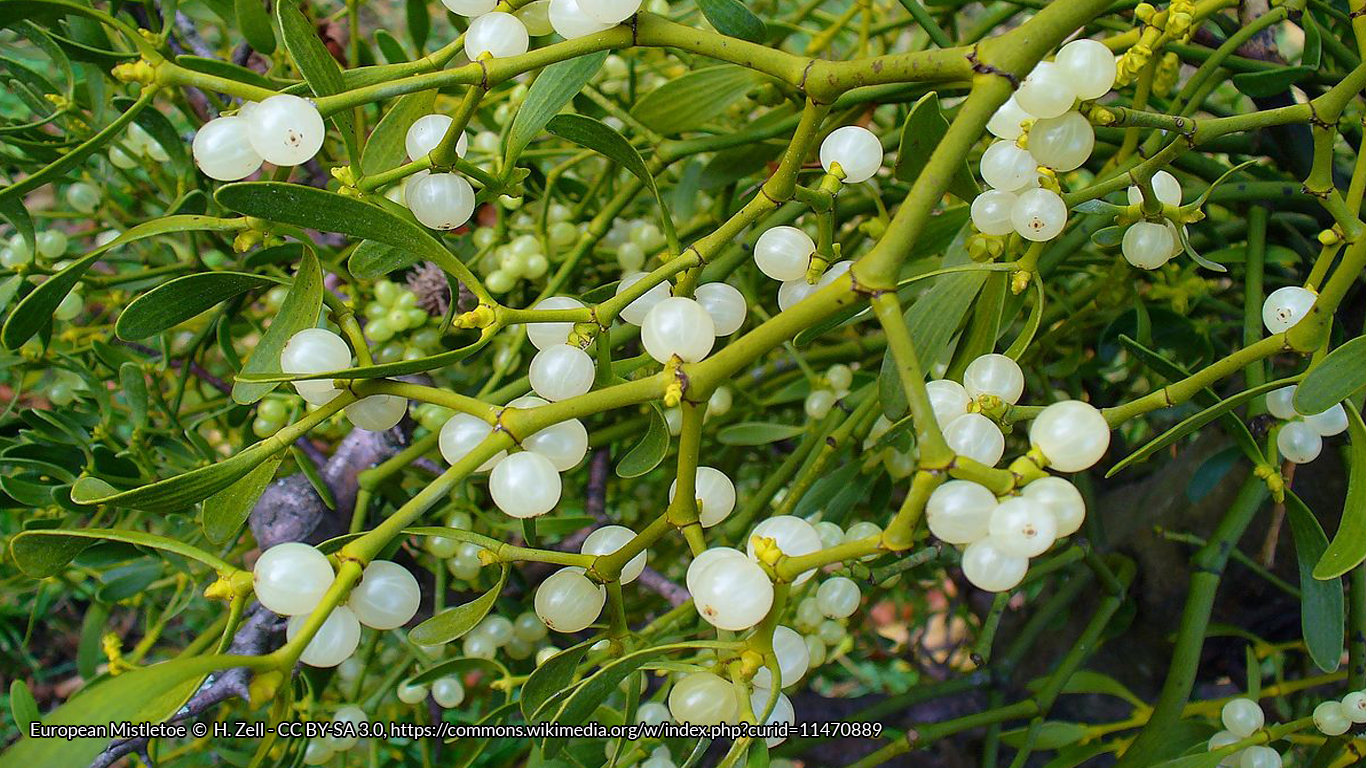 Mistletoe is the stuff of folklore.  It is found in Norse, Greek and Roman mythology, a plant of power and magic.  Druids used it in their ceremonies.  Lovers in Britain have kissed under its bough for centuries.  But in Herefordshire this mystical plant has acquired its own particular mythology.

There is an awful lot of mistletoe in Herefordshire.  Many mature trees are festooned with it, the large bunches – sometimes up to twenty or thirty of them – easy to see now that the leaves have dropped and the branches bare. Trees in orchards are weighed down with it, apple trees being particularly attractive to the plant.

In December the mistletoe is harvested and a mistletoe market is traditionally held in Tenbury Wells on three consecutive Saturdays before Christmas.  It is an institution.  Holly is for sale too in huge piles.  Buyers come from miles around to purchase the mistletoe for retail.  What is a Christmas party without mistletoe?

But in Herefordshire, in past centuries, mistletoe was not considered a plant to encourage much kissing in the festive season.  Rather it was believed to be  a plant of dark magical properties, and the activities associated with it go back to a pre-Christian age.  The place of mistletoe inside a house was not to be taken lightly or with any degree of frivolity.

Based on the research done by Ella Mary Leather (The Folklore and Witchcraft of Herefordshire), this was the custom all over Herefordshire, certainly until the final years of the 19th Century, and remaining in the area of Leominster and Kington into the 1920s.  In farming communities, a globe was woven from hawthorn twigs – another ‘magical’ tree – and incorporating mistletoe into the circle to form a ‘bush’.  This was hung in the kitchen of the farmhouse on New Year’s Day.  There it would remain throughout the year until the next New Year’s Day when the bush with its mistletoe would be taken outside and burned.  At the same time a new ‘bush’ would be woven.  Sometimes cider was poured over the new ‘bush’ to varnish and darken it, and the ends of the branches scorched in the fire, before it was brought back into the kitchen for the following year.  Definitely the remnant of some primitive ritual of protection.

New mistletoe was NEVER brought into the house at any time between one New Year’s Day and the next.  It would be highly unlucky to do so.

The burning of the old bush on New Year’s Day took place very early, sometimes as early as five o’ clock in the morning, so that the evil spirits from the Old Year would be caught up in it and destroyed, thus giving the New Year a good, clean start from from evil.  While the old bush was burning, the new one was woven, for the house must not be left without this protection overnight.  There is no evidence of what was believed to happen to a household if the mistletoe was absent, although it is suggested that it would protect the house from fire and from lightning.  During the ceremony of burning and weaving much cider was drunk and cake eaten.  Sometimes there was dancing and singing by the men-folk in a ring around the fire, ending with the deep growl of ‘Auld – Ci – der!’ and much cheering.

In some areas fire from the burning bush was carried across the fields and orchards to ensure a good crop in the coming year.  It was believed that without this ceremony, where the fire was dropped on the ploughed ridges and amongst the trees, the crops and the apples would fail.  One belief, showing the encroachment of Christianity, was that the bush represented Our Lord’s Crown of Thorns and when they carried the fire across the fields they were driving away the ‘old un’ (the Devil).

Is this custom of the mistletoe globe still carried out today in Herefordshire?  Perhaps only as a nod to old ceremonies and beliefs.   But I have my own mistletoe growing on an apple tree in my garden.  I burn my bunch of mistletoe from last year on the 1st January.  I don’t dance around the fire, or sing, but I certainly drink a glass of cider and eat cake.  And if I use a mistletoe bough to kiss my loved one, who’s to know?