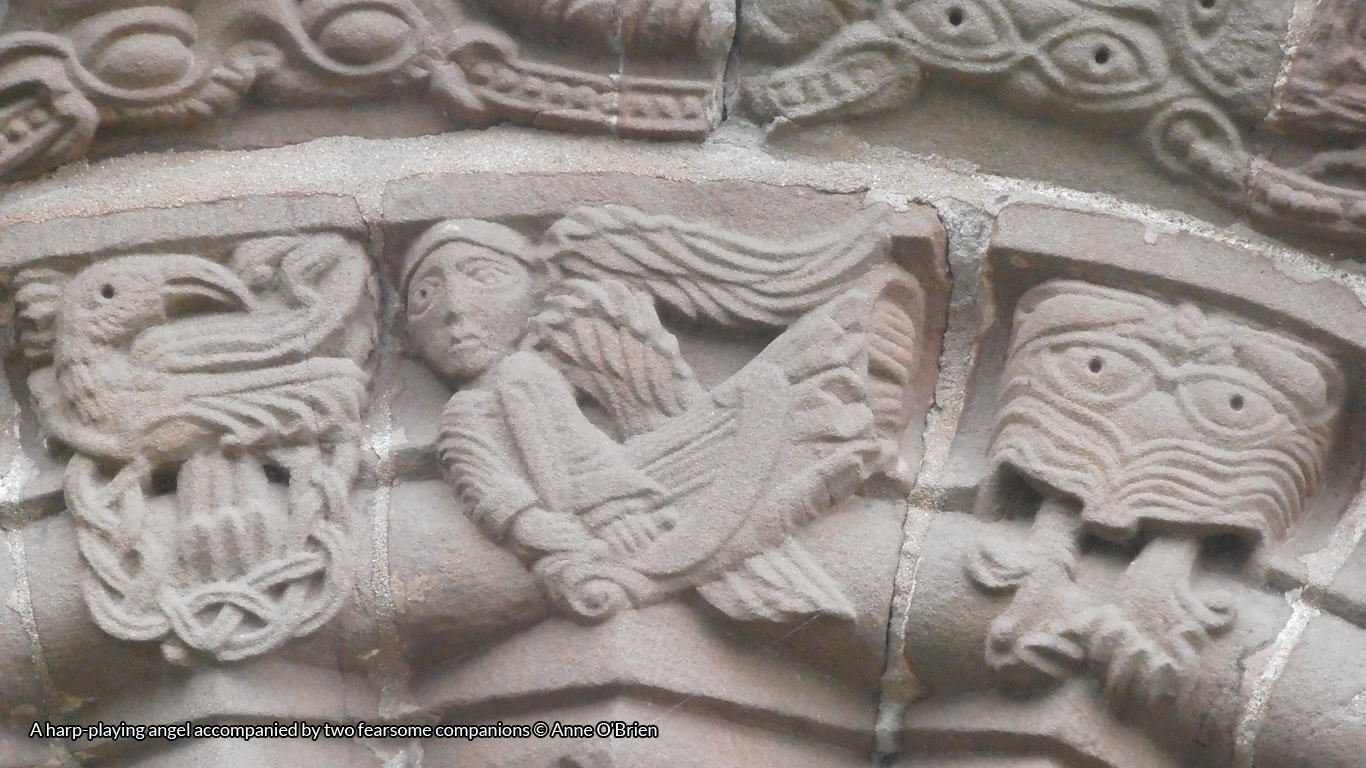 The Church of St Mary and St David in Kilpeck in Herefordshire has been a centre for Christian worship since the 12th century, and today is a place of pilgrimage.  But the Christian symbols depicted in the superb carving are not its only claim to fame.

To greet you in the tympanum as you approach the magnificent south doorway, a musical angel clutches its harp, yet it is accompanied by two fearsome companions that are not at all Christian.  This marvellous interweaving of Christian and pagan is continued throughout the church.  Yet why should a Christian place of worship be so notable a site for mythical creatures and folklore?

Because those who created  it had a wide experience of such creatures, mythical, religious and naturalistic, at their fingertips, all used to deliver the message of good versus evil and the ever-present threat of Heaven and Hell after death.

Built more or less all in one piece in the 12th century – except for the Victorian belfry and some alteration of windows – on what would have been a much older site, notable for its many springs and the elliptical graveyard, the church is the work of the Herefordshire School of Sculptors.  Influenced by Celtic, Anglo Saxon, Scandinavian and French Romanesque designs, this little church is their masterpiece.  Its semi-circular apse in true Norman style still remains.

The whole place, situated next to the ruined castle and in what was once a medieval fortified village, is magical.

But it is the carvings that are so special.  Made from local sandstone from Ross-on-Wye, so it is believed, it has weathered amazingly well.  Some of the carvings are as crisp as if made yesterday.

Perhaps the most famous piece of carving is the south doorway with its tympanum.  Here there are monsters, grotesques, snakes, a green man and the lethal basilisk as well as the central angel.  The main carving in the centre of the tympanum represents the Tree of Life.  What an astonishing mix of belief and superstition in the birds and fish and fearsome beasts.

And then there are the carvings on the corbels around the outside of the church.  Here there are monster and demonic heads, the phoenix rising from the ashes, as well as quaint figures with musical instruments and an embracing couple.

Here, with much humour, is the splendid dog and rabbit, still looking mournful after 900 years of being together.

And there there is the infamous Sheela-Na-Gig, a woman wantonly displaying her vagina, a crude device with many interpretations.  Was it to ward off evil spirits, or was she a fertility figure to represent the Great Earth Mother Goddess, a Celtic goddess of creation and destruction?  It would certainly seem to have pagan origins.

Some of the corbels were removed by Victorians who considered them too inappropriate.  It begs the question of what they might have been, if the Sheela-Na-Gig was thought to be acceptable! 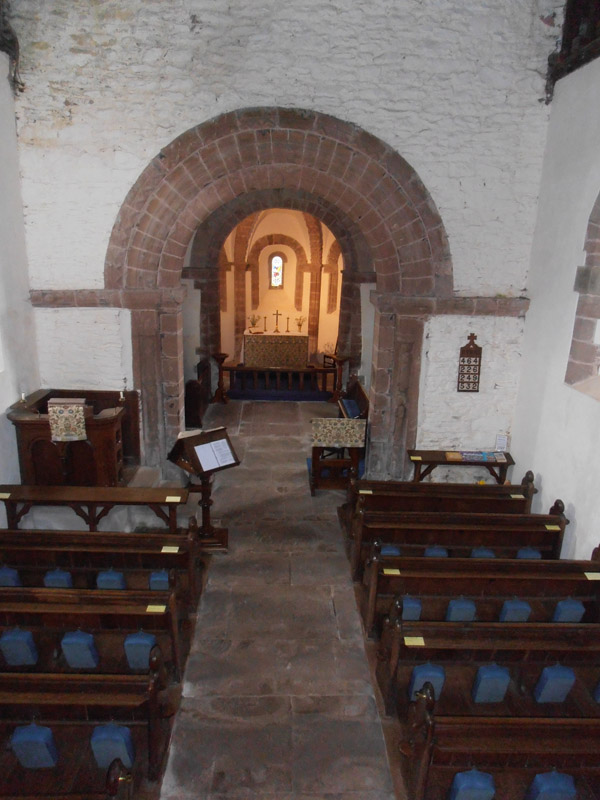 Why was such a remarkable church built in so distant a spot by Hugh, son of William Fitz Norman in about 1140?   Perhaps because a priory was established there as an offshoot of Gloucester Abbey.  Kilpeck then was not quite the isolated village that it is today.

What more is there to say?  This little church is way off the beaten track, not a place to drop into unless you know it exists between Hereford and Abergavenny on the English side of the border with Wales.  My advice would be: visit Kilpeck, make the pilgrimage, and enjoy the magic for yourself.