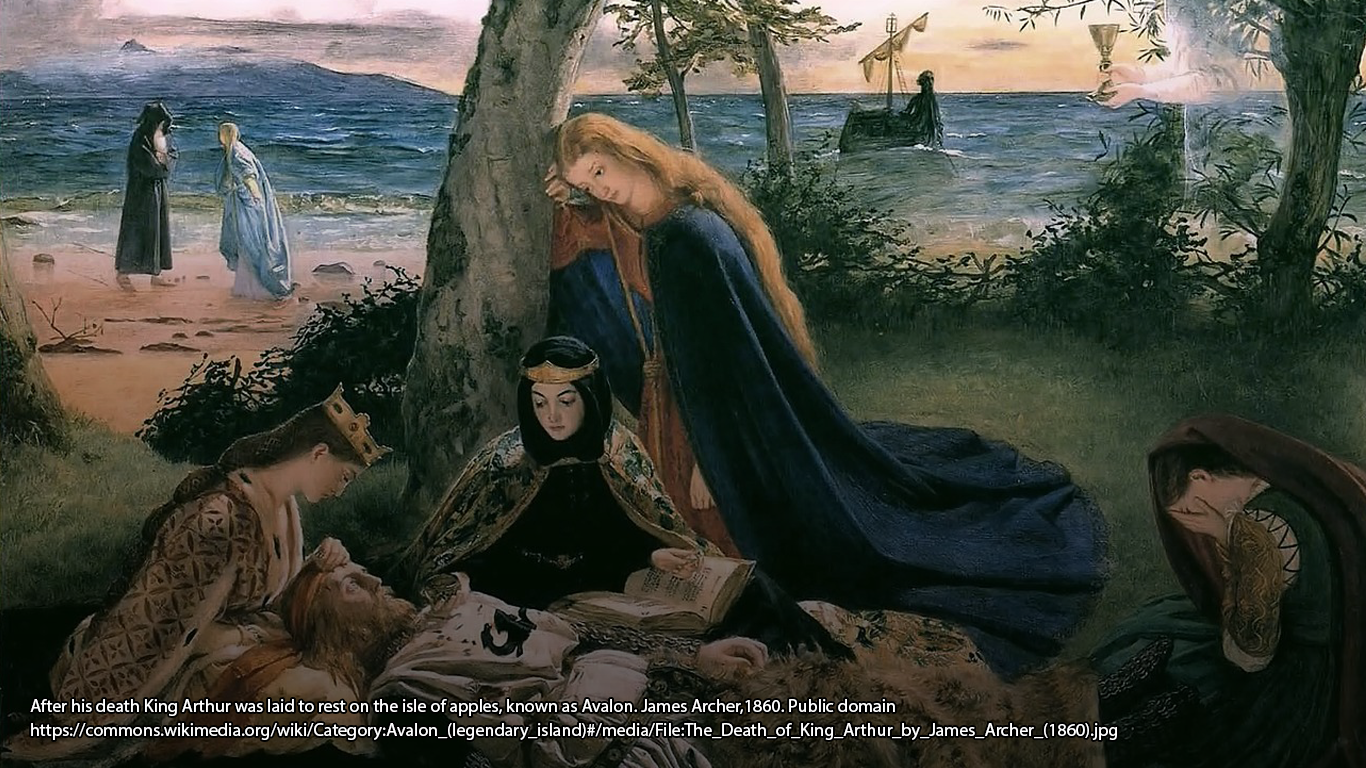 This is a sample from Ben’s upcoming book on the folklore of food, A Feast of Folklore. You can help support the book by visiting Unbound and pledging. There are some great goodies available along with the book including a witch cake baked by the author himself. 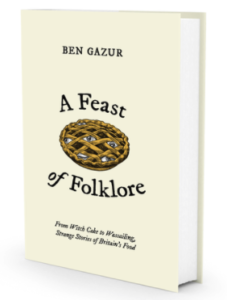 “The sweetest apples are always at the top of the tree.”

This country saying must have driven many scrumpers scrambling up trees in orchards in search of the ultimate illicit fruit. Apples were for centuries the fruit that most people would have had most often. From acerbic and sharp cooking apples to rosy red ones that crunch and release floods juice there was an apple for every palate. The number of apple varieties proliferated as farmers and hobbyists cross-bred them in pursuit of the ultimate apple. Britain is home to 2,500 cultivars out of around 7,000 developed world wide.

With apples within reach of everyone’s hands it is fitting that they have been adopted into so many strands of folklore. Even science is not immune to the lure of folklore. One of the best known stories in English history is of Isaac Newton sitting under an apple tree one day when an apple falls onto his genius noggin. This whack on the head inspired him to investigate why apples, as well as everything else, fall towards the earth. His theory of universal gravity changed the way we see the world, though unfortunately the apple part of the story is likely apocryphal.

More traditional tales see apples as protectors or rewards for heroism. King Arthur is said to have gone to Avalon after his death – Avalon being the Isle of Apples. His mentor Merlin is also associated with apples, though probably of the crab-apple variety. In the Black Book of Carmarthen, thought to be written in the 13th century, a character called Myrddin the Mad hides naked in a grove of crab apple trees to hide from his enemies. It is from this Myrddin that Merlin is thought to have developed. At least once he put his clothes back on and came out of his orchard. In the poem he praises his trees and the memories and prophesies each one sparks in him.

“Sweet appletree, growing by the river,
Who will thrive on its wondrous fruit?
When my reason was intact
I used to lie at its foot
With a fair wanton maid, of slender form.”

What better gift is there to give a loved one than an apple as sweet as they are? One of the traditional ways to share love was to share an apple. Eat half yourself and give half to the one you love and passion will grow between you as fruitful as a tree from an apple pip. It was once thought that apples should be given as Valentine’s gifts. Given the Christian association of apples with the Garden of Eden it was also perhaps suggestive of wanting to sin with the one you desire. Though perhaps not the best way to woo a partner – look what happened to Adam and Eve.

Young girls who wished to know more about their future husband were encouraged to wait until midnight to consume the sinful fruit in their bedroom. With a single candle burning behind them and a mirror in front it was thought that as soon as the apple was eaten the face of the man she would marry would appear spectrally in the glass. In some versions of this love divination ritual the apple eating had to be done while combing your hair. An alternative to combing was to cut the apple into nine pieces of which only eight were eaten. By tossing the ninth over her left shoulder and turning quickly towards the mirror the girl would glimpse for a moment the form of her future husband.

Those unwilling or unable to wait up until midnight had only to get a knife and an apple. Using the blade she had to peel the apple in a single unbroken strand. Then a rhyme was said by the person invoking the magic:

“St Simon and St Jude on you I intrude,
By this paring I hold to discover,
Without any delay to tell me this day,
The first letter of my own true lover.”

By turning around three times and throwing the peel over her left shoulder the girl would be given the sometimes cryptic answer to her wishes. The peel was said to create the shape of her husband-to-be’s name as it struck the floor. This magic tends to favour those future husbands whose names begin with rounded letters. It does not do to cast the peel too hard – if it flies apart or no clear letter was legible it meant that the girl would become a spinster.

If you do not want to give up any of the apple’s edible portions then you can always turn to the pips. Take the pip of an apple and either whisper the name or merely think it hopefully at the pip and put it in a fire. As you do so say:

Alternatively, and with less risk of burning your finger, you can simply squeeze the pip between your finger and thumb and say:

The pip will squeak out of your fingertips and fly in the direction where you will find your lover. Since this rhyme comes from Lancashire it makes sense that they would list the three towns named. They might be less helpful indicators of direction outside of the area.

In Nottingham the lucky girl who found herself with two lovers could decide between the two by taking two apple pips and naming each one after each beau. With one on each cheek the girl would say:

“Pippin, pippin, I stick thee there,
That that is true thou may’st declare.”

The girl would then wait to see which pip would fall off first. The one which fell indicated the lover who would be more likely to abandon the girl. The one that stuck to the cheek would stick with the girl.

Some places created whole festivals around the humble apple and its prognosticatory power in the matters of love. In Cornwall the 31st of October is not simply Halloween, it also marks the day of Allantide – or St Allan’s Day. Some today question the historical existence of the local bishop who became St Allan but it has not quenched the desire for his apples. If you happened into Cornwall on Allantide in earlier centuries you would have been bombarded with fruiterers willing to sell you large and shiny red apples. The larger the apple the greater the magic attached. Eating these apples gave good luck, and gifting them was even better. For young girls, and probably not a few boys, the apples went under their pillows at night as they were said to give them dreams of their future lovers. With an apple under your pillow you have to wonder what the quality of your night’s sleep was like.

Sometimes a game would be played with the Allan apples that consisted of two pieced of wood nailed together in a cross pattern suspended from the ceiling. At the end of each plank four candles were placed and lit. From the wood four apples were tied. The “fun” was in seeing who could pull an apple free with their teeth without getting splashed with hot wax. They had to make the long October night pass somehow.

Apple bobbing has long been part of Halloween tradition but there are many variations of the sport that were played throughout the country. In Scotland bobbing in water could be replaced with hanging apples from a beam and having people try and catch them with their mouths. This could lead to bruising, of both the apples and the person’s head. Sometimes it was a bannock smeared with treacle, which could get messy.

Country lore has always shown a close concern with the timings and bounty of a harvest, and apples were no exception. If you can tear yourself away from Christmas present unwrapping and visit your orchard you may see the sun peeping through the branches of your apple trees – to do so betokens a bumper year to come.

You might think therefore that apple farmers would hate to see it rain on that day but in fact a downpour on St Swithin’s was devoutly hoped for. Rain on the 15th of July was thought of as a blessing from St Swithin and represented him christening the apples. Rain was a sign of divine protection for the harvest and meant that early ripening varieties were sure to come in soon. In Warwickshire it was said: “You won’t have the jam made till the apples are christened… We never eat or cut apples until St Swithin has christened them.”

Check out A Feast of Folklore by Ben Gazur!

“British food has a somewhat dubious reputation. Who in their right mind would eat a Puppy Pie? Is a toad-in-the-hole something edible? I can even imagine some people turning their nose up at my Nan’s Toenail Pudding. The quirky nature of British food is matched by hundreds of years of folklore and folk tales that A Feast of Folklore brings to life.

A Feast of Folklore leads you down the dark alleys of British food history to meet the gloriously eccentric folk and the food they used in everything from magic spells to medicine. They even ate some of it.

Why do people hurl themselves down a hill in pursuit of a wheel of cheese? Why are hot cross buns hung from the rafters of a pub? Why do farmers shoot their shotguns through the branches of apple trees? The questions may be peculiar, but the answers are all peculiarly British.

In twelve chapters packed with more titbits of folklore than a Stargazy Pie has fish-heads A Feast of Folklore brings dark magic and deadly delicacies back into the home, where they belong. Alongside folk tales you’ll find recipes and instructions for those brave enough to give these traditions a go. Here’s a smörgåsbord of what you’ll find inside:

Inspired by Ben’s gourmand appetite for both food and folklore, A Feast of Folklore will have you looking at your Spotted Dick in an entirely new light.”