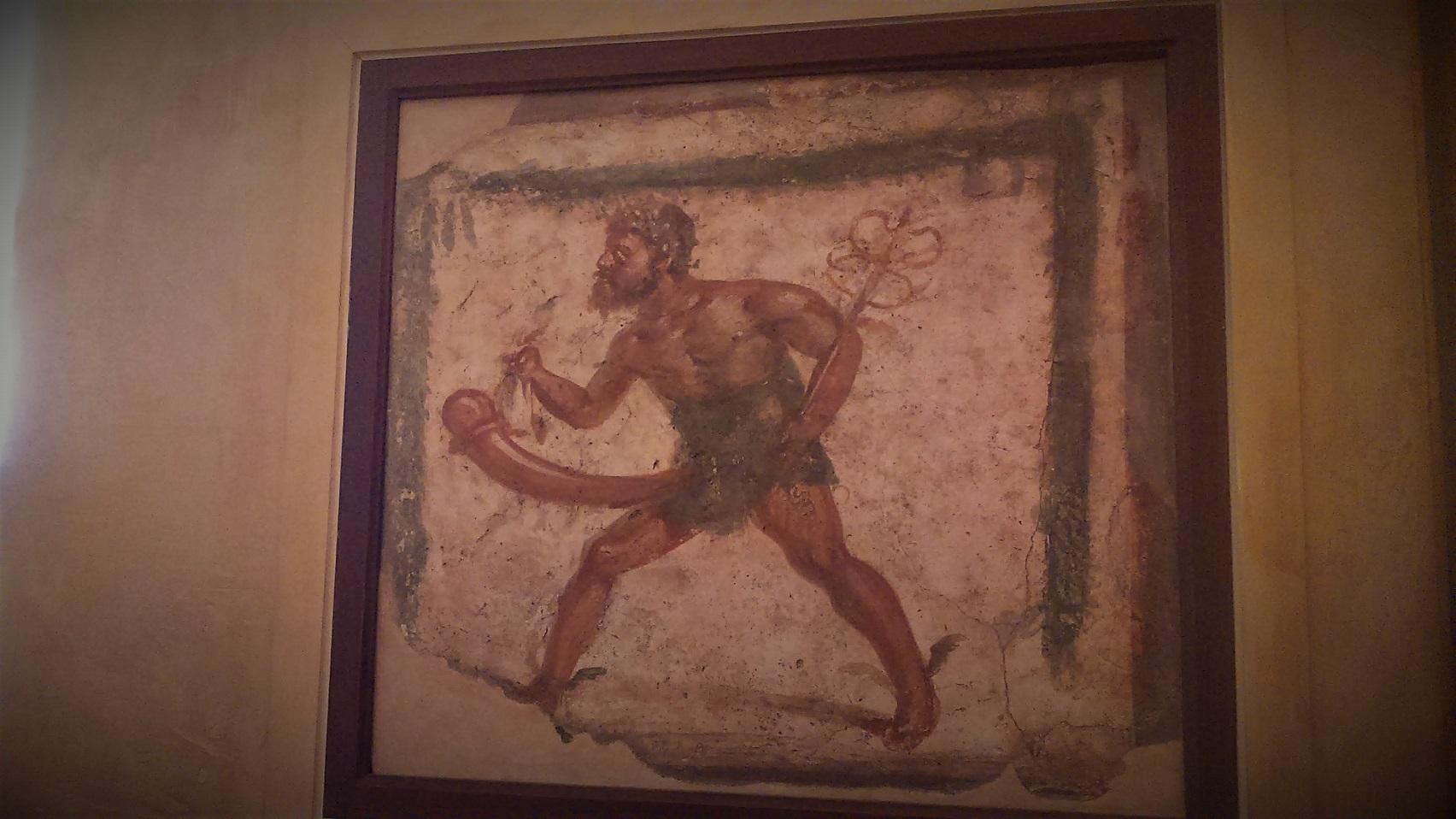 Many classical sculptures today have lost their penises to time and prudery but the ancient world was awash with explicit graphic imagery.  The survival of the ancient Roman town of Pompeii under the suffocating ash of a volcanic eruption has given us a unique insight into life in the classical age. For modern visitors one of the more startling realisations is that the Romans viewed the penis as something to be proudly displayed — on almost every surface phalluses are to be seen.

In the 19th century excavations at Pompeii were revealing a side of Roman culture never before suspected. Classical sculptures were much sought after by noble collectors eager to show off their sophistication yet from the ruins of the town came crude works such as “Pan copulating with goat.” No plaster fig leaf could be added to this to preserve modesty. Lamps, door hangings, signs, rings, and frescoes all gloried in their proud displays of phalluses. So shocked was King Francis I that he had all the erotic images in Pompeii locked up in a “secret cabinet” that only scholars, or gentlemen willing to pay a small fee, were allowed to peep at. Women were not permitted entry. Indeed the entrance for a time was bricked up so that no one could enter. Only in 2000 was the contents of this secret museum fully open to the public. What was going on in Pompeii? Just why was the phallus so widely displayed?

Sometimes a phallus is just a phallus, as Freud so nearly said. To enter the minds of the ancients one must abandon modern conceptions of modesty. To be nude in public was not shameful for a man. It would therefore be truly perverse if the penis could be seen in real life but not in art. On the stage in comedies actors wore enormous stuffed leather penises for the amusement of the crowd. Just as today, the penis could be looked at as a funny appendage that renders men slightly ridiculous. Undoubtedly though there was more than simple verisimilitude and vaudeville in the depictions of the male member in the ancient world.

The Romans borrowed much of their culture from the Greeks, and a predilection for penis was one of the things which came with that. Of course in the deeply patriarchal society of the Athenians and other city states the idea of male power would be easy to conflate with the penis. It is the use of the phallus in religious symbolism by the Greeks which allows us to guess at the later Roman use. On the holy island of Delos, birthplace of Apollo and Artemis, is a site sacred to Dionysus. The Stoibadeion, a temple to the god of wine, featured a statue of the deity flanked by two enormous erect phalluses one of which is on a base with a carving of a cock (in this case a male chicken). But even the rooster must take part in the celebration of the phallus — its neck elongates into a penis and not a beaked head. Writers such as Herodotus and Philostratus mention worship of Dionysus revolving around a phallic object. When we realise that Dionysus was a fertility god, and not just the divinity in charge of parties, we can better understand how the penis became one of his symbols.

Yet more sober gods also used the phallus as a symbol of their power. A herm is a statue of a human head on a square pillar. Often these herms showed the god Hermes but other divinities and humans could be shown. Almost always they also showed male genitalia on the pillar. These were not objects of humour, but of devotion, and they changed the course of history. Just as a vast Athenian fleet was about to set sail for an invasion of Syracuse all of the herms in the city were vandalised. While not explicitly stated it is thought that this involved smashing the phalluses. This wildly impious act was thought to spell disaster for the war and was used to strip the commander of the fleet of his position. Without strong leadership the invasion failed and thousands died.

The Greek god which most influenced the Roman regard for the penis though was probably Priapus.  His condition gave a name to all uncomfortably and overly long-lasting erections — priapism. An unfortunate deity cursed with a pendulous and massive erection he was a god of fertility. Pausanius describes him as “[a] god… worshipped where goats and sheep pasture or there are swarms of bees.” The obvious nature of his genitals and their relation to fertility and generation would find their equal in the unabashed, and marvellously named, Roman god Mutunus Tutunus.

Mutunus Tutunus had many of the same qualities as Priapus but, instead of being depicted as a man with a giant penis, it seems Mutunus Tutunus was simply a huge phallus. According to some early Christian sources, obviously hostile to the pagan Mutunus Tutunus, brides would be led to his temple before marriage to straddle the phallic deity in hopes of blessing their union with children. There were strong precedents in Roman myth for receiving children from a magical phallus. In what Plutarch recounts as an alternative story of the birth of Romulus and Remus a ghostly phallus rises from the embers of a fire one day. An oracle tells king Tarchetius that a virgin must have sex with it to banish it, and he offers up his daughter. Perhaps unsurprisingly she is unwilling to couple with it and instead sends her handmaiden to do the deed. The servant conceives Romulus and Remus in the union. A later Roman king called Servius Tullius is likewise said to have been born when his mother copulated with a penis appearing from a fire.

Mutunus Tutunus and Priapus came to both have roles in Roman life, apparently never crossing swords over who would be dominant. The Romans association of the phallus with fertility led to Priapus being used to watch over gardens and farms. Virgil apologised to his statue of the god for his scant offerings: “A bowl of milk, Priapus, and these cakes, are all you can expect year by year; the garden you watch is poor.”

Despite seeming to be the antithesis of penis-worshippers, the Vestal Virgins of Rome were apparently in charge of the worship of Mutunus Tutunus, under the name of Fascinus. The name seems to be linked to Latin fascinum — spell or witchcraft. Indeed the penis did seem to fascinate the Roman mind. Pliny the Elder records that a phallus was attached to the chariot of generals as they rode in triumph through Rome. The fascinus, a depiction of a phallus, was thought to ward off envy that might otherwise be attracted.

In this role as an apotropaic symbol (one which keeps evil away) the phallus could be found everywhere. In one famous mosaic the ‘evil eye’ is seen being attacked by various lucky charms including a swollen phallus. The use of the phallus as a charm perhaps explains why it was a popular motif in jewellery. Rings were a favourite method of keeping a phallus handy. These often appear in children’s graves suggesting they were thought to be especially helpful in protecting the young ones that fertility gods helped to bring into the world.

Despite all this literary and physical evidence of the phallus as a potent symbol in the classical world, we must not get too cocky. Returning to Pompeii will show that we cannot fool ourselves into believing we know exactly what was going on in the ancient mind when they saw a penis. Phalluses can be found carved into into the paving slabs of ancient Pompeian roads. Some have theorised that these pointing pricks may be directing punters to the nearest brothel, though there is little evidence to support this. They may also be generic good luck marks to protect the street but the truth is no one can say with any certainty. Diogenes of Pompeii was a builder who advertised his trade with a plaque carved to show the various tools of his trade. Nestled among these tools is a phallus. Quite what use that would be on a building site can only be guessed at. Good luck? A way of catching the eye? No one knows. Only more digging in the dirt will reveal more details about Rome’s dirty little secrets.

Perhaps our best guide to the Roman relationship to the phallus is to be found in a bakery in Pompeii. A relief outside the shop shows a very prominent penis and around it is written “Hic habitat felicitas” – “Here lives happiness.”

Pliny the Elder, The Natural History