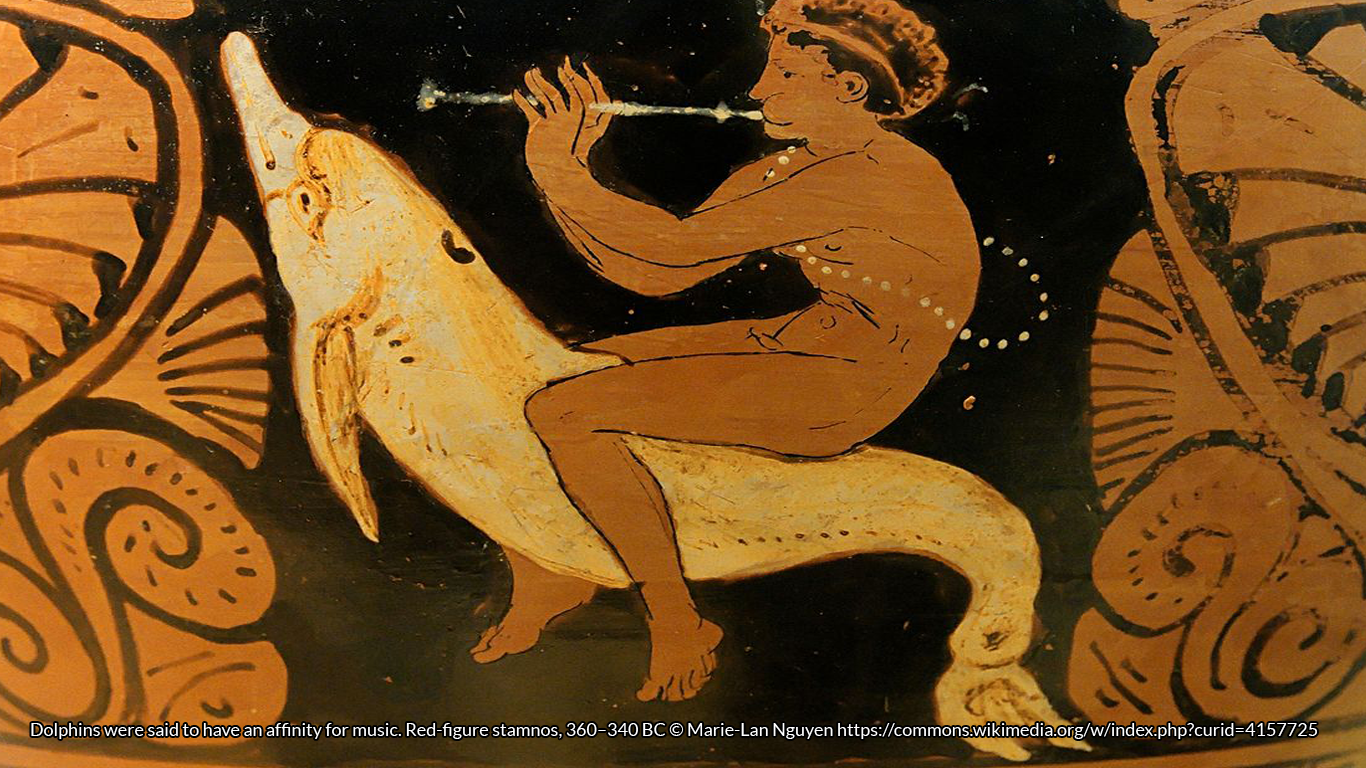 Dolphins leap from folklore wherever people sail the ocean. The Greeks and Romans took their tales from these playful, mischievous creatures.

For the Greeks and Romans access to the Mediterranean was their link to the rest of the world. It was so central to the Roman Empire that they simply called it Mare Nostrum – Our Sea. It is natural then that in their journeys they should encounter intelligent and inquisitive dolphins. Equally naturally, they would develop stories about these remarkable animals. We’ll look at three areas: dolphins in medicine, folk tales, and myth.

There are records of the meat and blubber of dolphins being eaten. Besides the nutritional benefits, it was believed that dolphins had medicinal properties. When medicine is ineffective, the more outlandish its ingredients the more powerful its mental hold. Pliny the Elder tells us that skin marks and spots can be removed by rubbing them with a paste made from the ashes of a roasted dolphin. Equally efficacious was the grease that oozed from a dolphin’s baked liver. Dolphin liver also treated recurrent fevers. For dropsy, an old term for oedema or the collecting of fluid in the body, Pliny suggests taking the blubber of a dolphin and melting it in wine. He offers the handy hint that the nauseous odour of the mix can be offset by smearing the nostrils with a perfume. Or, he adds, simply block them up somehow. For those who have struggled to help a toddler survive the anguish of teething, the dolphin comes to the rescue. A dolphin’s tooth provides the remedy for gum pain. The ashes of a tooth can be mixed with honey and massaged into the sore area, or simply touching the area with a whole tooth may help. If your child survives your ministrations, then a tooth can be worn as an amulet to protect them from sudden frights.

Dolphins were not however merely useful in their parts. Many sources from the ancient world record legends and tales of live dolphins coming to the aid of humans. This is a reputation they still share today. The constellation Delphinus, the Dolphin, has several myths attached to how a dolphin may have ended up in the heavens. One is that it was placed there by Poseidon in memory of Delphinus, king of dolphins, who helped him in a seduction, but the other refers to a rescue by a dolphin. The poet Arion of Lesbos had amassed a fortune serving as a court performer and was returning home. The crew of the ship he was on decided that money in their pockets was better than money in his. They robbed him and were about to cast him overboard when he asked to be allowed to sing one last song. He sang a mournful dirge and then threw himself overboard. Instead of drowning, Arion was saved by dolphins that had been moved by his performance. Aristophanes and Euripides both refer to ‘music-loving dolphins’ in their works, so it must have been a well known trope of dolphin stories. Pliny tells us that dolphins are particularly fond of water organs – well they would be, wouldn’t they?

There are many tales of rescue at sea on dolphin-back, but many came to form longer-lasting relationships with man. Pliny recounts the tale of a dolphin in the Lucrine Lake, a salt-water lake beside the sea. This dolphin watched a boy walking along the banks to school everyday. The boy would see the dolphin and feed it with chunks of bread. Thus fed, the dolphin would allow the boy to hold his fin and would swim the boy across the lake to school and return home with him later. Was there ever a case of a dolphin ate my homework? This friendship lasted until the boy died suddenly of an illness. It was said the dolphin died soon after from sorrow when he waited for his friend by the shore but he never arrived.

Another of Pliny’s tales of dolphin-human friendships also ends badly. When a boy called Hermias was taken out to sea by his friendly dolphin, a storm rose up. The boy drowned and his body was brought back to shore by the dolphin. It is said that the dolphin realised it had caused the death of Hermias and beached itself on the sand to die beside his friend. Athenaeus, in his “The Deipnosophists” – The Experts’ Dinner, tells the story of one dolphin that formed so strong an attachment for a boy in the city of Iasus that when it saw him on the shore one day it leapt up onto the land. There it expired. But the story ended happily for the boy. Alexander the Great heard this story and, believing it was a divine sign, made him high priest of Neptune.

Dolphins were known to serve as messengers from the gods. Taras, son of the ocean god Poseidon, was saved from a sinking ship by a dolphin sent by the old man. Brought to shore, Taras decided to found a new city. A city he decided to call Taras after himself – today it is known as Taranto. The image of Taras of dolphin-back became the icon of the city. Athenaeus also gives us the story of Coiranus the Milesian who rescued a dolphin from some fishermen. He paid the men for their catch and returned the dolphin to the sea. When Coiranus was later shipwrecked everyone else aboard drowned except him, who was rescued by a dolphin. When Coiranus died of old age and the funeral was taking place beside the sea, a great many dolphins were seen in the water as if attending to pay their respects.

Aelian in his compendious “On Animals” relates some stories of animals not only befriending humans, but helping them in their business. At Poroselene a tame dolphin lived in the harbour. It had been fed by hand by an old couple, who raised it as their foster child alongside their son. As soon as it was old enough to brave the deep sea it would go out and hunt fish to bring back to its human family. The human son in turn learned to love the ocean and would swim with the dolphin to bring in money from sightseers. In Euboea, fisherman were said to work in tandem with dolphins. On calm nights they would sail out with fires burning on their prows. This light would dazzle the fish below and attract dolphins. The dolphins would then herd the startled fish towards the men’s nets. For this they were thrown a portion of the catch. This might sound like another one of Aelian’s far-fetched ‘facts’, but in Laguna in Brazil you can watch wild dolphins driving fish towards fishermen wading in the waters.

The ancients seem to have recognised that there was something uncanny about dolphins. They were like fish, but not fish. They knew that unlike fish dolphins had to surface to breathe, like a human diver. They knew that dolphins form communities and there is a deep bond between a mother and her offspring. Aelian even talks of how this can be exploited – catch a baby dolphin and the mother will swim right into your net to try to save it. They were clever and fast. Pliny calls them the fastest of all animals. The Greek poet Pindar, author of odes on the prowess of athletes, often complimented a runner’s speed by comparing it to that of a dolphin through the waves.

It was clear that dolphins were special. They feature in religious images as far back as we can find. And you had best be careful what you do to a dolphin, as it might just be a god staring back at you with those almost human eyes. In the Homeric Hymn to Apollo, the god is in search of a place to erect a temple. Feeling lazy, he takes the form of a dolphin and leaps about a ship travelling the Greek seas. It is only when he spots the harbour beneath what would become his great temple at Delphi that he returns to the sea, declaring to the men on the ship that:

And whereas I first, in the misty sea, sprung aboard the swift ship in the guise of a dolphin, therefore pray to me as Apollo Delphinus [Apollo the Dolphin].

There is a more uncomfortable tale told about a Greek god and dolphins in another Homeric Hymn. Dionysus was the Greek god of wine, fertility, and theatre, but he also inspired divine madness and frenzy. In his Homeric Hymn Dionysus has taken the form of a handsome youth, and is standing by the sea when he is captured by pirates. Taking the young man for a prince, they imagine their rewards as they try to tie him up. But the ropes will not hold. Only the helmsman realises what has happened, and tells the pirates to release the god they have foolishly taken captive. He is told to shut up and they get the ship moving out to sea. Immediately, miraculous things begin occurring. Wine bubbles up from between the planks. A vine grows up the mast, hanging with fat grapes. A lion and a bear appear to terrify the crew. Stuck between madness and the deep blue sea, the crew plunge into the waters and are transformed into dolphins. The god then charges them to help men in peril on the sea for their crimes. That is why dolphins have the ability to feel very human and very alien to us. They are us, and they are not.

Dolphins can be cuddly or creepy in their human-like behaviour. Their unique position in the animal world has inspired myth in the ancient world, and still resonates with people today.