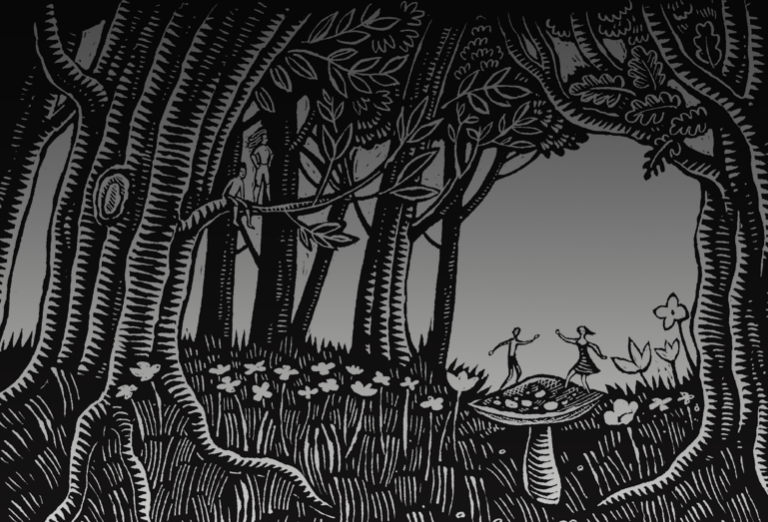 Come with us now on a journey into the forests; walk with us as we delve into the tales and traditions enfolded within the woodlands of the world. Pick up your lantern and step into the dark branches as we dig deep into the soil to unearth their mysteries. There are stories to be heard, so listen softly, and you will hear the tales the leaves of ages whisper into the wind …

An entertaining and enthralling collection of myths, tales and traditions surrounding our trees, woodlands and forests from around the world. From the dark, gnarled woodlands of the north, to the humid jungles of the southern lands, trees have captured humanity’s imagination for millennia. Filled with primal gods and goddesses, dryads and the fairy tales of old, the forests still beckon to us, offering sanctuary, mystery and more than a little mischievous trickery. From insatiable cannibalistic children hewn from logs, to lumberjack lore, and the spine-chilling legend of Bloody Mary, there is much to be found between the branches. Come into the trees; witches, seductive spirits and big, bad wolves await you. With this book, #FolkloreThursday aim to encourage a sense of belonging across all cultures by showing how much we all have in common.

Pick up your copy here!

The leshy, leshii or lyeshy is a Slavic tutelary spirit of the woods, and a protector of the trees and animals; in Ukraine he is guardian of wolves above all other animals, while others say he is only servant to his favourite animal, the bear. Like bears, the leshy hibernates in winter. Known by many different names, all usually show these creatures to belong to the forests, and as being ruled by either the woodsman or the Devil. Many liken them to Greek satyrs, human from above the waist but sporting horns, claws and a bushy beard that some report as forest green, while others say they are entirely covered in moss. They are shapeshifting creatures, changing size and form at will: they are able to grow taller than a tree, or as short as a blade of grass. Some say they appear huge from a distance but are tiny up close. Leshies can disguise themselves as any familiar human, animal or plant of the forest. When appearing in human form they can be identified easily in that they never have eyelashes or brows, they might wear their shoes on the wrong feet; in Yaroslavl Province in Russia they will have their skirt or kaftan wrapped in the opposite way to the local fashion. Some have only one eye, but all are covered in wild hair, with the cloven feet of the fauns – or the Devil himself. In some regions they have wings and a tail with black fur; in others they wear white and always have swollen eyes.

Their bellowing whips up great winds when they charge through the forest surveying their territory, and all the creatures flee in terror. If people encroaching on their forests uninvited do not flee when warned by the leshy’s shrieking laughter, clapping or howling, they will often be lost to the wilds by morning, after the leshy has confused them, lured them from the path and changed their surroundings about them, and they are never seen again.

As with other fabled creatures of the forest, leshies are trickster figures, able to alter their voices to mimic others, enticing people towards them, where they can, apparently, tickle their victims to death. Their voices can also sound like creaking branches or rustling leaves. Illness can befall those who cross a leshy, and they abduct women to marry – or otherwise – and often take children found wandering in the forest or those cursed by their parents. The creatures were famous for inflicting their wrath and cursing entire farms, sucking the milk from the herd; in response, famers from the Olonetsky District of Russia used to sacrifice a cow to them annually to ensure the welfare of their cattle. Those who say a prayer before entering the forest, or leave offerings of bread, tobacco and the like, are safe from their wrath.

For some, the most famous world tree is Yggdrasil of Norse mythology, said to be an evergreen ash in the poem ‘Völuspá’ from the Poetic Edda. Within it lie the nine worlds of the Norse cosmos; some appear vertically along its trunk, while others
are arranged horizontally. The realm of the gods lies at the top, the worlds of humankind and giants at the middle, and the underworld at the bottom. The tree is known by the kennings ‘Odin’s horse’ and ‘Odin’s gallows’, as he sacrificed himself by hanging upon it. Its top is so high that it reaches above the clouds and is snow-capped, while winds tear around its branches.

Three roots delve deep into watery places beneath the tree, and different sources say that they are in different locations. One lies over Mímir’s well of wisdom, where the god Odin sacrificed his eye for a drink of the waters. It crosses into the land of the rime giants, which was once where the yawning primordial void of Ginnungagap could be found.

Another root is over the spring Hvergelmir, meaning ‘the Cauldron-Roaring’. This is in Niflheim, a place of mist, cold
and ice. It is here that Níðhöggr the monstrous serpent gnaws at the tree’s roots from the dark mountains of the underworld, and sucking the blood of the slain. Hel lives under this root in her underworld realm of the same name, a place of darkness and the dead, some believe to be underground. Hel is sometimes seen as the goddess of death in Norse mythology, a giantess who rules over the portion of the dead who were not taken off to other realms on their passing. It is said half the warriors who fall in battle go to Valhalla, the ‘Hall of the Slain’, ruled over by Odin. The other half go to Fólkvangr, the field of the goddess Freyja; women who have faced a noble death can also reside here in the afterlife. The 13th-century Icelandic scholar Snorri tells us at one point that those who die of illness or old age are taken by Hel, yet many suggest he often exaggerated original sources of Norse mythology, while others say he invented his own lore. We do know that Hel is the daughter of Loki and Angrboðr the giantess, cast out by the gods with her siblings, Fenrir the wolf, and the Midgard Serpent, Jörmungandr. It is said that she is half white, and half black like a decaying corpse.

The poem ‘Grimnismol’ tells us that beneath the last root is the land of men, while ‘Gylfaginning’ tells us one is over the well of Urðr in the heavens among the gods, belonging to the three norns who weave the fate of humanity: Urðr, Verðandi, and Skuld – representing the past, the present and the future. It is here that the Æsir gods come each day over the rainbow bridge Bifröst to hold court and conduct their business. At the top of the tree is Hlithskjolf, meaning ‘Gate-shelf’. This is Odin’s tower, where he sits with his ravens, Huginn (meaning ‘thought’) and Muninn (‘memory’ or ‘mind’), and watches over all of the nine worlds from the heavens. From here, he sees all – from everything humankind does, to the acts of the gods.

Many animals live among the branches of Yggdrasil. An eagle resides at the top of the tree, and a chattering squirrel, Ratatoskr, runs up and down passing messages between it and Níðhöggr the serpent. The stag Eikþyrnir feeds from the branches of the tree from the top of the hall of Valhalla, the afterlife home of warriors who died in battle. The goat Heiðrún also grazes on its leaves. While both the stag and goat feed from the tree named Læraðr, many identify this as Yggdrasil itself.

When the tree shivers and groans it is said that Ragnarok, the end time, is near.

Werewolves: Creatures of the Night

The woods are still and quiet as the weary traveller hurries on, the moon high above the trees to light his way. This brings little comfort, however, and he glances behind him and around, eyes wide with terror at the thought of what might lurk, waiting to pounce. He is right to be afraid: in the distance comes the unmistakable howl that strikes fear into the hearts of all who hear it. For it belongs to a fierce creature, born of darkness, that knows no mercy: the werewolf.

Fearsome as the wolf was thought to be, the threat of the humble lupus pales before the sinister shadow of the werewolf. Meaning quite literally ‘man who can transform into a wolf’, werewolves have been prominent in the history and folklore of Europe for centuries. These creatures were greatly feared: possessed of tremendous strength, they were said to lust after human blood and terrorize villages, people and livestock. These cursed creatures are also found in folklore across the world, in Asia, America and Africa.

Far from a modern invention, werewolves are mentioned well back into antiquity. In the 2nd century bce, we hear of King Lycaon who, after angering the gods, was transformed into a wolf as punishment. Belief in such creatures continued unwaning through the Middle Ages and became linked inextricably with the witches and witch trials of the 15th to 17th centuries. Werewolves were accused, tried and condemned in the same manner as their witch counterparts. Today, werewolves continue to captivate and stir fear, featuring in films, books and television shows.

There were various tell-tale signs that gave away the identity of a werewolf if you knew what to look for. Perhaps a person’s eyebrows met suspiciously in the middle, or their fingernails curved in a manner reminiscent of claws. They might have a distinctive, loping gait, or ears set lower on the head than usual. If you were brave enough, cutting the skin to reveal the fur beneath was also a manner of identification. After turning back into a human, werewolves were known to be lethargic, drained of energy, so anyone who was in that state come morning might be considered suspect.

If you enjoyed this preview of Treasury of Folklore – Woodlands and Forests: Wild Gods, World Trees and Werewolves, why not check out #FolkloreThursday’s other book, Treasury of Folklore: Seas and Rivers Sirens, Selkies and Ghost Ships, published by Batsford Books and illustrated by Joe McLaren!

nthralling tales of the sea, rivers and lakes from around the globe. Folklore of the seas and rivers has a resonance in cultures all over the world. Watery hopes, fears and dreams are shared by all peoples where rivers flow and waves crash. This fascinating book covers English sailor superstitions and shape-shifting pink dolphins of the Amazon, Scylla and Charybdis, the many guises of Mami Wata, the tale of the Yoruba River spirit, the water horses of the Scottish lochs, the infamous mystery of the Bermuda Triangle, and much more. Accompanied by stunning woodcut illustrations, popular authors Dee Dee Chainey and Willow Winsham explore the deep history and enduring significance of water folklore the world over, from mermaids, selkies and sirens to ghostly ships and the fountains of youth. With this book, Folklore Thursday aims to encourage a sense of belonging across all cultures by showing how much we all have in common.