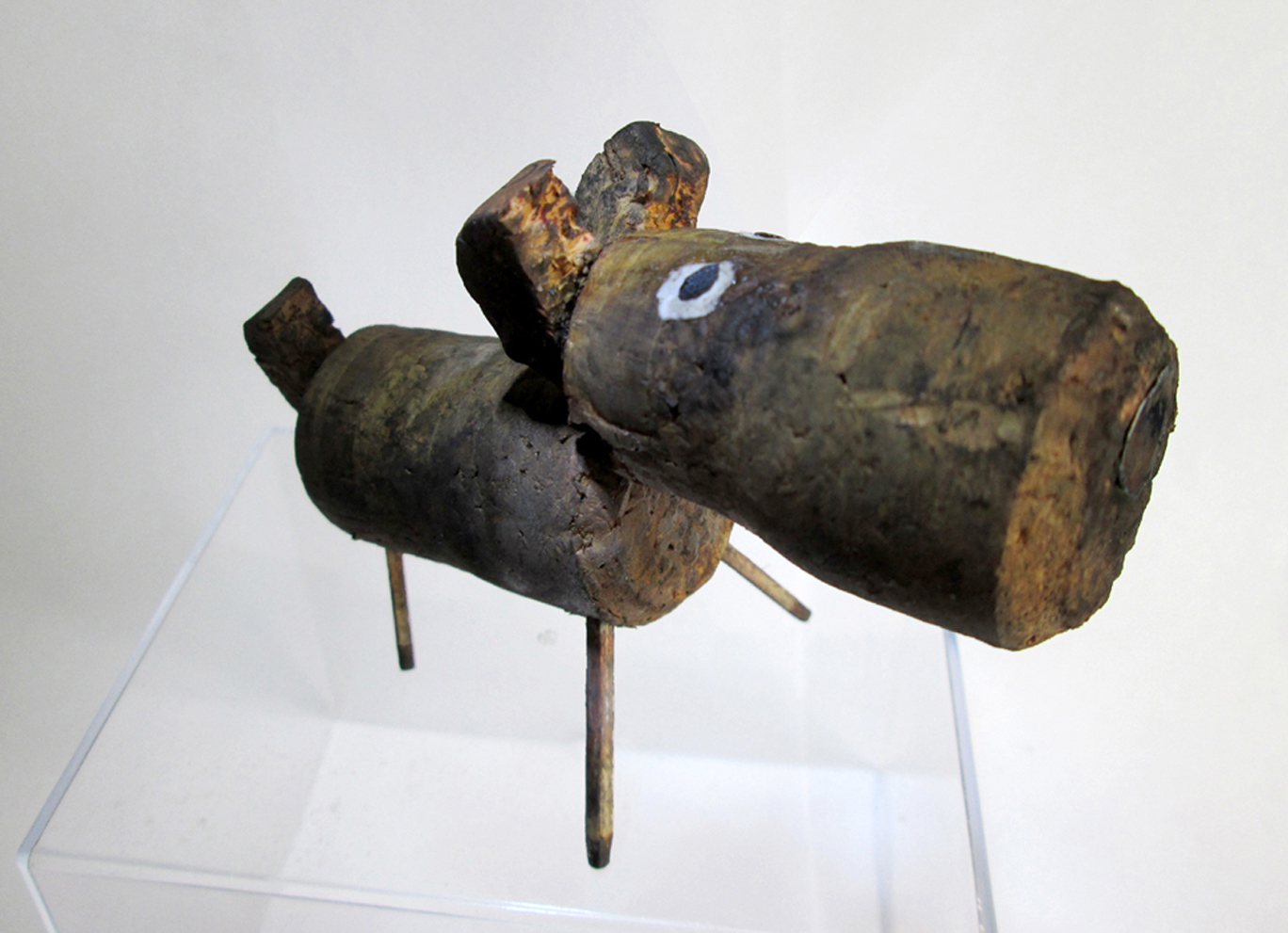 Before setting off on longer than usual voyages, sailors would have ‘one’ last drink in their local pub before embarkation onto their ships and boats. They would enjoy a favourite tipple, smoke a pipe and sometimes they would make a small model dog with corks and match-sticks. These tiny cork companions would travel with them to distant ports in exotic far-off lands and upon their safe return would be gifted to their children.

These little fellows were seen as good luck charms and also gave the sailors something else to think about whilst preparing for long, arduous and often perilous voyages. Also, making a cicorc in a bar served another more practical purpose – it was a signal to other sailors and locals that you were about to set off on an unusually long trip and was an unspoken invitation for them to wish you well and buy you a farewell drink, or three …

The making of such a cork and match-stick dog before the journey was a superstitious statement of trust in providence that the traveller was going to return safely and so be able to give the cicorc to their children. Corks and match-sticks would have been a plentiful waste product in any Victorian bar, but using these materials is thought to have had another superstitious significance: because corks are unsinkable and will usually return on the tide if thrown into the sea, they were also seen as being sympathetic to a safe return. Dogs were the chosen subject because they were symbols of home, friendship and fidelity.

Last September, I was writer in residence at Helfa Gelf’s Haus of Helfa 2015. This was a creative residency involving thirteen artists who occupied a semi-derelict building in the North Wales coastal resort of Llandudno. The house used to be an RAF servicemen’s club and is locally known as ‘The Tedder House’, named after RAF Marshall, Arthur William Tedder, 1st Baron Tedder, GCB, who devised the method of ‘carpet bombing’ used near the end of World War II.

Each artists was assigned a room in which to work and interact with the public. Being a writer, the room assigned for me was, naturally, the bar. The bar was in the process of being restored using furnishings reclaimed from local hotels that had been abandoned and were also falling into dereliction.  The bar itself was brought from the Tudno Castle and during its installation, a couple of corks were found, assumed to have fallen from within a void. On closer inspection, it was clear these dusty old corks were a crude, yet undeniably charming model of a dog, with legs made from match-sticks.

I am, of course, interested in stories and my original intention for the residency was to collect hearsay and folklore from the visitors during the open-door policy. This little cork dog certainly sparked my imagination, so I placed ‘Corky’ in pride of place on the bar as a talking point, hoping for locals with their local knowledge to shed some light on its possible origins. This worked a treat and generated lots of interesting and delighted conversations from visitors of all ages. Grown-ups were charmed and children were highly engaged, even making up some cicorc stories of their own – unprompted – to tell me. The stories I collected ranged from personal anecdotes and family mythologies to hearsay and conjecture. I also learnt that some bars and inns along the coast of North Wales were constructed using the salvaged timbers from shipwrecks.

My primary output from the residency was a short story about the journey of one particular cicorc and how it played its part in bringing home a lost sailor to be reunited with his family.  During the residency I made ten ‘replica’ cicorcs that were offered up for ‘adoption’. The numbered and signed Haus of Helfa edition all sold and are now having their own continuing adventures. Each was named after a nineteenth century vessel that was wrecked off the North Welsh coast. The story explored the ideas of transaction, transport and depletion, linking those ideas, poetically, to cargo, voyages and farewells.

I learnt by making and, apart from the eyes and nose decals, there is no glue used in the construction and they are made from ‘authentic’ materials, just as they would have been in the nineteenth century. Each unique cicorc was sold with an explanatory booklet that also contained my short story, which is currently being developed by a publisher into a picture-book for children.

As with any folklore, the stories of the Cicorcs (apparently the proper pluralisation in Welsh would be cŵncorc) is based almost entirely on hearsay. There is very little evidence save for the oral hand-me-down tales told by the descendants of local fishermen, boat-makers and seafarers … and then there is ‘Corky’ – merely an old children’s toy, or a sailor’s good-luck talisman that had voyaged to far off lands and ports exotic, before finding its way back home to Llandudno? If the ‘little fella’ could talk, what tales he would tell?

FOOTNOTE: The ‘Ci Corc’ (which simply means ‘cork dog’ in Welsh) is also thought to be the origin of the breed name for the Welsh cattle dog, favoured by the Queen, the corgi – because their barrel-like physique and russet colouring is said to resemble the traditional cork dogs of County Conwy.

If #FolkloreThursday followers would like to purchase their own unique, hand-made, replica cicorc with accompanying information and short story booklet, direct message Remy on Twitter at @DeanAuthor and you will be given a special #FolkloreThursday discount.