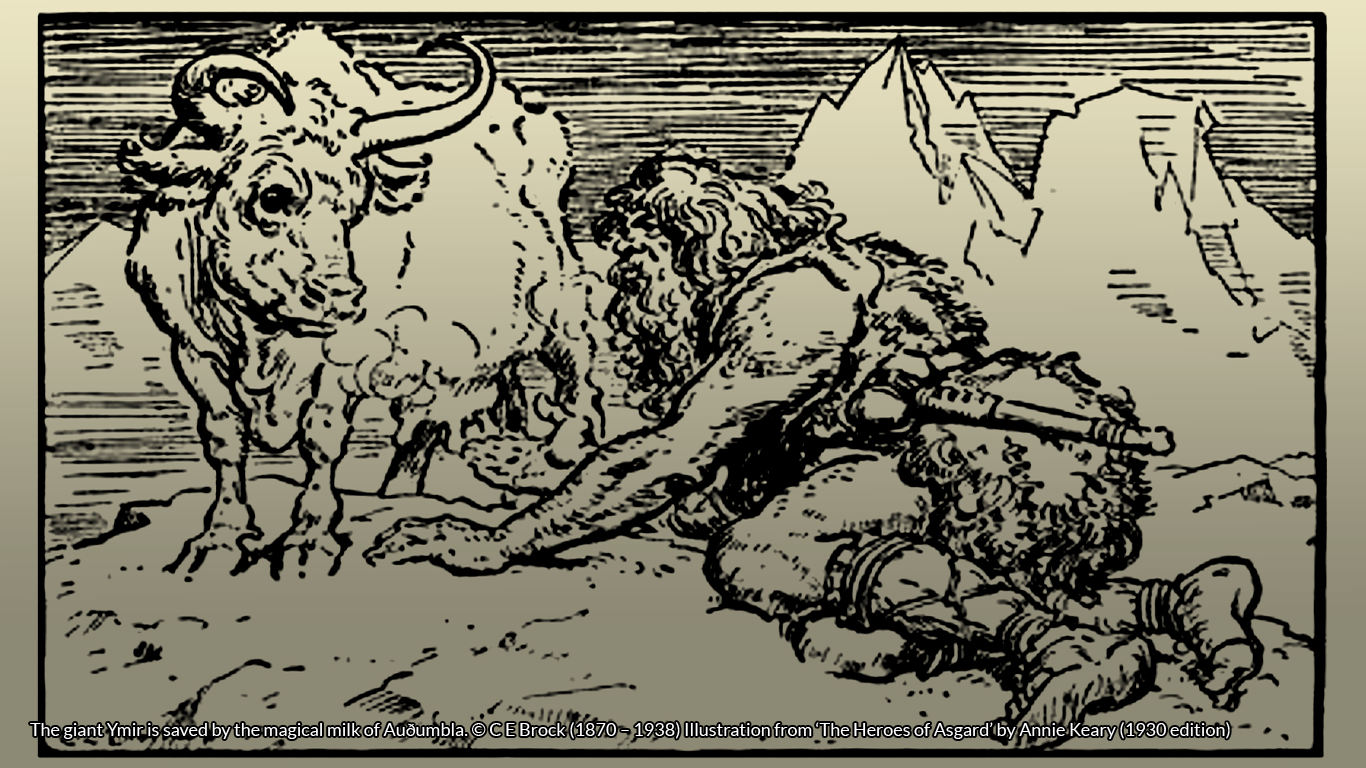 “There was once a bright-white milch-cow which travelled round the world, giving milk enough for all comers. Whoever drank of her milk immediately became wise, and was healed of whatsoever disease he had. She left calves behind her in every place, and from her all the milch-cows in the world are descended.”

Not so long ago, I was invited to give a talk about Shropshire Folklore. My research led me to a Bronze Age megalithic circle known as Mitchell’s Fold, located on Stapeley Hill near Priest Weston, in the Welsh Marches.

A long, long time ago, the people of Priest Weston suffered a terrible drought. Crops failed, livestock was dying, and the people were starving. A local witch claimed that she could end the drought with her spells. She asked the people to pay her in bread and cheese, which were in scarce supply and their only dwindling source of sustenance. They began giving their food to the witch, which she either ate herself or sold back to the folk. As the wicked witch grew fat, the drought continued unabated…

…until one morning, a starving shepherd out searching for the last of his sheep on Stapeley Hill, saw a beautiful woman appear out of the dawn mist. She was dressed all in green and leading a giant, bright-white cow. The ethereal lady told the shepherd that the cow would fill any pail, no matter the size, with milk. She instructed that only one bucket per home could be filled each day and each bucket must then be carried away, unaided, by the person who had brought it up the hill. The fairy maiden then disappeared with the morning mist.

The cow was indeed able to provide a seemingly limitless supply of lovely, creamy milk, one pail at a time. Of course, the people of Priest Weston stopped paying the ‘witch’ for spells that did not work and she became angry with the cow for ending the hardship she had profited from. Late one night, while everyone slept, the ‘witch’ took her oldest bucket, all full of holes, and sat down to milk the cow.  She milked and milked, through the night, until first light. The milk gushed into the bucket but ran away through the holes, so it never filled. As the last milk was drained, the cow was no longer a beautiful, bright white. Instead, her hide had become a dun brown, clinging to the curves of her famished ribs. In great distress, the maddened Dun Cow ran far away, over the hills.

Soon after, the fairy maiden returned to take her magic cow home. When she learned of the dastardly deed and the fate of her cow, she cursed the witch, turning her to stone. She then ordered the villagers to build a stone circle around the petrified body of the witch, to prevent her spirit from working mischief from beyond or leaving the place to haunt them. Luckily, the people of Priest Weston were wise and had made butter and cheese from the milk, which lasted them until the long drought was over.

Today, the stone circle is known as Mitchell’s Fold. Some say the witch was called Mitchell; some say it was the shepherd’s name. Others have postulated that the name Mitchell began as ‘mickle,’ meaning ‘much, bountiful, plenty.’  It has also been known as Midge’s Fold and Madge’s Fold, and references to ‘The Milking Fold’ and ‘Medgley’s Fold’ are recorded as early as 1752. In one version of the tale, it is not the witch but the cow that petrifies as its milk runs dry, and the circle is built as its monument. Whilst researching this folktale, I discovered that this was not the end of the story but perhaps the first chapter in an epic tale that resounds from the North of England, down to East Anglia, and right across to Wales. This was ‘The Dun Cow issue zero’ – her ‘origin story!’

The folk of Grimsargh, near Preston in Lancashire, tell the tale of a gigantic Dun Cow that wandered into their village during a time of terrible famine. It seemed to give limitless milk, though the townsfolk were prudent and all agreed to fill just one bucket per home per day. The great cow sustained the town in this way until an old woman took the bottom from a bucket and replaced it with a sieve, placing it inside another bucket. She sat and milked the cow into her double bucket contraption. The milk flowed through the sieve-based bucket to fill the outer vessel, which she continually replaced. Probably intending to sell the surplus milk further afield, her greed drove her to milk the cow until it died of exhaustion.

The parallels in these two stories may be explained by the confusion of similar sounding place names, Priest Weston and Preston. It is said that the magic cow was buried on a hill in Preston, known to this day as ‘Cow Hill.’ There is reference to an amateur archaeological dig on the site in the nineteenth century, when it is said that huge bones were uncovered, later presumed to be fossils. So, if these were not the bones of the Dun Cow, perhaps her adventures continued?

There are stories from Warwickshire tradition of a ‘Terrible Dun Cow’ that rampaged through the land, causing havoc and stampeding other herds of cattle. In some of these tales it is told that this giant, demonic cow had been driven mad by being over-milked by a witch. The path of this ‘rampage’ can be tracked by the proliferation of old inns named ‘The Dun Cow’ (try a google search for ‘Dun Cow Pub’).

Perhaps she was on her way down to Bristol, where there is a folktale that a gigantic ‘blessed cow’ saved the city from starvation by providing enough milk to see the entire population through a time of drought and famine. The greedy ‘witch’ is missing from this version, and here the Dun Cow is tended and revered until the end of her days. If you go into Bristol’s St. Mary Redcliffe Church, you will find displayed inside the North Porch a huge rib bone. Some local stories claim it to be the rib of this bovine saviour. It is, in fact, the bone of a whale, thought to have been brought back from John Cabot’s 1497 voyage of discovery to Newfoundland.

It has been suggested that the origins of such stories featuring great, life-sustaining cattle were perhaps beached whales (whale meat is said to taste like beef), though they are more likely to stem from a ‘race memory’ of pre-Ice-Age macrofauna, including the great aurochs. Aurochs are an extinct breed of great cattle, revered by early civilisations around the world since the days of cave art. They were worshipped by the Minoans at Knossos in Crete, where young men would leap over charging bull-aurochs as a rite of passage, and from there we have the myth of the Minotaur. Across Asia, sacred cows are still worshipped, and African tribes living in the arid, drought-prone Masai Mara are sustained by their beloved cattle.

Giant aurochs feature prominently in many creation myths. The Egyptian goddess Hathor, often represented in cow-form herself, created the Milky Way by milking a giant cow across the sky. The giant Ymir, the first living being of Norse mythology, was sustained by the copious milk of Auðumbla, a giant cow that spontaneously grew from a melting glacier.

The quote I opened this article with may well have been referring to the aurochs. I found it in A Sheaf of Gleanings, a book edited by Charlotte Sophia Burne in 1883, from the folklore-related collection of Georgina F. Jackson. It is translated from an old Welsh manuscript and so leads us nicely on to the final chapter of the Dun Cow epic. For if the Bristol bone is that of a whale and not of our magic cow, then what fate may finally have befallen her? (Or… How now, brown cow?)

The Dun Cow did not die. Not in Priest Weston, nor Preston. Nor later, in Bristol. A fairy tale from West Wales provides a satisfying finale to the story of the bright-white fairy cow who became the Dun Cow due to human avarice… and I am pleased to be able to end on a happy note.

Perhaps after her ‘world tour,’ leaving ‘calves behind her in every place,’ she made her leisurely way through Wales, where similar stories of magic cows and their timely appearance during famine endure, from the Vale of Towy to Snowdonia.

In this tale, which reaches its denouement at Aberdyfi, the local butcher comes to slaughter the giant Dun Cow when the drought is over. Well, there’s gratitude for ya! As he raises his knife, he is paralysed on the spot, unable to move until a strange maiden, dressed all in green, appears out of the mountain mist. The touch of this maiden’s hand transforms the tired, old Dun Cow into a noble, bright-white cow. The butcher’s boy, enchanted by the maiden’s otherworldly beauty, is compelled to follow as she leads the magic cow away. He watches them disappear into the waters of the local lake, returning to the Realm of the Fair Ones.

This article was adapted from part of the talk I gave to the Shropshire Council Wild Team in 2016 – http://www.shropshiresgreatoutdoors.co.uk/ – and I would like to thank Simon Brown, Helen Beresford and all the volunteers for lively discussion, and Stephanie Hayes for sourcing the pictures. Also, a big thanks to Rhys Williams, Research Assistant at St Mary Redcliffe Church in Bristol, for invaluable help.