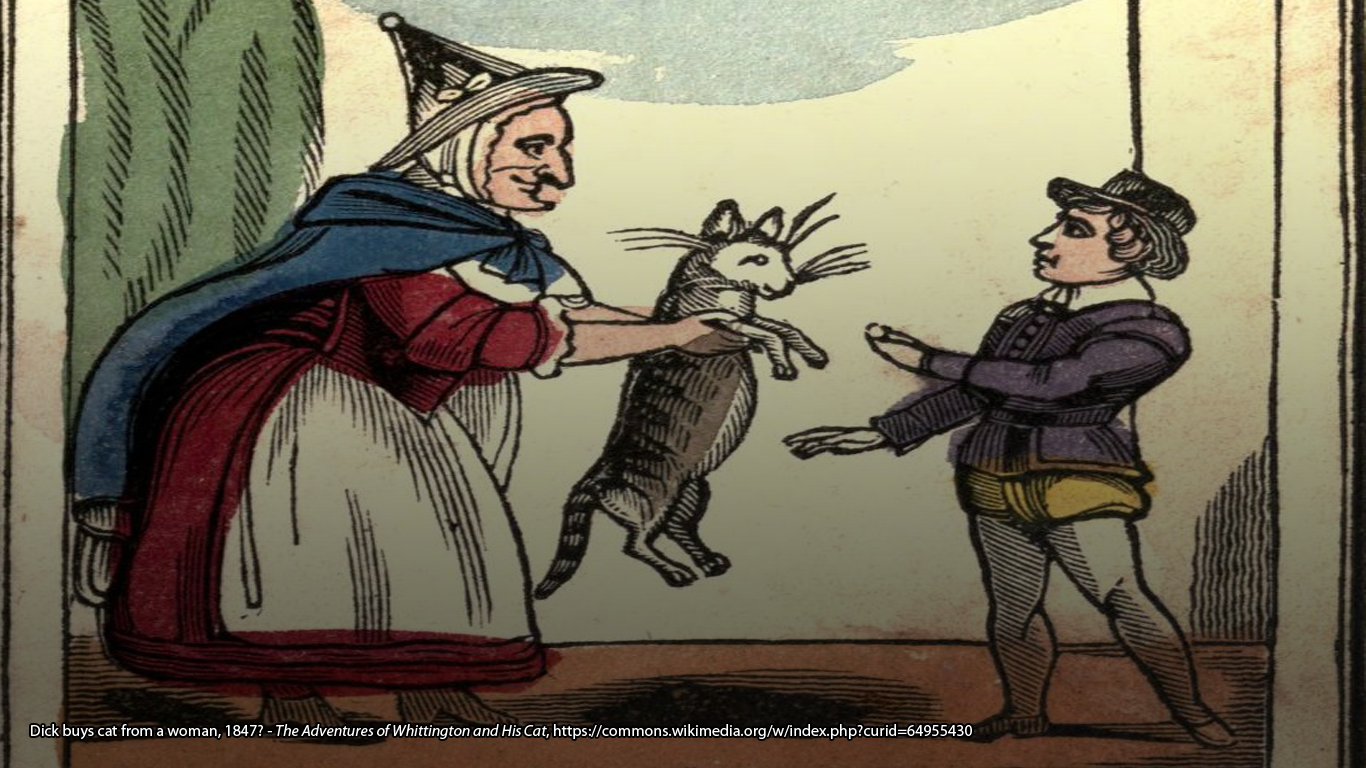 The popular image of Dick Whittington is a spritely young girl wearing tights and a short leather tunic, carrying a stick and sack over one shoulder, closely followed by someone wearing face paint to make them resemble a bipedal cat in thigh-high leather boots. That’s the pantomime version. It comes as no surprise that the real historical figure of Richard Whittington was, almost certainly, unlike this…

It seems fairly logical to begin our search for the real Dick Whittington at Whittington Castle in Shropshire, which local lore claims to have been his home. During a series of recent research visits, I found the location to be rife with pop-history, fertile with folklore and tall tales. Was it really home to the family of Sir Richard Whittington, the famous merchant who went on to be elected Lord Mayor of London on four occasions and became richer than the King, and whose legacy is still tangible in the capital?

First, let’s consider the story of Dick Whittington, of Whittington. He spent his childhood growing up at the castle and once visited the Holy Well of St. Oswald in nearby Oswestry. This is significant because the well has its own rich folklore. It is said that when Oswald, a Christian King of Northumbria, was killed fighting Penda, Anglo-Saxon King of Mercia, in the battle of Maserfield during the mid-7th century, his body was dismembered. A raven swooped down and took his right arm from the battlefield and hung it high in an ash tree. This was then known as Oswald’s Tree and gave the town its name, Oswestry. Where blood fell from the severed limb, a spring appeared. Oswald was venerated as a saint and both the tree and the spring were attributed with miraculous powers including healing and granting prophetic visions.

Following his visit to this spring, young Dick had a vivid dream of a faraway town where the streets were paved with gold. The dream inspired him to seek this fabulous place. So, he packed up a bundle of provisions, and some goods to trade, and set out from Whittington Castle on foot. He had never ventured far from home, and it wasn’t long before he was feeling homesick for his friends and family.

The castle cat, for which he had a particular fondness, had been following him and as he was bedding down on his first night away, the cat finally caught up with him. Dick knew the cat would continue to follow him and he should really take it back to the castle, but he was so glad of the familiar company that he decided to travel onwards with his feline friend. The fat castle cat was not used to walking such distances and, after a few days, became lame with sore paws. Dick Whittington cut four squares from his leather tunic and made little booties to protect its soft paws. Hence the legend of ‘Cat-in-Jerkin-Socks’ was born… or is that ‘Puss-in-Boots’?

Eventually they arrived in London. It wasn’t paved in gold, and as an ‘innocent’ merchant from the countryside, he was ‘fleeced’ by the unscrupulous London traders. As he was leaving London, dejected and penniless, it is said that he heard church bells ringing and they seemed to be singing his name and calling him back. So, with renewed determination, Dick returned to the city.

Versions of the story differ here as to how he began to build his fortune and what happened to his cat. In my favourite, he earns enough from shining shoes to pay for the cheapest bed in the dingiest, most rat-infested boarding house, where he then rents out the rodent-ridding services of the cat. The owner of the lodgings is so impressed that she buys the cat, and Dick then has enough to begin trading again. Having learnt from his mistakes the first time round, he soon earns enough to buy back his kitty friend.

Dick also manages to persuade several unscrupulous merchants to change their ways, convincing them to stop exploiting naive tradesman from the countryside and offer fair deals instead. In this way they begin to build a more reliable supply chain of desirable goods, such as fine woollens from Wales. Soon Dick has established the first code of fair trade, which makes London a better place to do business and eventually gains him enough respect to be elected Lord Mayor. So, Dick and Puss live happily ever after!

Obviously some of this may not be historical fact, but there are certainly some threads of truth in there. Sir Richard Whittington was definitely real. We know he died in 1423 and was buried in the church of St Michael Paternoster Royal, though his tomb was lost in the Great Fire of 1666. At the time of his death, he was very wealthy — said to be richer than the King — and was widely admired. In 1393, he was Sheriff of London and had been elected as an Alderman by the city’s councillors.

His first appointment as Mayor was in 1397, by the royal command of Richard II. Within days, Whittington bought back the liberty of London from the King, whose grip on power was slipping, and was then lawfully elected by the people. When Richard II was deposed in 1399, it was another of Whittington’s wealthy clients, Henry Bolingbroke who succeeded him, as King Henry IV.

Sir Richard Whittington was re-elected Mayor of London in 1406, and by 1407 he was also Mayor of Calais! He was helping to manage the King’s finances, even loaning him large sums, and continued in this capacity for his successor Henry V, for whom he supervised completion of Westminster Abbey. By 1416, he was a Member of Parliament and was also serving as an occasional Judge. He was elected as Lord Mayor of London again in 1419.

Dick was also known as a philanthropist and a humanitarian activist. He did much to improve working conditions, and passed laws protecting children from undertaking dangerous work. He had drinking fountains installed to provide clean water, improved the drainage and sewage systems, founded a ward for unmarried mothers at St Thomas’ Hospital, and restored the Guildhall. Either during his life, or by bequeathments, he also financed the rebuilding of several establishments including St Bartholomew’s Hospital and Newgate Prison, to which he added quarters for the Sheriffs and Recorder, which would eventually develop into what we know as the Old Bailey. He also built an alms house and hospital for the poor, retired, and widowed which still operate as charitable retirement homes, although no longer on their original sites. The charity he established, as part of the Mercers Company, also continues to make annual donations to help the underprivileged.

There is not as much known about his birth, because he came from comparatively humble beginnings. It is thought he was born sometime in the 1350s, probably in Gloucestershire, though his Grandfather was Sir William de Whittington, of Staffordshire. Apart from the folktale told above, there doesn’t appear to be a lot to link him with Whittington Castle apart from his wife, Alice…

Alice was the daughter of Sir Ivo FitzWarin, of Wantage, Oxfordsire. Whittington Castle was the seat of the FitzWarin family from the around 1200, when it had passed to Sir Fulk FitzWarin, until the mid-15th century. So, although I can find no verified accounts of Richard Whittington ever residing at Whittington Castle, this conglomeration of coincidence supports rather than rules out the possibility that he may have at least visited his wife’s relatives who were living there. Local tradition holds that he did visit the FitzWarin family there, but stayed at a nearby cottage, and it was from that cottage that he set off on his first journey to London.

But what of the cat? Richard Whittington had become London’s local hero and after his death, there was demand for copies of his portrait. Sometime in the mid-17th century, print seller Peter Stent was distributing a popular image of Dick Whittington holding a somewhat mutant cat. For source material, the engraver had used an existing portrait of Whittington in which he had been holding a skull, contemplating it as a memento mori. There are two explanations of how the skull morphed into the cat. One is that the story of Dick Whittington and his cat was already known and so to meet public expectations the image was adjusted. Or, the print seller simply thought that a skull was a bit too morbid and a cat would be cheerier and sell better.

The pantomime association of Dick Whittington with Puss-in-Boots is probably a contrivance that confuses the later Italian folktale, ‘Il Gatto Con Gli Stivali’, literally ‘the cat with the boots’, written down by Gianfrancesco Straparola in the mid-16th century. Nevertheless, I prefer to think of our Dick, from Whittington Castle, cutting up his own jerkin and affectionately caring for his cat’s sore paws on their fateful journey to a fabulous city seen only in dreams…