Sir Thomas Vaughan of Hergest was a Herefordshire landowner who fought for the Yorkists in the Wars of the Roses.  On 26th July in 1469 he was taken prisoner in the battle at Danesmore in Northamptonshire, near Edgecote Moor, when the Earl of Warwick’s forces  defeated those of King Edward IV.  After the battle Sir Thomas was beheaded at Banbury, aged 69 years.  Tradition says he was an evil man, although the lack of documentary evidence to back this up suggests that the the name ‘Black Vaughan’ may be a comment on his black hair, rather than his demeanour.  Or, as with similar traditions, applied only after his death when certain ‘events’ began to happen. 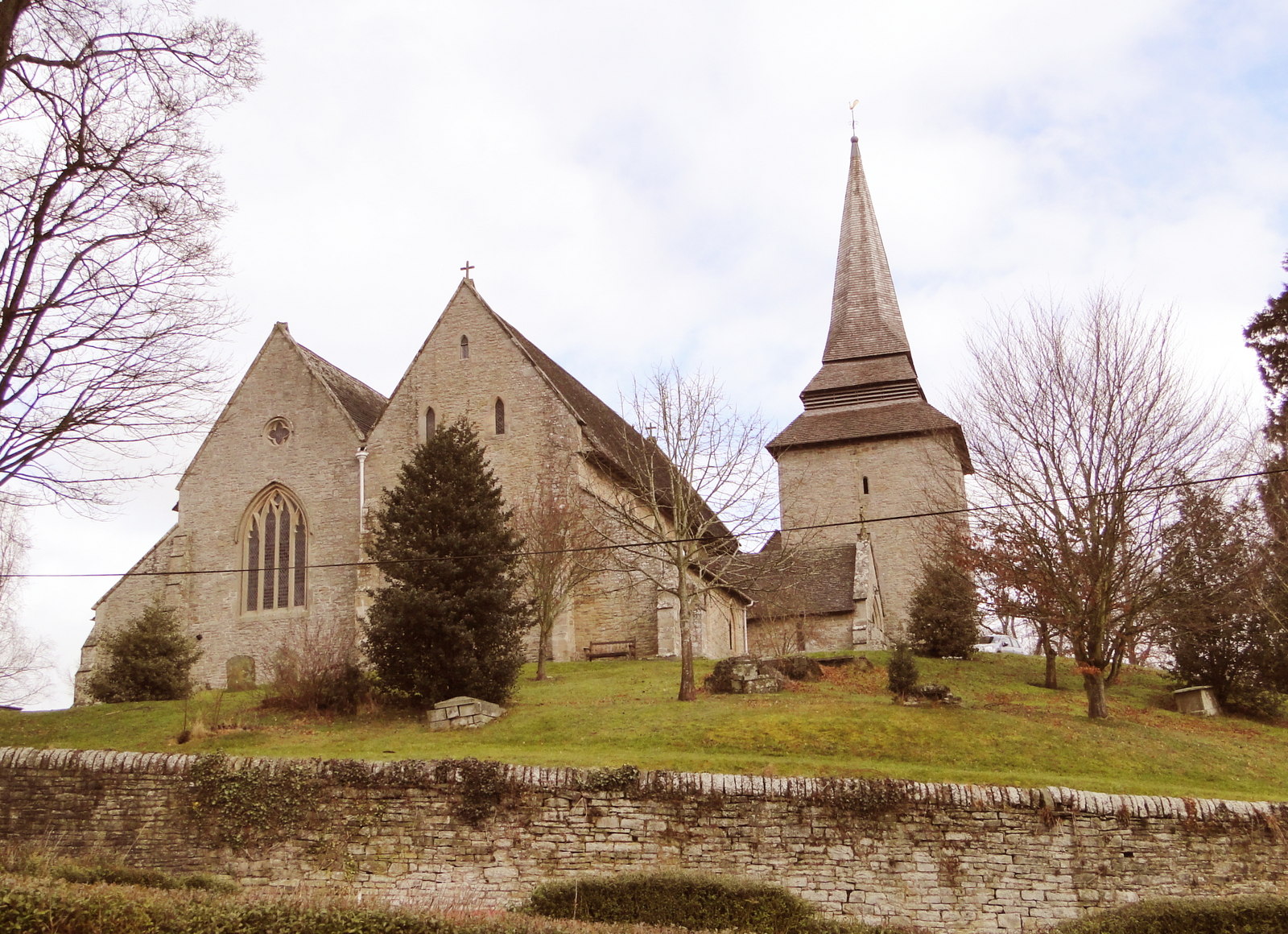 According to local legend, after his headless body was brought back and buried in St Mary’s Church at Kington, on the border between Herefordshire and Wales, Black Vaughan proved to be a restless spirit who wreaked havoc amongst the townsfolk. Legend has him appearing in many forms, such as a fly which tormented horses, causing them to bolt; a large black dog; a black bull that entered the church and frightened the congregation.  Sir Thomas in one form or another roamed the nearby countryside, terrifying women by leaping onto their coaches as they rode home. He is said to have left physical impressions in the ground after his visitations in the form of bare patches in the grass.

“Black Vaughan proved to be a restless spirit

who wreaked havoc amongst the townsfolk.”

Eventually, the townsfolk at their wits end to solve this local nuisance, twelve local clergymen were summoned to lay the spirit and give the inhabitants of Kington some peace.  Thus a holy ceremony was held during which the spirit of Black Vaughan was shrunk and sealed into a snuff box and then buried beneath a large stone in the bottom of Hergest Pool.

Like all folklore, the amount of fact contained in the story is difficult to assess, but the power of the Vaughan legend lives on, and a visitor to the church in recent times is said to have witnessed a bull-like apparition form in the air. 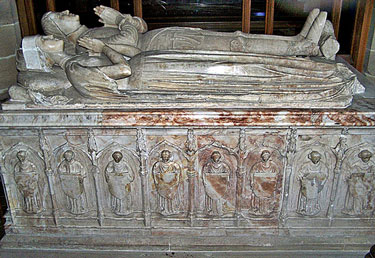 The wife of Sir Thomas Vaughan was Ellen Gethin, daughter of Cadwgan ap Dafydd, and so with close Welsh connections.  Lady Ellen was subject to her own folklore, earning for herself the name Ellen the Terrible.  It is said that, dressed as a man, she fired an arrow through the heart of her cousin during a local archery meeting, in retribution for her cousin’s murder of her brother.  I have always had a sneaking admiration for Terrible Ellen.

The magnificent alabaster and marble tomb of Sir Thomas and Lady Ellen Vaughan can be seen today in the side chapel, immediately to your right as you enter the church at Kington.   The tomb is surrounded by figures of saints and angels on all four sides and features elaborate effigies of husband and wife.  The effigies are highly detailed although unfortunately there has been some damage to Lady Ellen’s feet and to the dog lying at the feet of Thomas Vaughan.

“The dog is said to have haunted generations of the Vaughan family ever since,

appearing before them to signify imminent death.”

The Vaughan’s legacy continues with the story of the black dog of Hergest Court, a companion to Sir Thomas Vaughan, which is believed to have had its own room at the top of the house.  The dog is said to have haunted generations of the Vaughan family ever since, appearing before them to signify imminent death.  It is widely thought that Sir Arthur Conan Doyle based his Sherlock Holmes story The Hound of the Baskervilles on the tales of the Hergest black dog.  Since Sir Arthur is known to have stayed at Hergest Court and presumably heard of the nearby Baskerville family from Eardisley, then maybe the story is based on fact.   This is much local speculation but there is no proof. 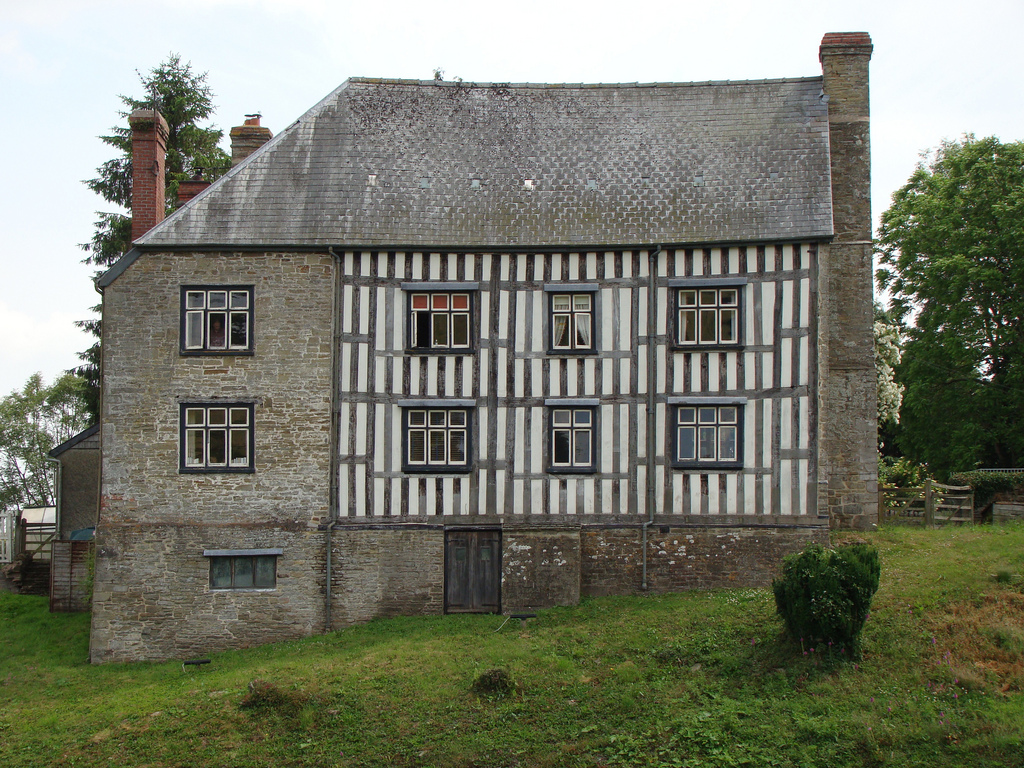 Hergest Court is an impressive 15th century manor house, now much changed from the original, a mile or two outside Kington.  It is privately owned and so not open to the public.

This is a wild and isolated area, and definitely worth a visit.  Whether you will come across Black Vaughan and Terrible Ellen, or even the Hergest black dog, is quite another matter.