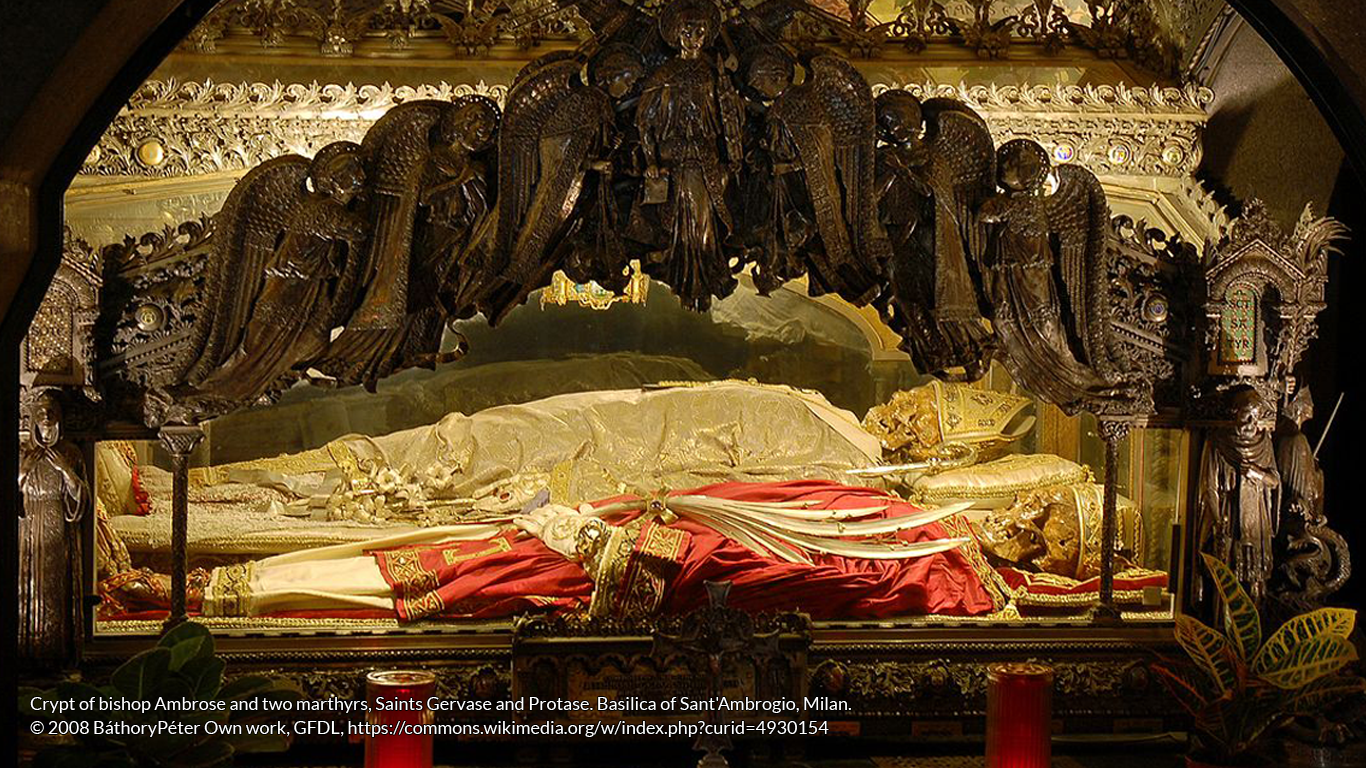 Remember last time, when we talked about a church decorated with the remains of the departed? We’re back with your favourite expert for some Milanese folklore from the streets of Milan.

If you ever happen to come to Milan and take the Green line, there’s a stop called S. Ambrogio. Head up above the subway line and you’ll find a basilica – a particular kind of Christian church – dedicated to the eponymous saint, better known in the English world as Saint Ambrose.

The church, consecrated in 379 (not a typo, it is about 1640 years old) and almost destroyed in the Allied bombings of WW2, is a shining example of very early Christian imagery and a treasure trove of religious and cultural references with its engravings and inscriptions. But this isn’t a history website, so let me tell you about the legend that surrounds it.

On the left of the basilica’s entrance there’s a single column standing in the middle of a small piazza, in a completely different style than the rest of the buildings in the area. That column is known by the Milanese as the Devil’s Column (Colonna del Diavolo), and is part of one of Milan’s oldest and most beloved legends.

The story goes, Sant’Ambrogio (who was not yet saint at the time, but just a simple bishop) was out walking in the garden of the basilica, when the Devil himself appeared. He and Ambrogio had been having issues for a while, you see, what with all the temptations business and the saint being in charge of an entire city in the process of establishing his church.

Ambrogio was kind of a very big deal at the time – think a mixture of holy man and incredibly skilful politician – so the Devil spent a lot of time trying to corrupt him, which annoyed the bishop to no end. And so Ambrogio, being a practical problem solver, kicked the Devil in the butt and slammed him into the column, where his horns got stuck creating the holes you can see in the picture below.

Ah, the poetry of Italian folklore.

They say the Devil tried to set himself free for the entire night, giving up at dawn and disappearing in a puff of sulphur-smelling smoke. And so, since that day, on the night of Easter’s eve, you can see him on a carriage passing in front of the basilica, dragging the souls of sinners down to Hell. Apparently, the legend is famous enough to attract a small amount of Satanist visitors once holidays come around.

“… since that day, on the night of Easter’s eve, you can see him on a carriage passing in front of the basilica, dragging the souls of sinners down to Hell.”

And there is the story, but as skeptical as one may be, there’s still one thing that can’t be denied by logic: there’s a column in front of the basilica that has nothing to do with the rest of the building. Where did it come from? Why did it end up there? And more importantly, how did it get this peculiar nickname and story? While I do have found some sources on it, keep in mind that details can get more than a little blurry across the ages.

So take this with a grain of salt, as the saying goes. As folklore is something almost always passed down via word of mouth, it’s constantly evolving and changing throughout history – and while we can tell how the column came to be and how it ended up with its peculiar legend, almost everything in between is little more than speculation.

So, where did the Column come from? It’s not from the Middle Ages, first of all; it’s a Roman ruin, dating back to the second century AD. And while nobody knows much about it, we do know a thing or two about its original use.

In the (badly translated by yours truly) words of Galvano Fiamma, Milanese chronicler from the 14th century,

When the King of the Romans wishes to receive the crown of the Italic Kingdom in the Basilica Ambrosiana, the emperor shall first head to the marble column standing in the Basilica Ambrosiana itself, and one of the counts of Angera shall bring forth to the Emperor a missal. The Emperor shall swear his obedience to the Pope and the Roman Church in temporal and spiritual matters … Then the Archbishop or the Abbot of Sant’Ambrogio shall crown him with the iron crown as the King of Italy. Once that is done, the Emperor shall wrap his arms around the straight marble column, to signify how straight justice shall be by him.

I think I handled that well, excluding that last sentence – think of it as the two different meanings of the word “right”.

So, the Column was originally part of a symbolic rite that signified a German Roman Emperor’s rejection of pagan religion to be able to be crowned King of Italy by the Church, and let me stop you right there: I know what you’re thinking, and you’re right. There is no way the Emperors were sincere in this, right?

That’s when the column started being associated with the Devil. People knew how empty and token that gesture was, and the column was renamed the Devil’s Column to reflect the hypocrisy of those powerful people at the top.

At least, it’s what most people think; that’s where the story gets fuzzier. I couldn’t find any information on how the column’s story shifted from its historical roots into folklore – and that actually makes a lot of sense. Folklore is oral, it’s tradition, and it’s constantly evolving; tracking down its evolution is often close to impossible. Any of you have any ideas? Let me know in the comments, or on Twitter with the hashtag #FolkloreThursday. For now, I’m back to squeezing every ounce of folklore I can from this city.