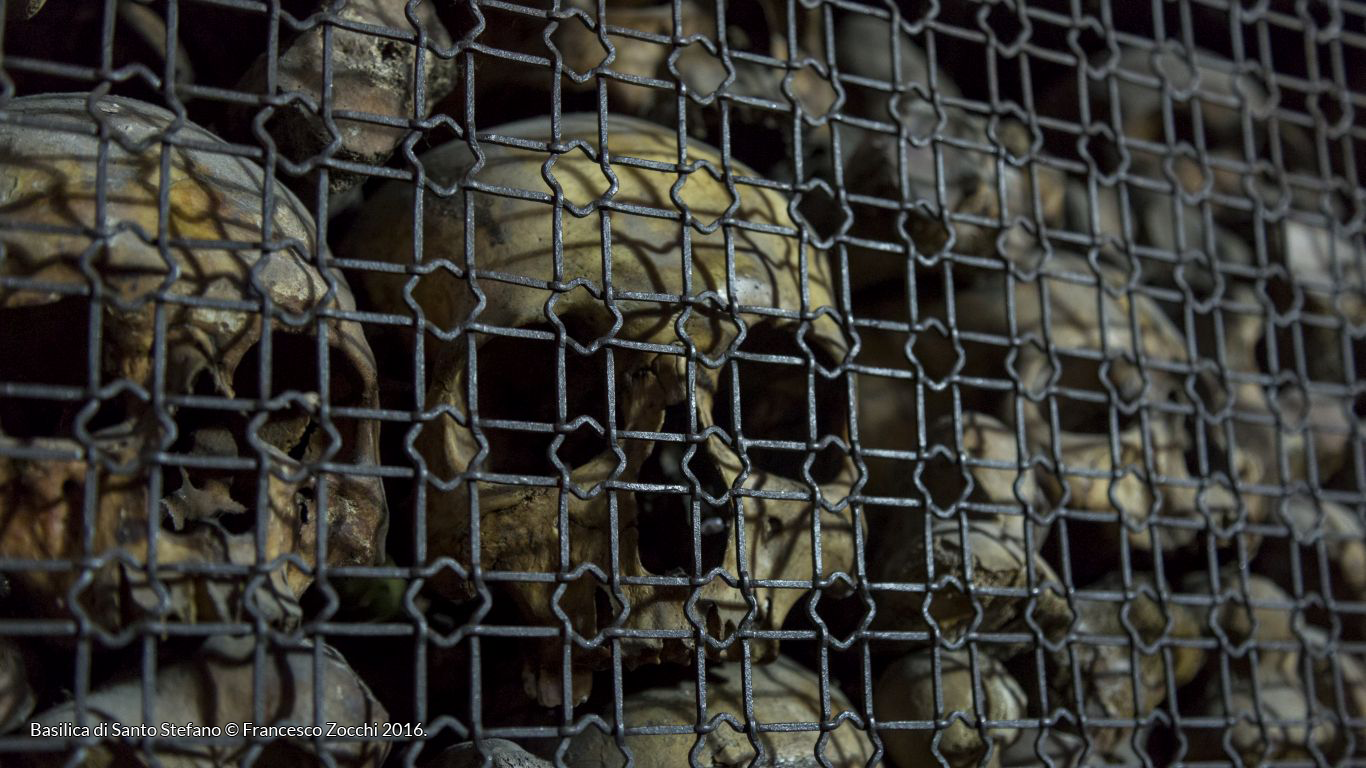 The most interesting parts of Milan are hidden in plain sight.

This city, once an ancient Celtic settlement conquered by Romans and now considered the fashion capital of Europe, isn’t the first thing that comes to mind when planning for your holidays in Italy. Flashier and more popular choices like Venice, Florence or Rome are the usual tourist magnets, with entire local economies built on foreign people loving our country. Which I’m completely fine with, because it leaves all the interesting stuff to me. 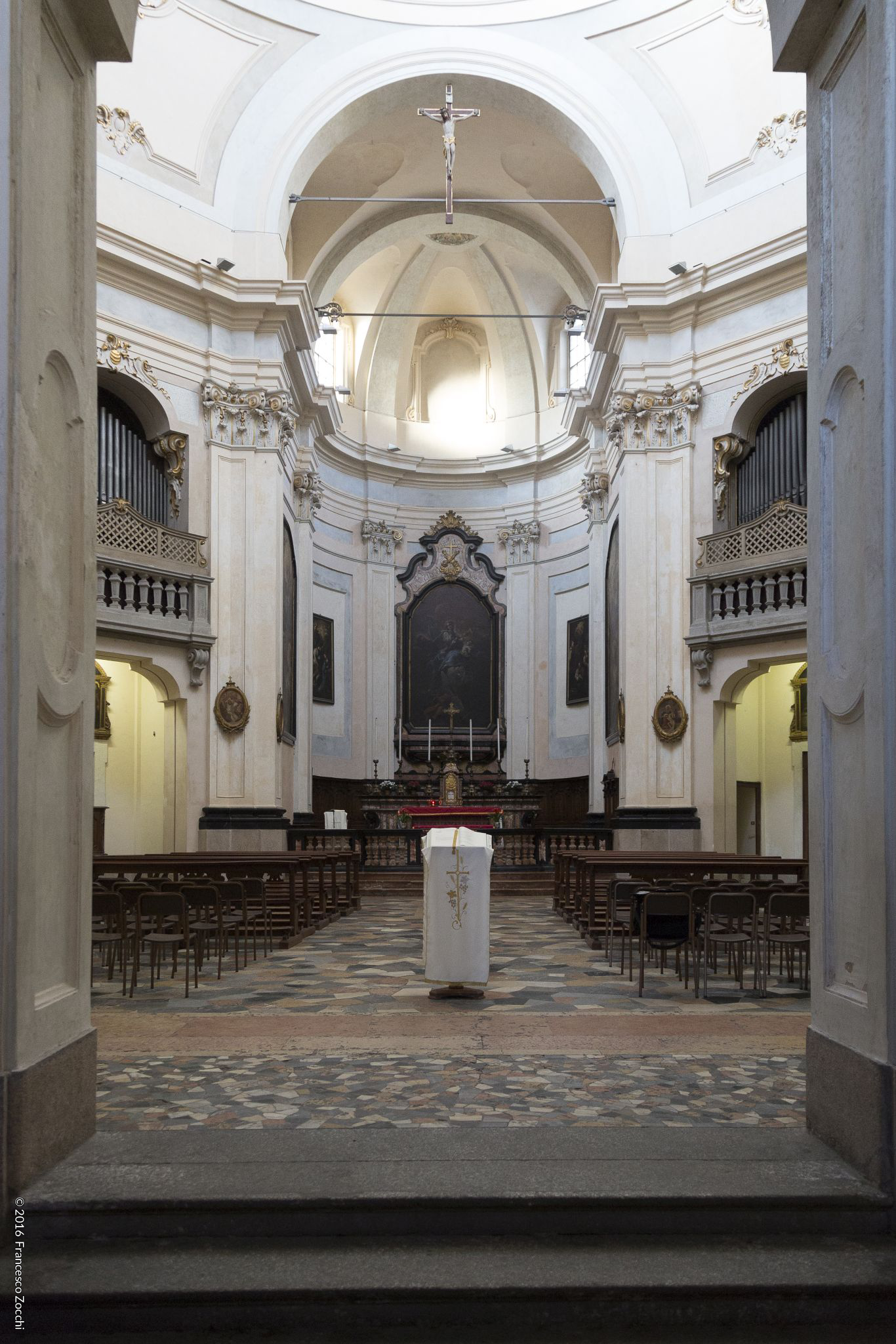 Milan’s main attraction is the Duomo, the magnificent Gothic cathedral standing in the very centre of the city. While I would never debate that (it is, after all, the fifth largest church in the world), if you’re willing to commit to a five-minute walk and some behind-the-scenes exploration you’d be able to move from Gothic to gothic horror. 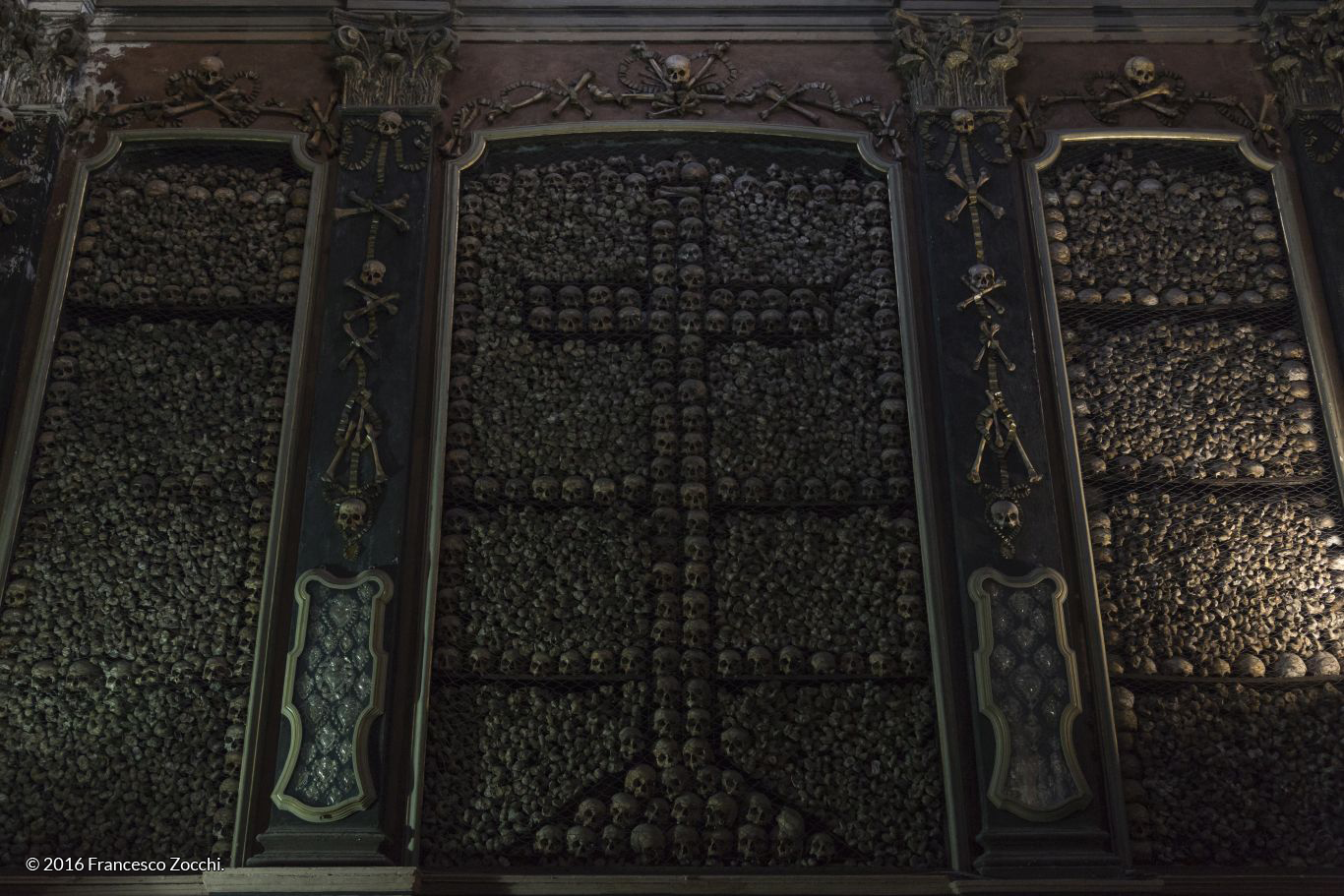 Walk down the right side of the Duomo, turn right at Piazza Fontana and you’ll soon find yourself in front of the imposing Basilica di Santo Stefano. As good-looking as that building is, the real attraction is in a less ornate church on your left, slightly hiding behind some trees. Walk in, turn right, take the left-hand door in the small chapel and go down a tight, almost claustrophobic corridor. You’ll find yourself in a room with an altar and endless skulls with empty eye sockets looking at you from the walls and ceiling. Welcome to the Ossuary. 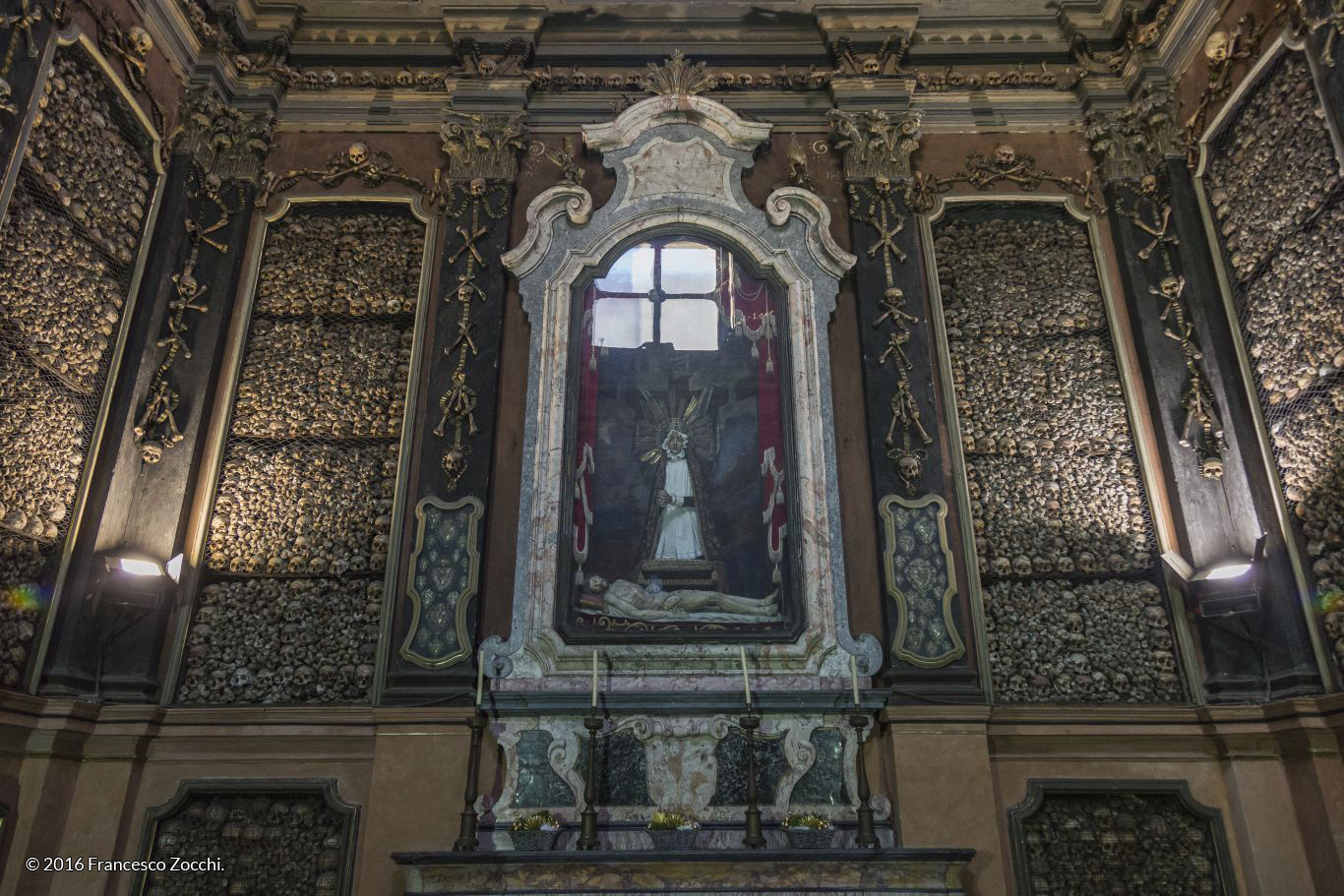 It’s a chilling place. It’s not a typical tourist attraction, and it’s not treated as such – the church itself is still in use, managed by Milan’s Sinhalese community in one of those multicultural oddities that seem to define the city. The place isn’t advertised much, and only one or two industrial lamps light up the chapel, casting eerie shadows on the walls. Anyone can walk in and take a look, or kneel in prayer if so they prefer. A small wooden box in a corner kindly asks visitors for donations. 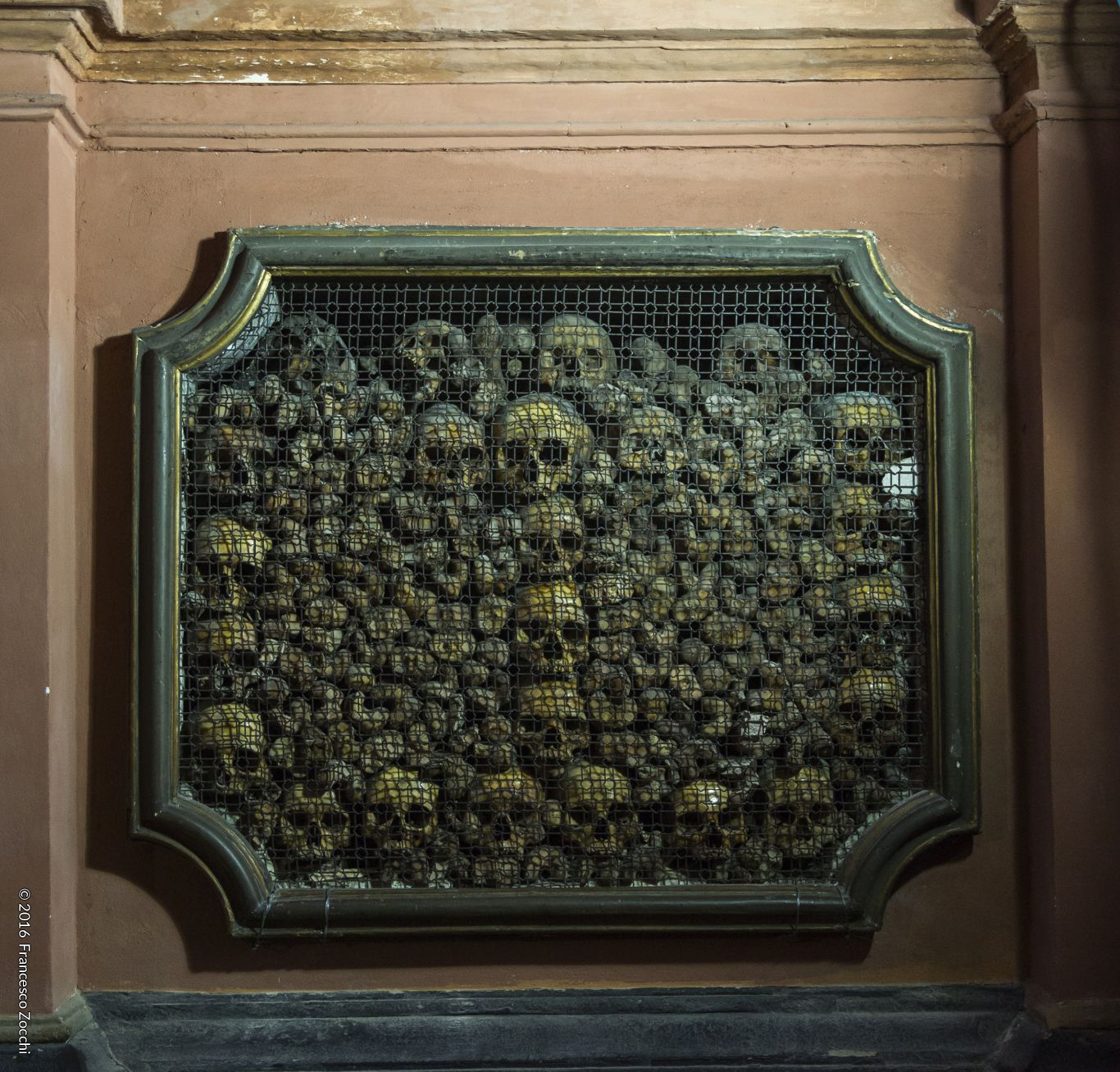 The story of the Ossuary has all the fascination of a classic horror movie. The church stands on the site of a middle ages hospital, built in 1127 by Italian nobleman Gotifredo da Bussero to host the lepers and plagued – and if you know anything about life in the High Middle Ages, you can easily imagine the kind of survival chance they had. By 1184, sources tell us that the hospital had been given a permit to build its own cemetery, and by 1210 even its own ossuary for the monks and priests taking care of the sick. 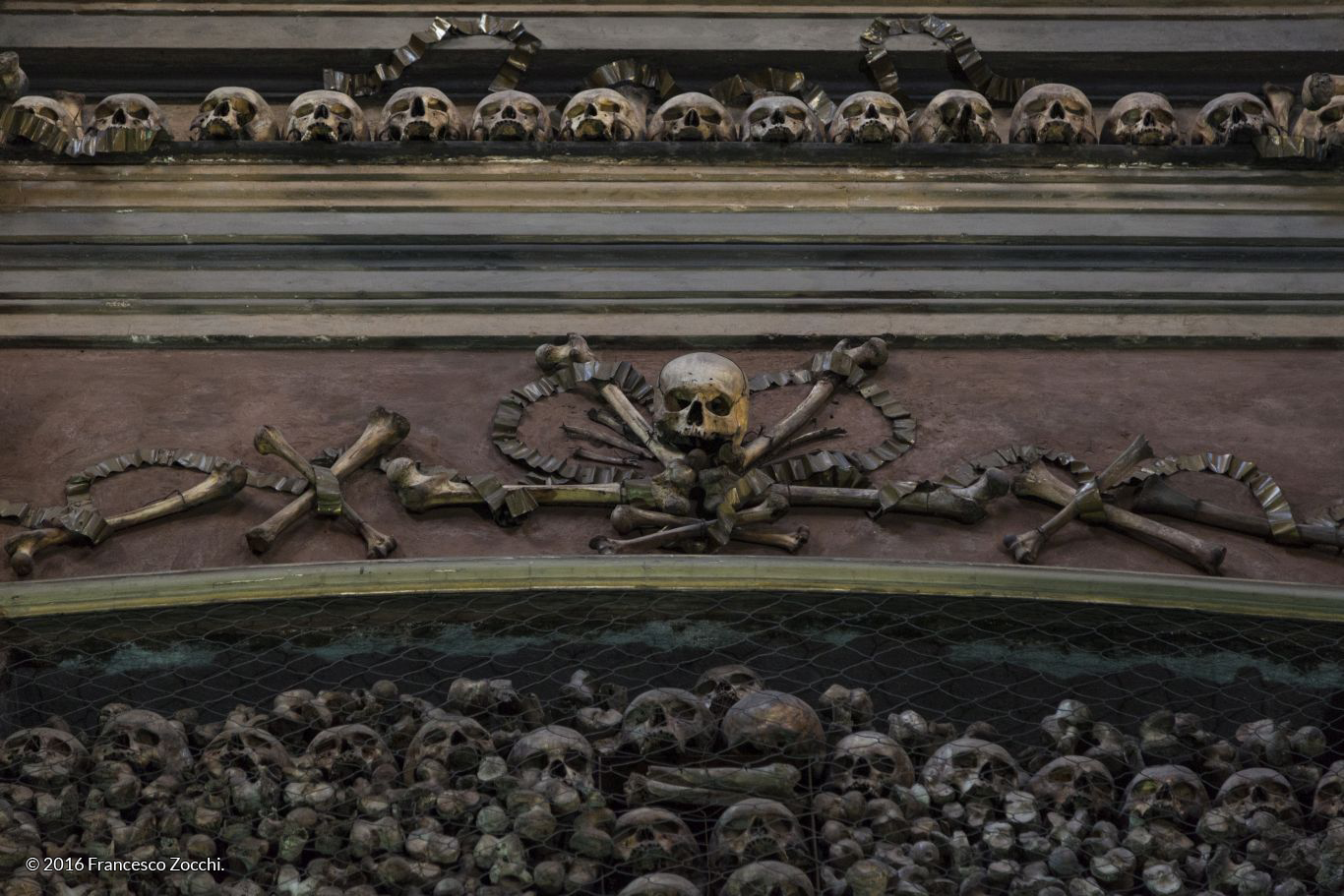 The Ossuary became renowned and somewhat loved by the milanesi, who took to calling it the House of Bones (casa degli ossi), and became the residence of the Confraternity of Disciplines (Confraternita dei Disciplini), a local organisation dedicated to nursing the ill and mortification of the flesh via flailing or other forms of self-inflicted torture. Walking in, the difference from the church’s atmosphere is palpable: while the main building is almost entirely white in colour, the Ossuary is black and red – you have the feeling you left the grace of God behind to enter a literal memento mori made stone. 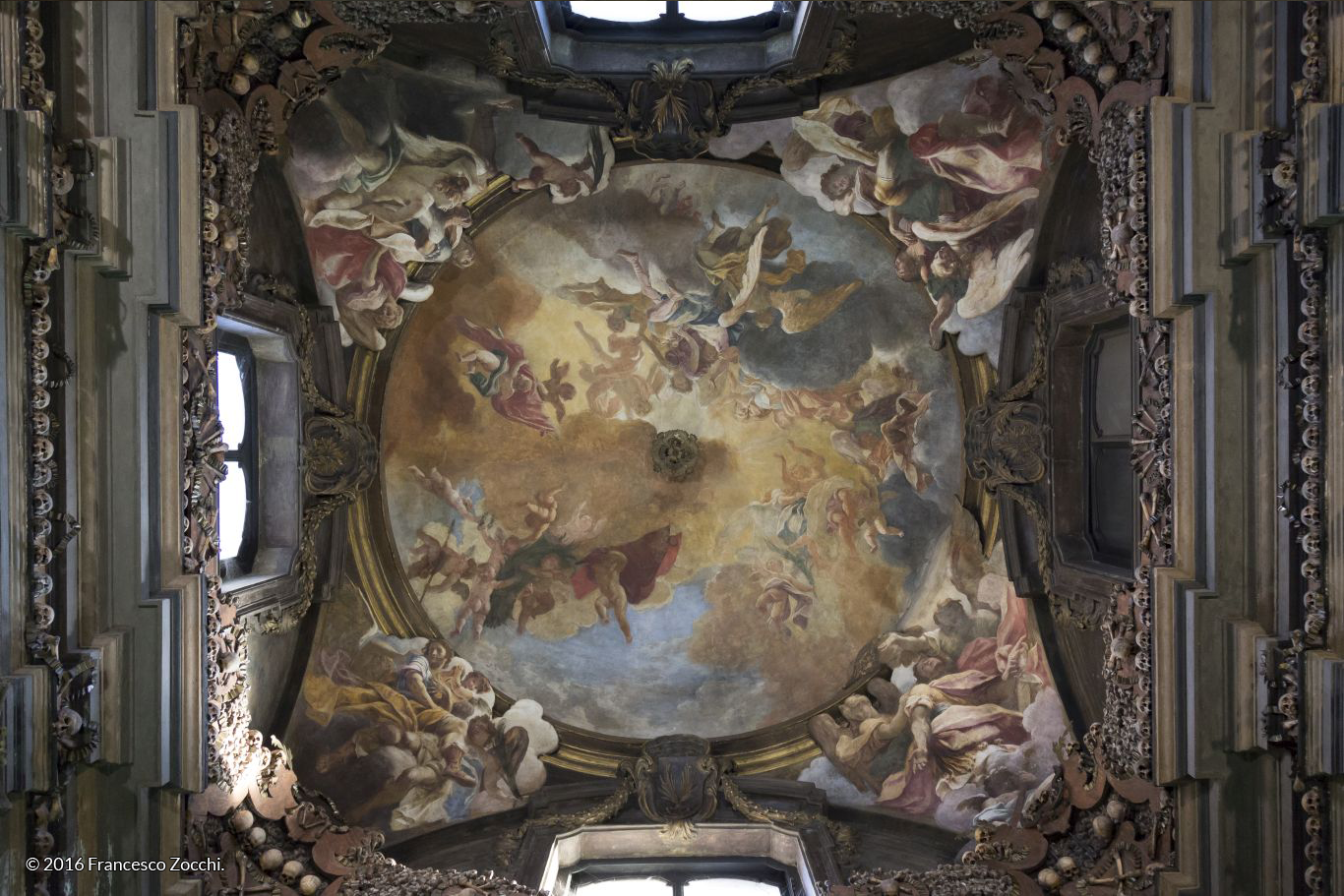 I’ve found it somewhat hard to pinpoint the exact moment when they decided to use human remains to re-decorate – the nickname and some sources seem to suggest relatively early on, but others attribute it to late Baroque painter Sebastiano Ricci, who also did the Triumph that looks on all the earthly remains from above, while the custodian that walked me through it at my request said it was a choice made by Spanish governors. Can any of our readers clear the riddle for me? I’ll offer you a pint if you ever travel by Milan. 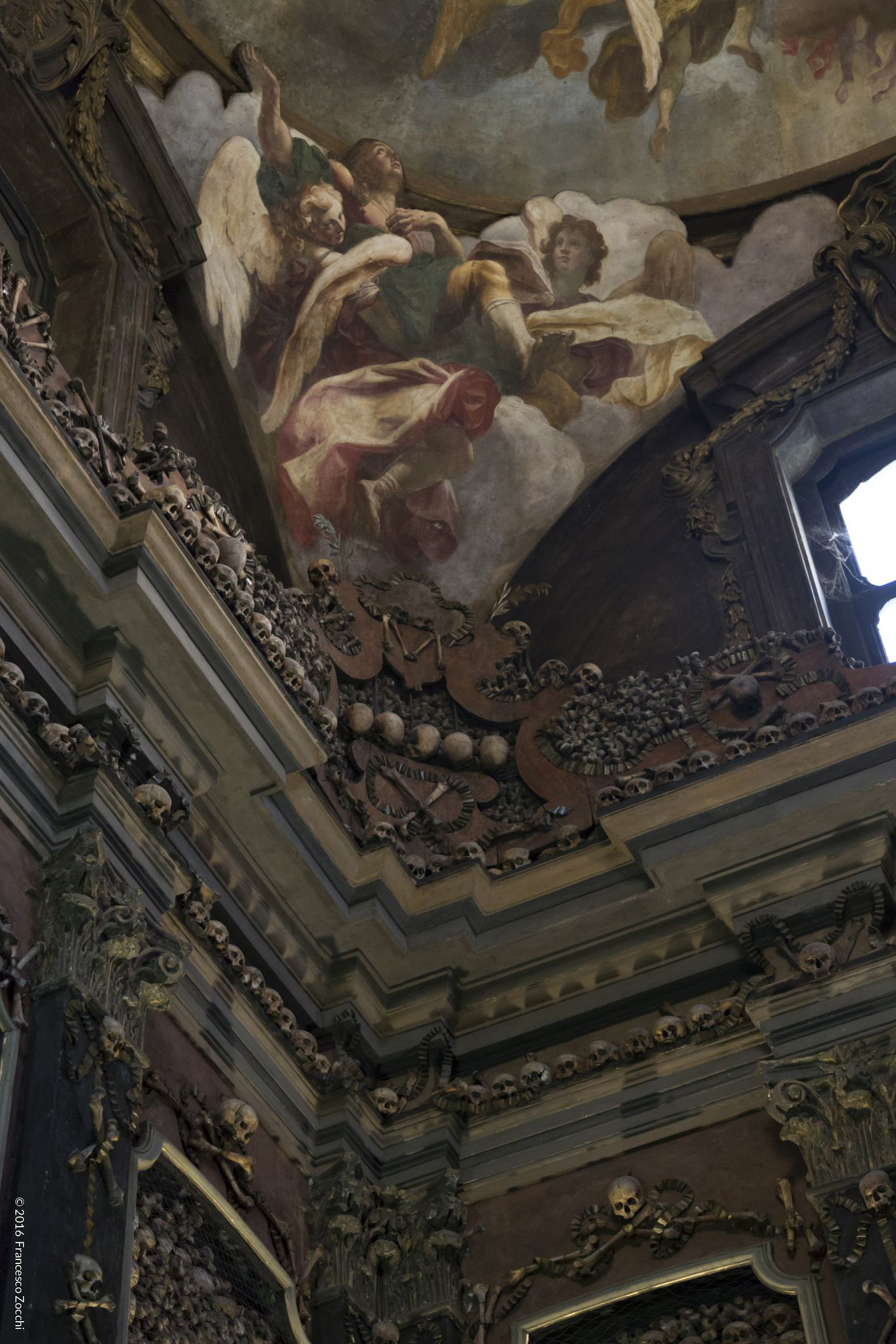 Still, it’s undeniably creepy. The chapel is much taller than a photo can convey and floor tiles show their age, uneven and worn out after centuries of pilgrims, priests and devotees. It’s also colder than the outside, even in February – there doesn’t seem to be any heating, and stone walls and bones make what would be a chilly room feel incredibly cold. There’s an altar dedicated to Nostra Signora di Soledad, our Lady of Solitude in a mixture of Italian and Spanish, and a display case above the (now sealed) main entrance with several separate skulls. The custodian informed me they were once the heads of corrupt Spanish officers. Now they remind people that it’s not a good idea to be a corrupt Spanish officer, and I think I’ll stick with that advice. 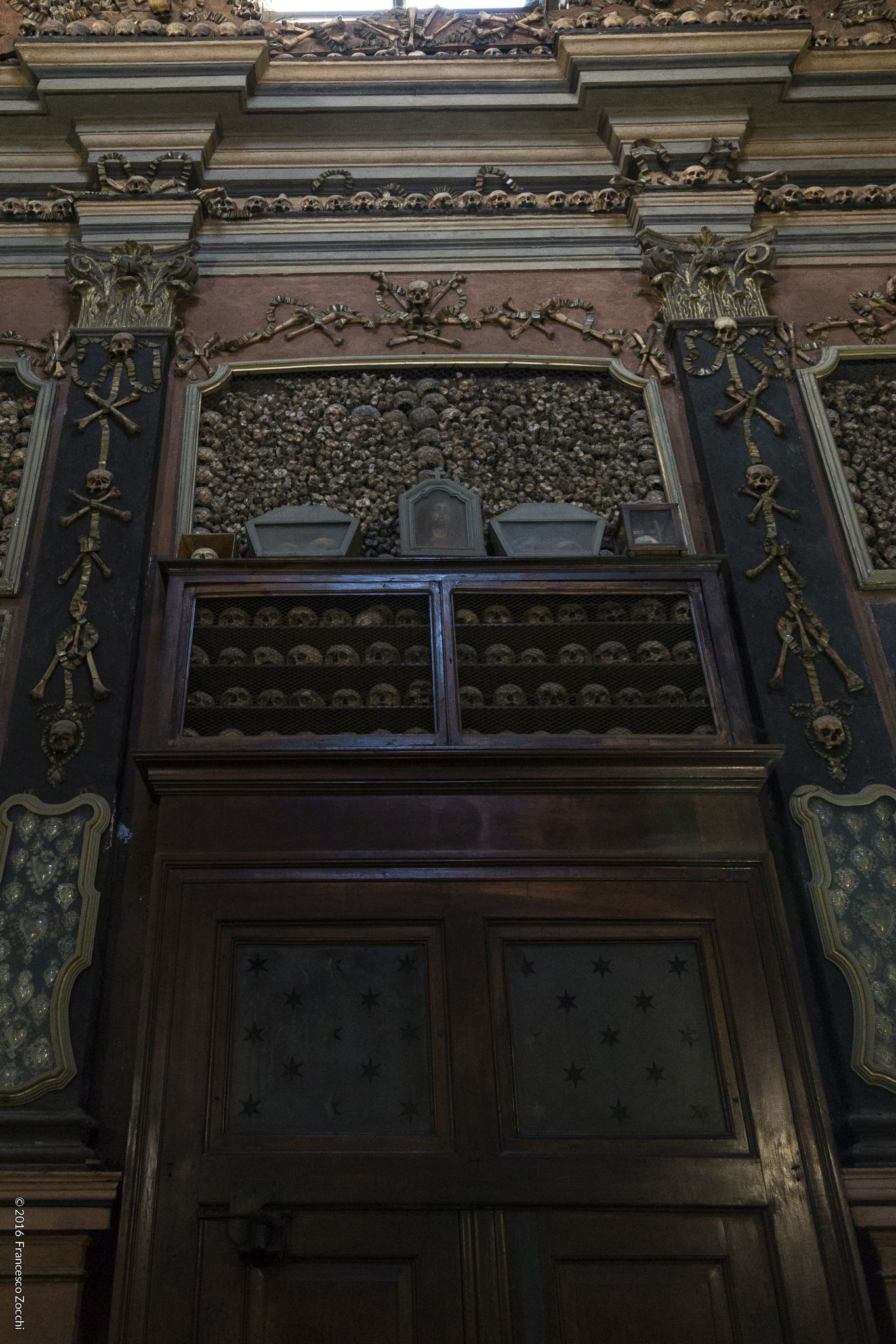 There’s a crypt below the Ossuary that you can access via a stairwell right in the middle of the main church, but it’s sealed under a grate. As curious as I was to see it, the custodian told me that it’s inaccessible – too dangerous, it’s never been renovated and wasn’t created with the purpose of visiting. I was told it houses the corpses of Spanish soldiers, the same ones responsible – at least partially – for the architectural danse macabre in the other room. 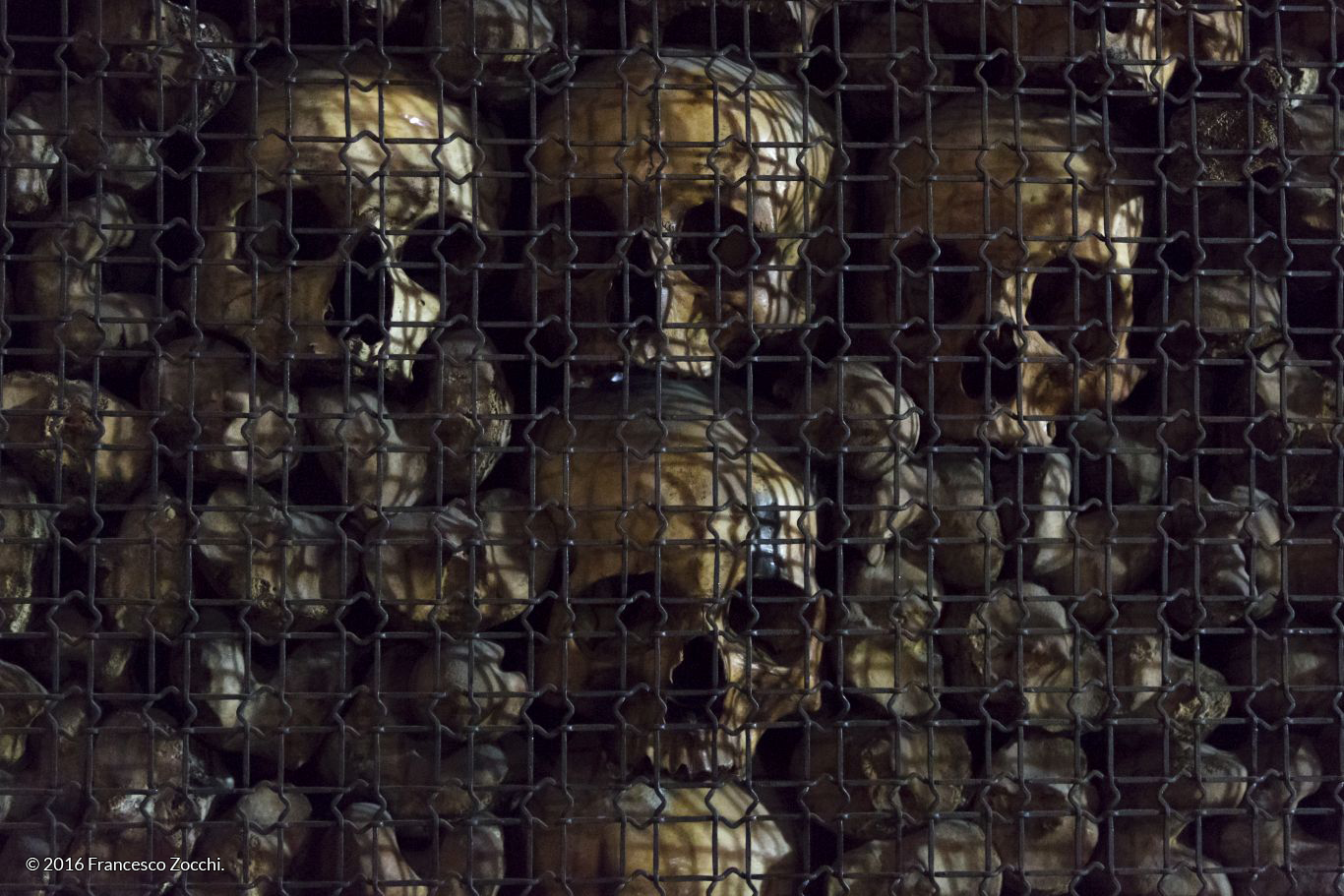 It’s creepy, it’s historic, and it inspires countless horror tales and ideas – and above all it’s free. I’d say visit if you get the chance, and hit me up if you do – I’ll be your translator. It’s a place that makes you think. At least part of the remains on display were put there less than 300 years ago, not during a dark period when folklore and superstition mixed with Catholic beliefs. Should they have done that? Should we finally bury what are remains of actual people, people who lived and witnessed this entire church being built? Or should we keep them as this Gothic work of art they are today?

What do you think?

Huge thanks to Francesco Zocchi for taking the time to take these amazing pictures.