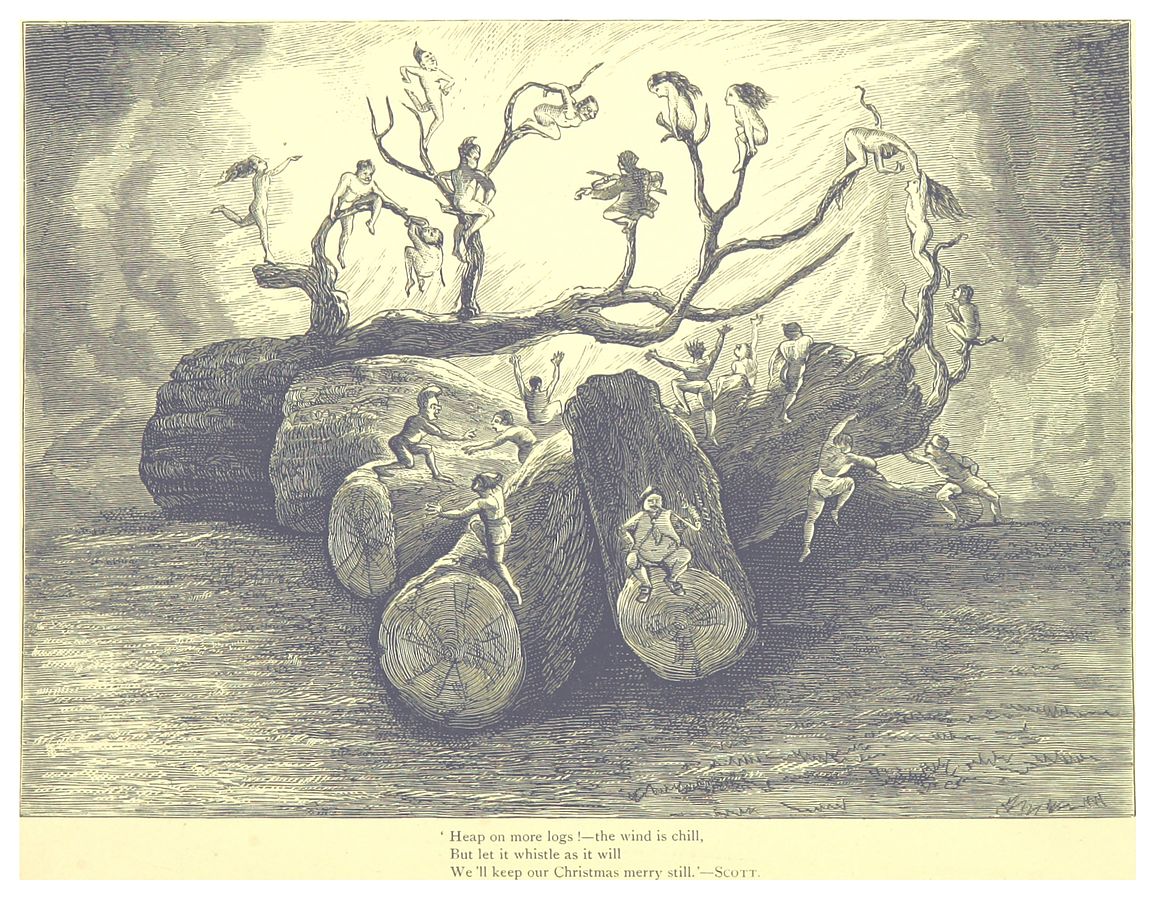 Nearly fifty years ago, in the mountains of County Down, Northern Ireland, I was shown a baptismal font which had been cracked, according to local folklore, by a fairy bolt. The tale concerning it was that one Sunday morning whilst a service was in progress, a fairy woman had come to the door of the church – which she, having no soul, could not enter – carrying a child in her arms. The priest went down to her and asked her business at a holy house. She stated that the father of the baby was inside the church – she named the son of prominent local family – and therefore she wanted her infant baptised into the Church so that it “would one day enter Heaven as its father could”. Turning to the congregation, the priest asked that if this was true, the young man should come down and acknowledge his child so that it might be baptised as a Christian. No-one of course came. The young man who had been named sat where he was and didn’t move – to admit to consorting with fairies was, of course a mortal sin – and turning back to the fairy woman, the priest told her that he could do nothing more for her and dismissed her with an invocation. As she turned away in despair, she hurled a fairy bolt at the baptismal font which stood just inside the church doorway, cracking it severely. If it was not good enough for her kind, she declared, then no human child would have the good of it!  Having been touched by fairy magic, the font could no longer remain inside the church, and so it was dumped in the overgrown corner of a field which is where I saw it many years later. Similarly, some time ago, I spoke to an old woman living near the Gelvin Water, in the foothills of the Sperrin Mountains, on the borders of Counties Derry and Tyrone, who showed me a large purple mark on her leg where she told me she had been struck by fairy shot whilst “cutting rushes at the water’s edge” when a young girl. The mark had never healed and was still painful at times long years after.

Whether or not either of these stories were true, they serve to illustrate the often-complex perceived relations between humans and fairies in popular folk belief. Almost since the dawn of time mankind has held the firm belief that we share the land with other forces and beings that are not always visible to us. From time to time, however, individuals have been made aware of them by catching a brief glimpse of one of them or by the alleged physical results of their activities. To these entities and powers, we have ascribed the name “fairies”.

But what are fairies? Are they simply interpretations and explanations for things which we do not fully understand? Are they the mystical remnants of some lost race, or even the ancestral dead come back to the world of the living – as has been suggested in Ireland? Or they some discrete elder race which boasts abilities far beyond our own limited spectrum? Do they even exist? And if so, what do they look like? Are they the tiny gossamer-winged Disneyesque beings resting in flower-cups?  The word “fairy” has become something of a catch-all term for a number of localised entities who exist in  –  and indeed are part of – the landscape, and who from time to time interact with local people. Whilst many of the “fairies” show perhaps generalised characteristics, they also manifest traits which are specific to their location. They are in fact something akin to a genus loci – part of the spirit of the place.

This extremely welcome book, Magical Folk: British and Irish Fairies: 500 AD to the Present (Gibson Square 2017), edited by Simon Young and Ceri Houlbrook, does a number of useful things. Firstly, it challenges the perception that fairies are always the benign, tiny, flittering, flowery creatures of Victorian ideology. These are not the beings of some animated, almost filmic, imagination, but are rooted in the folklore and traditions of their respective areas. These are trows, kelpies, mekumwasuck and pixies, the beings that live in caves, barrows and mounds and who can do an ill-turn as soon as a good one. Secondly, rather than treating fairies as a homogenous mass, it links them to their specific locations within Britain, Scotland, Wales, and Ireland, commenting on the distinctions and idiosyncrasies of each place. The book includes material from The Fairy Census, the first scholarly survey of the 21st century in Britain and Ireland – and following in the footsteps of Marjorie Johnson and Alasdair Alpin McGregor in 1955/56 – which demonstrates local connections that are still strong. Thirdly, it sets the world of folklore within the context of academia and gives it the intellectual recognition that it deserves. Whilst historians often rightly concentrate on written evidence for their conclusions regarding events and places, there is a tendency to dismiss the oral tale which, whilst it may not be strictly accurate, gives an insight into the communal thinking and perceptions within a particular era and location. The stories are indexed and placed into a regional context which makes comparison between regions all the easier

But one of the greatest contributions which this volume makes is the wonderful wealth of folkloric material from across Britain and Ireland which it contains. Here are stories from all over the country – and beyond – coupled with academic explanation and notation written by a series of knowledgeable authors. The diverse nature of the tales alone coupled with snippets of local folklore makes this a fantastic read – in many senses of the word. It has drawn disparate lore from many parts of the country and as such deserves commendation for that alone. The amount of detail is particularly breathtaking.

Also of particular interest too are the chapters on fairies in both the colonial area of New England and on the Canadian Atlantic coastline. Although arguably American fairy folklore lacks something of the rich traditions of Britain and Ireland, it enjoys a lineage of its own. Here stories brought by settlers from the Old World have mingled with stories of the Native Americans of the American Eastern seaboard and the Midwest. Here we find the Pukwudgie – perhaps America’s best known native fairy – within the Ojibwa culture to the little-johns, dalladadas and mickadenies in the fairy melting pot that is Newfoundland. Whilst at least some of these are probably imports from Europe brought by settlers, some entities have their origins in the folklore of the native peoples, stretching back into antiquity.

This is an essential book for anyone who takes folklore seriously, and can be read by anyone from storytellers entranced by the material which it contains and by academics who are researching the truth behind the tale. This is a treasury of lore which is well worth any reader’s attention.

The fairy-struck baptismal font has long been removed from the corner of the field where it lay all those years ago and yet its story continues to be remembered almost into the modern age. Despite our hi-tech bustling world, fairies, it would seem, are not all that far away.

Magical Folk: British and Irish Fairies: 500 AD to the Present

Do check out Simon Young’s excellent new book with Ceri Houlbrook (ed), Magical Folk: British and Irish Fairies: 500 AD to the Present (Gibson Square 2017), a collection of fairylore essays by
folklorists and historians:

‘British and Irish fairies have been around since 500 AD. Ever since the Cottingley Fairy Hoax (1917-21) they have been in decline, however. In the footsteps of The Lord of the Rings and The Game of Thrones, British fairies are regaining their old lustre. In this book Simon Young and Ceri Houlbrook have gathered the first major history of British & Irish fairies in almost half a century to ensure that Britain’s fairies and fairylore survive into the 21st century. Did you know that many British fairies don’t have wings and can be the size of a leaf or up to 15 foot tall?’

‘Some five hundred fairy experiences follow in these pages, and over 160,000 words
about encounters with the impossible. These were, in the vast majority of cases, taken
from the Fairy Census, an ongoing internet
questionnaire about who sees fairies, when and why: the questionnaire has been
reproduced in an appendix to the present book.’

Dr. Bob Curran was born and raised in a remote mountain area of County Down in Northern Ireland. Leaving school at 14, he worked in a number of jobs including lorry driver, professional musician, journalist, and even as a scripter of comics. He travelled extensively in many countries before returning home to settle down and work in the Civil Service. Later, he went to University where he obtained degrees in education, history and educational psychology, whereupon graduating as a teacher. Although he still teaches, much of his work is now regarding community development within Northern Ireland, in this capacity, he acts as a consultant to a number of cultural bodies within the province. He he deals with cross-border matters with the Irish Republic, working for the Office of the First and Deputy First Minister of Northern Ireland. Sitting on a number of cultural communities, Curran has also worked directly as a governmental advisor and as a consultant to several bodies which have been set up by other governments. He also acts as a consultant to a number of tourism companies, giving lectures and conducting tours on many topics of local and national Irish history. As a writer, Curran has been extremely prolific and has approximately 38 books to his name mainly on the subjects of history and culture. In addition, he has a number of works published in other languages including Japanese, Italian, French, Portuguese (Brazil), Spanish (Spain and Mexico), German, Urdu and Latvian. He has also served as a contributor and and consultant to various radio and television programs both for private companies and national networks. Married and with a young family, Curran continues to live in Northern Ireland on picturesque North Derry coast, not far from the celebrated Giant's Causeway. Visit his website here.