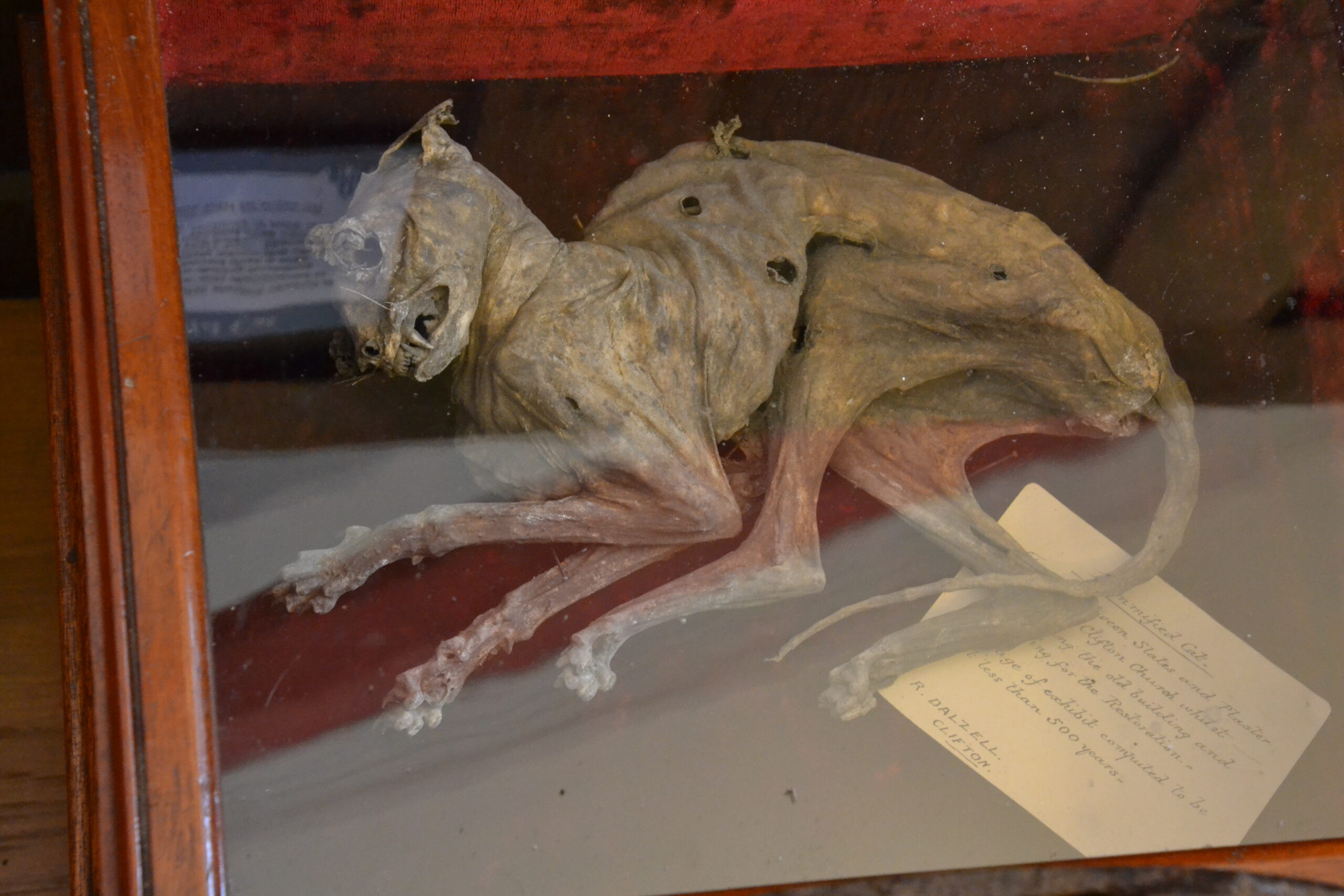 What do a child’s shoe, a cod-liver oil bottle, and a desiccated cat have in common? They’re all objects that have been discovered in unusual locations within buildings. In fact, a vast variety of objects have been found (from pantaloons to chickens), often dating to the 18th and 19th centuries, under floorboards, hearthstones, and thresholds; within walls; above doors and ceilings; up chimney breasts; in thatching; and buried in the garden. People usually find them today when they’re undertaking renovations on their homes, and they’re in such odd places that most of them can’t have wound up there accidentally; they must have been deliberately secreted away by past occupants many years ago.

But why? Practically nothing was written at the time about this custom, so we have no sources explaining why such objects were concealed and what their concealers were hoping to achieve. This hasn’t stopped finders and scholars alike from tossing around theories, the most common of which is that these items were secreted away in the post-medieval home to protect both house and occupants from malevolent forces.

The post-medieval world was rife with threats, both natural and supernatural. Along with fire, illness, and vermin, fear of witches, demons, spirits, and even fairies were abundant across the British Isles, inciting a very real anxiety that these threats may infiltrate the household. Understandably many families went to some lengths to protect the most vulnerable parts of their homes (roofs, chimneys, doors), employing what Manning (2012) has termed ‘domestic magic’ in the form of supernatural safeguards. These safeguards are known as apotropaic devices, i.e. objects used to avert evil forces, and the popular theory is that concealed deposits were one such form of apotropaic device.

The question remains though: why would a child’s shoe, a cod-liver oil bottle, and a desiccated cat be considered effective supernatural safeguards? Concealed deposits range from the mundane to the distasteful, but they certainly don’t seem inherently magical. And yet people went to the trouble of bricking them up in walls, secreting them up chimney breasts, or laying them beneath hearthstones. They must have invested them with some significance; with some power. But why? And how can we distinguish accidental, non-ritual, or even sentimental concealments (e.g. time capsules) from apotropaic deposition?

A humble blog post can’t possibly hope to examine the myriad theories behind this custom – an endeavour that has been achieved elsewhere (see Further Reading below). It can, however, hope to highlight the most popular and convincing arguments by focusing on some of the more common concealed deposits: shoes, bottles, and animal remains.

The shoe is the most commonly concealed object in England. (Figure 1.) Northampton Museum maintain an Index of Concealed Shoes, begun by June Swann back in the 1960s and currently containing records of close to 2000 shoes – men’s, women’s, and children’s – that have been found in unusual locations within buildings. Why shoes? Theories abound. Maybe they were considered apotropaic because of their material; in popular belief, fairies, demons, and spirits didn’t like the smell of leather. Or maybe it was because of their shape, bowl-like, explaining how John Schorn, a parish priest from Buckinghamshire, was said to have captured a demon within a boot, leading to the shoe being seen as a form of ‘spirit trap’ in popular belief (Merrifield 1987: 135; Hoggard 2004: 179). Or maybe it was the shoe’s close association with its owner. Swann notes that the shoe is ‘the only garment we wear which retains the shape, the personality, the essence of the wearer’ (1996: 56); by keeping the foot’s shape – and smell! – the shoe can stand as substitute for the wearer. This association could have given the shoe a certain supernatural potency – or it could have enabled it to act as a type of decoy. A demon or witch might enter the house, mistakenly think that the concealed shoe actually is its past wearer, and attack the shoe instead, becoming trapped inside.

Animal remains are another popular form of concealed deposit. (Figure 2.) Desiccated cats, first explored by Margaret Howard (1951), are particularly common, with many having been found bricked up in walls or sealed beneath hearthstones, becoming dried or ‘mummified’ over time via natural processes. Sometimes the cat’s accompanied by a rat or a mouse. Granted, some may have been accidentally enclosed, but the locations of many (e.g. sealed in an air-tight space beneath a hearthstone) suggest that some at least were deliberately concealed, probably to scare away vermin – either natural or supernatural.

Bottles are another fairly common concealed deposit. (Figure 3.) However, these are different to the others in that we’ve found some contemporaneous writings about them, in 20th-century newspapers and legal cases. It appears that bottles – which ranged from Germanic stoneware vessels known as ‘Bellarmines’ to recycled glassware – were filled with objects (e.g. nails, pins, hair) and substances, (e.g. urine) before being secreted away. Some were used as ‘witch-bottles’, intended to protect a building and its inhabitants from witchcraft or to counter a witch’s curse, while others were love-charms or cures for physical ailments (Davies & Easton 2015; Hoggard 2004, 2015a; Merrifield 1987; Semmens 2000).

As you’ll no doubt have noticed, we have more questions than answers about these concealed deposits. With the exception of the literature on bottles, the only evidence we have are the objects themselves and whatever folklore there is floating around about this practice – as such, we’re always eager to hear of more examples and any folkloric anecdotes surrounding the custom of concealment, so please do tweet any thoughts, ideas, knowledge, or stories you have on Thursday, with the #FolkloreThursday hashtag. The more information we can share, the better chance we have of understanding this enigmatic practice.

Hoggard, B. 2004. The archaeology of counter-witchcraft and popular magic. In Davies, O. & de Blecourt, W. (eds.) Beyond the Witch-Trials. Manchester University Press, Manchester: 167-186.

Hoggard, B. 2015a. Witch-Bottles: Their contents, contexts and uses. In Hutton, R. (ed.) The Physical Evidence for Ritual Acts, Sorcery and Witchcraft in Christian Britain. Palgrave Macmillan, Basingstoke: 91-105.

With a PhD in Archaeology, Ceri Houlbrook considers herself a historical ethnographer and archaeologist, and is particularly interested in the material culture of popular customs and beliefs. She’s currently a Postdoctoral Research Assistant on the ‘Inner Lives: Emotions, Identity and the Supernatural, 1300-1900’ project at the University of Hertfordshire, working alongside Prof. Owen Davies on the ‘Concealed Revealed’. This project strand is aiming to survey concealed deposits across the British Isles and beyond, and to consider the 'afterlives' of these hidden objects by engaging with their contemporary finders and custodians. Please visit the project website, add a find yourself to our growing survey on here, or contact Ceri directly with any knowledge, ideas, or stories you have on c.houlbrook@herts.ac.uk.