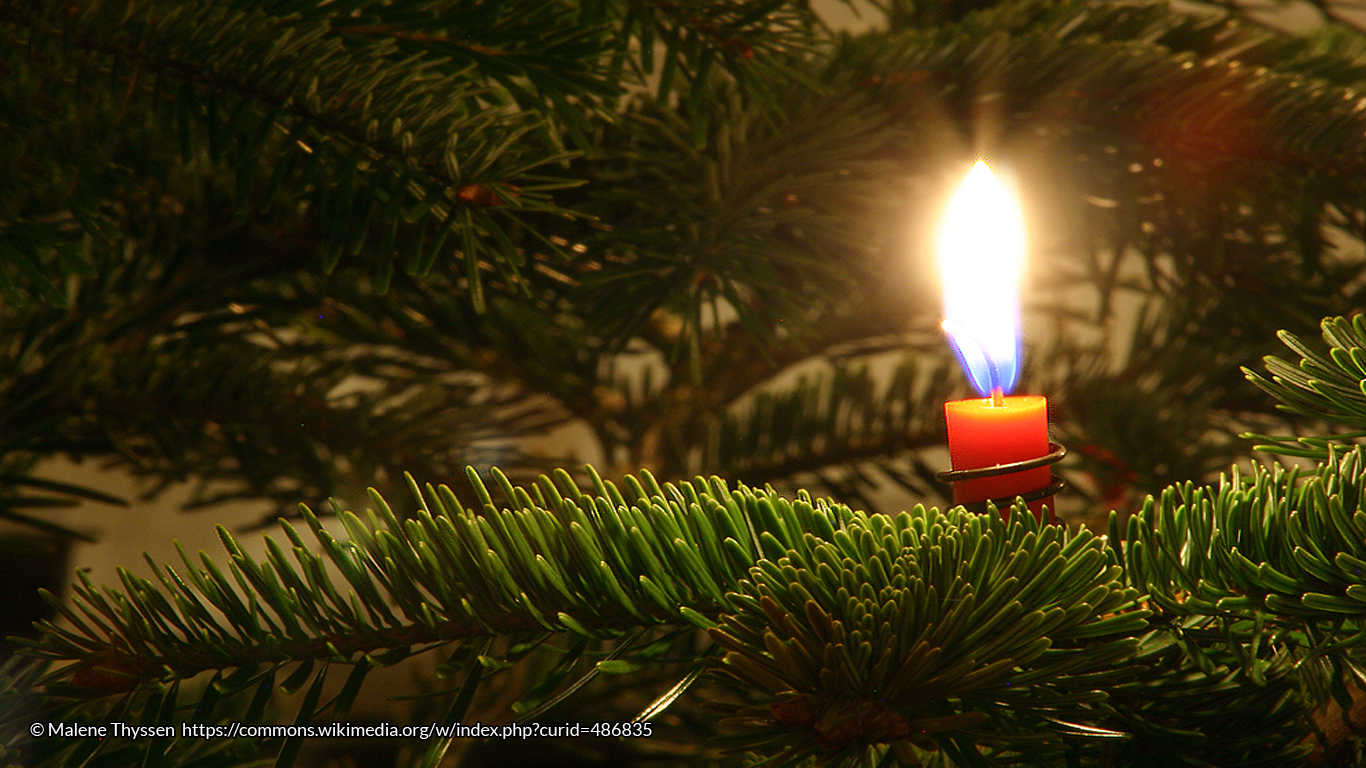 Although the traditions and rituals of Christmas have evolved through the centuries, many of them have remarkably ancient origins linked to the midwinter festivals of Yule and Saturnalia and the hope of renewed life as the days lengthen with the promise of spring.

Yule, a time for present-giving and indulgent eating and drinking, was a pre-Christian celebration enjoyed by peoples of northern Europe. Today’s Yule log represents the fires lit on these dark days. Oak was the wood of choice, as it was believed to be the most likely to draw the sun back to the earth.

The mistletoe (Viscum album), the white-berried, sickle-leaved evergreen which grows on the oak and other trees such as tall limes and poplars, and on apple trees as a semi-parasite, was believed to guard the tree from evil – including witchcraft. It also has strong links to fertility, which is undoubtedly why couples still kiss beneath it at Christmas time. Cutting mistletoe with a golden sickle on the sixth night of the moon will, it is believed, preserve the plant’s magic. It was even hung in cowsheds to ensure the continued health of livestock.

Tradition still dictates that with each kiss a man should remove one berry and put it in his pocket or buttonhole. On production of the berry he can then claim more kisses on demand. In the past, mistletoe was often dried and kept from one year to the next for good luck in every season. However it has long been believed that a girl or boy will stay unmarried for the year if they are not kissed under the mistletoe at Christmastime.

There are other rituals that are also thought to be worth performing or observing to bring love and luck, health and happiness for twelve months:

The holly, ivy and mistletoe are the quintessential Christmas evergreens, and it is believed that all must be handled correctly to avoid ill fortune. They must certainly be removed by 6 January, which is Twelfth Night or the feast of the Epiphany. For their Christmas celebrations, early Christians adapted the traditions of the bawdy Roman midwinter festival of Saturnalia, bringing in evergreens to decorate their homes and churches. Christmas Eve is the most propitious day for cutting greenery; if you use it before this date quarrels are, it is said, sure to ensue.

By old country lore, while the prickly holly (Ilex sp) represents the male, the ivy is undoubtedly feminine. The Greeks called it cissos after a dancing girl who danced herself to death at the feet of Dionysus and was transformed into the plant by the god, so moved was he by her art. Unlike holly, ivy (Hedera sp) is not always welcomed indoors but kept for decorating doorways and porches, ‘just in case’. While mistletoe could be brought into the home, it was banned from churches for decoration because of its pagan associations and is still discouraged today.

Until it was introduced from Germany by Prince Albert, the Christmas tree was virtually unknown in Britain, though the tradition of bringing evergreens indoors at this season goes back to ancient pagan festivals. One possible origin for the custom of decorating trees for Yule relates to legends that certain trees burst into bloom on Christmas Day. One was the miraculous Glastonbury thorn, believed to have sprung from the staff of Joseph of Arimathea who, on his mission to Britain, planted it in the ground on Christmas Eve.

Such flowering trees were especially revered in Germany. In 1430 one writer recorded that:

‘Not far from Nuremburg there stood a wonderful tree. Every year, in the coldest season, on the night of Christ’s birth this tree put forth blossoms and apples as thick as a man’s thumb. This in the midst of deep snow and in the teeth of cold winds.’

Trees were cut and used in plays performed at Christmas, telling the whole Christian story from Adam and Eve to the Resurrection. In this context the Christmas tree represented both the Tree of Knowledge and Christ’s Cross.

Lights on the Christmas tree illuminate the dark days of winter as well as the advent of the ‘Light of the world’. Legend has it that it was Martin Luther who first decorated a tree with candles.

So however you celebrate midwinter, knowing that you are sharing its traditions with the folk who lived long ago will make it extra special.

Win a set of three books by Ruth Binney!

Ruth Binney and her amazing team have kindly offered a set of three wonderful books for a lucky #FolkloreThursday reader! The set includes the titles Plant Lore and Legend, The English Countryside, and A Word To The Wise. Sign up for the #FolkloreThursday newsletter for details of how to be in with a chance to win (valid December 2016).