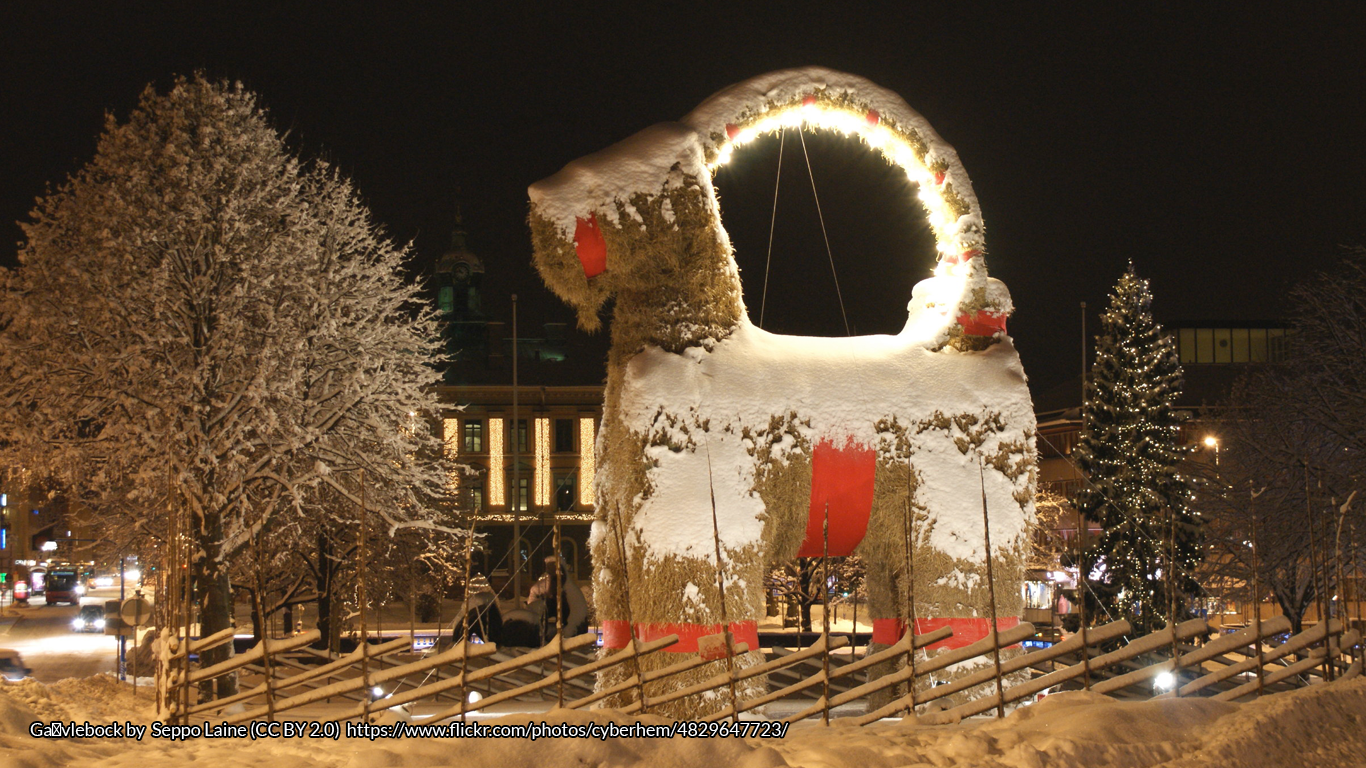 He used to bleat. Walking upright, a goat the size of a grown man would tramp in from the cold with a sack hanging over his shoulder, bleating. I knew it meant presents were about to be handed out. Didn’t matter: I was scared to death. I was four. Maybe five. And this was my introduction to julbocken. The Christmas Goat.

I didn’t know it then, but the goat is a common feature of Nordic Christmases. There’s “Joulupukki’ in Finland, which, translated directly means Christmas Goat, but today resembles the Santa Claus of Coca Cola fame. There’s Gävlebocken, a giant straw goat built every year before Christmas in Gävle, Sweden, who bravely stares down arson attempts the entire month of December. It even has its own Twitter account—@Gavlebocken. Too often the arsonists win, but every year it comes back. There’s “julebukking,” which could literally be translated as Christmas goating. As in, people dress up as goats and go door-to-door asking for food or drink in Scandinavian countries, especially Norway, and in several American states too, especially those of the Upper Midwest. And then there’s the Christmas Goat on the Swedish island of Gotland (not Goatland. I know. It’s close.).

Goats are not uncommon creatures in Nordic folklore. The most obvious are, of course, Tanngnjóstur and Tanngrisnir, the two goats responsible for hauling Thor and his hammer all around Scandinavia. It’s easy, then, to just draw a straight line from the medieval sagas that gave us Thor and his goats to the goats of Christmas-present. It might be easy, but it’s not necessarily correct. While there were undoubtedly many pre-Christian beliefs that carried over once the Nordic people converted, just as in science, correlation does not equal causation. The fact is that we don’t really know why goats play so heavily in Scandinavian Christmas.

In his book Christmas in Scandinavia, Sven H. Rossel writes that the tradition may have arisen due to Scandinavians slaughtering a goat around the holiday. Jonas Engman, ethnologist and chief archivist at Nordiska museet in Stockholm, writes that St. Nicholas, whose feast day in the Catholic tradition is December 6, was often portrayed as having tamed the devil in various folk traditions, including miracle plays. The devil would often be depicted in the form of a goat (a theriomorphic tradition common across medieval Europe), which St. Nicholas had leashed for the world to see. In eighteenth and nineteenth century Sweden, far removed from Catholicism, the goat remained. Instead of St. Nicholas parading the devil around on a leash, though, the goats of Scandinavia began handing out presents. It’s not as far-fetched as you might imagine since St. Nicholas had been known to give presents to small children. Subtract the Catholic St. Nicholas, leave the devilish goat and, ta da, a tradition has changed.

No matter the origins, the tradition lives on, as I learned at a young age when julbocken, who happened to be the exact same height and weight as my uncle, came barging into the home with presents, bleating and terrifying. Today the gift-giving goat has mostly been replaced by a Santa Claus figure dressed in red throughout the Nordic countries. More common are the straw, goat-shaped decorations hung on the Christmas tree. But with folks like my uncle, who is now terrifying a new generation of children dressed as julbocken, the Christmas goat tradition lives on in some places.

In the United States, for example, Norwegians brought julebukking with them across the Atlantic and continued the tradition in the Upper Midwest in states like Iowa, Minnesota, and Wisconsin. Similar to Christmas mumming in countries throughout Europe, julebukking, as Kathleen Stokker writes in Keeping Christmas: Yuletide Traditions in Norway and the New Land, was both a form of social control and an opportunity for subversion. Julebukkers would barge into the home demanding food and drink. They’d sing, dance, scare the kids, and abandon all polite behavior. All the while, the homeowners would interrogate the costumed community members, grabbing at them and staring in hopes of identifying just who was behind the mask. Finally, the julebukkers would be revealed, either through clever questions or by simply removing their mask.

The julebukkers could dress up as they saw fit, as a goat, of course, but also by cross-dressing or subverting other social norms. By going door-to-door demanding food and drink, however, they could check up on the holiday preparations of their neighbors, families, and friends. Were the Christmas cookies baked? Was the aquavit ready to be served? Was the home clean and ready for guests? As Stokker writes, “it gave assurance that each family complied with social norms and could, therefore, be relied upon in times of trouble” (228). Julebukking, then, was a way to create and maintain community. Newcomers were welcomed to the community through this tradition and old-timers were able to solidify their place in that community.

By the 1940s, the tradition that had survived a trip across the Atlantic was fading. But similar to the Hardanger fiddle, a revival was underway already in the 1970s. While the tradition is not nearly as common as it once was, communities are still participating in julebukking—like Petersburg, Alaska. The tradition has changed a bit. Today, there seems to be less focus on social control and subversion and more focus on entertainment. As Stokker writes, the tradition “continues to offer group initiation and fellowship” during the holiday season (238).

So the goats that roamed the Nordic countries, and even Nordic America, are different than they once were. That’s no surprise, because as any folklorist will tell you, traditions change. Traditions change because the old meanings are no longer relevant, though new meanings can be applied to the old forms. It changes because we change it. Maybe we stop going door-to-door dressed as goats to try to pressure people into cleaning for the holidays. Or we stop handing out presents to children while dressed as goats to try to scare kids into good behavior. Instead, we make these traditions relevant to our own place and time, tweaking this here, changing that there, until the tradition becomes our own. And so we hang straw goats on the Christmas tree and still go julebukking, but the whys and the hows have changed. But no matter why or how the traditions have changed, the goats remain, in many parts of the Nordic countries and the Nordic diaspora, an important part of the Christmas season.