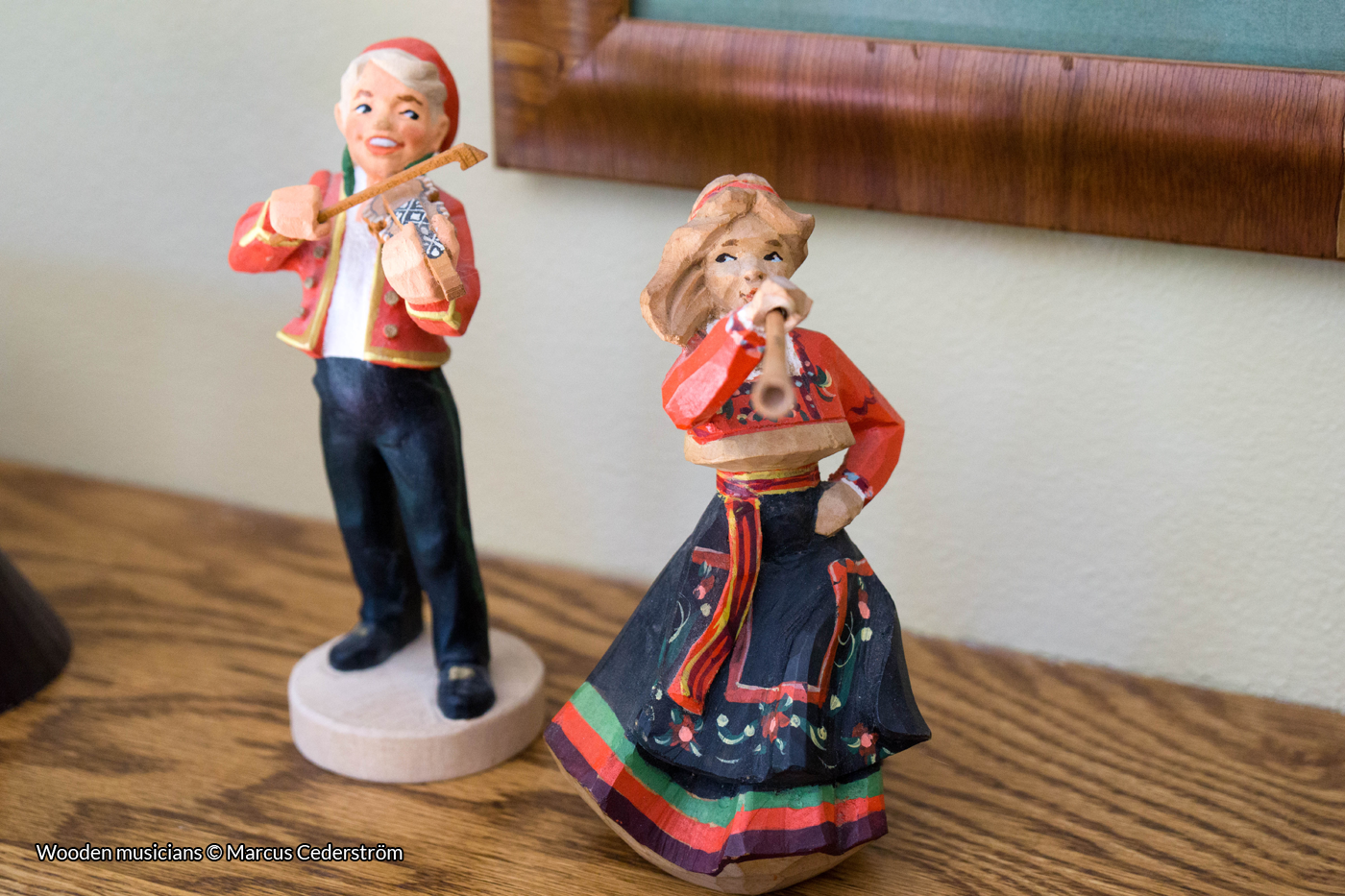 “The story often goes [that] the Hardanger fiddle was the devil’s instrument. And it wasn’t played in church,” said David Listug of Stoughton, Wisconsin. “And the reason being is because then people drank and they tossed their bodies around and things like that and fights broke out and this is unchurchly.”

It’s fitting then that when, in 1941, Otto Rindlisbacher of Rice Lake, Wisconsin, played a Norwegian song on his Hardanger fiddle, the tune’s title was “Devil on the Wine Keg.” You can listen to it here.

The Hardanger fiddle has come a long ways since then—now it’s seen as a staple of traditional Norwegian folk music. David Listug explained the history of the Hardanger fiddle in an interview at his home in May of 2017. Born in 1947 in Stoughton, Listug is a Norwegian-American musician who plays the violin, Hardanger fiddle, and the jaw harp.

Growing up in Wisconsin, David’s father, the son of immigrants from Telemark, Norway, played the violin, although seldom in the home. Listug recalls that his mother used to say “‘He’s not doing that scratching in this house.’ I remember there were just real battles.” Despite those squabbles, as an adult David developed an interest in Norwegian folk music. With a chuckle, he said, “I heard some music on in the ’80s and I said ‘wow this can’t be that difficult.” With help from a friend and years of practice – and probably a bit of scratching that would have led to yet another battle with his mother – David is still learning, nearly forty years later. Most of what he plays he’s learned by ear, listening to CDs, original recordings, and other musicians, again and again.

Over the years the instruments and folk music of Norway have become an important part of Listug’s heritage. He plays at folk dances in Wisconsin – at places like Folklore Village where the Hardanger Fiddle Association of America hosts the annual Hardanger Fiddle Music and Dance Workshop – and in Minnesota, sometimes with the American Swedish Institute’s Spelmanslag. (David jokes about Norwegian Americans playing Swedish music, saying, “I’m trying to bring them culture!”).

The Hardanger fiddle, hardingfele in Norwegian, takes its name from the Hardanger region of Norway. Known for needlework, bunads – the traditional dress of Norway – and, of course, the fiddle, the region is also beautiful. Like postcard, can’t-take-a-bad-picture, beautiful. But beauty wasn’t enough to keep Norwegians from leaving the country. In fact, between 1865 and 1930, nearly 800,000 Norwegians left for the United States. Some returned. But many settled in the New World.

Usually decorated with inlaid pearl and scrolls and floral patterns drawn in black ink, the neck of the fiddle is adorned with a carved head. Often it is a lion or dragon that stares back at the fiddler as they play for the people who take to the dance floor.

(Check out this compilation video from the Hardanger Fiddle Association of America to hear what the Hardanger fiddle sounds like.)

As Norwegians settled in the Upper Midwest, they continued playing the folk tunes they had learned in the Old World. They passed along those songs to their children in the New World along with their instruments, their language, and their stories. The children and grandchildren born in the United States didn’t always actively maintain those traditions, though. The Hardanger fiddle is a notoriously difficult instrument to play, so perhaps it’s not surprising that while the instrument was initially quite popular with Norwegian Americans, it lost its lustre in the generations to follow. Listug mused,

“I think World War II killed the traditional music because people started with radios and listening to things that were popular music at that [time] and the old Scandinavian tunes were really old-fashioned and nobody wanted to be old-fashioned.”

That revival has taken root and today there’s an active group of Hardanger fiddlers who come together every year in Dodgeville, Wisconsin, as part of the Hardanger Fiddle Association of America. The University of Wisconsin – Madison has several original recordings of Norwegian-American fiddlers in their digital collections, a supplement to the Norwegian American Folk Music Portal. So with a little help from collectors, folklorists, and, most importantly, Hardanger fiddle players, the tradition lives on. The Hardanger fiddle has gone from being quite common during Norwegian migration to fading in the middle of the 1900s to a once-more thriving scene. And that’s the thing about folk traditions: they stick around (and change!) as long as they’re relevant. For many Norwegian Americans, the Hardanger fiddle is still relevant because of the way it connects them, visually, bodily, and of course aurally, with their Norwegian heritage. It’s a way to connect with their family, their community, and their culture. And, of course, it’s a way to get people out on the dance floor, tossing their bodies around and maybe sharing a drink or two.

Lovoll, Odd S. The Promise of America: A History of the Norwegian-American People (Minneapolis: University of Minnesota Press, 1999).