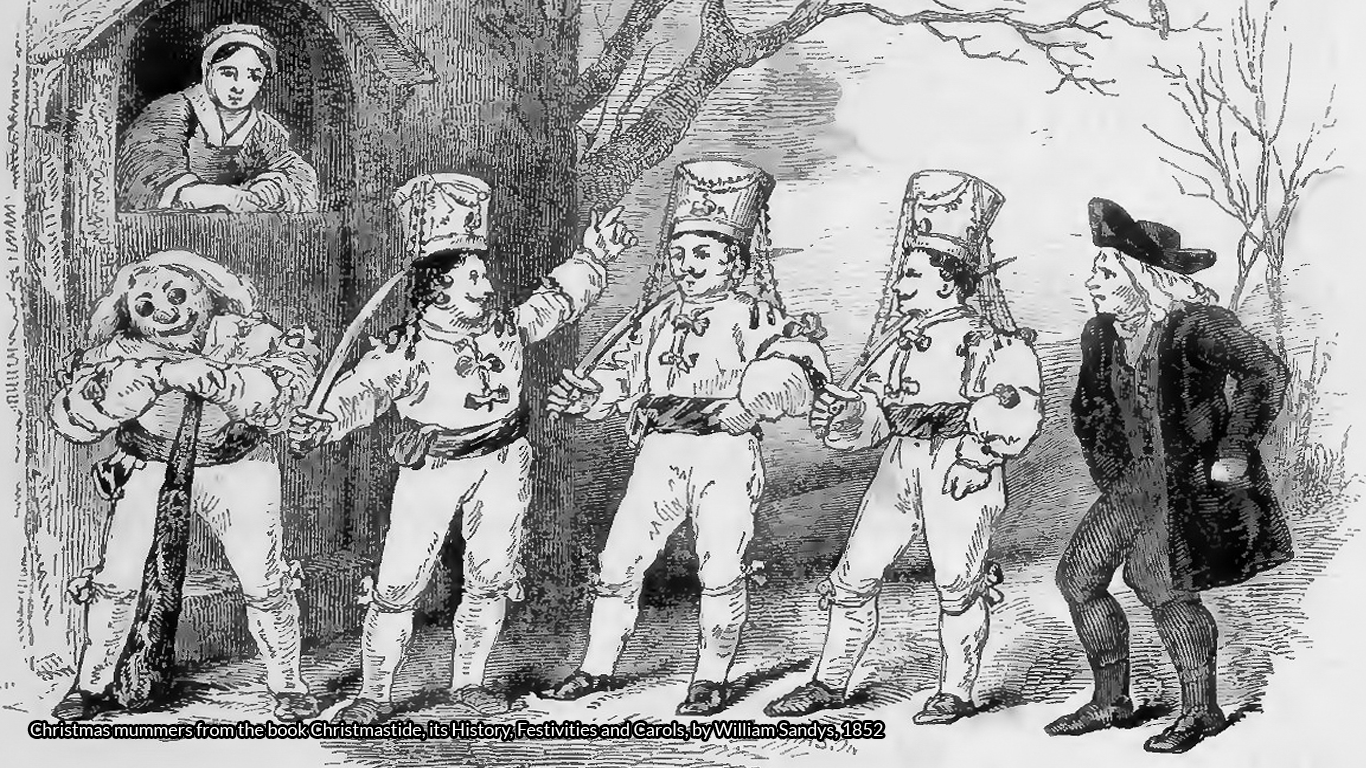 The appearance of a Turkish knight, Beelzebub, and a horse’s skull mark out a centuries old winter tradition in rural communities across Britain.

“Now winter it is coming on, dark, dirty wet and cold,

And for to try your good nature, this night we do make bold,

This night we do make bold, with your ha’penny and strong beer,

And we’ll come no more a-souling until another year.”

These words, heard being sung outside the door of a Cheshire pub, are a clue that a bunch of mummers are about to burst in and perform a soul-caking play.  Mummers plays were a common winter tradition, often performed around Christmas, and this was particularly the case in the counties of Somerset, Dorset, and Shropshire for instance.  In these areas we might find Father Christmas being one of the characters of the play, though quite different in nature to the Santa of today.  The Galoshins plays of Scotland tend to be performed from end of October to the start of January.  Elsewhere, the plays might be performed at different times in the year, for example, North Yorkshire do plays around Plough Monday, Lancashire have them around Easter and are called Pace Egg plays accordingly.  In my native Cheshire we do them around All Souls Day, 2nd November, and so they are called Soul Caking plays.  For those of us who take part in the plays, it marks the start of winter.

The ‘cakes’ part of the play’s name comes from the soul cakes which were once eaten in memory of those that had died in the previous year, a Cheshire tradition.  The origin of this is unclear but may be connected in some way with the tradition of the sin eater, to which there are a few references, just over the border in Shropshire.   That was where someone would eat a cake over the corpse at the wake and thereby take on the sins of the deceased thereby helping their soul through purgatory.  The soul cakes of Cheshire were a similar idea, but just annual, rather than when someone died.  In some places souling was just the singing at doors and receiving the cakes and ale, a bit like carolling or wassailing, but in other places the play was done.

I’ve been performing in these plays for 20 years now, taking over from my dad, in what appears to be the traditional way these things were passed on.  Our group, Jones’ Ale Soul Cakers dates back to 1970, being part of the folk revival.  The whole idea of this type of mumming only goes back to the 1740s, though older folklore books tend to state that the plays are an ancient tradition, pre-Christian, connected with fertility and all the usual clichés, but there are chap books from the 1740s with the essence of the play in, and the earlier surviving notations of mummers plays are closer to that text than the later versions.

The essence of the play is that the hero, St George in our version, challenges various opponents to fight, defeating them all and killing the last.  He then calls for a doctor to restore him to life.  There’s a lot of opportunity for slapstick at this point and the doctor also boasts of his skills in much the same way as the mid-18th century quacks and mountebanks, which again points to the origin date for these plays.  The cure in our play is ‘alec and plain’ which is clearly the cure-all sold in marketplaces of the Georgian era – elecampane.  After the revival of the dead soldier, a few other characters enter, but aren’t connected to the main action of the play.  These include two characters which are in all the Cheshire plays but much less common outside the county, Beelzebub and the Wild Horse, or as he’s called in our version, Young Ball.

In Cheshire, the tradition is that if you don’t have the horse, you can’t make a collection.  There were once fights between rival groups of soul cakers, known as ‘souling gangs’ and sometimes the horse’s skull would be stolen.  We’re on to our third skull for Jones’ Ale, though this one has survived since 1990.  This part of the play might have crept across the border from the Welsh mari lwyd tradition, it’s very similar.  There is something about carrying a skeletal horse through the darkened streets which is particularly suited to the long nights of winter.  Historically the tradition was to collect soul cakes and ale from the larger houses.  These days, mummers tend to perform in pubs and collect cash for charities.  In recent years the Jones’ Ale Soul Cakers of Cheshire have collected for Chester Food Banks.

The Alderley play that we use is the oldest surviving example from Cheshire, being recorded as performed “prior to 1788” and is notable as being the only Cheshire example which didn’t take place in November, but rather at Christmas.  Originally, it was performed as part of the festive entertainments for the Stanley family who were the big landowners in Alderley.  All the performers were from the Barber family, this was the case from the late 18th century to the early 20th century.  Today’s Alderley Mummers, revived in the late 1970s, go out around Christmas like their predecessors.  In recent years, our Jones’ Ale group have also begun to perform over the festive period to satisfy a need for some real tradition as an antidote to the modern commercial Christmas.

A Christmas mummers’ play is described at length in Thomas Hardy’s 1878 novel The Return of the Native:

At this moment the fiddles finished off with a screech, and the serpent emitted a last note that nearly lifted the roof. When, from the comparative quiet within, the mummers judged that the dancers had taken their seats, Father Christmas advanced, lifted the latch, and put his head inside the door.

Humpbacked Father Christmas then made a complete entry, swinging his huge club, and in a general way clearing the stage for the actors proper, while he informed the company in smart verse that he was come, welcome or welcome not; concluding his speech with

And give us space to rhyme;

Upon this Christmas time.”

There are now around half a dozen souling gangs surviving in Cheshire, they were once much more common.  It seems that many large villages had a gang until the start of the 20th century.  Most of today’s groups have arrived in the folk revival of the 1960s-70s, though Antrobus Soulcakers are claimed to be an uninterrupted tradition since the late 19th century.

Having seen the others, our style of performance in Jones’ Ale Soul Cakers is quite different in a couple of ways.  Firstly it’s a lot livelier, most of the other groups more or less declaim their lines in a near monotone which might well be more in line with the tradition.  My friend Alan Garner reckons that you know when something is a real tradition as those carrying it out do it as if a mundane occurrence, whereas those who have revived them do it with great show and spectacle.  I think there’s something in that, but it doesn’t stop us.  We work the pub crowd into it, and there’s a lot of interaction between the audience and performers.  This makes our show a lot longer, more like 20 minutes in length, rather than the 2-3 minutes which you might see with Warburton Soulers.  All are equally valid of course, but it definitely seems as if today’s audience prefer our version!

Some of the costumes in our play are a bit different too.  A couple of years ago, Beelzebub changed from the original costume used since 1970, looking like a sort of 18th century stage devil, to a bank director in suit, but with a partially unzipped face revealing red skin, red eye and horn on one side.  He still carries a frying pan and club of course.  Our horse is also different to all the others in Cheshire where they bend over and hold the horses head in front, similar in style to a pantomime horse.  Apparently the Jones’ Ale horse started out like that, but in the 1980s the Chester Gateway Theatre borrowed it for a show and when it came back there was a whole new frame so that it sits on your shoulders and stands up to about 8-9 feet high, with a decorated cloak hiding the person carrying it, very much like a Mari Lwyd seen in Welsh celebrations at New Year.

So long as these traditions evolve, they will be able to survive and find their place our changing world.  Whilst these annual outbursts of mummers’ plays endure they will entertain audiences; enough of the old mischief and mystery remains to keep our folk culture thriving.  The exploits of St George, the Quack Doctor and companions help to brighten up long winter nights and mark out the turning of the year.

Tom Hughes is an engaging storyteller who has been captivating audiences for over a decade with his folk tales and music. The legends from the landscape of his native Cheshire regularly make an appearance along with stories from across Europe with tales for every occasion. Tom has performed in cosy clubs as well as the stages of major festivals. Tom's work often features bagpipes, though not of the Highland type, but the softer tones of pipes once very popular in England. He is the Education Officer for the Bagpipe Society and works with schools and festivals to introduce people to the folklore and music of this ancient instrument. Tom is also one of the organisers of Word of Mouth storytellers in Manchester, one of the country's longest running story clubs. He has also run regular storytelling clubs for school pupils as well as courses in folklore and legends for adults. Visit Tom’s website or follow him on Twitter.