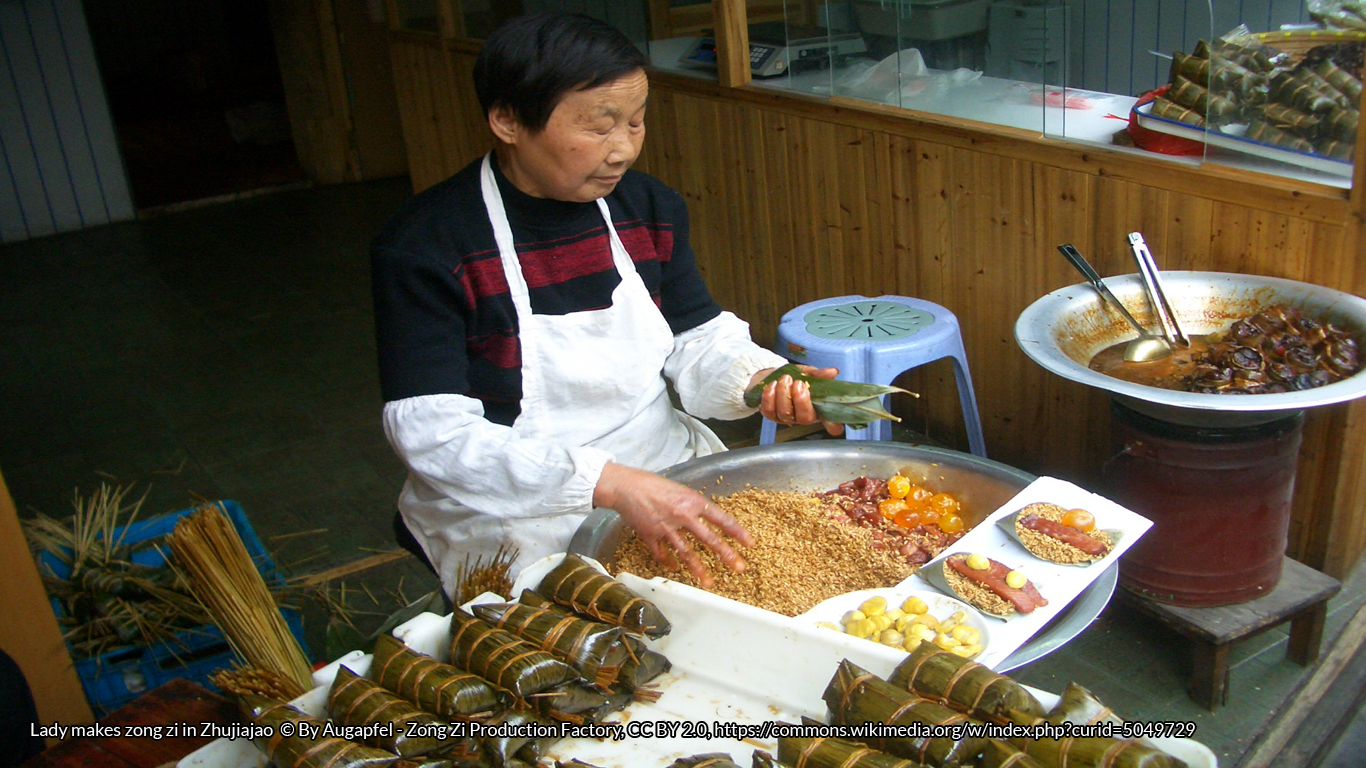 When I was a little girl, I used to watch with open-mouthed admiration and puzzlement as my mother prepared the ingredients for the making of zong zi (rice wrapped in leaf). She would make a variety of fillings: sweet chestnuts, dried shrimp, pork meat, and mushrooms. There would be a lot of soaking, stewing and boiling of the ingredients. Then, there was the rice. Washed, it was not the usual rice we use for eating at the dinner table. It was glutinous rice. While these ingredients were being prepared, she would soak the bundle of dried bamboo leaves with boiling hot water. Steeped in the water, the leaves magically would regain their lush greenness and the air would fill with the fragrance of something like jasmine tea. This fragrance would follow me until adulthood.

My parents would hang a bamboo pole across two chairs, prepare raffia string, and sit down to make zong zi. I sat next to them, watching their deft fingers shape the leaves into a cone, fill it with the rice grains and ingredients, and fold the leaf-cone into a tetrahedron (triangular pyramid). They then tied up the completed dumpling with the raffia string and make about five to eight dumplings per clusters.

They would make about five clusters, depending on their need. One cluster, they would keep for our own personal consumption. The other clusters would be given away as gifts to our close relatives.

That’s a lot of Fives: The Fifth Day of The Fifth Month

The Duan Wu Festival occurs on the fifth day of the fifth month on the traditional Chinese calendar. It is called – not surprising – the Double Fifth Festival. Likewise, the day is also known as Zhongxiao Festival in Chinese, commemorating filial piety. People in the West know it as the Dragonboat Festival, a name which countries like China, Singapore and Taiwan also adopt as the official English name for the holiday. Of course, on the day itself (or the month of the holiday), dragonboat races would be conducted. Dragonboat racing has even become a professional sport!

For Hokkien speakers, even of the diaspora in Malaysia, Singapore and Taiwan, Duan Wu Jie is also called ‘Fifth Month Festival’ or ‘Dumpling Festival’.

Nevertheless, the festival is held to commemorate the sacrifice and death of Qu Yuan who was regarded as a honest scholar-poet and patriot. He opposed the alliance with the powerful state of Qin and was exiled for his treason. When Qin captured his state of Chu, Qu Yuan drowned himself in the Miluo River. The local people, in their desire to save him, hurried out on their boats. When they couldn’t find his body, they threw sticky rice balls into the river so that the fish would not eat Qu Yuan’s body. The sticky rice balls were said to be the origins of zong zi.

There are two other people, Wu Zixu and Cao E, who are commemorated on the same day:

Wu Zixu was the Premier of Wu, acting as a general and a politician. One one occasion, after the new King of of Wu was instated, the king of a rival state — Goujian of Yue — sent a beautiful woman to the King of Wu to tend him. Wu Zixu saw through the treachery of King Goujian, and pleaded with the King to listen to him: that King Guijan was a threat to the state of Wu. Yet the King of Wu did not listen, and was instead immensely irked by his Premier’s warning and forced him to commit suicide. Wu Zixu’s body was then thrown in the river on the fifth day of the fifth month. As events unfolded, in the years after Wu Zixu’s death, King Goujian of Yue did indeed conquer the state of Yu. In places like Suzhou, Wu Zixu’s death is still commemorated in rememberence of his sacrifice and fidelity to both state and King.

Northeastern Zhejiang remembers the death of Cao E, daughter of a local shaman. While presiding over a ceremony commemorating Wu Zixu, the shaman fell into the river. Out of filial piety, Cao E leaped into the Shun River, to look for her father. Five days later, their bodies were found.

Zong zi come in many shapes and tastes. For Chinese of Southern China, zong zi are savoury, whereas Northern Chinese people tend to prefer their rice dumplings sweet. Northern-style zong zi are elongated, almost like leaf-wrapped parcels, while Southern-style tends to look like triangular pyramids (math teachers: this is a good way to teach shapes and geometry!)

Likewise, even the leaves used to wrap the dumplings are varied. Like tea leaves, they lend their distinctive aroma and taste to the rice. Lotus, banana, maize and pandan, to name a few. Boiled or steamed, the dumplings would perfume the air with their particular fragrance.

In countries with a significant Han Chinese population, the leaves are sold in bundles. These days, they come neatly packed in plastic. Dehydrated and dried, they look and feel crinkly to the touch. The trick is to pour hot boiling water and steep them in large basins. The leaves slowly take on the appearance and texture of fresh fronds.

Fillings are either salted egg, mushrooms, Chinese sausage and pork fat for the Southerners, or red beans and taro for the Northerners. With the diaspora being so spread out across the globe, zong zi have many names and variations. The Hokkiens in Singapore, Malaysia and Indonesia call it bakchang, the ‘bak’ meaning meat. The Nonya bakchang made by the Peranakan Chinese has minced pork mixed with candied winter melon (for its sweetness), roasted peanut and a spice mix. A particular favourite of mine, the jianshui zong (akaline dumplings) or kee chang, has the glutinous rice mixed with lye water. Chewy in texture, it is eaten with sugar or syrup as a dessert. The macang is commonly eaten by Chinese Filipinos.

The wrapping of zong zi is a family event where the entire family helps out. The skill of zong zi wrapping, a skill which I confess I am still learning (because I am such a klutz!), is taught from grandmothers to mothers to daughters.

For Duan Wu Festival this year, my girls and I are going to learn how to make zong zi. It is not just commemorating the death of a patriot, but it is also a time of family togetherness: making the zong zi together, laughing, catching up on family gossip and learning Chinese traditions all at the same time.