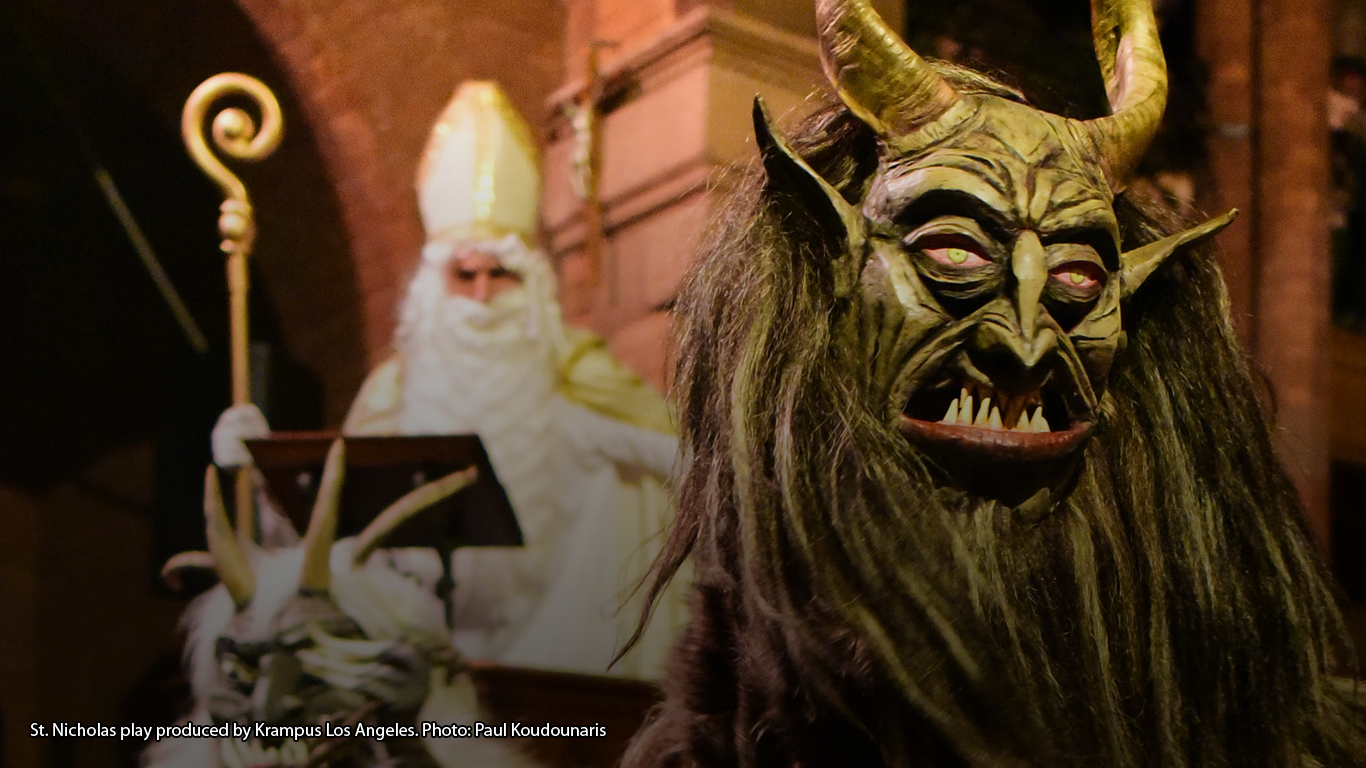 Relentlessly sunny and known for a love of trend over tradition, Los Angeles is an unlikely home to a new incarnation of the old Alpine devil.  It helps, perhaps, that make-believe is serious business in my town, and that it’s filled with creative people prone to see in an old tradition of folk Catholicism a revolutionary way to shake up the holidays.

That doesn’t really describe my relationship to the Krampus. Though I certainly have a foot in that world, it was my love of old customs and folklore that led to me publishing, in 2016, The Krampus and the Old, Dark Christmas, an exploration of the history and mythology of the creature.  However, my passion for the subject couldn’t really be contained in the book.  I wanted to somehow live it too.  And in Los Angeles, such absurdities tend to come true.

Already in 2012, while my book was still just a vague swirl of ideas necessitating travel to Europe, my friend Al Guerrero shared with me his idea of creating a Krampuslauf (Krampus run) on the streets of our city.  Our first discussion occurred via email as I was then in Austria researching my book. It was St. Nicholas Eve, 2012, and I was just returning from my first evening of rough-and-tumble with the devils of Bad Gastein, a mountain town an hour or so south of Salzburg famous as a bastion of Krampus traditionalism.  My fingers were still numb with cold as I checked my email in the hotel, and before the snow had melted from my coat, I was committed to the idea of an annual Krampuslauf in Los Angeles.

In 2015, Guerrero moved on to other endeavours, but the group we created, Krampus Los Angeles, continues today to organize events at which our troupe of three dozen or so performers in (mostly handcrafted) Krampus suits appear.  Our annual Krampuslauf draws an audience of about 500 Krampus enthusiasts to a downtown street to be chased by the devils. The troupe also appears at an annual Krampus Ball, a costumed blow-out with performances headlined by cult favourites, Krammpstein, musicians outfitted in horns, masks and furs performing songs by the band Rammstein reworked to Krampus themes.

If the latter doesn’t raise traditionalist eyebrows, I don’t know what would.  To be fair, there are similar events held in Europe called Krampuskränzchen, fund-raising parties for Krampus troupes featuring bands and indoor appearances by the troupes, but these too come under criticism from the more traditionally minded.

Krammpstein puts on a hilarious, theatrical show, and is one of the things that’s helped open doors to audiences who otherwise might never have taken notice of the Krampus.  But it would have felt incomplete to not pair uniquely LA offerings like this with other events providing a taste of something more authentic.

So, since 2013, I’ve also been offering lectures on the authentic folklore and history of the tradition, sometimes illustrated by surprise visits from performers costumed not only as the Krampus, but related folkloric figures. Ultimately, I created an extended bestiary of a dozen costumes to illustrate my lectures, figures later serving to round out our troupe’s numbers at events.

One of these figures that’s become a favourite is the Habergeiß, a sort of monstrous goat, usually considered demonic, occasionally benevolent, and always mischievous.  With its overlong neck and mechanically rigged jaw designed to lean over unsuspecting spectators and snatch away hats, the Habergeiß as a performed figure is mentioned in descriptions of St. Nicholas day plays dating back to the 1700s.

On and off over the years, we have also produced a version of the traditional alpine St. Nicholas play (Nikolausspiel) a primary source of the Krampus tradition. Regarded by UNESCO as part of Austria’s “Intangible Cultural Heritage,” and now produced only in a waning handful of mountain villages.  The play—one I cobbled together from my own translation of existing scripts—proved surprisingly popular with Los Angeles audiences eager to experience a something of how the Krampus was experienced in alpine villages of centuries gone by.

As our group grew, we began attracting attention via social media, including that of Martin Zehentner, a director at a Salzburg web design firm and part-time Krampus with one of Austria’s most established troupes, the Alt Gnigler. He and his sister had planned a 2013 driving tour of the Western United States, and his itinerary happened to include Los Angeles. LA troupe members were eager to soak in whatever wisdom he might offer from the Krampus Fatherland, and we persuaded him to meet for dinner while in town.

Zehentner recalls that his first online contact brought some misgiving about our endeavours, wondering if Americans would “really understand our traditions—or will the Krampus be reduced to a Halloween horror figure?” Most Austrians, he says, are generally unaware of America’s love affair with the Krampus, or if they are, might expect it to result in something closer to “slasher movies than anything genuinely linked to our customs.” When he mentioned our efforts to bring the tradition to the US, most in Alt Gnigler troupe members regarded it, he says, as “madness— but in a positive way.” By the end of our first dinner meeting, Zehentner seemed to be taking our invitation to return in authentic horns and fur more seriously than any of us anticipated.

In 2014, Martin Zehentner decided to return to Los Angeles to be part of the LA Krampuslauf. With costumes from the Alt Gnigler troupe, he, his sister Astrid, and her son Christoph, became the first Europeans to publically appear in traditional Krampus costumes in North America.

He wondered about how Americans would react to the switches. “In Europe we hear a lot of people in the USA, suing for peanuts. How will they react, even if we are touching them softly? So we just struck their legs softly and touched them on the shoulders. Snatching hats and caps, and putting those in the movable jaws of my mask was a lot of fun, and I think they really liked it. The switches aren’t the most important part of being a Krampus.”

Then, in 2015, the Los Angeles Krampuslauf was joined by 15 members of the Moor Pass (Krampus troupe) from Maishofen, Austria. Troupe leader Mike Kratzer was someone I had spoken with initially as a source for my book, but during our conversations, my invitation to join us in LA took root. He found “the idea of practicing our lovely old tradition in America a fantastic idea.”

The Maishofen troupe also remained relatively cautious about employing their whips, especially during an unannounced trek through Hollywood en route to the official Krampus run. But, “the people at the run itself,” he says, “were very enthusiastic, and we soon realized they could endure quite a few small blows.”

Since returning home, Kratzer has been contacted by a number of European groups interested in making a similar trip to LA, as have I, and we are hoping to continue this sort of exchange. In the meantime, we continue efforts in Southern California to provide the closest thing we can to the Old World Krampus experience, albeit one seasoned somewhat to local tastes.

Win a copy of The Krampus and the Old, Dark Christmas  by Al Ridenour

The wonderfully nefarious Al Ridenour has offered a copy of his intriguing book for a lucky #FolkloreThursday newsletter subscriber this month!

“With the appearance of the demonic Christmas character Krampus in contemporary Hollywood movies, television shows, advertisements, and greeting cards, medieval folklore has now been revisited in American culture. Krampus-related events and parades occur both in North America and Europe, and they are an ever-growing phenomenon.

Though the Krampus figure has once again become iconic, not much can be found about its history and meaning, thus calling for a book like Al Ridenour’s The Krampus: Roots and Rebirth of the Folkloric Devil. With Krampus’s wild, graphic history, Feral House has hired the awarded designer Sean Tejaratchi to take on Ridenour’s book about this ever-so-curious figure.

Al Ridenour has lectured on Krampus at the Goethe Institutes in Los Angeles. He became somewhat of an internet phenomenon himself due to the hilarious hijinks he coordinated with the controversial Cacophony Societies.”