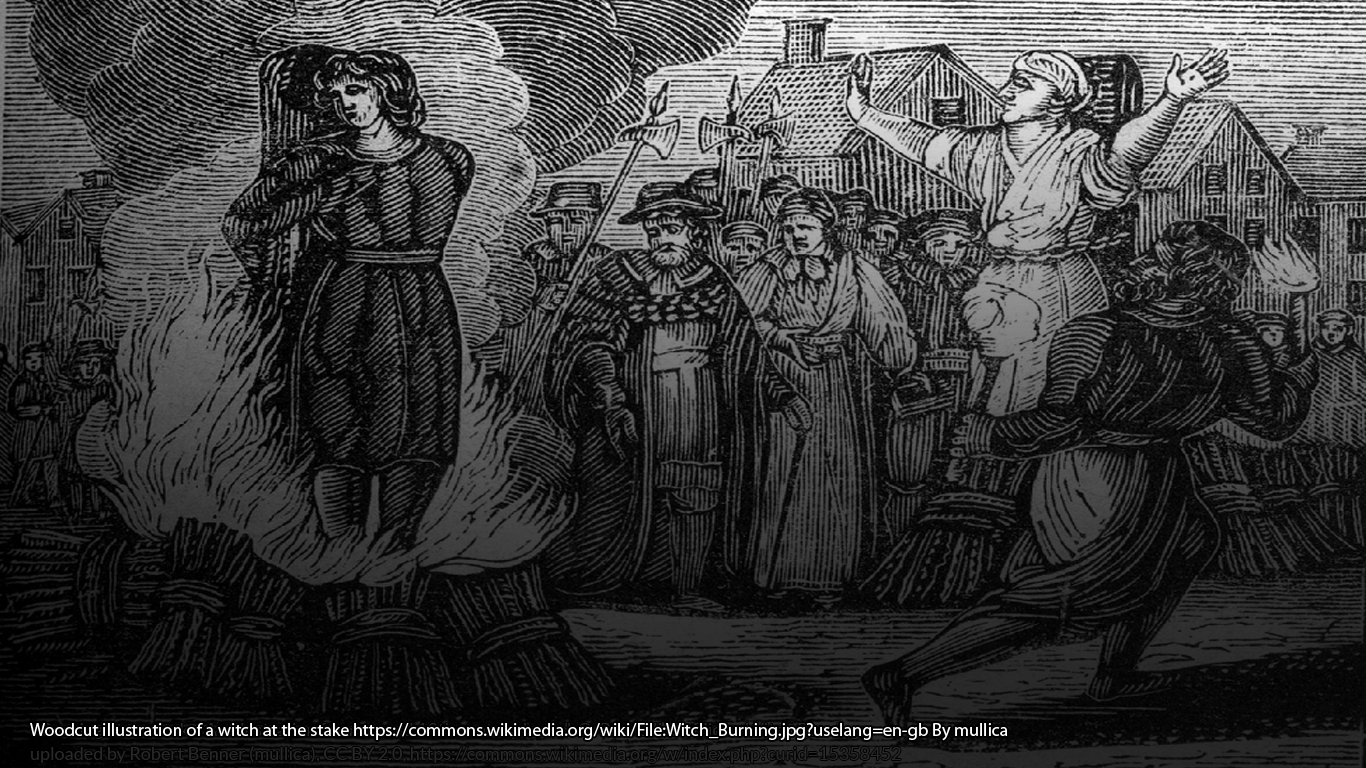 Nearly every place has its legends; stories that have passed from person to person, generation to generation, down to the present day. Some are based on facts and are further embroidered in the telling, while others seem to have come from next to nothing at all. Some, such as the tale that follows, cry out to be unpicked, and that was how I came to look into the mysterious case of the Witch of Scrapfaggot Green.

A couple of hundred years ago in the Essex village of Great Leighs, a witch named Anne Hughes was burned at the stake for the crime of bewitching her husband to death. Denied a Christian burial, her charred remains were buried at a place known as Scrapfaggot Green, and a large stone was placed on top to mark the site.

Still greatly feared, Anne’s resting place remained undisturbed for the next two or three centuries. During World War II however, the road that passed by the Green needed to be widened in order to accommodate the new Boreham Airfield. The work was not as careful as it should have been, and bulldozers displaced the stone, something that would have serious repercussions.

Strange events began to be reported soon afterwards:  The bells of the local church rang at midnight with no one there to make them. Sheep were found out of their fields with no sign of how they had got there. Strange noises were heard in the night. Painting supplies were moved from one room to another by unseen hands. Haystacks were blown around without wind. Scaffolding poles were scattered about a yard in an impossible fashion. Reputable folk who were known for their level-headedness and taking no nonsense were reporting these and other fantastical things, and the strangeness at Great Leighs showed no sign of abating.

In desperation, Harry Price, the distinguished paranormal expert was called in. The cause of the disturbances was glaringly apparent to this seasoned investigator, and he diagnosed a poltergeist, angered by the moving of the stone. The solution was, thankfully, simple: following Price’s advice the stone was replaced in its original position and the remains of the witch buried with due ceremony in the local churchyard. From that point on, the inhabitants of Great Leighs and nearby villages were disturbed no more, the witch once again at rest, as she remains to this day.

Although this is the basic legend of the witch’s stone of Great Leighs, there are many variations and ‘facts’ that both help and hinder when trying to unpick the fascinating tale. The most obvious place to start is to attempt to ascertain the identity of the witch in question. There was indeed an  Anne Hughes or Hewes accused of witchcraft; on 12 March 1621 Anne was before the Chelmsford Lent Session of the Essex Assizes on the following indictments:

Anne Hewes of Great Leighs, widow, on 24 June 1615 at Great Leighs, bewitched John Archer, who languished until 24 June following, when he died.

She was also guilty of bewitching Thomas Meade and Margaret Bright, both of whom were ‘wasted and consumed’ and who continued in that sorry state at the time Anne came to court. On top of that, Anne had also bewitched to death a cow belonging to Richard Edwards that was valued at 3 pounds.

It would seem a clear cut case and that our witch had been found, apart from two rather important details. Firstly, despite a hugely popular misconception, English witches were very, very seldom burned (in fact there are only 1-2 verifiable cases throughout the entire period of the witch trials where a witch went to the flames, and then it was for the crime of petty treason – killing her husband – rather than for witchcraft itself.) And perhaps the most pertinent to this case, Anne Hughes was acquitted. As with the case of Anne Wagg of Ilkeston in Derbyshire in 1650, modern sources delight in repeating how Hughes was hanged for her crimes; however, a perusal of the parish registers for Great Leighs reveal that in December 1669,  Anne Hues, widow, was buried.

Although Anne is therefore ruled out as the witch behind the disturbances, there is however another potential candidate. Elizabeth Brooke of Great Leighs was accused of witchcraft several decades previous, brought before the Chelmsford Assizes on 2 March, 1584. Her crimes had taken place in 1587, and in that year she was said to have been guilty of murdering Margaret Cleveland, wife of John Cleveland, by witchcraft. Elizabeth was also indicted for bewitching 6 cows and 6 horses belonging to James Holmested, a cow, 5 heifers and 4 hogs that were worth £10 belonging to James Spylman, 2 cows and 2 mares worth £5 of Thomas Cornshe, and some sows of George Fytche’s that were worth 40 shillings. All of the above animals died.

Not as fortunate as Anne Hughes, Elizabeth Brooke, who confessed to the second of the charges against her, was found guilty under the 1563 Witchcraft Act (which stated categorically that murder by witchcraft was a capital offence) and was condemned to die by the noose.

It is highly probable that these two ‘witches’ became conflated over time in local telling, and that the ever-popular witch trial tropes of fire and husband murder were added for good measure as the legend developed over the years that followed. Witches were known to be vengeful, spiteful creatures, and that one would return from the grave to wreak havoc on the descendants of her neighbours would have been easily believable both to their contemporaries and down to the present day.

What of the stone itself? Sources, such as they are, are decidedly vague on not only the location of the stone, but also what happened to it. Stones have been mentioned in relation to St. Anne’s Castle (a local pub that is also said to be haunted by the ghost of Anne Hughes), Boreham Airfield itself, and the aforementioned Scrapfaggot Green. Over the years it has become increasingly difficult to determine which stone was the ‘original’ and where it had originally been located.  Intriguingly, and perhaps most pertinent to the known facts, there is mention of a stone marking the place where an unlucky game keeper was murdered in Dukes Wood, resting to the south of Great Leighs and Boreham. The wood was cleared to make way for the building of the air-field in 1943 and it is possible that the airfield, the story of a moved stone and the local witch were further merged together over time.

Although the story has been much repeated, sources from the time these events were supposed to have occurred are scant indeed. None of the local papers seem to have reported the strange events,  or the re-interment of the supposed remains, a curious state of affairs for something so newsworthy The only known contemporary report was an article run by the Sunday Pictorial in October 1944, relating the strange events at Great Leighs and attributing the phenomena to the Scrapfaggot Green Witch. There was also potentially a cartoon in an American magazine from around the same time that gave a humorous account of what was said to have taken place.

Another source close to the time was Harry Price, the ‘ghost expert’ who had aided with the diagnosis of the problem and replacement of the stone. Price was in fact the founder of the National Laboratory of Psychical Research, the great nemesis of medium Helen Duncan, and most famed for his investigations into the hauntings at Borley Rectory. In his own account of what took place, Price was less forthcoming than he is often attributed to be; and in his 1945 publication Poltergeist Over England, states that:

‘The villagers declare that their misfortunes dated from the day when American bulldozers widened the road at Scrapfaggot Green, the centre of the village, thus displacing a two-ton stone that marked the remains of a seventeenth-century witch who had been buried (with a stake through her chest) at the crossroads there.  They asked me what they had better do about it.  I told them that if they believed the witch to be responsible for their troubles, the logical thing to do was to restore her tombstone to its original site.  This they did, ceremonially, at midnight on October 11-12, placing the stone east and west in the traditional manner.  The phenomena ceased.’

That real events were cobbled together in the public imagination both at the time and in the years that followed seems the most likely background of this compelling story, with witches and stones woven inextricably into the fabric of the history and folklore of Essex and ripe for the picking. As for the strange events reported in Great Leighs themselves however, things are less clear cut. Did things really happen as reported, with haystacks demolished and bells ringing unbidden? Or is there a simpler explanation? For along with the believers there are those who maintain that the ‘strange happenings’ were nothing more than villagers having a joke at the expense of a too-trusting reporter from the Sunday Pictorial.  In this telling, the supposedly ‘incredulous’ locals – and the Witch of Scrapfaggot Green – have the last laugh after all.

Here’s a little about Willow’s book:
The image of the witch – crook-nosed, unpleasant of disposition and with a penchant for harming her neighbours – is well established in the popular imagination. For hundreds of years the accusation of witchcraft has been levelled against women throughout the British Isles: such women were feared, persecuted, revered and reviled, with many ending their journeys at the stake or noose. Far from a mass of pitiable, faceless victims however, each case tells its own story, with a distinct woman at its heart, spanning the centuries down to the present. What did it really mean to be accused as a witch? Click the picture to get your copy now!