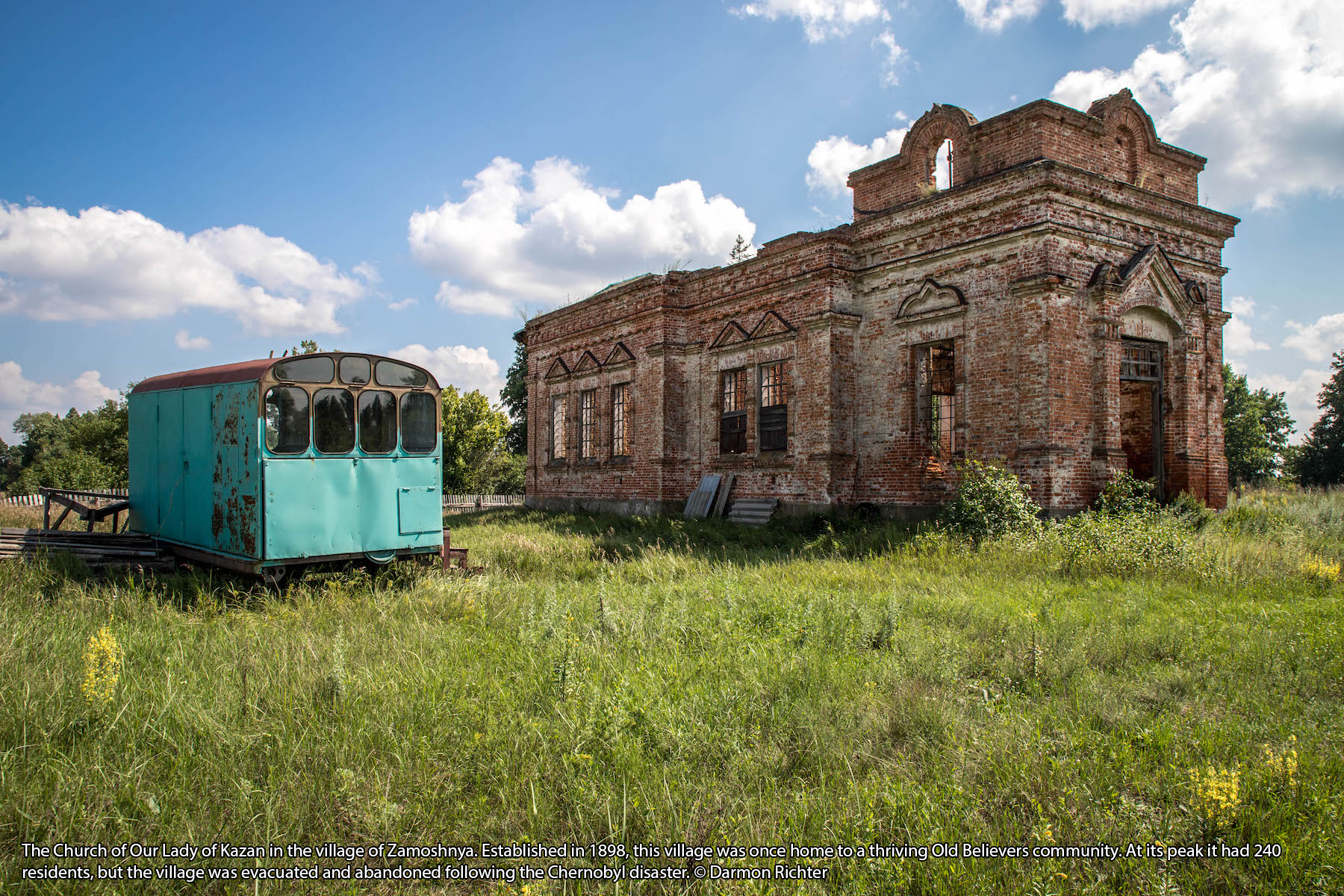 The effects of the Chernobyl disaster will endure for thousands of years to come. So how will that legacy be understood by future civilisations?

Something peculiar happened in Hamelin, Germany, in 1284 AD. We don’t know the details of the event, but we can trace the outline of the shadow it left behind. A church window installed in 1300 (since destroyed, but captured in a 1592 painting) showed an image of a piper, leading a group of children towards a gap in the mountain. In 1384, an entry in the Hamelin town chronicle noted, “It is 100 years since our children left.”

Cherobyl: A Stalkers Guide by Darmon Richter is now available from the publisher.

“While the Pied Piper of Hamelin is undeniably a fairy tale,” writes Al Ridenour, “it’s uniquely grounded in real-world specifics.” Factual details of the event may have been lost, but folktales have evolved in their place, and have survived over 700 years to preserve a record of this town’s trauma. Another 700 years from now, what stories might communities tell to explain the legacy of Chernobyl – where more than 100,000 people were evacuated from their homes, and a poison left in the earth will endure for thousands of years still to come?

The Chernobyl region has historically been home to numerous different systems of belief. The town of Chernobyl, from which the region takes its name, was a major centre of Hasidic Judaism by the 18th century – though that culture was largely lost, when wartime Nazi occupation brought the Holocaust to these lands. Other inhabitants were Catholic, or Eastern Orthodox Christian. Some rural communities practised the rites of the Old Believers: a splinter sect that formed following a 17th-century schism in the Orthodox Church.

When the Soviets decided to construct a nuclear power plant here, in operation from 1977, two worlds collided in this marshy, rural corner of northern Ukraine. They built a state-of-the-art scientific facility dedicated to splitting the atom, along with its new workers’ city – Pripyat, a modern and atheistic ‘atomgrad’ – while all around lay old communities, villages of wooden houses where people still practised old ways of life, and religions that were older still. When a malfunction at the power plant in 1986 caused a reactor meltdown, Pripyat, the city of science, was lost… and older communities would make sense of the disaster on their own terms.

An oft-cited example of post-disaster myth-making concerns a Biblical prophecy, from the Book of Revelation: “The third angel blew his trumpet, and a great star fell from heaven, blazing like a torch, and it fell on a third of the rivers and on the springs of water. The name of the star is Wormwood. A third of the waters became wormwood, and many died from the water, because it was made bitter” (Revelation 8:10–11, King James Version). After 1986, many Christians were reminded of this passage, as the word ‘Chernobyl’ itself comes from a local name for the wormwood plant, which grew profusely in the area.

One local priest – Archimandrite Sergius, rector of the Church of the Prophet Elijah in Chernobyl town – reported a vision he had observed ten years earlier: “Many locals saw a cloud fall to the ground so that the outline of the figure of the Blessed Virgin Mary became clear on it… In her hands She held bunches of dry wormwood, which we call chornobyl. The Mother of God dropped wormwood over the town… Only years later, after the accident, did it become clear what this sign foreshadowed.”

The fact that Halley’s Comet, another traditionally-prescribed omen of doom, had passed by the earth on its 76-year orbit just days before the disaster, was taken by some as yet more evidence that this event had been preordained.

After the disaster, Soviet authorities evacuated all settlements in a 30km radius of the power plant, and created in their place a tightly-controlled ‘exclusion zone.’ However, Chernobyl town itself, despite being just 14km (albeit, downwind) from the plant, never showed any signs of radioactive contamination; and so it served as an administrative hub first for the clean-up operation, and years later, for the subsequent tourism industry too. Amongst local Christians it was sometimes said that the town had been spared as reward for its enduring faith.

Far from discouraging the growing folk narratives that linked the disaster to Biblical prophecy, the government-backed administration of the Chernobyl Exclusion Zone seemed almost to embrace them. (After years of Soviet-imposed state atheism, perhaps such open expression of religiosity felt like a gesture of independence in itself.) On the 25th anniversary of the disaster, a new monument called The Third Angel was officially unveiled in Chernobyl: an angel blowing a trumpet, in direct reference to the Biblical prophecy. In Chernobyl’s church, meanwhile, a new icon appeared: it depicted the disaster clean-up crews (the ‘liquidators’) stood before Christ, who holds the scroll of Revelation. Behind them is painted the destroyed nuclear power plant, while Halley’s Comet burns as a star in the heavens above.

In the three decades since the disaster, Chernobyl has already proven a wellspring of modern myth-making. However, the scars of this event will persist, and thereby invite explanation, for many more generations to come. In 2016, a metal sarcophagus called the ‘New Safe Confinement’ was installed over the power plant as a protective shelter, so that the destroyed reactor inside could be safely dismantled. This shelter was designed to last a hundred years, which means it will continue to dominate this landscape even after all those working on it now are dead and gone. However, once the old reactor is dismantled, its radioactive contents will then need to be stored somewhere.

Nuclear refuse from sites like Chernobyl will remain hazardous, in some cases, for tens of thousands of years into the future – that’s greater than the total span of all recorded history, more than double the elapsed time between us and the ancient Sumerians. It is therefore impossible to predict which will endure the longest: our current scientific understanding of this radio-ecological disaster, or, like the story of the Pied Piper of Hamelin, perhaps some folkloric interpretation of the event will eventually outlast its factual record.

An entire field of science, known as ‘nuclear semiotics,’ is dedicated to exactly this problem. Various countries are already developing deep time nuclear waste repositories, where our toxic leftovers can be stored, underground, until their radioactivity decays to non-hazardous levels; but the question asked by the nuclear semioticians, is how to communicate that risk in the meantime. What words, symbols or signs of warning can we create, that will continue to be understood across the millennia, by cultures, and in languages, that we cannot yet even imagine? Myth and folklore, some have theorised, might offer a potential solution.

While creating their nuclear repository under Yucca Mountain in the 1980s, the U.S. Department of Energy invited future-proofing suggestions from a team it called its ‘Human Interference Task Force.’ One proposal, by Françoise Bastide and Paolo Fabbri, involved breeding cats that changed colour in the presence of radiation. These human companions – dubbed ‘ray cats’ – would become like living Geiger counters, and hopefully inspire myths and fairy tales capable of outliving entire civilisations. Another suggestion, by the linguist Thomas Sebeok, outlined the establishment of an ‘atomic priesthood’: a pseudo-religious order that might preserve radiation warnings in the form of ritual knowledge and practice, passed down from one generation to the next. In both these proposed scenarios, it was assumed that oral folk traditions might very well outlive all our scientific knowledge.

At Chernobyl, it didn’t take long for folk narratives to evolve to make sense of events that for many seemed incomprehensible – the invisible poison blighting these fields and pastures. But the Chernobyl story has thousands more years of retelling still ahead of it; and myth, as we have seen, has a tendency to outlast knowledge. Throughout many cultural traditions there are stories of places that mustn’t be disturbed: from the Nordic barrows guarded by undead draugar, to the fabled curse on Tutankhamen’s tomb. Perhaps some day, if and when our own civilisation fades to leave only ruins and obscure technological artefacts, then the toxic sumps of our nuclear waste repositories, and the exclusion zones left behind in the wake of our mistakes, might yet be remembered in the form of cautionary folklore.

Darmon Richter is a British researcher who is fascinated by contemporary mythology, and Modernist architecture. He feels most at home in the places where these themes collide, and currently leads tours to extraordinary places in seven countries and one post-Soviet frozen conflict zone. After making roughly twenty trips into the Exclusion Zone in Ukraine, his debut book – Chernobyl: A Stalkers’ Guide – paints an intimate portrait of the Chernobyl region and its inhabitants, three decades on from the disaster. Visit his website or follow him on Twitter.