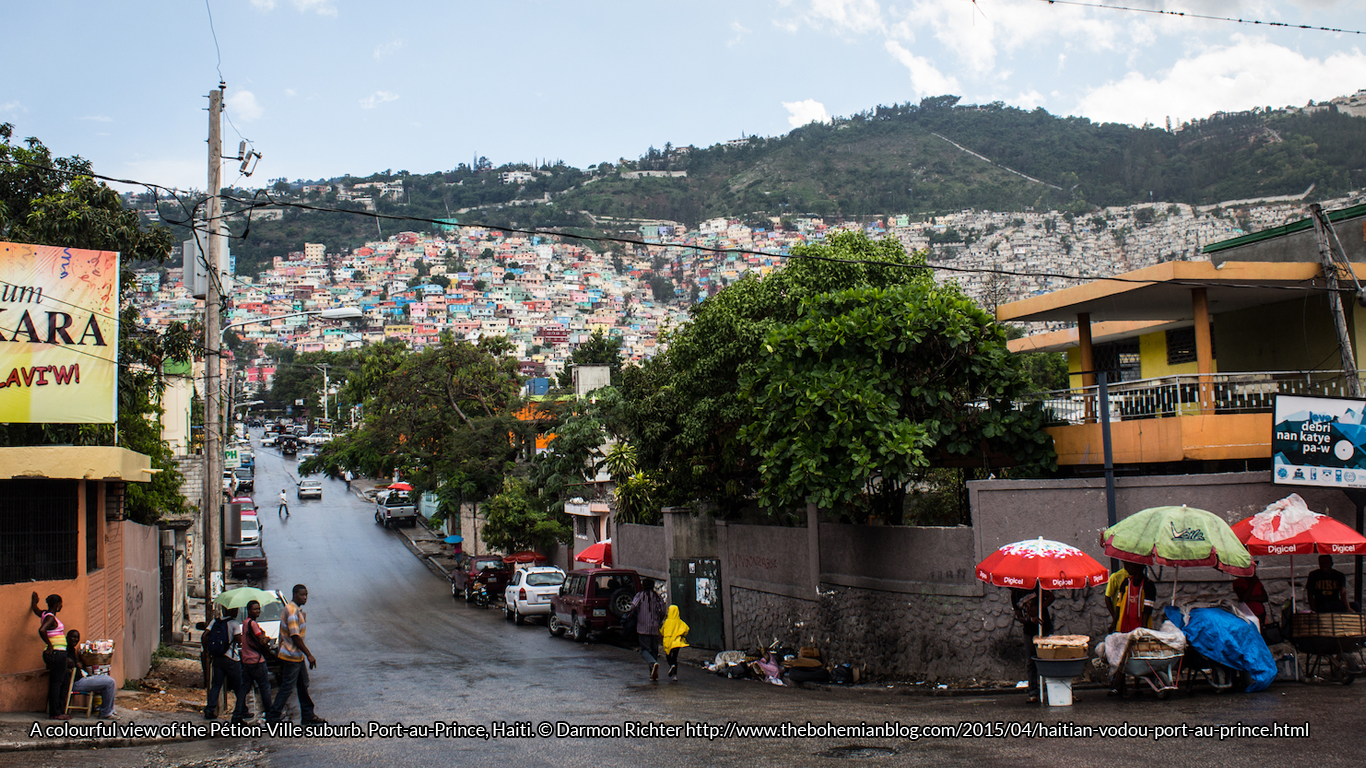 In the beginning there was Damballa: the sky serpent. Damballa created the mountains, he created the valleys and oceans. He created the rocks, and set the stars alight. When Damballa shed his skin, rain fell from the sky. The serpent’s children, the Loa, were pleased with what he provided – and so they worshiped him. In the Haitian Vodou pantheon, Damballa – the ‘Sky Father’ – rules over mind and intellect; he is the keeper of cosmic balance. Over the millennia however, Damballa would assume other faces too. He manifested as Moses, who could turn a staff into a serpent; and in the form of Saint Patrick, Damballa drove the snakes out of Ireland.

When the traditional Vodun religion of West African slaves, who mostly originated from areas around the Congo and present-day Benin, collided in the Caribbean with the incoming Christianity of Spanish and French colonists, Haitian Vodou was born. It is an ontology inspired by correspondences, not conflicts, and it survives to this day largely due to its ability to map itself onto new worlds and emerging cultures. It is often said that Haiti is “70 percent Catholic, 30 percent Protestant, and 100 percent Vodou.”

The cultural place that Vodou occupies today is complicated, and at first glance, almost invisible. Take a walk through the streets of the Haitian capital, Port-au-Prince, and you might spot occasional clues: the sequin-studded effigies sold to tourists at the Marché en Fer; the Vodou symbols – or ‘veve’ – sometimes scrawled above doors, or down backstreet walls. Trinkets and graffiti aside however, one could almost believe that Haitian Vodou was extinct…while Christianity announces its presence with an explosion of pomp and colour. Technicolour messiahs appear painted onto the side of buses; streets are lined in handmade signs for the ‘Jesus Saves Bakery,’ or the ‘Christ-is-Kind Pharmacy.’

Real Vodou rarely exposes itself in public. Religious ceremonies have become the target of hate crimes, some say, while racist stereotyping of traditional African practices has served to push modern Vodou further underground.

“The best thing that ever happened to racism is Vodou,” claims the anthropologist Ira Lowenthal. “They made up their stories about it and their stories confirmed every prejudice of every white person in the world.” A slew of derogatory roles in Western cinema would illustrate her point: from James Bond’s afrophobic Live and Let Die, to countless misappropriations of the Haitian zombie myth.

In response, many commentators have shifted their focus instead to reveal the lighter side of Vodou. In a breathtaking series of images titled ‘Defiant Rite,’ the photographer Troi Anderson portrayed Haitian Vodou as a beautiful tradition of dance and life and movement to which The Huffington Post concluded: “Simply speaking, Vodou rituals consist of music, rhythm, theater and dance.”

They assert: “In reality, there are typically no dolls, no animal sacrifices, no dark magic”; and while their intention of dispelling negative (and often racially charged) stereotypes is noble, the evidence in Haiti, however, does not always bear out their claim. Because Vodou is both the light and the darkness… and one doesn’t have to stray far from the main boulevards of Port-au-Prince to stumble across the latter.

In January 2010, Haiti – already the poorest country in the Western hemisphere – was rocked by a devastating earthquake. Hundreds of thousands of Haitians lost their lives; and in Port-au-Prince alone, one quarter of a million homes were destroyed. The survivors, many now without shelter, food or clean water, set out en masse to find new places to live. The golf course at Pétion-Ville grew into a city of tents, while others made their way to the Grand Cemetery.

Le Grand Cimetière was opened in the early 19th century, a French-built necropolis featuring rows upon rows of sturdy, brick tombs and mausolea. After the earthquake these structures had often fared better than the residential districts of Port-au-Prince; and so many of the dispossessed moved into the graveyard, breaking open tombs to find shelter inside.

Haitian Vodou is a religion that finds deep significance in the ephemera of death: with bones and mortal remains. Le Grand Cimetière, therefore, was already considered a powerhouse of Vodou energy, a place with strong connections to the spirit world. With the sudden influx of living souls – desperate people in dire need of spiritual sustenance – this city of the dead became a bustling Vodou settlement.

Walking through the cemetery now, one is suddenly immersed into another world. Here are all the things that you won’t see on the streets of the capital; the secret face of Haitian Vodou, driven out of hiding by fear and desperation.

In a tree near the entrance to the cemetery, dolls and human skulls are nailed onto the bark. Tombs stand broken, converted to sleeping cells while rags and bones – the previous occupants – lie scattered in piles outside. Beneath a canvas awning in the heart of the necropolis, a makeshift church is in session; the congregation, dressed all in white, rock and sway and moan with the wind.

Then there are the Loa shrines. Many of Damballa’s children have their altars at Le Grand Cimetière. Baron Samedi, leader of the ‘Guédé’ (the Loa of death and fertility) has a plain black cross, where worshippers pour him gifts of peppered rum. Not far from here is the altar to Baron Kriminel. The cruelest of the Guédé, Baron Kriminel is the spirit of the first murderer and he serves as their enforcer. His preferred offering is a black chicken, doused in oil then set alight; his altar here is blackened by fire, a single feather stuck to the charred residues.

It is a difficult place to visit. This level of poverty, of desperation, calls out the privilege of the tourist in ways that are often profoundly challenging. Yet the Haitians themselves are hospitable at all times; warm and receptive, even in their most disadvantaged moments.

The Vodou they practice is a celebration of light – of movement and music – but it is also found in the darkness: a full spectrum, from the grave to the sky above. To show one extreme without the other would be to rob practitioners of their dualistic nature, as if to assume that Haitian Vodou was something one could explain in a single sentence. But Vodou is more than the sum of its parts. More than ritual, more than stories, it is a way of being in the world; and it is as complex, as multifaceted, as are the Haitians themselves.

Darmon Richter is a British researcher who is fascinated by contemporary mythology, and Modernist architecture. He feels most at home in the places where these themes collide, and currently leads tours to extraordinary places in seven countries and one post-Soviet frozen conflict zone. After making roughly twenty trips into the Exclusion Zone in Ukraine, his debut book – Chernobyl: A Stalkers’ Guide – paints an intimate portrait of the Chernobyl region and its inhabitants, three decades on from the disaster. Visit his website or follow him on Twitter.