The cursed painting is an enduring urban legend that continues to have the ability to scare us, and also makes a good tabloid news story. Blamed for bad luck, fires, or just falling off the wall in the middle of the night, they show no sign of going away. Here are some examples that might have you covering that old family portrait with a dustsheet before you go to bed.

Scooby Doo and the rest of Mystery Inc. walk down a dark corridor lined with ancient portraits. As they pass the eyes of the portraits follow their progress. This is an enduring childhood memory and my first exposure to the unnerving painting, an idea that is behind a lot of cursed artworks.

There’s no denying paintings, particularly portraits, can be unsettling, especially if they have unclear histories.

The unnamed canvas in Philip Solomon’s possession shows an innocuous moorland castle, yet it is surrounded by its own folklore, with stories of people fainting and dogs being traumatised.

As with many cursed paintings the landscape did not want to stay mounted on the wall. Solomon, a psychic, claims that seeing hidden details in the painting can reveal previously unknown clairvoyant abilities. After he put the artwork on Facebook, people contacted Philip saying they saw Vikings, caravans and skulls hidden in the details. Was this a sign of seeing beyond the veil? In this case the name of the artist has been lost in time. In other examples the painter is known.

Man Proposes, God Disposes by Edwin Landseer (top image) hangs in the University of London’s Royal Holloway, and is temporarily covered with a Union Flag when student examinations are held in the gallery.  A dark painting of nature consuming man’s achievements, it shows polar bears scavenging the wreckage of a Polar expedition. Blood is sprayed across ice. One polar bear rents apart a sail and the other gnaws a human rib. While certainly an unsettling subject, the urban legend surrounding the painting seems to date to the 1970s and is linked to a student’s rumoured suicide.

The story goes that the student stared at the painting, wrote ‘The polar bears made me do it’ on their exam paper, and took their own life. Though the evidence for the story is scant, it has long been believed to be bad luck to sit next to the exposed painting during examinations.

While some artworks such as the Edwin Landseer are famous in their own right, others become famous because of their notoriety, such as The Hands Resist Him. Bill Stoneham based his 1974 painting on a photograph of himself and a playmate, recasting his childhood friend as a doll. Behind them is a glass door with disembodied hands emerging out of the gloom. Initially purchased by John Marley, an actor from The Godfather, it was only a few years later when the painting acquired a cursed reputation. Henry Seidis, the critic who gave The Hands Resist Him its first review, died in 1978, Feingarten, the gallery owner who first exhibited the artwork died in 1981, and Marley died in 1984.  The painting disappeared from view for many years before appearing once more on eBay, with a very evocative description (sic);

“when we received this painting, we thought it was really good art. A ” picker ” had found it abandoned behind an old brewery. At the time we wondered a little why a seemingly perfectly fine painting would be discarded like that. (today we don’t !!! ) one morning our 4 and 1/2 year old daughter claimed, that the children in the picture were fighting, and coming into the room during the night. Now, i don’t believe in ufos or elvis being alive, but my husband was alarmed. To my amusement he set up a motion triggered camera for the nights. After three nights there were pictures.the last two pictures shown are from that ‘stakeout’. After seeing the boy seemingly exiting the painting under threat”

This became a meme, at a point in time where the BBC felt it necessary to explain to the general public what eBay was.

A lot of the power with cursed paintings is the reactions that they accrete to them, and because they aren’t tied to a geographic location this can happen at a distance.  Soon people were responding with strange occurrences as they viewed The Hands Resist Them including becoming ill, experiencing blackouts, children screaming, and viewers feeling an unseen presence. The painting was purchased by gallery owner Kim Smith and is now kept in storage. This echoes another pre-internet cursed painting flap (in the fortean sense of the word). 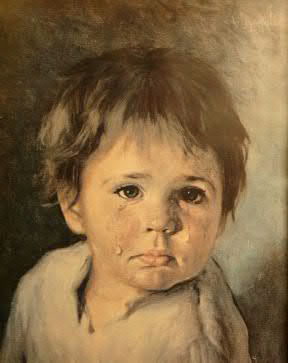 An example of a Crying Boy print by Giovanni Bragolin Source

The Crying Boy paintings seemed to be everywhere in the early eighties. A very odd subject for a domestic artwork they showed, as the name suggests, a crying child. The story first emerged in 1985 in The Sun, under the headline ‘Blazing Curse of the Crying Boy’.  Following a chip pan blaze that gutted the downstairs of their home, Ron and May Hall found the Crying Boy print unscathed. As David Clarke points out in his Fortean Times article, chip pan fires were not unusual, but when Ron Hall’s firefighter brother passed on that his station chief knew of numerous other fires where the Crying Boy print remained unscathed, the story turned from local news to national interest.

The Sun editor Kevin Mackenzie is credited with the Crying Boy story, and soon the cursed painting was levered for sales. Reports flooded in from readers owning the jinxed print. Stories from Yorkshire and Nottingham were reported of further house fires where the Crying Boy survived.

Other cursed effects emerged, but many of the stories focussed around fire. Most blazes featuring Crying Boy paintings were known to be caused by human error. This still didn’t explain why the paintings survived, particularly as they were not all the same Crying Boy, or by the same artist. Searching for an occult angle, The Sun approached Roy Vickery of The Folklore Society who suggested the artist could have mistreated the child model, and the fires were revenge.  The fire service had their own explanation. The prints were on high density hardboard that was hard to ignite. This did not stop The Sun continuing to fan the flames. The paper ran a campaign collecting the paintings from readers, at the paper’s cost, to burn them and ‘end the curse’. After collecting 2,500 copies, The Sun, being The Sun, burnt them in the most tabloid way possible, getting ‘page three girls’ to feed them into a bonfire.

Stories surrounding cursed paintings arise for many reasons. Sometimes because of sales (whether of the painting itself or newspapers), sometimes through bad history. Some might not have an obvious explanation. Painting is an act of creation that few people can master. As with many talents there is a magic, and where there is magic maybe there are curses.

Update: The Crying Boy painting resurfaced again recently in an inews article by Ben Alden Falconer. On moving into a new house he found that the former owner had left behind a certain familiar painting. Even after all these years The Crying Boy still has the power to unnerve and unsettle.
Thanks to David Sutton at Fortean Times for his help while I was researching this article.

Carney. A, March 2018, ‘The Curse of the Crying Boy Painting’, Exemplore

Lockley. M, October 2017, ‘The ‘haunted’ painting that top medium claims can reveal if you have psychic powers’, Birmingham Mail