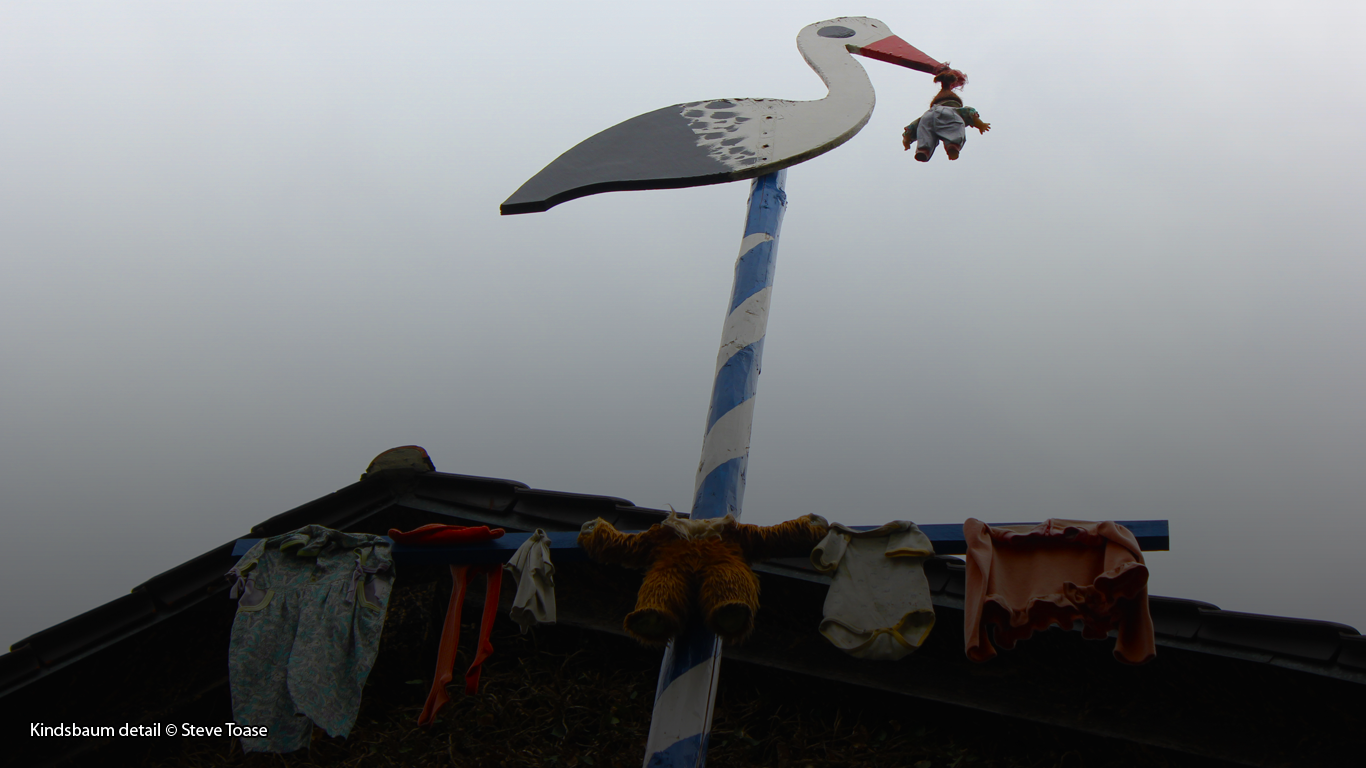 Maypoles are often seen as a quintessentially English tradition, yet in Bavaria the raising of the Maibaum (or May Tree) is also an important event, and it is not the only time a tree is hefted aloft in celebration.

If I look out of my kitchen window I can see a large bark stripped tree, about thirty metres in height, held in place by vast metal brackets. It is topped by a floral crown and decorated with wooden models of barns, JCB excavators and local born ‘bayerische Hercules’ Hans Steyrer.  This is the Maibaum for Allach, the district of Munich where I live. At the beginning of May, trees like this are raised throughout Bavaria (most decorated in the Free State of Bavaria’s distinctive blue and white).

There are many traditions and rituals surrounding the Maibaum. One of the most important is the attempt by Burschenvereine (the groups responsible for the cutting, decoration and raising of the Maibaum), to steal the trees of neighbouring areas. If they are successful the tree will be ransomed back for beer and Brotzeit (a meal).

To try and prevent theft and subsequent ransoming, a watch will be established by the residents of a village or district. If a theft is successful that is not the end. It is not unheard of for the thieves to be relieved of their prize by a third party from another district, although I’m not clear who pays the ransom to who in this situation.

In 2017 the village of Neufinsing teamed up with residents from Hohendilching and Ismaning. Acting on a tip off they stole the maypole due to be raised in Viktualienmarkt, in the centre of Munich. After sneaking into the warehouse, they loaded the Maibaum onto a trailer, dragging it through the night back to Neufinsing.

Following the raid they met with the Munich Brewer’s Club (sponsors of the Viktualienmarkt Maibaum) to negotiate. While they were unsuccessful in arguing for a permanent private table at Oktoberfest, they did secure two meals and plenty of beer.

The most audacious theft sounds like something from a James Bond script. In 2004 the guards for the Zugspitze Maibaum returned to where they had buried the tree in a snowbank for safe keeping  and found a large hole.  In a confession to the newspaper Süddeutsche Zeitung the thieves admitted that they had used a helicopter to carry away the 20m high, 800kg tree. According to a WSJ article the starting point for the ransom negotiations was 200 free meals and litres of beer, accompanied by ten season ski passes. The thieves, nicknamed the Rentnerbande or retirement gang because of their age, were eventually negotiated down to 150 meals in the resort restaurant.

While this is the highest theft, the tallest Maibaum was recorded in the Tirol township of Mariastein.  In 1974 they succeeded in erecting a tree 78 metres in height.

Once all the Maibaüme have been returned and 1st May arrives, the trees are raised (by crane in Munich, though in the villages they still use manpower) and celebrated with dances, traditional costumes and the drinking of Maibock, a dark beer specially brewed for the occasion each year.

To cap off the festivities the Maibaumkraxler, or May tree climber, compete to scale the Maibaum as fast as they can and put the wreath in place at the top of the tree.

May Day is not the only event in Bavaria celebrated with colourful trees.

When a couple are newly married their friends will conspire to raise a Kindsbaum (child tree), also known as a Hochzeitbaum (wedding tree).  In many ways these echo the Maibaum. They are painted, normally in Bavaria with blue and white, and often feature a wreath. There are, however, some key differences.

While Kindsbaum are also decorated with objects these tend to be baby clothes, pushchairs, baby toys and bottles. A stork is fixed to the top (in some cases holding a baby in a sling). A plaque is nailed  to the pole, normally in the shape of a heart. This in turn is decorated with the names of the couple and a poem. The poem is to celebrate their marriage, but also to lay down a challenge. The couple have a year to have a child, or be expecting. If a year passes and no baby is on the way, then the couple must pay a forfeit, providing beer and a meal for their friends.

As can be seen from the attached photos, when a child is born and the forfeit averted the baby’s name is attached to the Kindsbaum.

While it is unclear how serious the pressure to have children is taken in contemporary Bavaria, Kindsbaum are still fairly common and can often be seen in gardens, yards and even on balconies.

Although this article has focussed on Bavaria there is a similar tradition in the Rhineland where men express their love for young woman by anonymously placing a birch tree covered in colourful streamers outside her house. Like the Kindsbaum these arboreal love tokens will often have a heart shaped plaque attached to them, this time bearing the woman’s name.

As with many of these types of traditions pinning down the origin is difficult. Some claim they date back to Germanic pagan antiquity, while others claim a much later date. There is evidence for Maibaüme in 16th century illustrations, for example by N. Meldemann and J.M. Gogel. What is clear is that Maibaüme and Kindsbaüme are both living traditions still celebrated with much enthusiasm and beer!